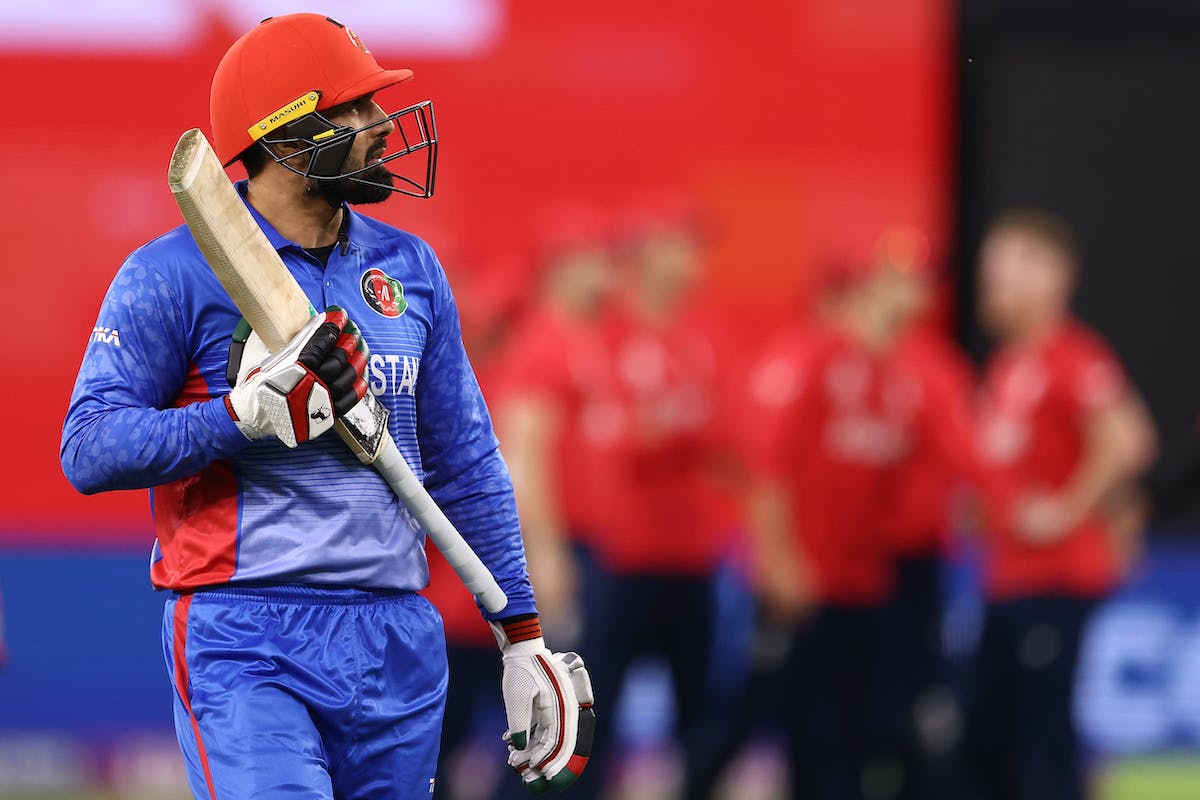 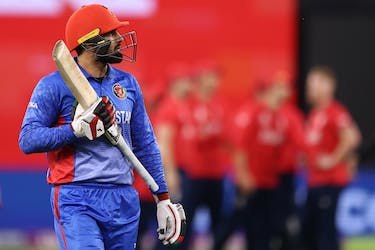 There is an old connection between Afghanistan and Ireland cricket. Both sides start rising around the same time - around 2010. They gained the Test status on the same day. T20I bilaterals don’t carry much significance but these two sides face each other nearly every year.

Afghanistan have a far superior record, winning 16 of their 23 T20Is against Ireland. But if the previous encounter between them is any hint - the five-match T20I series in Ireland which the hosts won 3-2 - Ireland is not a pushover in helpful conditions. Conditions where there is help for the pacers.

The Melbourne Cricket Ground will offer that help to the Irish when they meet Afghanistan in their third Super 12 contest in this World Cup. The ‘G’ has shown immense zip for the pacers both in terms of bounce and lateral movement. That was at the helm of Ireland’s historic win over England in their previous game, which will serve as a huge confidence booster ahead of the Afghanistan tussle. Under similar conditions in Perth, the Afghans were rolled over by the England bowlers. That is going to be the key for Ireland, a retort to Afghanistan's wizardry with spin.

Both Ireland and Afghanistan batters have grim numbers versus left-arm pace. In T20Is since 2021, their top seven average only 22 and 22.3 respectively while facing the left-arm pacers. What makes this match-up interesting is the fact that both sides have a left-arm pacer up their sleeves - Joshua Little for Ireland and Fazalhaq Farooqi for Afghanistan. In two matches at MCG in this World Cup thus far, left-arm pacers have 16.4 runs per wicket, the best bowling average among all bowling types. 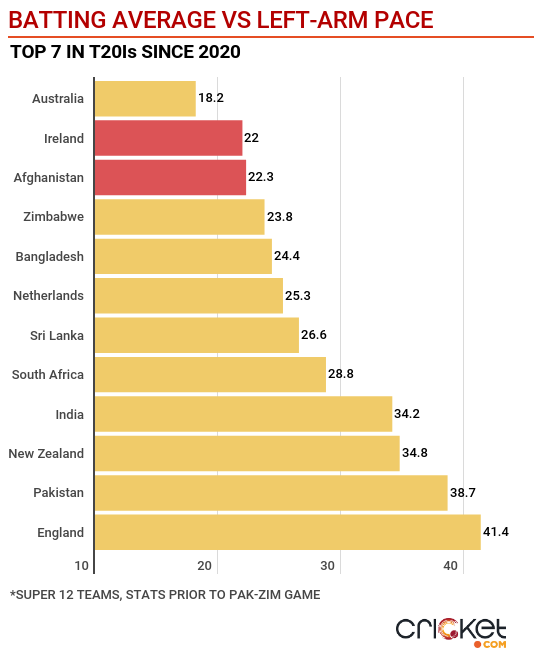 Hence, the onus lies on the opening pair to negotiate that threat. The inconsistent opening pair of both sides adds further to the narrative.

Stirling averages 21.2 this year, his lowest T20I average in the last six years. Balbirnie averages 19 in his last 15 T20I outings. From the Afghan camp, Zazai averages 18.6 in his last 10 innings. Gurbaz has only one 20+ score in his last five innings. You get the gist, right? It is going to be fun to watch the opening pair of both sides facing left-arm pacers under helpful conditions for bowlers.

Ireland need to be wary of Afghan’s spin threat

Ireland’s struggle against spin is what gives Afghanistan an outstanding record in the head-to-head battle. Overall, they average only 16.8 runs per wicket at 7.2 runs per over against Afghan spinners. The numbers of the current Irish batters against spin paint the picture. 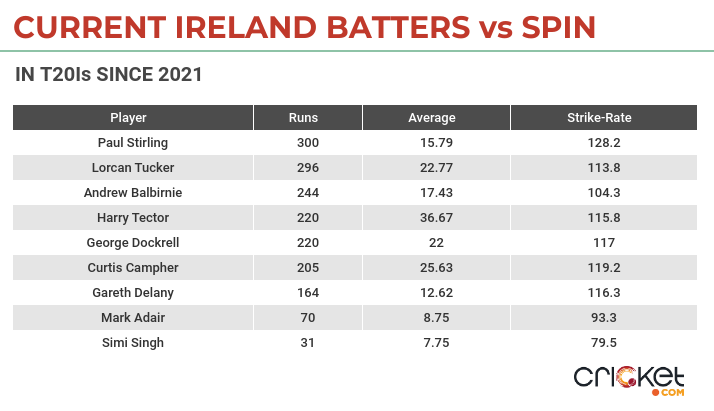 Only Harry Tector averages in the 30s but at an underwhelming strike-rate. No one has a strike-rate of 130 or more.

Can Rashid get among wickets?

And here comes the inevitable limelight on Afghanistan’s MVP, Rashid Khan. With an excellent record against Ireland under his belt (37 wickets at 11 runs apiece, economy 6.4), the leg-spinner must be smacking his lips ahead of this fixture.

However, Rashid’s dip in 2022 will keep Ireland hopeful about tackling him. Despite going at a  healthy rate of a wicket per match, his average of 23.9 in 2022 is his worst in a year since his sophomore year in 2016. The economy rate is intact which is a sign of the batters not attacking him enough. Batters have attacked only 43.3 percent of Rashid’s deliveries in 2022, the lowest in a year. 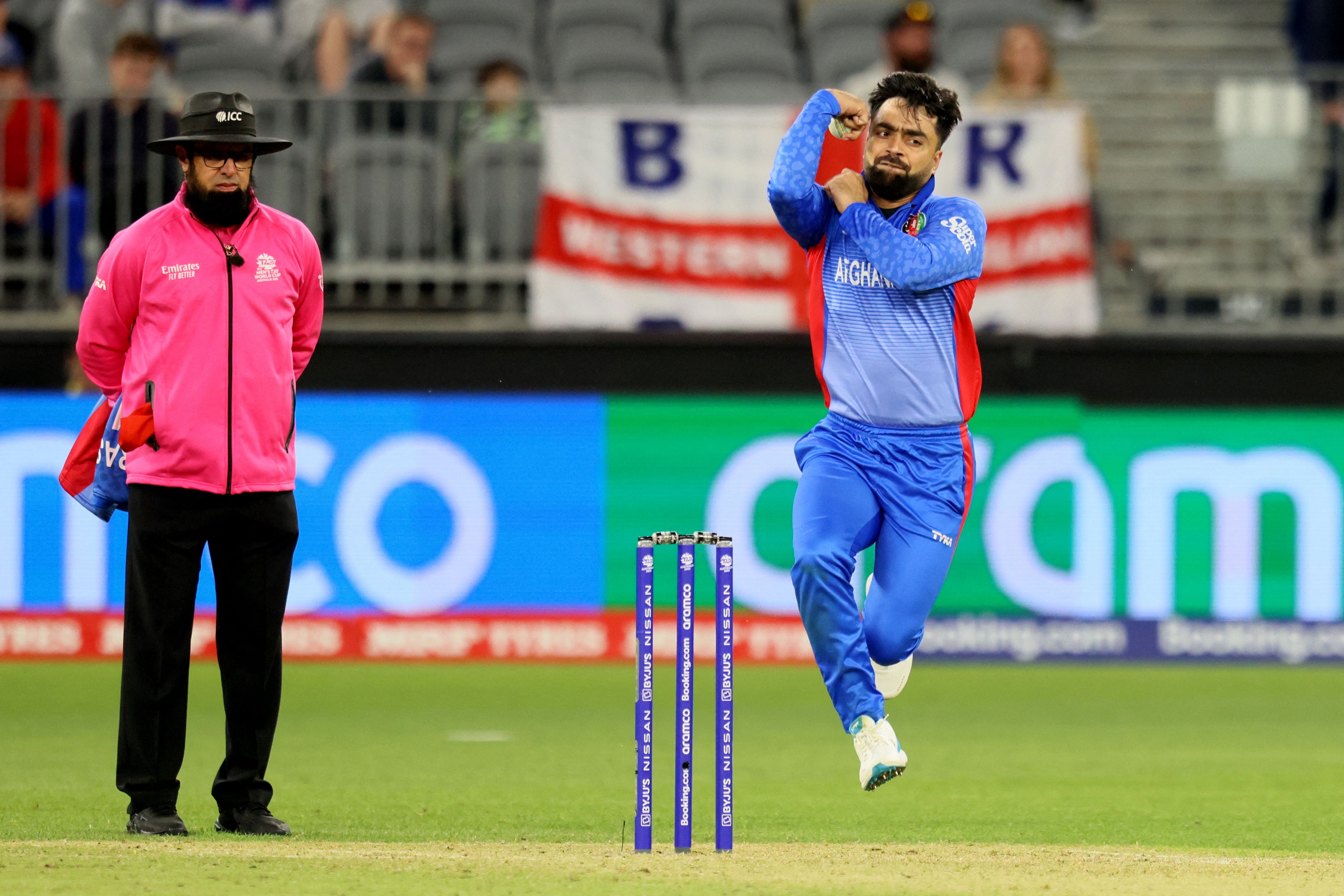 Ireland batters too will be cautious against him. But that is where the challenge lies for Rashid. To beat their defence and get amongst wickets.