Bangladesh U-19 world champions return to a hero's welcome 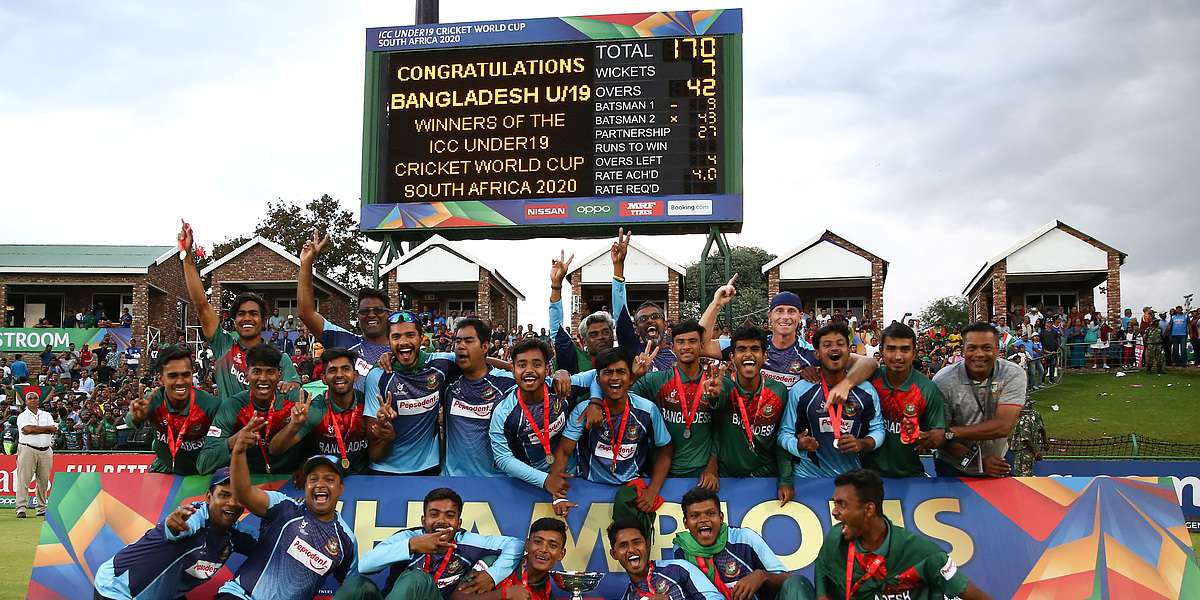 Bangladesh U-19 world champions return to a hero's welcome

Thousands of ecstatic fans celebrated on the streets and a stadium crowd screamed "we are the champions" as Bangladesh returned home to a hero's welcome on Wednesday (12th February) after winning the ICC Under-19 Cricket World Cup.

They stunned four-time winners India in the final late on Sunday in South Africa's Potchefstroom to record a three-wicket victory over the favourites.

A flight carrying the victors landed at Dhaka's main airport at 4:55pm (1055 GMT) local time where they were greeted by officials and thousands of jersey wearing and flag waving fans.

The country's sports minister Zahid Ahsan and the Bangladesh Cricket Board's (BCB) president Nazmul Hassan received the players and support staff with flower garlands at the airport as fans roared "Bangladesh, Bangladesh. We are the World Champions."

The players boarded a specially designed bus painted in national colours and had 'World Champions' written in front as they travelled to Dhaka's main cricket stadium.

Hundreds of people stood on both sides of the streets to cheer the victorious team. A procession of motor bikes with many waving national flags followed the team.

"We are champions. These boys really made us proud," said an ecstatic fan Ariful Islam.

Islam was one of an estimated 5,000 fans, according to police, who welcomed the junior Tigers at the Mirpur Sher-e-Bangla National Stadium, also known as the home of Bangldeshi cricket.

Fans waiting outside quickly filled up parts of the stands as the BCB rolled out a red carpet for the players.

Ali said they were surprised by the reception.

"We knew something would happen, but we did not expect it would be this big. It is unbelievable. I cannot express in words how I am feeling now," Ali told a crowded press conference at the stadium.

Ali, who scored an unbeaten 43 in the tense final to become player of the match, hoped the win would help the sport in the country move forward.

"Everything needs a start. I hope our win will work as a stepping stone to take our cricket forward," Ali said.

"We have had many achievements in the past, but nothing can be comparable to what this team has achieved. A World Cup is a World Cup. They won it. It was our dream," Hassan said.

"We will create an Under-21 unit (with this team) and give specialised training to upgrade their skill. During this period each player will receive Tk 100,000 ( 1,175 approximately) every month. This is our reward for them," she added.