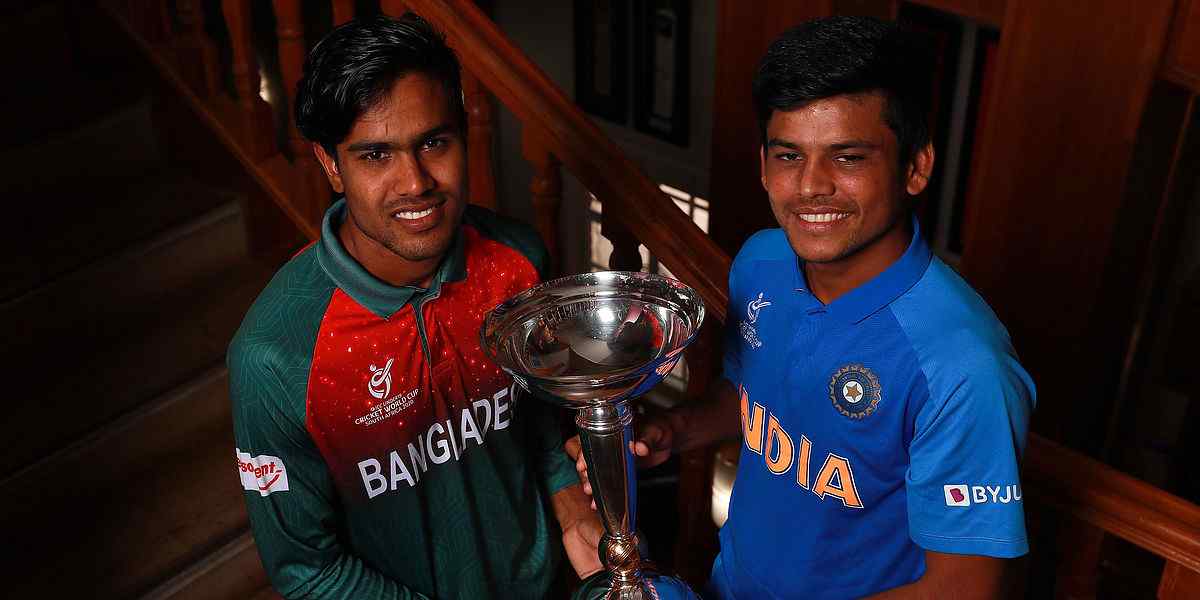 Heading into the 2020 U-19 World Cup final, both teams are undefeated

Two subcontinent teams, both unbeaten. India are set to take on a spirited Bangladesh side in the final of the 2020 Under-19 World Cup at Senwes Park in Potchefstroom on Sunday (February 9). India have already won the title four times, while this is the first time Bangladesh have made it to the final of any ICC event.

The entire cricket fraternity "predicted" India to make it to the final of this event, but going by the recent trend, it was more of a "spoiler". The Indian Under-19 side have looked a class above all and have played an extraordinary brand of cricket in the last three editions of the tournament. They have won 16 of their last 17 World Cup encounters and have lost just one, that final against West Indies in 2016 in Bangladesh.

As expected, the Priyam Garg-led side have dominated every opponent they have come across in this year's event. They decimated their arch-rivals Pakistan by 10 wickets in the semi-final with Yashasvi Jaiswal scoring an unbeaten century. While every Indian player has chipped in when needed, left-handed opener Jaiswal and leg-spinner Ravi Bishnoi have been their star performers.

India started their campaign by thrashing Sri Lanka by 90 runs, with the likes of Jaiswal, Garg and Dhruv Jurel scoring fifties. They then smashed Japan by 10 wickets before beating New Zealand by 44 runs in their last group-stage encounter. The quarter-final against Australia belonged to Atharva Ankolekar and Kartik Tyagi. India knocked over Pakistan for just 172 in the semi-final and then their openers Jaiswal and Divyansh Saxena chased down the total without a single casualty.

The Indian top-order has done the job in most of the games and the middle-order hasn't got much opportunity to showcase their skills. However, the likes of wicketkeeper-batsman Jurel, Siddhesh Veer and Ankolekar have played at least one solid knock in the limited game time they have got. The reason someone like Tilak Varma, who comes in at No.3, has batted in only two innings is because of the kind of form Jaiswal and Saxena have been in.

Jaiswal, in particular, has taken the tournament by storm. With 312 runs to his name, the left-hander is currently the leading run-scorer. The opener from Mumbai has scored three fifties and a century in this competition and has scored runs at an average of 156. He has found ample support from Saxena who has crafted two fifties in four innings and as a result there have been three encounters (against Japan, New Zealand and Pakistan) where India haven't lost a single wicket.

In the bowling department, Ravi Bishnoi and Kartik Tyagi have done most of the damage. Tyagi has impressed everyone with his pace and swing, and has been impeccable with his yorkers. Meanwhile, Bishnoi has taken 13 wickets so far in this World Cup, including two four-wicket hauls against Japan and New Zealand. It won't be easy for Bangladesh batsmen to tackle an all-round bowling attack like the one India posses.

Just like India, Bangladesh too have won all of their completed games by convincing margins. They emerged victorious against Zimbabwe and Scotland, while their last group-stage game against Pakistan was washed out. They then smashed South Africa by 104 runs in the quarter-final before defeating New Zealand by six wickets in the semi-final.

Bangladesh don't have a single batsman in the top 10 highest run-scorers' list but their batsmen have clicked as a unit. Their bowlers have done most of the job but the likes of Mahmudul Hasan Joy, Tanzid Hasan, Shahadat Hossain, Towhid Hridoy and Parvez Hossain Emon have all chipped in whenever their team has needed them to.

It was Tanzid, Shahadat and Hridoy who scored fifties in the quarter-final, while Joy crafted a fine unbeaten century in the semi-final to help his team chase down the 212-run target. Bangladesh batsmen haven't tried to do anything fancy and know that their bowlers will do the job once they get to around the 250-260 run mark.

Their biggest match-winner however has been the left-arm spinner, Rakibul Hasan. The 17-year-old has taken 11 wickets in this competition at a stunning average of 8.45, including a four-wicket haul and a five-fer. India will also have to be wary of Bangladesh's opening 6 feet 3 inches left-arm paceman, Shoriful Islam.

Even if Bangladesh fall short against India, they have done enough to grab the eyeballs of many fans. The Akbar Ali-led side, however, have a chance to etch their names in the history books but for that, they will have to beat the invincible Indian side, something that they have only done thrice in 22 games.