Uthappa is the sole Indian player in the auction list with a base price of Rs 1.5 crore

As many as 332 cricketers will go under the hammer at the IPL auction in Kolkata on December 19 with Australia's Glenn Maxwell and South African Dale Steyn among those opting for the highest base price of Rs 2 crore.

"While 997 players had initially registered for the auction, the final list has been pruned after the eight franchises submitted their shortlist of players," read an official IPL statement.

Australian all-rounder Mitchell Marsh and Sri Lanka veteran Angelo Mathews too have opted for the Rs 2 crore base price. Only 73 slots are there to be filled in the eight franchises and only 29 of them can be foreign buys.

Robin Uthappa, who was released by Kolkata Knight Riders last month, is the sole Indian player in the auction list with a base price of Rs 1.5 crore.

Premier Australian pacer Josh Hazlewood, who has never played in the IPL, has put himself in the highest base price bracket alongside bowling partner Pat Cummins, who has represented KKR, Delhi Capitals and Mumbai Indians.

Maxwell, who recently took a break to deal with mental health, is back in the auction pool after opting out of the last edition alongside Aaron Finch.

Finch is back in the pool at a base price of Rs 1 crore. Fellow Australian Chris Lynn, who was released by KKR, will be expecting to go at a good price at the auction next week.

Besides Uthappa, other Indian names including Piyush Chawla (released by KKR), Yusuf Pathan (Sunrisers Hyderabad) and Jaydev Unadkat (Rajasthan Royals) have set their base price at Rs 1 crore.

Here is the breakup of the capped Indian players going into the IPL 2020 auction: 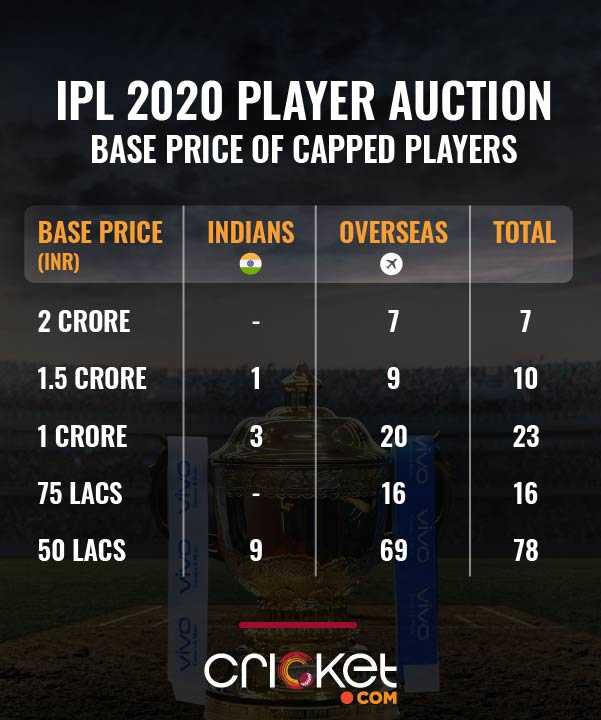 Among the uncapped players, as many as 183 players are in the Rs 20 lakh category, seven in Rs 40 lakh and eight in Rs 30 lakh. The full details are as follows: 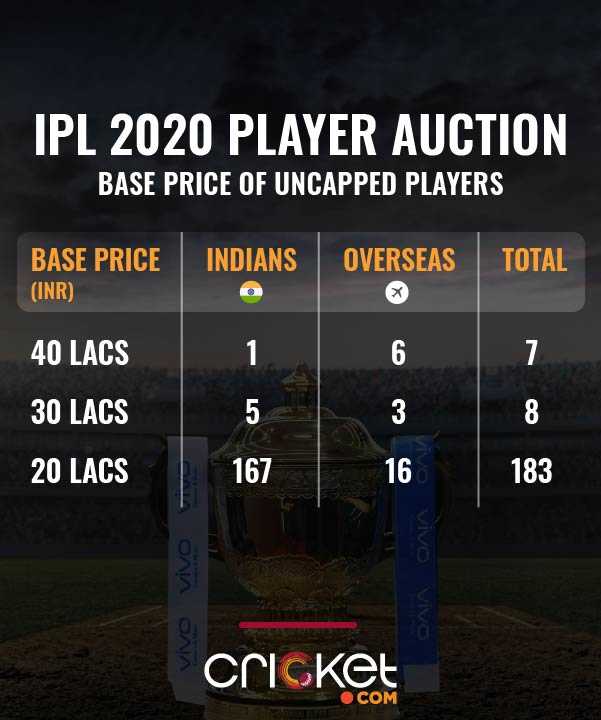 A total of 186 Indian, 143 overseas and three players from Associate Nations will be up for grabs at the auction. Seven cricketers have placed themselves in the highest base price list of Rs 2 crore, 10 in Rs 1.5 crore bracket and 23 in Rs 1 crore category.