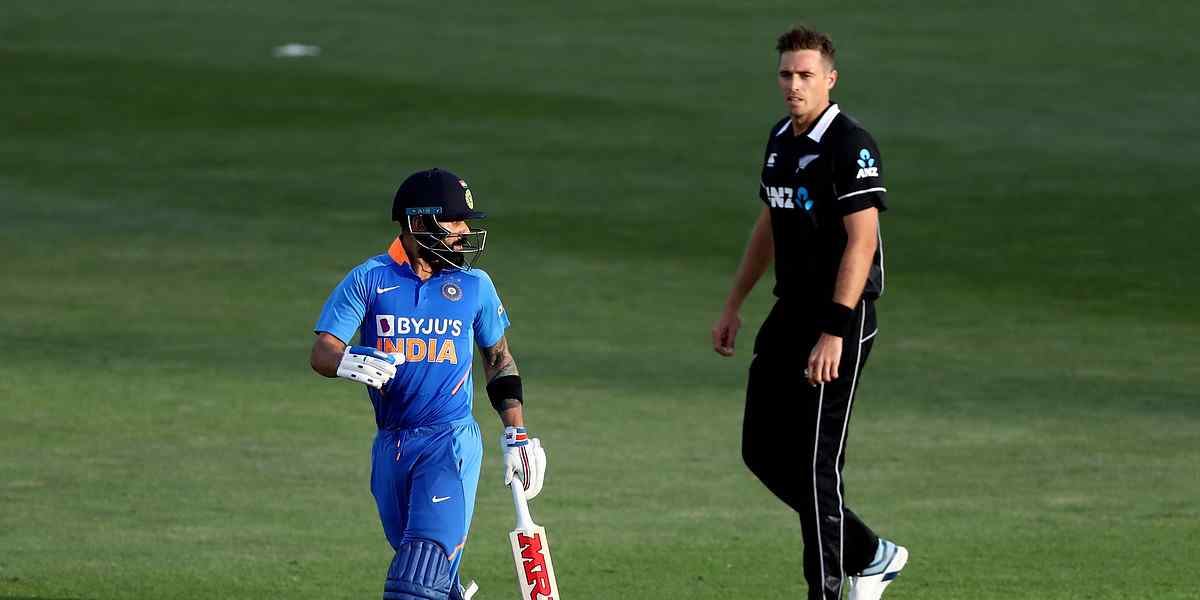 India have not been whitewashed in an ODI series since 1997

“One-day cricket in this calendar year is not as relevant like T20Is and Tests”, said Virat Kohli unconcerned about India conceding an unassailable 0-2 lead in the ongoing ODI series against New Zealand.

It was an uncharacteristic statement from the India skipper who is known to be fiercely competitive in all circumstances and in all forms of cricket. Moreover, it is India’s first series defeat in any format since the semifinal defeat in the 2019 World Cup against the same opposition.

The New Zealand side, without Kane Williamson, have exposed the visitors in both of the major facets of the game - bowling in the first ODI in Hamilton where the Kiwis chased down 348 with 11 balls to spare and then top-order batting in the second ODI in Auckland where reckless batting saw India lose half their side before reaching the three-figure mark.

Ravindra Jadeja and Navdeep Saini revitalized India’s chase at Auckland. Kohli accentuated Saini’s batting talent as a positive from the defeat. But the question stays - Are India too focused on accumulating bowlers who can bat being blinded by England’s success who have been lucky to find first-choice bowlers providing crucial contributions with the bat?

Till their last ODI series, against Australia, India had the luxury of too many openers to pick from for two slots. Then Shikhar Dhawan got injured, KL Rahul settled at number five, Rohit Sharma injured his calf to fly back home and suddenly, India were opening with two ODI debutants to begin this series.

Mayank Agarwal and Prithvi Shaw have had great starts to their respective Test careers but the duo have failed to live up to the expectations facing the white-ball in New Zealand. Interestingly, both of them were dismissed by Kyle Jamieson in the second unofficial ODI against New Zealand A prior to the ODI series and the history repeated itself in the second ODI as well. None of them have managed to stay at the crease post the first 10 overs of the innings in either games. Consequently, India have had to shift from their Plan-A of scoring runs.

The relief for batsmen brings some misery for the spinners. At Bay Oval in Mount Maunganui, the spinners have struggled with a bowling average of 49.1 runs per wicket to complement a strike-rate of 56.2 balls per wicket - both being the third worst at all New Zealand venues since 2017. An economy rate of 5.3 runs per over also isn’t promising as compared to other venues.

It has already been a tough series for Indian spinners. Kuldeep Yadav and Ravindra Jadeja leaked 148 runs in their 20 overs in Hamilton while Yuzvendra Chahal also went for 58 runs in the process of taking three wickets in Auckland.

The current Indian spin trio (Chahal, Jadeja and Yadav) have managed to dismiss Taylor only once between them while the Kiwi has amassed 338 runs against them.

Another glaring issue for India has been the inability to take wickets upfront. The absence of Williamson for New Zealand created a big void in the New Zealand batting line-up which the Virat Kohli-led side have failed to exploit. The Blackcaps have gone through first powerplay without losing any wickets - scored of 52 for none and 54 for none - in both ODIs.

This can be a consequence of Jasprit Bumrah’s ordinary show since his return from injury. The right-arm seamer has taken only one wicket in five ODIs this year. His economy-rate of 5.13 is also the highest in a year since 2017. With Taylor negotiating the spinners and Bumrah yet to find his mojo since his return, the New Zealand batting have managed to stay ahead of their Indian counterparts even without their star batsman, Williamson. If the trend continues, India might fall to their first whitewash in a bilateral ODI series since 1997.

New Zealand: Plagued by injuries in the fitness department, New Zealand had to field an ill Tim Southee in the second ODI to complete their XI. Southee completed his 10 overs within the first half of India's innings and went off the field. Blackcaps have called in Ish Sodhi, who missed the last day of the first-class game between New Zealand A and India A to train with the senior side, and Blair Tickner as cover. Given the green signal after his shoulder injury, Kane Williamson is likely to be back in the XI. Rest will depend on the morning of the game.

India: With the series gone, India has room for experimention. Rishabh Pant, yet to play a game on the tour, might get a match. Having earned a well-earned rest in the previous game, Mohammed Shami might be back in the XI too.