India win the super over and the series 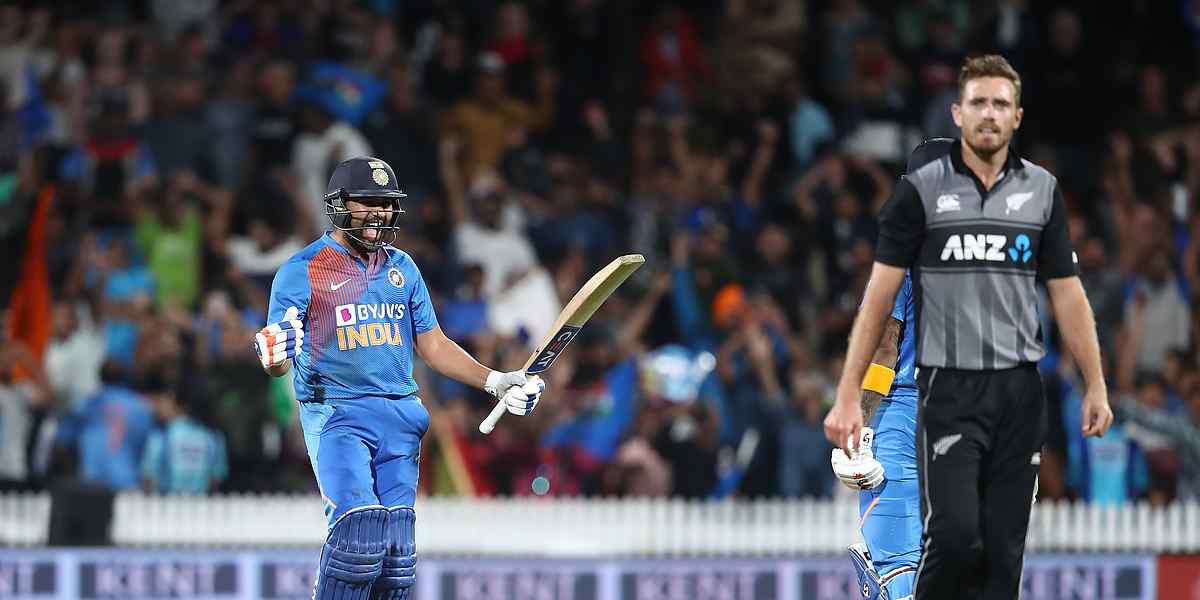 India win the super over and the series

A rampaging Rohit Sharma helped India win the super over and take an unassailable 3-0 victory in a nail-biting contest at Seddon Park, Hamilton. With this victory, starred by contributions from Rohit and Mohammed Shami's magical last over helped India achieve their first T20I series victory against New Zealand

New Zealand won the toss and opted to field. India scored 179 runs after losing five wickets. The hosts, on the back of skipper Kane Williamson’s 95-run knock, needed two runs in four balls with six wickets in hand but lost their way with no runs off the bat and two wickets, sending the match into super over.

Jasprit Bumrah, who conceded 6.5 runs per over in the last two matches, proved costly not only in his four-over spell but also in Super Over after conceding 17 runs.

In their third super over in the last six months, New Zealand got two runs off first two balls, but soon Bumrah was smacked by Williamson, who hit a six off the 3rd ball and a four off the 4th ball. The day ended shabbily for Bumrah as Guptill ended the over by striking a boundary to give an 18-run target to India.

After Tim Southee conceded only three runs off the first two balls, the hosts look set to keep the series alive. KL Rahul then struck the boundary off the third ball and took a single off the fourth delivery to bring the target to 10 off two balls. Batting in the super over for the first time, the hit-man Rohit Sharma, smashed two back to back sixes to destroy New Zealand hopes.

Earlier, India got off to a good start with the magnificent show by Rohit (65 off 40 deliveries) and Virat Kohli (38 off 27 deliveries) that helped the visitors propel to a decent total on a sluggish wicket.

After two blips in the last two matches, Rohit finally caught the rhythm and smashed two sixes and three fours in the last over of the powerplay. However, Rahul, who played a vital role in India's win in the first two matches, did not score big and was dismissed for 27 off 19 deliveries.

Starting with 24 off 18 balls, Rohit capitalized on the final over of the powerplay hitting three sixes and two fours off Hamish Benett who had an ordinary day as he conceded 54 runs in his quota of overs. Adding another feather to his cap, Rohit became the first Indian cricketer to register a half-century in the powerplay.

The Rohit-Rahul partnership was gaining momentum but soon it brought to an end after Rahul was caught by Colin Munro off Colin de Grandhomme in the ninth over. Continuing to experiment, Shivam Dube was sent in at three. However, the loss of the first wicket resulted in a sudden change in momentum. Benett, getting some respite, got Rohit (65) and Dube (3) in the same over leaving India at 96/3 at the end of 11 overs.

Kohli and Shreyas Iyer at four and five played the 12th over cautiously and scored just three runs with an aim to defend their wickets. They knocked the ball around for ones and twos in 13th over to add another seven runs. Kohli hit his first boundary of the match off Ish Sodhi in the 14th over and then they accumulated 15 runs from the 15th over smashing a six and a four. Mitchell Santner sent Iyer (17) back to the Pavilion in the 17th over, while Bennett dismissed Kohli in the 19th over. Manish Pandey (14) and Ravindra Jadeja (10) added quick runs and remained unbeaten to help India reach 179.

In reply, New Zealand’s batsmen got a brisk start by scoring 51 runs in power play. Shardul Thakur was again given the ball in the first over and he conceded eight runs. Martin Guptil did not lose the chance to take advantage of the new ball by hitting the first six of the match. He added two more sixes off Bumrah in the third over, using his pace and bounce to clear the boundary behind the wicket. Thakur ended Guptill's (31) brisk innings in the 5th over leaving the Kiwis at 47/1.

Ravindra Jadeja then took another wicket in the seventh over by sending Colin Munro (14) back, out stumped. On the day of failed experiments, Yujvendra Chahal did not let Mitchell Santner (9) score in double-digit and bowled him in the 10th over.

It was skipper Williamson who stood firm and played a dazzling 95-run knock of 48 deliveries with the help of eight boundaries and six sixes. With 9 needed in the last over, Ross Taylor hit a full toss for six off the first ball from Shami. With two needed the New Zealand skipper, attempting a ramp was caught behind. Tom Siefert, in next, missed the first ball and the pair ran a bye off the next leaving one run to be scored off the last ball. Trying to drive the ball hard, Taylor played on to end the match in a tie.

This was only the second time India played a super over. The last occasion was when the contest was decided through a ball-out. With another loss in the super over, the Kiwi skipper could just say that they should do a better job in finishing games in regular time.