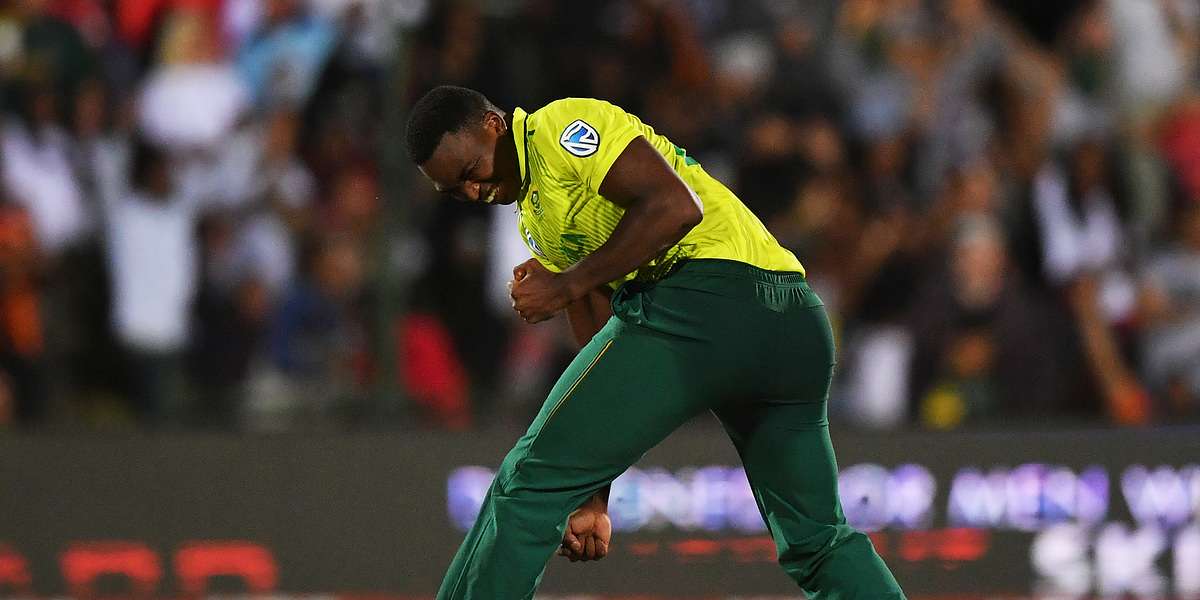 The fast bowler successfully defended seven off the final over

Lungi Ngidi stars with the ball to hand South Africa a nerve-wracking one-run win in the first T20 International (T20I) against England at Buffalo Park, East London. Ngidi finished with three wickets in the match, out of which he picked two in the final over, when England needed seven runs to win. England were poor in the last five overs with the bat. They lost their last six wickets for just 24 runs, which eventually gave South Africa a closely-fought win

In pursuit of 178, England openers Jason Roy and Jos Buttler's jobs would have been to get England off to a flying start. However, it was Dale Steyn who got the big wicket of Buttler for 15 off 10. With that, he became South Africa's leading wicket-taker in T20Is with 62 scalps.All the good work in the first three overs was undone after JJ Smuts conceded 22 runs from his first over, to give England back the initiative. Roy was looking in ominous mood and that was not a good sign for South Africa. England had brought up their fifty after just 4.2 overs and the chase looked to be in England's hands at that point.

Roy and Bairstow brought up their fifty stand in no time and the former also got to his fifth T20I fifty off just 22 deliveries. England needed under eight an over at that point and with nine wickets in hand with some more power-hitters to come, they were in the driver's seat. Andile Phehlukwayo then got the big wicket of Bairstow for 23 off 19, bringing an end to the 72-run stand for the second wicket off just 39 deliveries.

Just when the partnership between Eoin Morgan and Roy was looking good, left-arm pacer Bueran Hendricks got Roy for 70 off 38, to keep South Africa in the game. England needed 44 off the final five overs left. It was still England's game to lose at that stage considering that they had seven more wickets up their sleeve. Joe Denly, who was playing ahead of Dawid Malan lasted just four balls for his three. Phehlukwayo gave away just five off the 16th over and England needed close to 10 an over from the final four overs.

After Stokes' dismissal, England suddenly needed 23 from the final two overs. South Africa had given away just 21 runs in overs 16, 17 and 18 combined and had picked up two wickets along the way, which choked England for a bit. However, Morgan made up for it after taking Hendricks to the cleaners in the penultimate over and in the process reaching his fifty off just 33 deliveries, but holed out right after that, which turned out to be the turning point. England still needed seven runs off the final over.

Ngidi bowled one of the best final over, getting two wickets off the first five balls and England needed three off the final delivery as a result. They eventually managed just one.

Earlier in the match, South Africa managed 177 for 8 from their 20 overs after useful contributions at the top by Quinton de Kock (31), Temba Bavuma (43) and Rassie Van der Dussen (31).

England started off with Moeen Ali, who had bowled just seven overs before this game and managed to pick up just one wicket at an economy rate of nine. Morgan would have been tempted to use Moeen against de Kock as he has been susceptible against off-spinners of late.

After a first over, de Kock tore into Tom Curran, taking 15 runs off his over. Mark Wood was then in for some punishment, after he started off with a waist high full toss, which resulted in a boundary. The consequent free-hit delivery - another full toss - was deposited over the fine-leg fence by de Kock, who was looking in a menacing mood. His opening partner Bavuma too joined the party and the duo took Wood for 20 runs off his first over.

It was Moeen who had the last laugh as he removed de Kock for a 15-ball 31 off the first ball of his third over. However, South Africa brought up fifty in the fifth over and were cruising at that stage, despite losing de Kock. The Proteas had got to 68 for 1 from their powerplay overs and some sloppy ground fielding from England certainly played its part. Bavuma and Van der Dussen looked positive right from the beginning and brought up their fifty partnership for the second wicket off just 30 deliveries and 100 was up in just the 10th over. The duo have not let the momentum go away after de Kock's dismissal and were staring at a huge score at that point.

After a solid 63-run stand, Van der Dussen was caught at deep square leg for 31 off 26 and he was soon followed into the pavillion by Bavuma, who hit a 27-ball 43, with five fours punctuation his innings. With two new batsmen at the crease, England sensed that they could restrict the hosts to a reasonable total.

England managed to choke the scoring to a certain extent and the fact that they had dismissed David Miller cheaply right at the beginning of the death overs certainly worked in their favour. In the death, England pulled things back even further, despite some big blows from Andile Phehlukwayo and a couple of boundaries from Smuts. They eventually scored just 42 runs from the final five overs and eventually, just about managed to get to 177.

Chris Jordan was the pick of the England bowlers. He started the final over with wickets off the first two deliveries and in the end, gave away just five runs in the end. Earlier, England had won the won the toss and elected to bowl.

Player of the match: Lungi Ngidi