England level series despite of a nervy ending 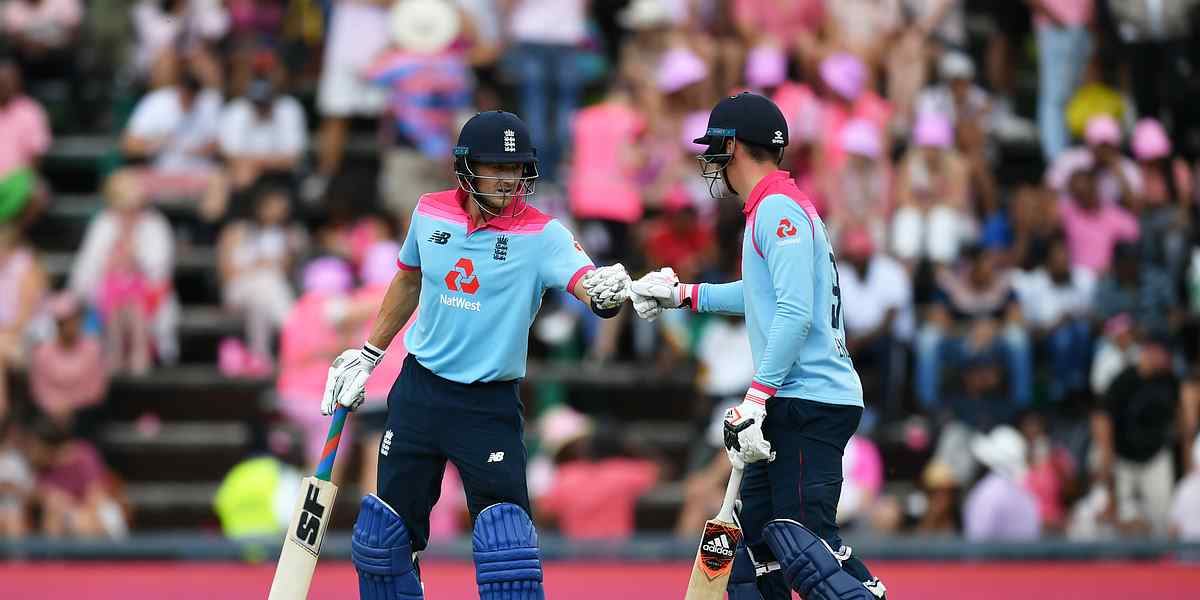 England level series despite of a nervy ending

England were well ahead of the required run-rate, but South Africa did not give up till the end

Despite of a nervy ending, England have beaten South African by two wickets in the third and final One-Day International (ODI) at The Wanderers, Johannesburg to level the series 1-1.

In pursuit of 257, England got off to the perfect start with Jonny Bairstow looking in an aggressive mood, while Jason Roy was happy playing second fiddle. Lungi Ngidi bore the brunt as Bairstow smashed him for 20 runs off one over after which he was taken off the attack. Bairstow punished anything remotely short or deliveries that were full and wide. As a result, England reached the 50-run mark in just the sixth over. Amidst all the chaos, it was Lutho Sipamla, who drew first blood, getting rid of Bairstow for a destructive 23-ball 43.

Roy too followed Bairstow back into the pavillion shortly for run-a-ball 21 and England with Joe Root and Eoin Morgan at the crease had to rebuild after a brisk start. England had reached 77 for 2 at the end of the first powerplay and were well ahead of South Africa at this stage.

Eoin Morgan too did not last long as Beuran Hednricks dismissed him for just nine. The England captain has been dismissed seven times by left-arm pacers since 2019, which is the most against any bowling technique. The required run-rate was still very much in control, but England needed a good partnership to get the momentum back in their favour. Root and Joe Denly needed to do that for them. Their partnership once again looked threatening and South Africa needed a couple of quick wickets to get back into the game.

England got to 100 in the 15th over and were still favourites to win from there. The runs had dried down since they lost three wickets in quick succession, but with batting still to come, they would have backed themselves to wipe off the remaining runs.

Root was dismissed one short of his fifty, caught at leg slip off Tabraiz Shamsi, but his 76-run stand with Denly seemed to have dented South Africa's hopes of sneaking in a victory. However, Denly carried on and brought up a patient fifty off 72 deliveries. He built another fifty partnership with Tom Banton, who scored at a quick pace to relieve the pressure on Denly. They were dismissed in quick succession after putting up 70 for the fifth wicket. Tom Banton (32) and Tom Curran (5) too joined Denly back in the dressing room soon after that with England still needing 16 off the last 11 overs with three wickets in hand.

After doing the damage with ball in hand, Moeen Ali and Adil Rashid now had the responsibility to knock the remaining runs as well. But Ngidi found his mojo after his first spell and removed Rashid with just five more needed with more than seven overs remaining. In the end, it was Moeen, who got England home.

Earlier in the match, South Africa posted a competitive 256 for 7, largely due to David Miller's unbeaten 69 off 53 balls. The platform was initially laid by a composed 81-ball 69 from skipper Quinton de Kock.

Initially, South African batsmen were watchful in the first few overs. Saqib Mahmood and Tom Curran have bowled tight lines and lengths and have made it difficult to score off them. The pressure finally paid off as Saqib Mahmood, playing his first ODI for England, cleaned up Reeza Hendricks for 11. As a result, South Africa managed just 36 runs in the first powerplay.

However, de Kock and Temba Bavuma put on a crucial fifty partnership for the second wicket, which gave Proteas the advantage and has given them a platform to go big. De Kock and Bavuma have played extremely well and after the fall of an early wicket, have more than steadied the ship for this hosts.After a solid 66-run stand, Bavuma was trapped leg before by a googly by Adil Rashid, which the he did not read. Rassie Van der Dussen too was given out leg before off the next delivery, but then the umpire voluntarily decided to review his decision and in the end, the replays showed that the ball was missing the wickets.

There was a moment of controversy as England thought South Africa had used up their review for Bavuma. But as it turned out, the technology was not available during his dismissal as a result of which the Proteas had not exhausted their review, which was then used by Van der Dussen and he survived, much to the unhappiness of England. However, it did not cost England a lot as Van der Dussen was cleaned up by Moeen Ali for just five.

South Africa brought up their 100 in the 24th over and de Kock was going to be a crucial player for them as he was well set at that point. But after getting to 69, de Kock was bowled by Rashid, just when his partnership with JJ Smuts was looking good. After getting off to a start, Smuts was run-out after a mix-up with David Miller for 31. After being in a relatively good position, South Africa found themselves in a spot of bother. Miller was going to be key for them.

Rashid struck again and this time picked up the wicket of Andile Phehlukwayo, who has the highest strike-rate at the death for South Africa in ODIs since 2018. The run-out of Beuran Hendricks further added to South Africa's woes.However, Miller continued batting well, and brought up his 13th ODI fifty off just 45 deliveries, which gave South Africa an outside chance of reaching 250.

Jordan's last three overs yielded 40 runs and it was Miller who took him to the cleaners to help South Africa to a respectable total. Only once has a target of over 250 been successfully been chased down at Johannesburg since 2013.

The last wicket stand between Miller and Lutho Sipamla yielded 52 off just 31 and that could have very well taken the game away from England.

Earlier, England had won the toss and elected to bowl first. They have made three changes to their XI. Saqib Mahmood has been handed an ODI debut. Moeen Ali and Adil Rashid come into the side as well. They have left out Sam Curran, Chris Woakes and Matthew Parkinson.

The teams now move on to the T20I series, which commences from February 12.