The last year of the decade saw some pulsating, exciting and nail-biting finishes in all three formats. Here’s our top five picks: 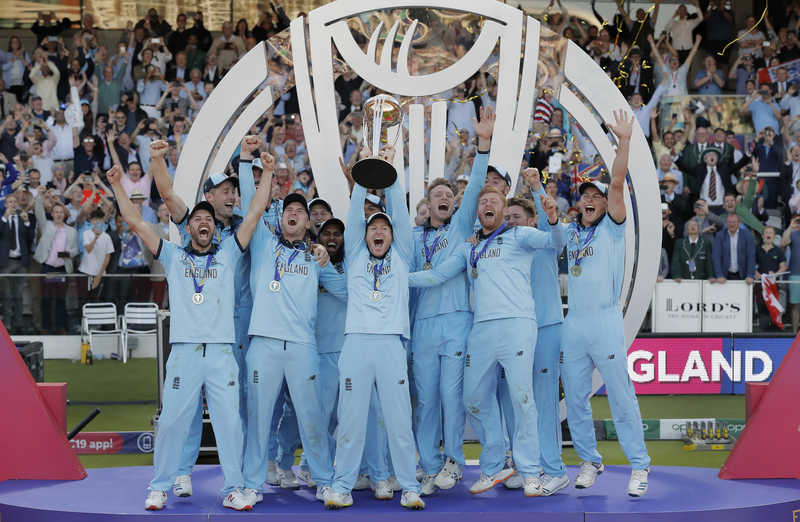 England vs New Zealand, 2019 World Cup Final, Lord’s: In one of the closest matches you are ever likely to see, England trumped New Zealand not by scoring more runs than them, not by chasing the target down with wickets to spare, but won the match by virtue of scoring more boundaries. This was not any bilateral series, this was the World Cup final – A tournament which neither side had won before.

Electing to bat, New Zealand put on a moderate 241 on the board, but given the bowling attack at their disposal they would have backed themselves to defend that. England on the other hand have scored 350-plus totals on many occasions over the last four years, but by no stretch of imagination was this going to be a cakewalk for them.

England gave very little away with the ball, making New Zealand toil for every run. The Kiwis too were up for the task, churning out the hard runs, with Henry Nicholls (55) and Kane Williamson (30) putting on for the second wicket, with only Tom Latham (47) the other contributor.

England in reply lost wickets at regular intervals, but it was the Ben Stokes-Jos Buttler stand of 110 for the fifth wicket that tilted the match in the host nation’s favour but the Kiwis kept at it and ensured England needed 15 from the final over. After two dots, the third delivery from Trent Boult was clubbed for a six. However, there was drama in the next delivery as Stokes smashed the ball to mid-wicket, but while he was scampering for the second run, the ball hit his bat and went into the fence as he dove into the crease as a result of which England were granted six runs. 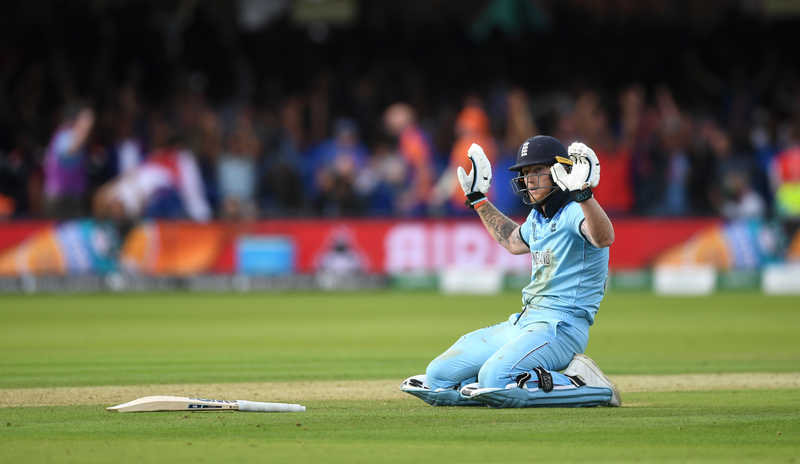 The next two deliveries resulted in two run-outs as New Zealand held their nerve and the match ended in a tie, pushing it into the Super Over.

In the Super Over, both teams once again could not be separated and eventually England by virtue of scoring more boundaries (24) than New Zealand (16) clinched the World Cup for the very first time, much to the players’ and the entire nation’s jubilation.

South Africa vs Sri Lanka, 1st Test, Kingsmead, Durban: Before the start of this series, South Africa had lost just six matches at home against an Asian side. But this time around, Sri Lanka gave the Proteas a shock in their own backyard and it took one of the best knocks in Test history to make this happen. 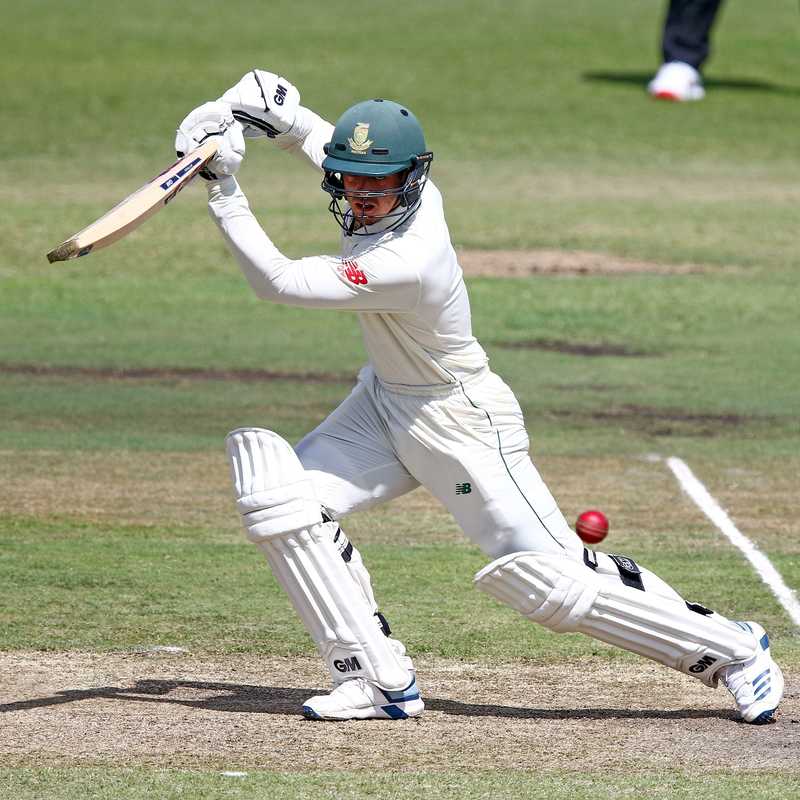 After being put into bat first, Quinton de Kock played two counter-attacking knocks (80 & 55) to give South Africa a great chance of winning the game. Not to forget, skipper Faf du Plessis too scored a crucial 90 in the second innings that helped set Sri Lanka a target of 304. Kingsmead was no stranger to successful 300-plus chases. In fact, the highest ever successful run-chase on South African soil was achieved at this venue – by South Africa against Australia in 2002 – a match in which they chased down 335.

With 304 required, Sri Lanka had their backs against the wall after losing three wickets for just 52 runs. Kusal Perera had scored a fifty in the first innings and needed more than that if Sri Lanka were to pull this off. Sri Lanka had successfully chased down a target of 300-plus just thrice in their history, all of which came at home.

The South African pace trio of Dale Steyn, Kagiso Rabada and Duanne Olivier were breathing fire and things did not look good for Sri Lanka at that point. Partnerships were the need of the hour and Perera built a 58-run stand for the fourth wicket with Oshada Fernando and then a crucial 96-run partnership for the sixth wicket with Dhananjaya de Silva.

Sri Lanka still needed 98 runs more when de Silva was out and soon the equation changed to 78 runs with just one wicket in hand. From there, Perera and Vishwa Fernando stitched perhaps the best ever 10th wicket stand in Test history. Fernando was Sri Lanka’s star with the ball, scalping eight wickets, but now needed to hang in there with a well set Perera, along with whom he had a chance to script history. 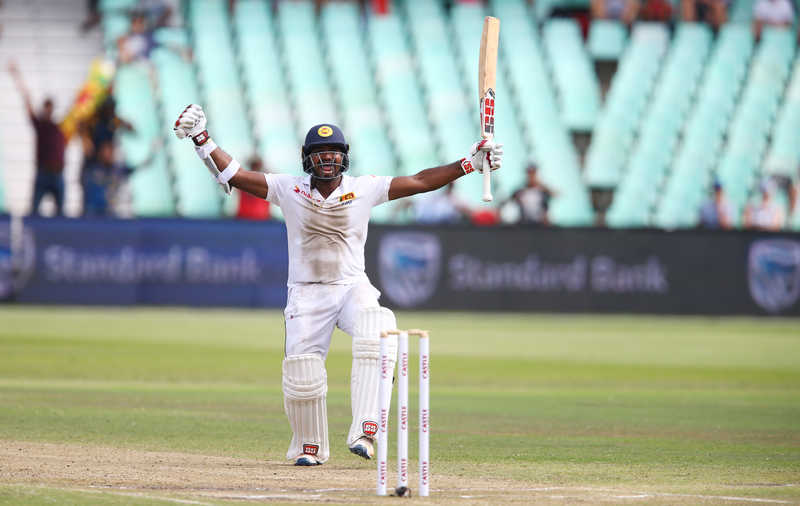 Perera, as expected, shielded the No. 11, who too played his part by blocking out whatever deliveries he had to. Off the third delivery of the 86th over, with four more required, Perera opened the face of the bat and guided it past first slip to send the whole team and his country into a frenzy. Perera finished with an unbeaten 153, which is perhaps the finest innings he will ever go on to play in his career.

England vs Australia 3rd Test, Headingley, Leeds: Not many teams would boast of going on to win a Test after being bowled out for just 67. Trailing 1-0 against Australia in The Ashes, England needed a special performance from someone and just like he did in July at Lord’s Ben Stokes once again stepped up to the plate to deliver for England.

There was enough swing and bounce for the fast bowlers in the first two days and as a result, Australia were bundled out for just 179 and England in response fell convincingly short. With a 112-run lead, the match was Australia’s to lose and they did well to get to 246, thereby setting England a target of 359.

Luckily for England the pitch had eased up a bit and batting became a tad easier as the days rolled on. When they lost their openers with just 15 on the board, any minute chance of pulling off a win looked even dim. Joe Root (77) and Joe Denly (50) resurrected the innings, but when Stokes came into bat, England still needed 218 runs to win and time was not an issue. 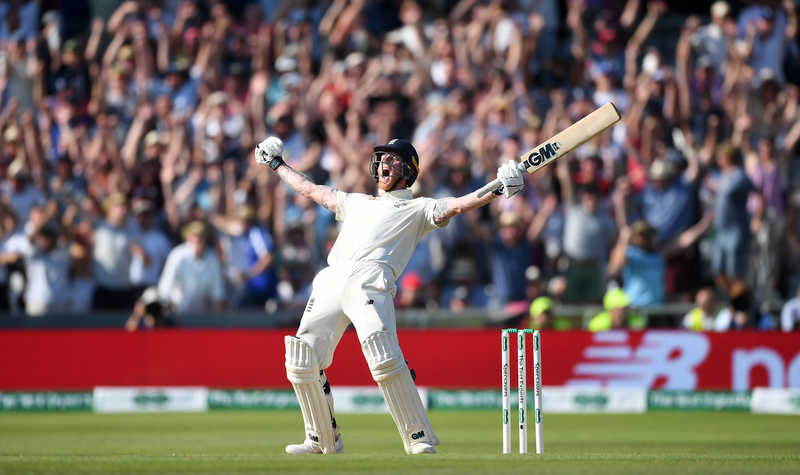 Stokes paced his innings extremely well. He was patient initially, absorbed the pressure and when there was a bad ball or the need to go big, he executed it brilliantly.

With nine down for 286, England needed 73 more to win the match and level the series. Jack Leach, who had scored a brilliant 92 opening the batting against Ireland, walked in at No. 11. He looked assured more often than not and Stokes was happy to give him the strike when needed. With a slap square on the off-side, Stokes for the first time showed emotions in the innings and it was that of pure ecstasy, knowing that England were well and truly in the hunt to regain The Ashes from the Aussies.

New Zealand vs England, 5th T20I, Eden Park, Auckland: Not again! Was the feeling the cricket fans around the world would have yelled in unison as yet another England-New Zealand match was heading into the Super Over – this time in a T20I decider – months after the teams went through similar agony in the 2019 World Cup final.

However, something like a World Cup title was not up for grabs but it was all to play for as the winner would walk away with the series which currently was at 2-2.

Barring Jonny Bairstow (47 off 18), none of the batsmen really got stuck in. But with 13 required Chris Jordan smashed 6, 2, 4 to push the game into the Super Over.

This Super Over was not as exciting as the one we witnessed in the World Cup final, but needing 18 to win, New Zealand just managed eight and once again, lost a Super Over to England.

West Indies vs New Zealand, Match 29, 2019 World Cup, Old Trafford, Manchester: In a crucial tie between West Indies and New Zealand at Old Trafford, it took two special batting efforts to make this one a special game – 148 from Kane Williamson and a 101 from Carlos Brathwaite. 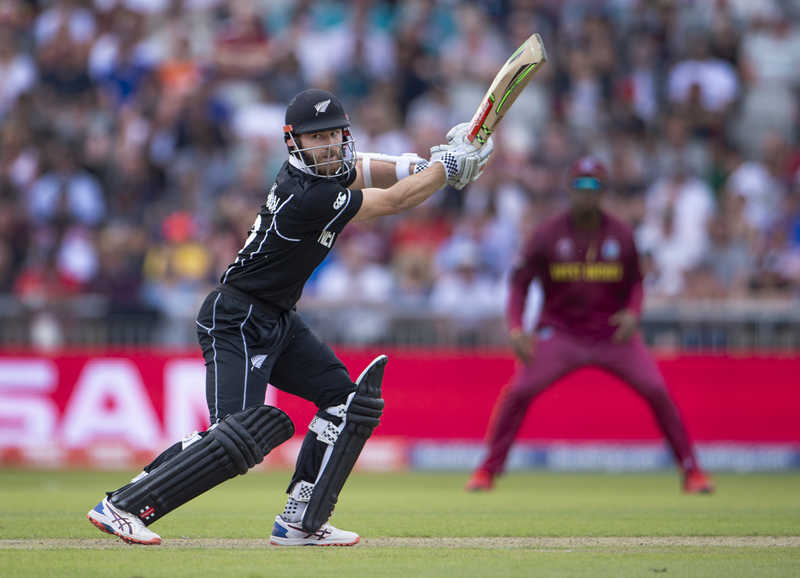 After Sheldon Cottrell removed the openers off their very first ball, the two senior pros Williamson (148) and Ross Taylor stepped (69) up to the plate to build a solid 160-run third wicket stand which set the platform and New Zealand eventually reached a competitive 291 for 8.

It was once again the third wicket stand – between Chris Gayle (87) and Shimron Hetmyer (54), which helped the Windies resurrect the innings after they too had lost two early wickets. But once Hetmyer was dismissed, West Indies lost their way and were struggling at 211 for 8, but Brathwaite at that point fighting a lone battle had already gone past fifty and was looking to clear the fence at every opportunity.

With 33 more required from the final three overs, with just a wicket in hand, Brathwaite targeted Matt Henry and smoked him for 25 runs to reduce the equation to just eight off 12 deliveries. After three dots in the penultimate over, Brathwaite ran two to bring up his maiden ODI hundred off just 80 deliveries, but with six more needed, he looked to clear long-on where Trent Boult took a brilliant catch, bringing the big man down to his knees. 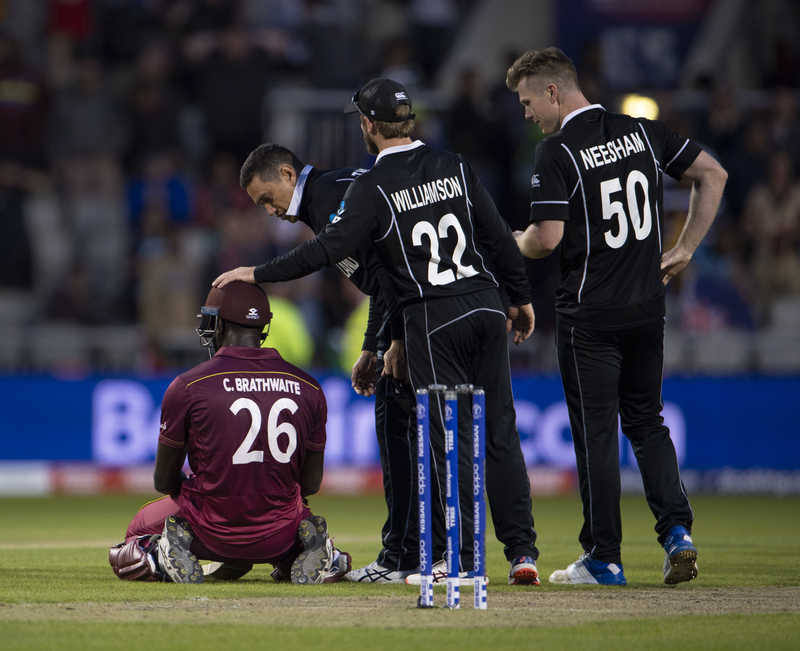 It looked to be a repeat of the World T20 2016 final with Brathwaite going big and Ian Bishop calling the shots from the commentary box, but in the end, the result turned out to be different.