Shaheen stars as Bangladesh are bowled out for 233 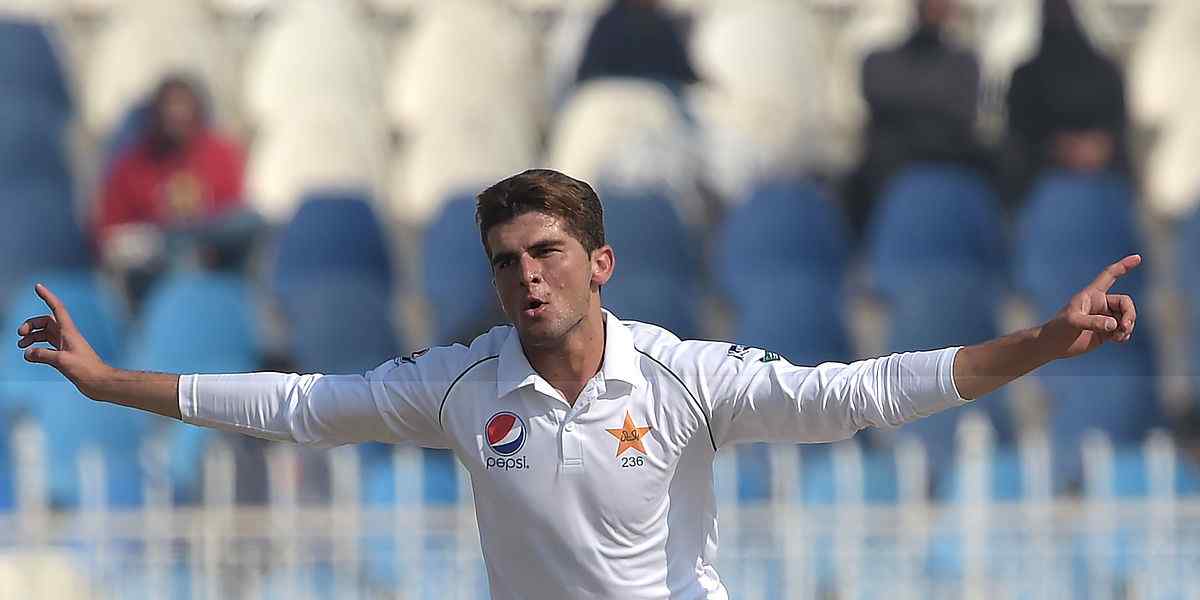 Shaheen stars as Bangladesh are bowled out for 233

The left-arm pacer finished with figures 4 for 53

Lanky paceman Shaheen Shah Afridi took four wickets to help Pakistan dismiss Bangladesh for a paltry 233 on the opening day of the first Test in Rawalpindi on Friday. Shaheen recorded figures of 4-53 in 21.5 overs and was ably assisted by fellow pacer Mohammad Abbas (2-19) and spinner Haris Sohail (2-11) to justify Pakistan's decision to send Bangladesh in to bat on a greenish-yellow Rawalpindi stadium pitch.

Pakistan were due to bat for five overs but bad light forced umpires to call it a day. Bangladesh could have been bowled out for inside 200 had it not been for a defiant display of batting from Mohammad Mithun who top-scored with 63 including seven fours and a six in his 193-minute stand. Bangladesh were reeling against pace at 161-6 when Mithun added an invaluable 53 run stand for the seventh wicket with Taijul Islam who made a resolute 24.

It was Sohail who had Islam caught by Yasir Shah before Pakistan wiped off the tail with the second new ball as 16-year-old Naseem Shah ended Mithun's resistance, getting him caught behind. Shaheen said he was happy to do his part. "It's my role to get wickets and I am happy that I did that," said Shaheen, who played down not getting a five-wicket haul.

"You aim at improving your figures but the beauty of Test cricket is that you don't always break records.

"Other team also comes to play and it was unlucky that the last man got run out but it's always a team game," said Shaheen whose best figures of 5-77 came against Sri Lanka in December last year.

Just before tea, Sohail broke a defiant 54-run stand for the sixth wicket between Liton Das (33) and Mithun as the two led Bangladesh's fightback after the Pakistan bowlers totally dominated the first session. Sohail had dropped Mithun off a luckless Yasir at wide second slip when the batsman was on 22 but compensated for the lapse with two wickets. Yasir failed to get a wicket in 22 overs, conceding 83 runs.

Earlier, the extended two-and-a-half hour first session due to Friday prayers truly belonged to Pakistan as they kept Bangladesh down to 95-3 by lunch. Shaheen, 19, removed debutant Saif Hassan (nought) off the third ball of the match and then had skipper Mominul Haque (30) to get vital breakthroughs for Pakistan. Abbas trapped opener Tamim Iqbal with the 10th ball of the match for three to leave Bangladesh tottering at 3-2.

Iqbal, who last Sunday smashed Bangladesh's highest first-class score with 334 not out in a domestic match, tried to play across but missed the ball.  Umpire Nigel Llong of England had rejected the appeal but Pakistan wisely had it reviewed and the replay showed the ball hitting the stumps.

Haque and Najmul Hossain Shanto (44) revived the innings during their third wicket stand of 59 before Haque miscued a drive and was caught behind by wicketkeeper Rizwan off Shaheen. Haque smashed five crisp boundaries during his confident knock. Shanto, whose previous best of 18 was against New Zealand in 2017, fell soon after lunch when he edged one from Abbas to Rizwan. He hit six boundaries. Mahmudullah, who was shaping well with four boundaries in his 25, played a rash shot off Shaheen and was caught brilliantly at gulley by a leaping Asad Shafiq.