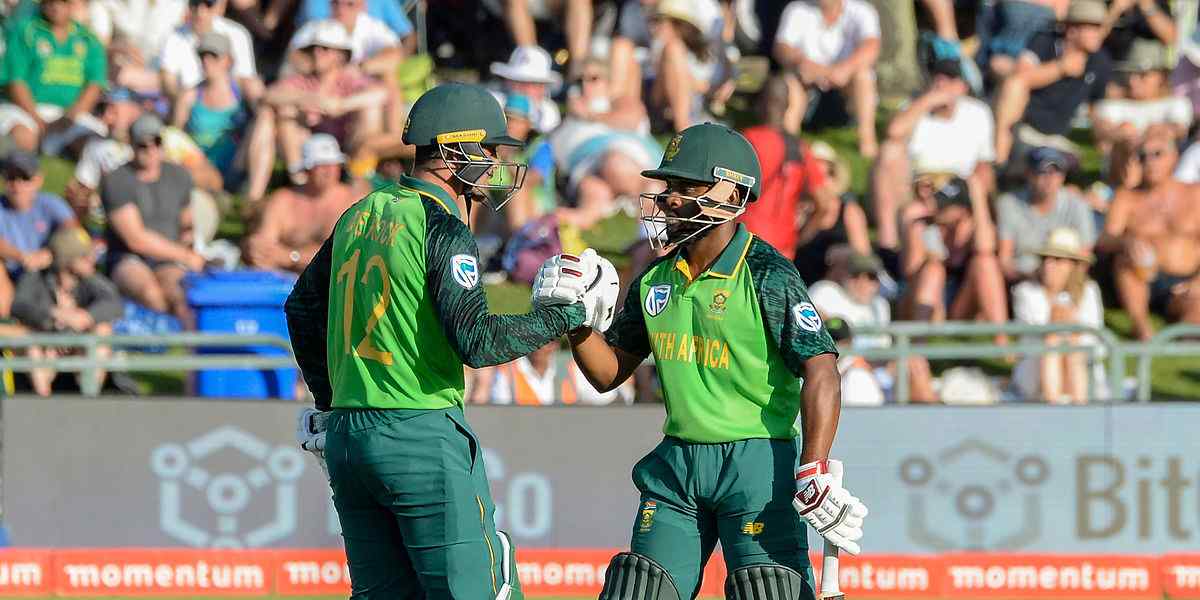 After a below-par campaign at the 2019 World Cup, South Africa came into the ODI series against England with a few new faces and a new captain. They had also rested two of their most experienced players in Faf du Plessis and Kagiso Rabada.

While this series against the world champions is expected to be a tough one for the Proteas, in the first ODI at Newlands in Cape Town on Tuesday, South Africa cruised to an easy seven-wicket win. Newly-appointed captain Quinton de Kock, Temba Bavuma and Tabraiz Shamsi were the stars of the show for the hosts on the day.

Chasing a target of 259, South Africa lost the wicket of Reeza Hendricks (6) early with Chris Woakes getting the breakthrough for England. While the score read 25/1 at that point, it was all one-way traffic thereafter as De Kock and Bavuma put on a partnership of 173 for the second wicket in a flawless display of batting.

The added pressure of captaincy didn't seem to have affected De Kock. Instead, he cherished the opportunity and led from the front, notching up his 15th ODI century. He rarely looked in trouble during his knock, hitting 11 fours and one six en route a 113-ball 107.

At the other end, Bavuma - who was playing in his first ODI since 2017 - was also in sublime touch. The 29-year-old had a false shot percentage of just 10.6 during his innings which shows that he was in supreme control of his shots during his stay at the crease. He was very unfortunate to have not brought up a second ODI hundred as he was dismissed for 98 by Chris Jordan.

When Joe Root broke the partnership between de Kock and Bavuma in the 36th over, the damage was already done for Eoin Morgan's side. Rassie van der Dussen, who had an impressive start to his ODI career in 2019, scored an unbeaten 38 as the hosts successfully chased down the target with more than two overs left.

Unsurprisingly, de Kock was named the Player of the Match.

Earlier, after South Africa won the toss and elected to bowl first, Jason Roy got England off to a quick start, scoring a run-a-ball 32 before he was dismissed by debutant JJ Smuts. It was a crucial breakthrough for the hosts as Roy and Jonny Bairstow had put on a 51-run stand for the first wicket and the former was looking in fine touch.

Bairstow soon followed his opening partner back to the pavillion for 19 after he presented a simple catch to Lutho Sipamla off the bowling of Andile Phehlukwayo.

Shamsi then came into the attack and dismissed England captain Morgan in his first over with Bavuma completing an excellent catch in the slips. It was a huge wicket in the context of the match as just a ball earlier, a mix-up between Root and Morgan - combined with a splendid piece of fielding from van der Dussen - resulted in the former getting run-out for 17.

The World Cup winners went in with a long batting line-up and it proved to be vital here. With England in deep trouble, Joe Denly and Woakes stitched together a 91-run partnership for the seventh wicket which helped their team recover from a dire situation.

While Woakes was dismissed by Sipamla - his maiden ODI wicket - for a 42-ball 40, Denly formed a crucial 32-run partnership with Tom Curran before miscuing a slower delivery off Beuran Hendricks in the final over of the innings. By then though, the 33-year-old's knock of 87 - which included six fours and two sixes - had already helped England get to what looked like a competitive total of 258/8. But in the end, it was well short of a winning score for Morgan and co.

The two teams will next face each other in the second ODI in Durban on Friday. With this being a three-match series, it will be a must-win game for the away side.