U19 WC: Can Australia break the jinx against India?

U19 WC: Can Australia break the jinx against India?

Here we look at three players each from both sides who could play a crucial role in the all-important clash.

India will face their biggest challenge in the 2020 Under-19 World Cup when they come across Australia in the Super League Quarter-Final at Senwes Park in Potchefstroom on Tuesday (January 28). The Priyam Garg-led side have been unbeaten so far in the tournament and have looked a class above all, while Australia had to fight their way into the quarter-finals.

The Men in Blue looked untouchable in all the three group-stage games. Openers Yashasvi Jaiswal and Divyansh Saxena have been in solid form, while legspinner Ravi Bishnoi has done most of the damage with ball in hand. The defending champions outclassed Sri Lanka and Japan in their first two encounters before getting the better of New Zealand in a rail-curtailed match.

Meanwhile, Australia have already been part of two close-fought encounters. They lost to West Indies by just three wickets in their first game of the competition but managed to smash Nigeria by 10 wickets. They were then involved in a do-or-die match against their arch-rivals England which they just managed to win by two wickets, courtesy Connor Sully's blistering cameo, to progress further in the tournament.

Australia's senior team might have dominated the Men's World Cups but when it comes to the U-19 World Cup, India have been the most successful side. India have won the tournament four times, which is the highest amongst all teams, while Australia have won it thrice. Since the 2018 World Cup, India haven't lost a single game in this tournament. They have won nine games (6 in 2018 and 3* in 2020) in a row and also have a superb record against Australia. 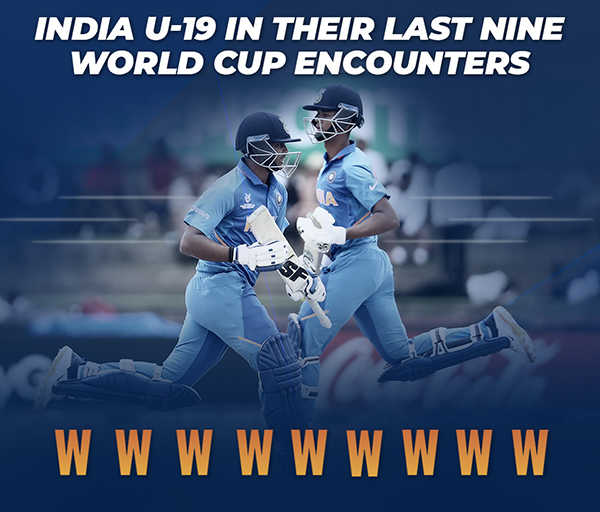 The two teams have faced each other six times in the World Cup, with India emerging victorious the last four occasions, while Australia won the first two (1988 and 1998). Australia also haven't beaten India since their last win on April 7, 2012 in Townsville. The two sides have played nine games since then and India have won eight of them, while one match was washed out. As a team, India are way ahead, both in terms of quality as well as temperament. India might have an upper hand, but at no level or format you can count Australia out.

Both teams comprise of fantastic players, but here we look at three each from both sides who could play a crucial role in the all-important clash.

Jaiswal is yet to score that big hundred but the left-handed opener has contributed in all three games. Known for having all the big shots, Jaiswal has played with a lot of maturity and has given India a good start in all the matches. The 18-year-old scored a 74-ball 59 against Sri Lanka before going for a needless shot and ended up being caught behind. After India bowled Japan out for a mere 41 runs, he hardly had anything to do and slammed an unbeaten 18-ball 29 to wrap up the match inside five overs. He was looking solid on 57 and had added 115 runs with his fellow opener Divyansh Saxena against New Zealand before rain cut short India's innings and the Black Caps were set a target of 192 in 23 overs, which they couldn't overhaul. Jaiswal will now look to convert those starts into something big against Australia and put them under pressure from the word go.

The Indian captain has got only one opportunity to bat so far in this tournament in which he scored a vital 56. The right-hander from Uttar Pradesh walked in to bat at No. 4 and was sedate with his approach, setting a perfect platform for the likes of Dhruv Jurel and Siddhesh Veer. The 19-year-old has also done a terrific job as a captain, especially with his bowling changes. The middle-order hasn't been tested yet and we have seen it in the past where teams, who have dominated the group-stage, ended up having one bad day and were out of the tournament just like that. Indian middle order will have to be ready if such a situation arises and Garg will be expected to play a key role. He has done it for his state in the past and has all the ingredients to be India's crisis man.

No one can deny the emergence of wristspinners in white-ball cricket in recent times, and the top three leading wicket-takers - Shafiqullah Ghafari (14), Bishnoi (10) and Tanveer Sangha (10) - of this ongoing event are all legspinners. For India, Bishnoi has played a key role in all three matches. The 19-year-old, who was bought by Kings XI Punjab for INR 2 crore in the 2020 auction, has had figures of 2 for 44, 4 for 5 and 4 for 30 so far in this tournament. The opposition batsmen have struggled to read Bishnoi who has solid control over his googlies. Australia themselves have some good spinners in their squad and will look to put pressure on India's premier bowler. However, that tactic could very well work in Bishnoi's favour. 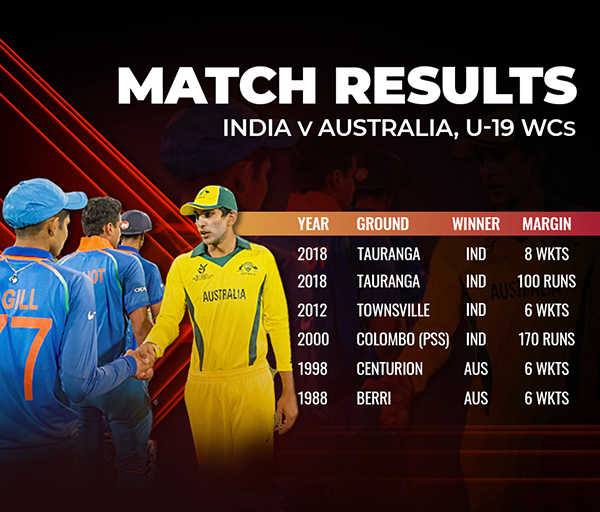 The right-handed opener likes to play an aggressive brand of cricket and has a striking resemblance to Steve Smith. Fraser-McGurk scored 84 off 97 deliveries in Australia's first match of the tournament in which they were bundled out for 179 in 35.4 overs. He didn't have much to do in the second match against Nigeria and was pinned right in front of the stumps for just 11 against England. The 17-year-old has already made his first-class and List-A debut for Victoria and has a fifty to his name in both the formats. Australian legend Shane Warne has already termed him as a future Test star, and a quarter-final against India will give him a platform to make a big statement. He however will need enough support from the likes of Sam Fanning, skipper Mackenzie Harvey and Lachlan Hearne.

Two wickets in hand and 40 needed off 18 deliveries, Australia were down and out in their last group-stage game against England, but then Connor Sully happened. The 19-year-old smoked three maximums and a four in the 18th over to bring his team back in the game and then finished the job off the final delivery of the match. He has also done a decent job in the bowling department in the two games that he has played. The bowling all-rounder might even be used as a pinch-hitter against India who have an all-round bowling attack. However, his premier job will be to pick up wickets with the new ball and put India on the back foot early in the innings.

The 18-year-old legspinner has been Australia's most impactful bowler in this competition. Sangha has 10 wickets to his name, with his best 5 for 14 coming against minnows Nigeria. He also scalped four wickets against West Indies after Australia were bowled out for a below-par total but couldn't save his team from defeat. Sangha, who signed a deal with Sydney Thunder late last year, only managed one wicket against England and will not have it easy against Indian batsmen who are generally very solid against spinners. Sangha will have to find the right balance between going for wickets and keeping the runs down in the middle overs and if he manages to do that, Australia will have a great chance of breaking their jinx against India.