A 100-run partnership in England after 14 years 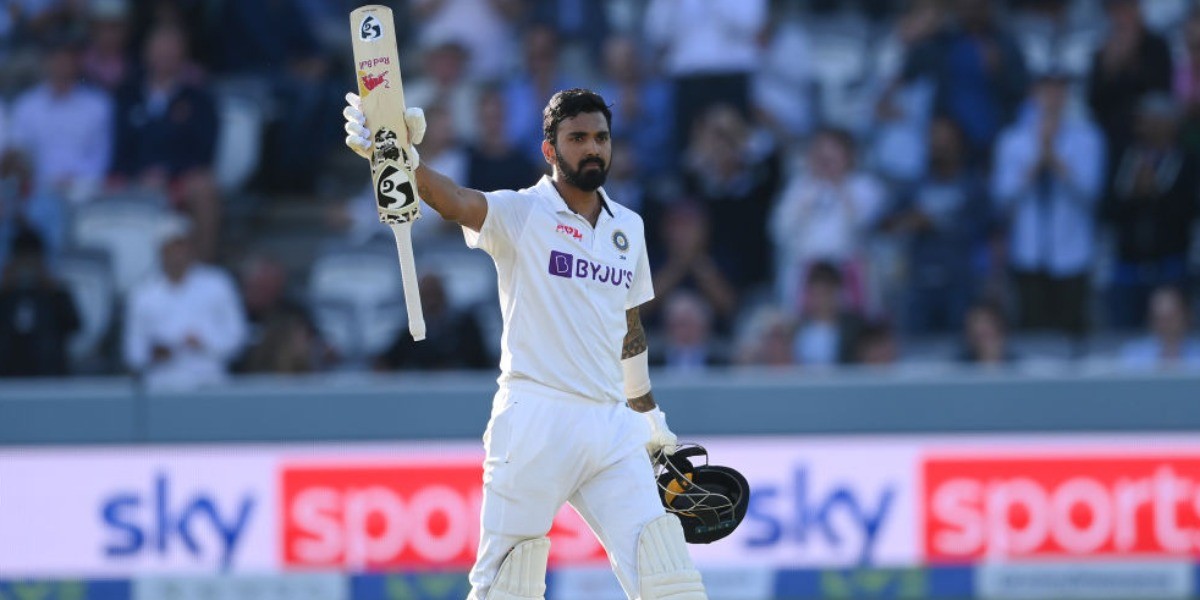 A 100-run partnership in England after 14 years

After a wash-out on the fifth day of the first Test at Trent Bridge, the weather was supposed to be sunny and dry for the first day of the second game. But, there were short spells of rain that delayed the toss and hampered the first session. However, the clouds opened up and the sun started to beat down in the third session, which meant they could continue till 7 PM British time in order to complete the days quota of overs.

Indian batting first after losing the toss, were off to one of the best starts in years. A century run stand between Rohit Sharma and KL Rahul laid the platform before the latter completed a sensational 100. It was good to see Virat Kohli amongst the runs, but, still not the form he is searching for. India ended up on 276 for three on the back of an unbeaten 127 from Rahul. There were few milestones on route India’s innings, here are few of them.

English conditions are one of the toughest ones for the openers, especially for Asian teams who aren’t accustomed to those. India, in this century (Since 2000) had only one opening partnership of 100 and that was in 2002, which is 14 years back. In the first Test, Rohit and Rahul were close to registering a century partnership (97) but, Rohit was dismissed. In today’s match, the pair not only negotiated the early threat but also laid the foundation for a fantastic day with a 126-run partnership. In England since 2000, this was India’s second highest opening partnership after Wasim Jaffer and Dinesh Karthik’ 147 in 2007 in Nottingham. There were few other records too: 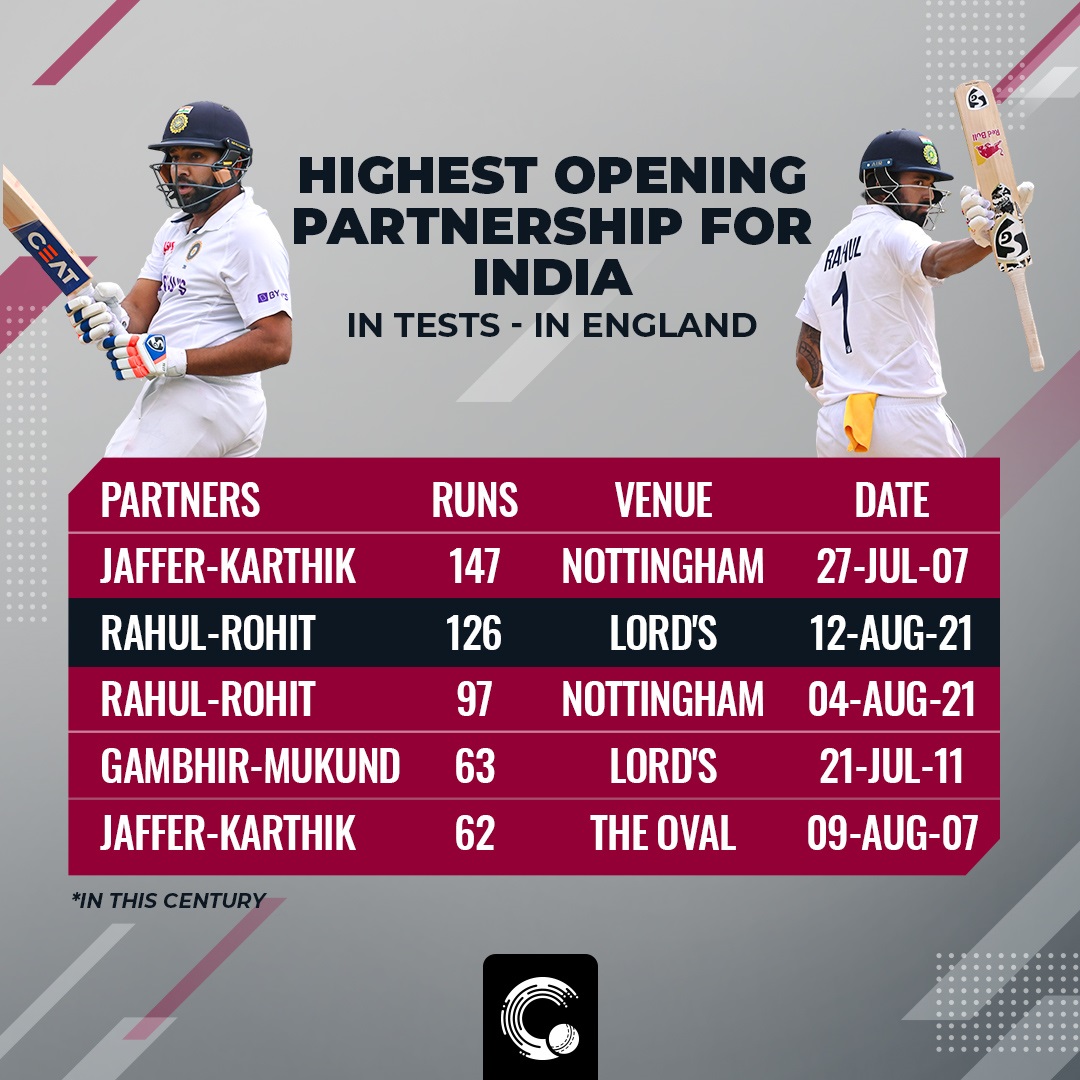 - In Tests at Lord’s in this century, Rohit and Rahul are the only non-English opening pair to register a century partnership in the first innings.

- In Tests at Lord’s, the 126-run opening partnership is the highest in the first innings for a team that had lost the toss and were asked to bat. Previously, Sir Andrew Strauss and Sir Alastair Cook had scored 114 against South Africa in 2008.

- In Tests in England in this century, only two other away opening pairs have played more overs than Rohit and Rahul’s 43.4. Herschelle Gibbs and Graeme Smith in 2003 (74.5) and Stephen Fleming and Mark Richardson in 2004 (51.4).

Rohit’s career took a U-turn when he started to open. First in the limited overs format and then in the longer format. But, the opener is yet to register a century in away conditions. Since he started to open the innings, in away/neutral conditions, Rohit has four scores between 30-49, one score of 52 and today, he registered 83. He has been getting starts but, not able to convert. Regardless of that Rohit set his highest score in away/neutral matches. His previous best was 79 against Sri Lanka in 2015.

Coming in as an injury replacement for his Karnataka partner Mayank Agarwal, Rahul has used the opportunity to full effect. In the first Test, he missed out on a century by 14 runs. However, in the second Test, he reached it with grand style. Rahul became only the third Indian opener to register a century at Lord’s. Vinoo Mankad (184) in 1952 and Ravi Shastri (100) in 1990 are the other two. 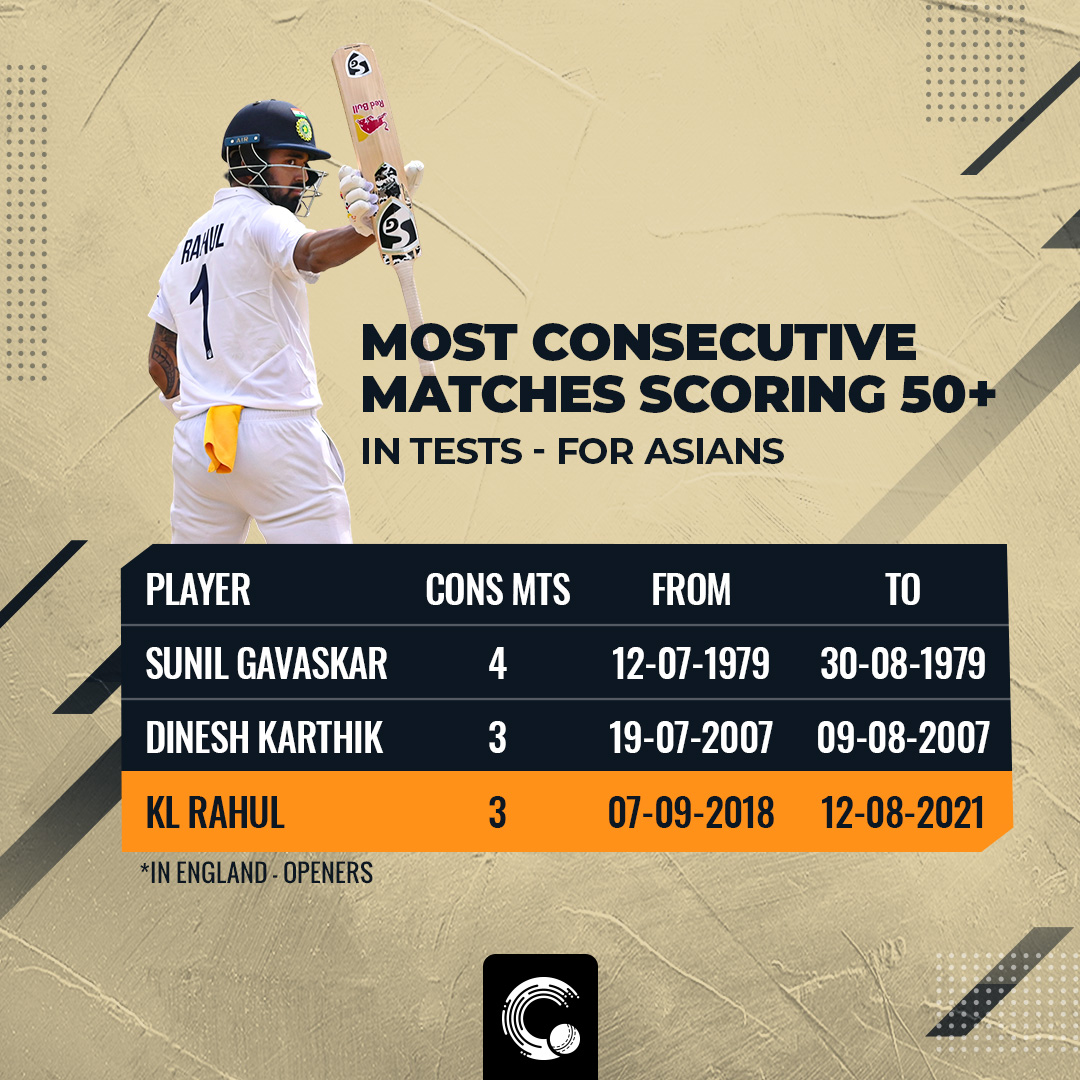 Regardless of how his 2018 tour of England went, in the last three matches, Rahul has been stupendous. Starting from the Oval encounter in 2018, Rahul has had scores of 37 & 149, 84 & 26 and 127*in this innings. Only two other Asian players have had three 50+ scores in three consecutive matches and both are Indians. Sunil Gavaskar in the 1979 tour had hit a 50+ score in all four matches and Dinesh Karthik in 2007 tour had hit three 50+ scores in as many matches.

India are in a commanding position at the end of day one, scoring 276 runs for just three wickets. The credit goes to Rahul and the two partnerships he has been involved in. Firstly, the opening partnership of 126 and second with the skipper Kohli (117). In the 17 matches played at Lord’s prior to this, India never had multiple century partnerships in an Innings. The record was broken today.