A remarkable career hampered by injuries 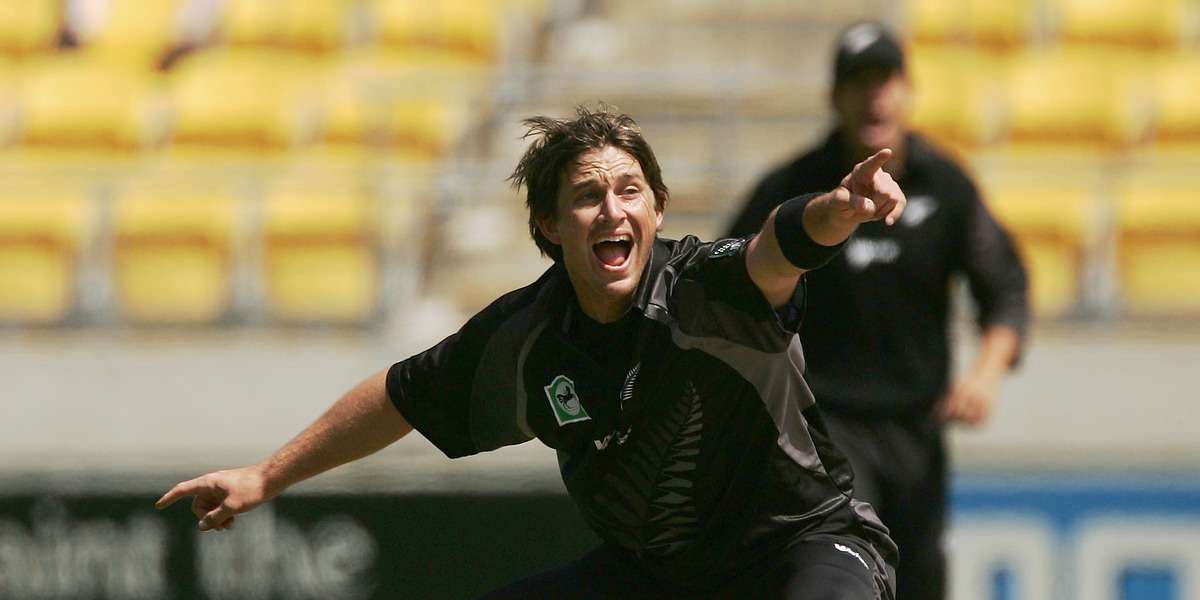 A remarkable career hampered by injuries

7th June in 1975 in Canterbury, Christchurch, saw the birth of probably one of the best New Zealand fast bowler - Shane Bond.

Eras have passed but the response to the debate on whether speed or a combination of control and swing at a ginger pace is a more necessary quality for a pacer is yet to find an ultimatum. In and out of that discussion, there come a few special cases of fast bowlers who have managed to master both. There is no question that Shane Bond is one of them.

Envision a dark, gloomy cloudy day and a steamy fast bowler running in towards the batsmen. This is a nightmare of any dreamy batting line up even when the bowler at the other end is not a completely fit Bond. Completely fit! The phrase even Bond would have loved to be associated with more. He always had the promise in him to become one of the best bowlers that New Zealand produced after Richard Hadlee.

A series of injuries stood in between him and his cricketing career. It started with a stress fracture to his back that occurred just after the 2003 WC. He had to go through a surgery in which his spine was fused with titanium wires and it took him out of commission for two years. Even after his return in 2005, the injuries never untagged the quickie. A knee injury followed by an abdominal tear plagued him. Despite his injuries, he never compromised on speed and intensity, probably a reason for him being injury prone. He played 18 Tests, 82 ODIs and 20 T20Is in his career accounting for 87, 147 and 25 wickets respectively.

It is never easy for a fast bowler to play Tests with the kind of a back-injury Bond suffered. Even though he played less number of Tests, Bond was a genuine wicket-taker. A staggering bowling average of 22.1 at a stunning strike rate of 38.7 was certainly a proving point. Among bowlers who have bowled a minimum of 500 overs, his strike rate of 38.7 is the 2nd best in Tests behind George Lohmann of England. His best innings and match figures came in the same match against Zimbabwe in Bulawayo in 2005. He bagged 6/51 in the 1st innings and 4/48 in the 2nd ending with match figures of 10/99.

In 18 matches, he bowled in 32 innings and never went wicket-less, a rare feat. In fact, among the bowlers with wickets every time they came out to bowl, Bond has done for the highest number of innings. 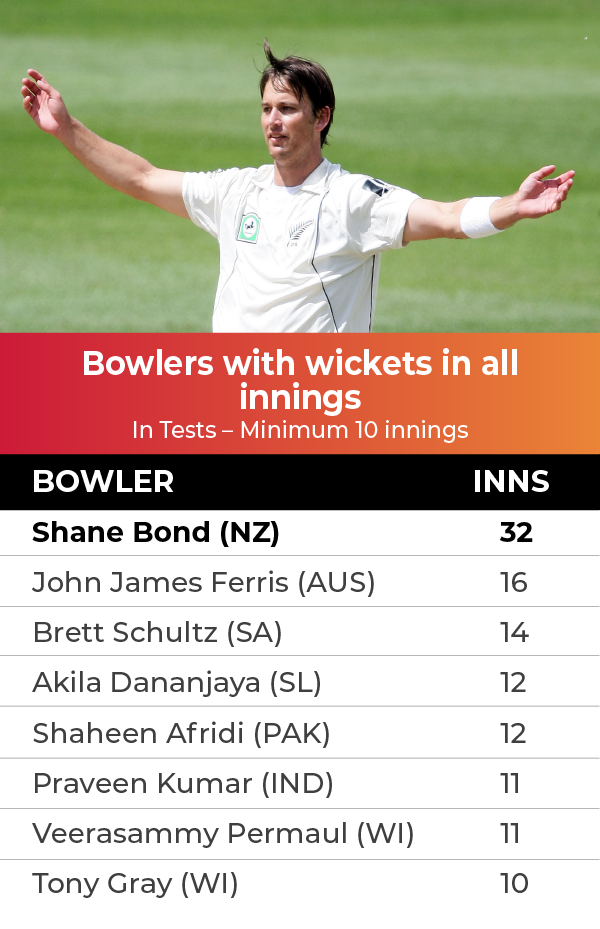 Bond was prolific even in the shorter format of the game. Stupendous numbers directing that when in pitch-perfect rhythm, he could rattle any batsmen with his genuine pace and swing. He had a remarkable low bowling average. His overall bowling average of 20.9 is the 3rd best among fast bowlers with more than 100 wickets in ODIs. Even with staggering overall numbers, to judge a bowler as a match-winner, the contributions made in wins matter a lot. On this context, Bond was a match-winner of his time. Out of the 147 ODI wickets, 90 of them came in wins which is nearly 62%. He snared those 90 wickets in wins at an exceptional bowling average of 16.7, which is the 2nd best among pacer after another New Zealander, Sir Richard Hadlee.

In the epoch of Bond’s bowling career, Australia’s batting line up was impeccable. Bowling against the likes of Matthew Hayden, Ricky Ponting, Adam Gilchrist, Damien Martin and few other batsmen at their peak was always a challenge. However, those big names didn’t make any difference in Bond’s career. He took a liking towards the Australians, especially against the then skipper, Ponting, whom he dismissed more than any batsmen in his career - 7 times. In 17 ODIs he played against Australia, he bagged 44 wickets at a bowling average of 15.8 and a strke rate of 21.4. Three of his four 5-wicket hauls in ODIs were against Australia, including a hat-trick against them. His fiery spell of 6/23 in the 2003 World Cup was monumental. Even though New Zealand lost the match, he thundered through the Australian batting line up, which was an eye-treater.

His ODI career has been undeniably a grand success. In his era or in that decade from 2001-2010, Bond can be put in the same bucket as the legendary bowlers like Glenn McGrath, Muttiah Muralitharan, Waqar Younis and Wasim Akram. Though he doesn’t have many wickets to his name or a lengthy career as others, he was as effective as them. When compared on average or strike rate, he pops up within the top 5. Bond was the 2nd quickest pacer to 100 ODI wickets in terms of matches. 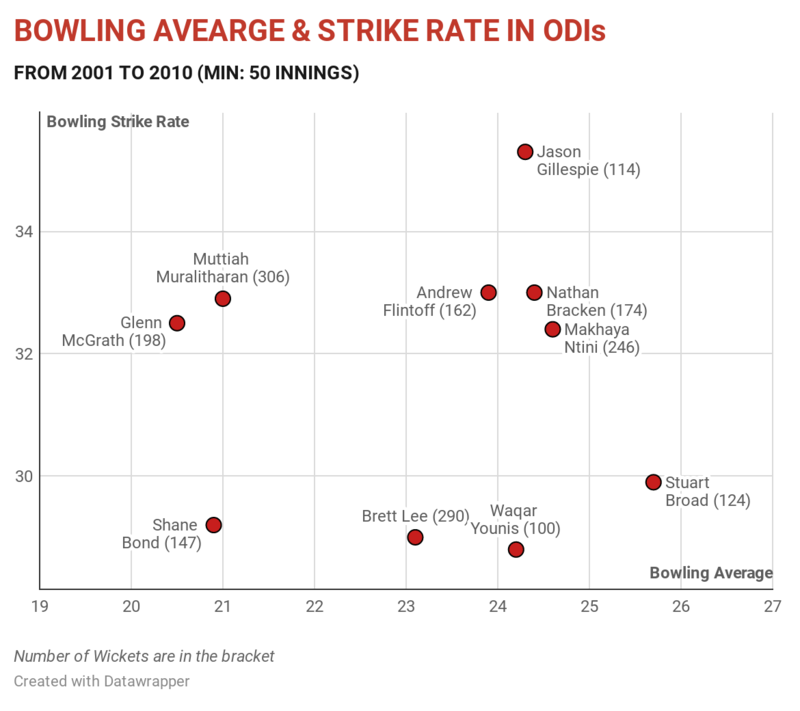 BOND’s EFFECT ON SOUTHEE AND BOULT

After his retirement, Bond was appointed New Zealand’s bowling coach alongside Mike Hesson, who is termed as the ‘super coach’. Their partnership did wonders for the Kiwis. They did not lose a single home Test series in that period. They won their first-ever ODI series against the Proteas in South Africa and one of their major achievements was reaching the finals of the World Cup 2015. New Zealand, before the 2015 World Cup had made it to the Semi’s on 6 occasions losing every one of them. 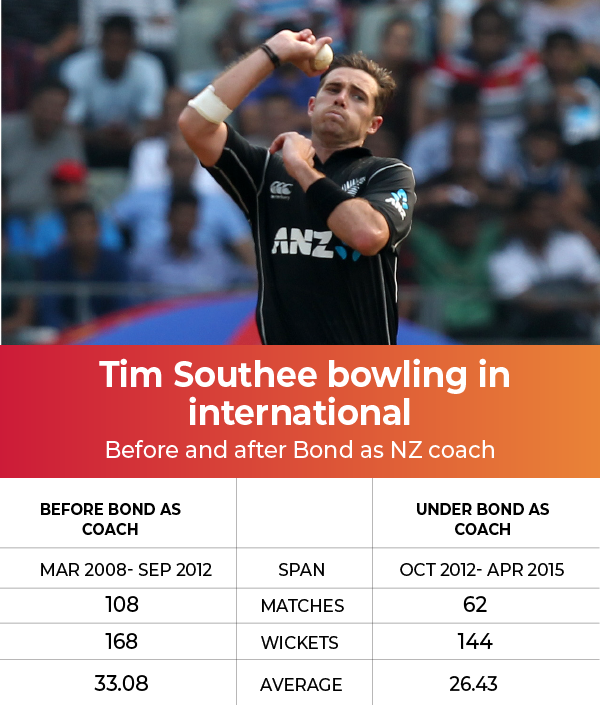 Boult was just 9 international matches old when Bond took over the mantle and a rookie like him was lucky to have a recently retired pacer like Shane Bond coaching the team. Boult had a sensational 2013 in Tests where he bagged 46 wickets but didn’t play much of limited over games that year.

Irrespective of the format, the combo of Southee and Boult is certainly a deadly one, especially with the new ball. In his time, one of the coaches who bought the better out of these two was also a deadly assassin. Bond with his raw pace, high intensity, thundering in towards the batsmen was a treat to the lovers of fast bowling. He could huff and puff any batsmen, even when they were at their pinnacle. Unfortunately, an injury struck body couldn’t support his cause.