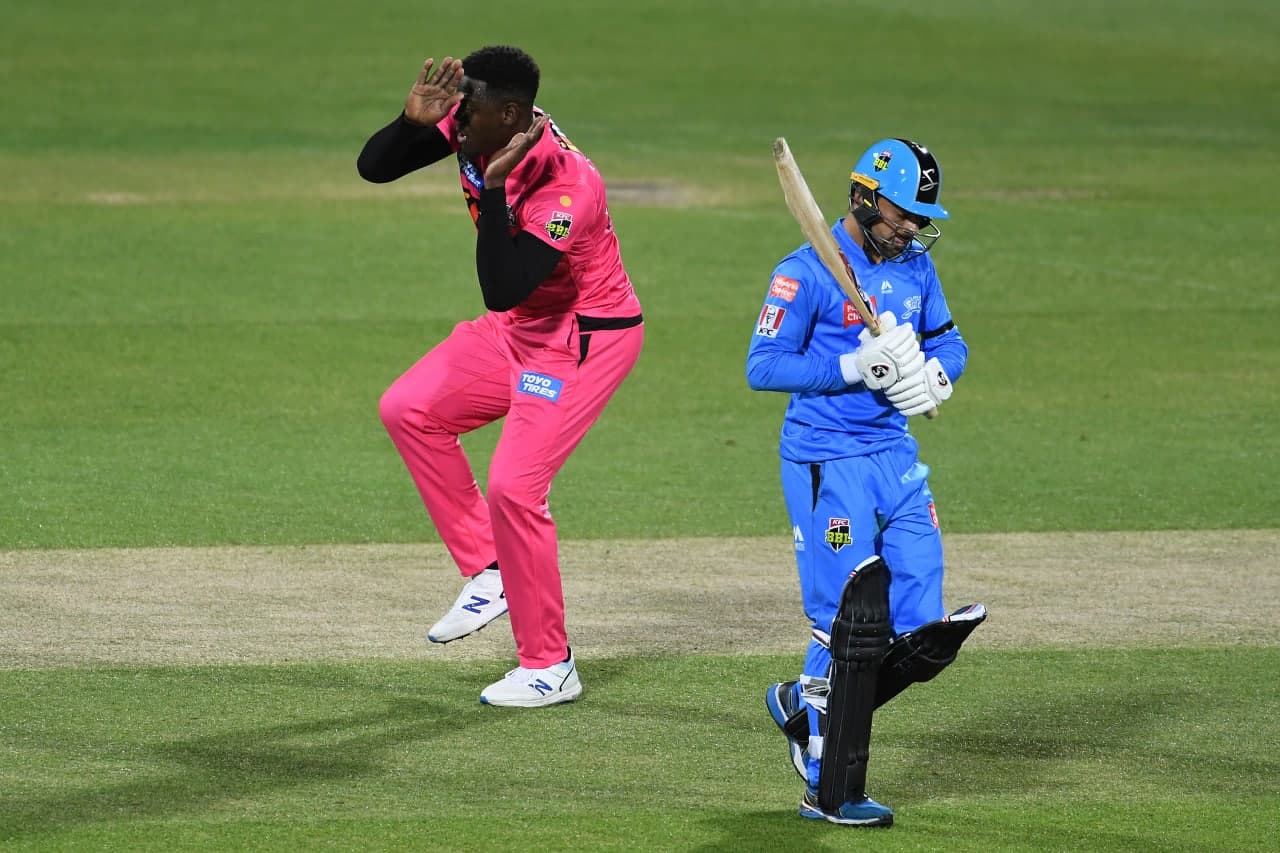 Here are a few tips that might help you to create your fantasy teams for the 26th match of BBL 2020-21, between Adelaide Strikers and Sydney Sixers at Carrara Oval

The Big Bash League 2020/21 has begun in earnest and teams are fighting, with all their might, to make it to the top five. The Sydney Sixers have won four matches out of six and have garnered seventeen points out of a possible twenty-four. The defending champions won four on the trot before losing to Brisbane Heat by four wickets in their most recent contest.

Adelaide Strikers, on the other hand, have won three games out of six and are placed fourth on the points table. The Scorchers beat them in their previous fixture by seven wickets.

The Carrara Oval has hosted three games so far in BBL 20/21 and the teams batting second have won all three. Win the toss and bowl first will be the mantra for all the skippers at this ground. The average first innings score at the venue is a high 176 and the wicket does not seem to slow down as the game progresses.

Bowlers concede 9.3 runs/over at the venue. Pacers and spinners leak 9.4 and 9.2 runs/over respectively. Sydney Sixers have a 100 per cent win record at the Carrara Oval this season. They won both their matches with one ball to spare. The Strikers and Sixers have some nifty stroke makers in their ranks and this contest promises to be a humdinger.

Right-arm pacers have been the most successful breed here. They have bagged 22 wickets out of 36. Wes Agar (11), Peter Siddle (10), Ben Dwarshius (10) become favourite choices. Alex Carey has controlled the middle overs to a nicety while Josh Philippe and skipper Daniel Hughes are the men in form from the Sixers' corner. Steve O'keefe has operated with guile and his inclusion will add variety to your fantasy XIs. 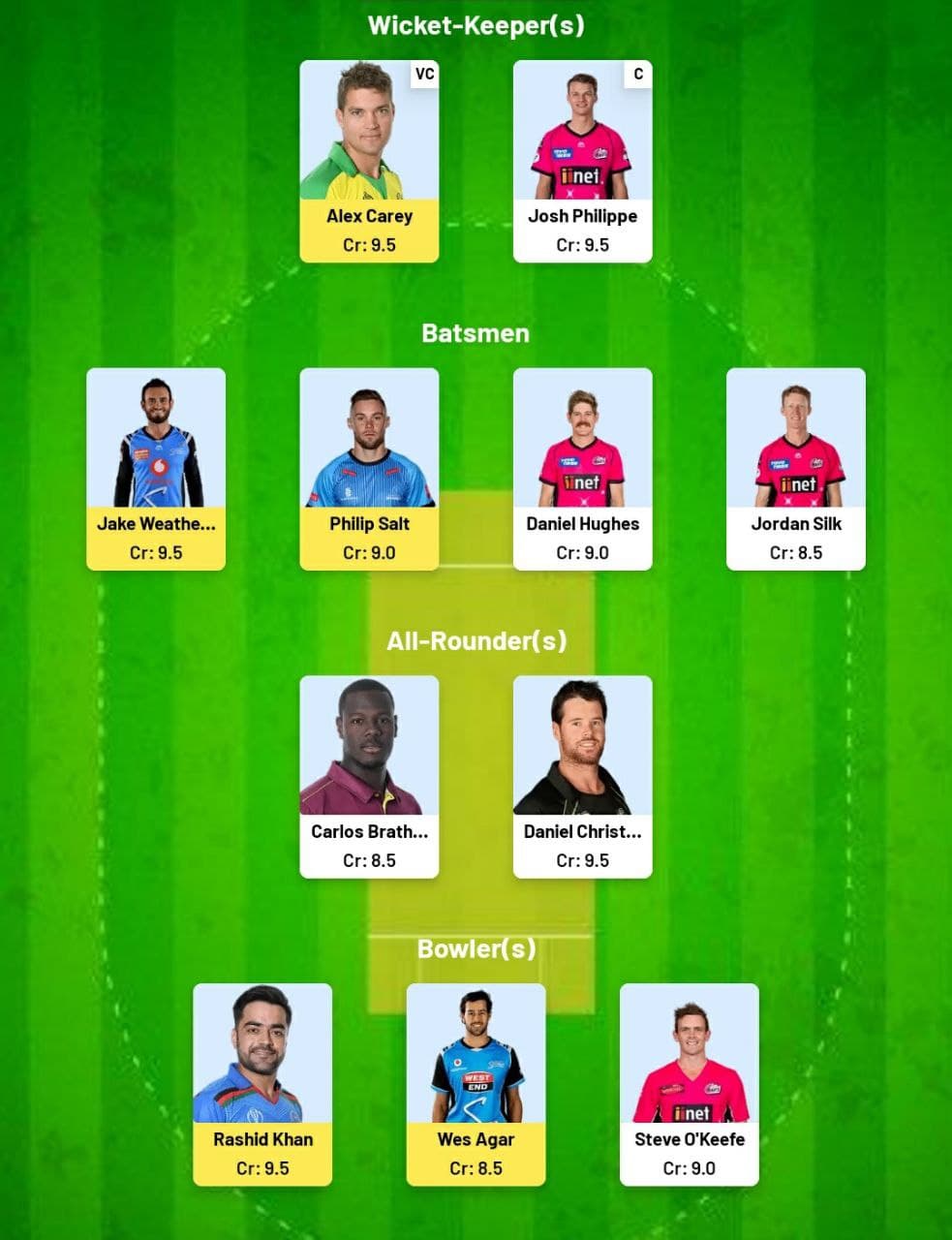 While you could go for the above team, you also have the option of choosing your team from Cricket.com’s Fantasy Research Centre. Based on algorithms we come up with six different teams that could fetch crucial points. 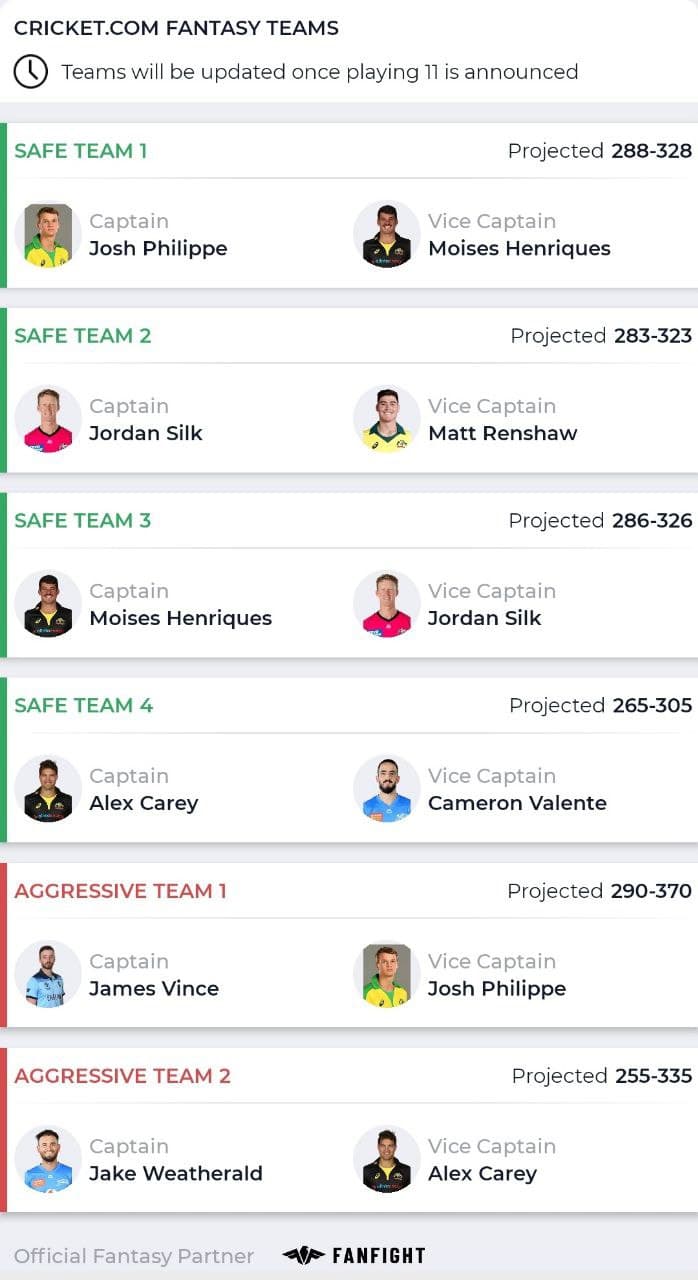 Josh Philippe has been in red hot form in BBL 20/21. The wicket-keeper batsman has scored 220 runs at 36.66 and has struck them at 140.12 runs/hundred deliveries. 56.3% of his runs have come off boundaries and the talented batter scores a boundary every 5.6 deliveries. The youngster has the ability to score big and he can help you pile on those fantasy points. 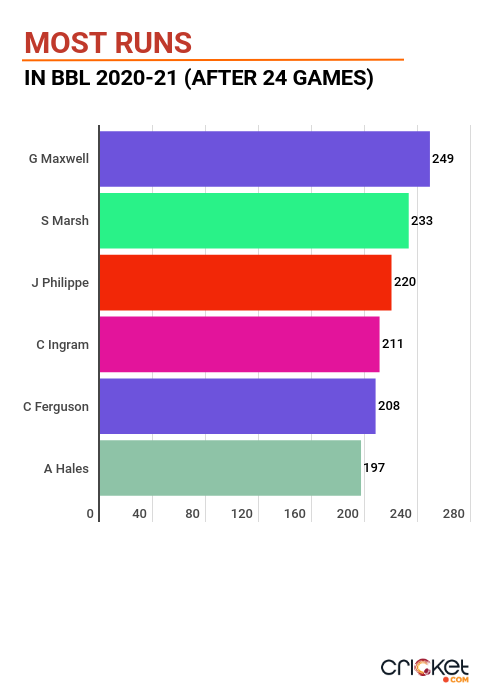 Alex Carey's 82 off 59 deliveries was not enough to see his team through in their previous fixture, but the classy southpaw has looked a million bucks whenever he's come out to bat. The left-hander has already notched up two fifties in 4 BBL innings this season. Carey's ability to churn strike and clobber the white kookaburra out of the park makes him a player to keep a keen eye on. His contribution behind the stumps can also earn you some crucial fantasy points.

Wes Agar and Peter Siddle have been the strike bowlers for Adelaide this season. Agar is now the leading wicket-taker in BBL 20/21 with 11 scalps and has bagged at least one wicket in all six games. The sturdy pacer can vary his pace, smash the deck hard and bowl the yorker at will. The right-arm pacer has all the qualities to be ‘The Game-Changer’.

Our Criclytics player projector predicts Agar could pick 0-1 wicket(s) in this contest. 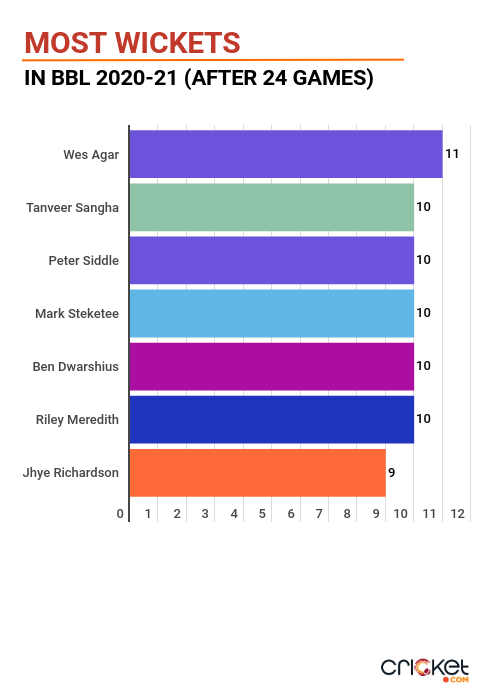 Daniel Christian has won every major T20 trophy there is. Christian's 'around the stumps' tactics in the death overs has worked for the Sixers. He's picked 8 wickets so far and has chipped in with cameos in the final overs. His strike-rate this season is a colossal 215.21 and the last time the two sides met the all-rounder smashed a 15-ball fifty.

Our Criclytics player projector predicts Christian to score 10-27 runs and bag 0-1 wicket against the Strikers.