Albie Morkel: Namibia’s success has awakened a little giant in the country 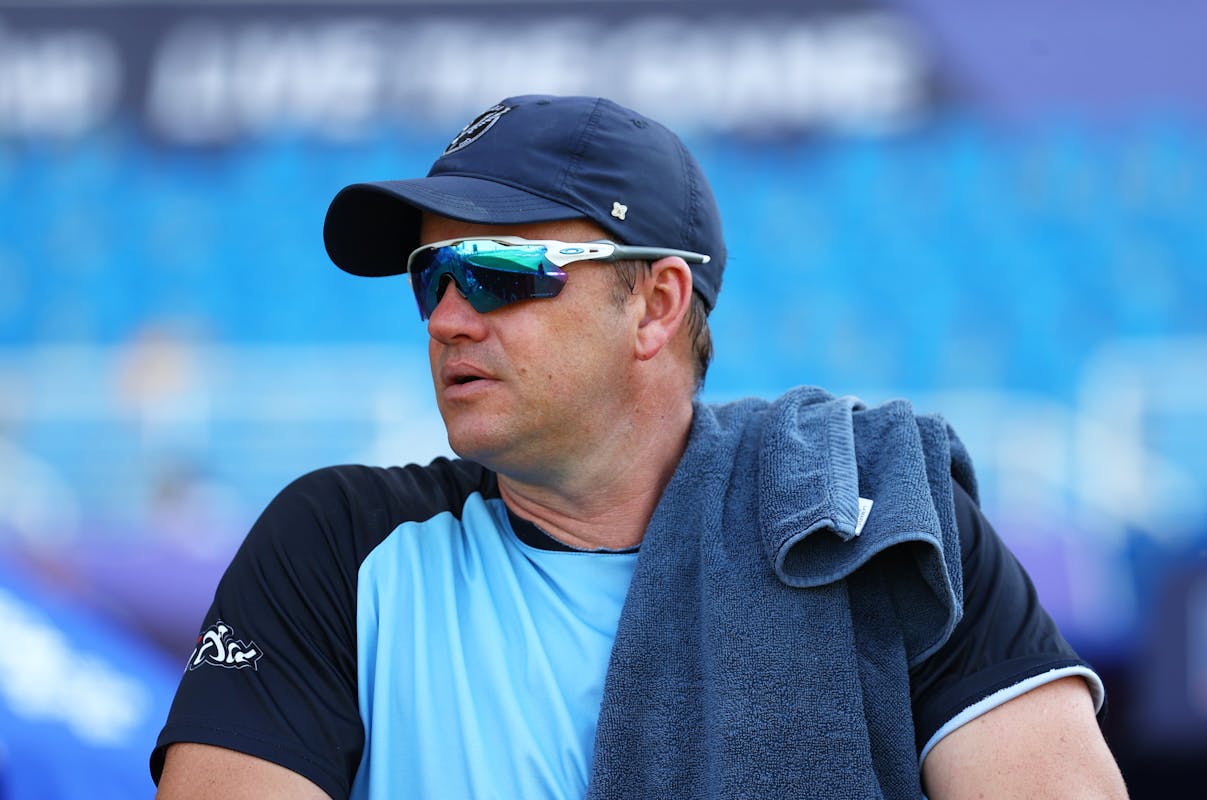 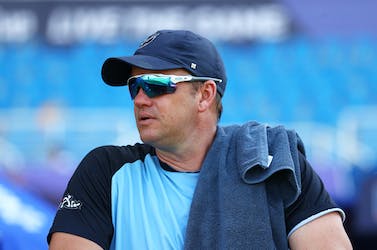 Albie Morkel: Namibia’s success has awakened a little giant in the country

The former South Africa all-rounder, who took up the assistant coach's role after his playing days talks to Cricket.com on Namibia's rise, what it means to the country, the side's preparation for the T20 World Cup and more

With his playing days behind him, Albie Morkel, one of South Africa’s top all-rounders in white-ball cricket, has gone through the natural transition of going into coaching. He perhaps took on an assignment as challenging as they come – a coaching stint with the Namibian national side. However, he had a friendly face in the set-up leading the way in Pierre de Bruyn – a former teammate at Northerns.

Together, de Bruyn and Morkel have brought the cricketing culture back in Namibian cricket, which was lacking over the years and are now on the verge of playing in their second T20 World Cup in as many years, which has once again revived Namibian cricketing fortunes, marking this as the best phase in their history by some margin.

In an exclusive chat with Cricket.com, Morkel opens up about the structure in Namibian cricket, on what their qualification to back-to-back World Cup means to people back home, their scouting system and much more.

Cricket.com (CDC): You entered the coaching setup with Namibia right after your announced your retirement from all forms of cricket. What prompted you take up this move and how pleased are you with the progress Namibia have made since then?

Albie Morkel (AM): My [playing] career got cut shot by COVID. I had to look for [other] opportunities early. The Namibia opportunity came along at the very same time which was an easy decision to make at that stage as I would still be involved with cricket even though it was a different role and in different capacity but it’s something that I wanted to do late in my career. The opportunity came a little earlier. It’s been very good. Something I’ve really enjoyed getting better at. It was a good move for me. It’s now four years down the line and we’ve done some pretty amazing things for this team.

CDC: Tell me a bit about Namibia's scouting system. We saw David Wiese play last year and I believe you convinced Ruben Trumpelmann to switch allegiance and both moves have paid off. How have you gone about with these recruitments and can we see such things in the near future?

AM: It’s quite difficult to get players from other countries into Namibia. Normally it’s a tedious process but with David’s [Wiese] parents being born there as well as Ruben’s [Trumpelmann], it’s a little bit easier. But there is a process you have to follow and it takes about a year for them to get their papers and stuff. They’re two big players for us. That’s exactly what we needed.

We needed another solid all-rounder, especially a right-handed bowler as well, because we’ve got about five left-arm bowlers. With Ruben, he was the extra pace we were looking for, which we didn’t have at that stage in the set-up. They just fitted in perfectly in the team. They’ve made some telling contributions for us.

CDC: The main concern for associate nations is perhaps the lack of interest among the locals. With Namibia on the verge of playing their second World Cup in as many years, do you think it has or will inspire more kids to perhaps take up the sport professionally?

AM: I think we can see it already. I can just go back to when we started there four years ago, there was nothing going on there in the club systems, the school systems. Cricket wasn’t that big, it was almost like a forgotten sport. With the way the boys have played, with the success they’ve had, they’ve awakened a small little giant in Namibia.

Kids are actively playing, you can see the Under-19s coming through and the general support from the public. These guys are being recognised in the streets now and that’s a sign that as a sportsman if you can do well and the people acknowledge you means you’re doing something right.

CDC: You have played with and against Pierre de Bruyn in domestic cricket and now both of you are associated with Namibia in a coaching capacity. How is it working with him on the other side of the fence?

AM: He’s a good guy to learn from. He’s a tough coach, he likes discipline, like structure, which is what was needed in a set-up like this, where things were a little bit all over the place. He was the perfect guy for the job to put those things in place and then get the players at the level they needed to be in all departments – fielding, batting, bowling, fitness, nutrition – all those things. 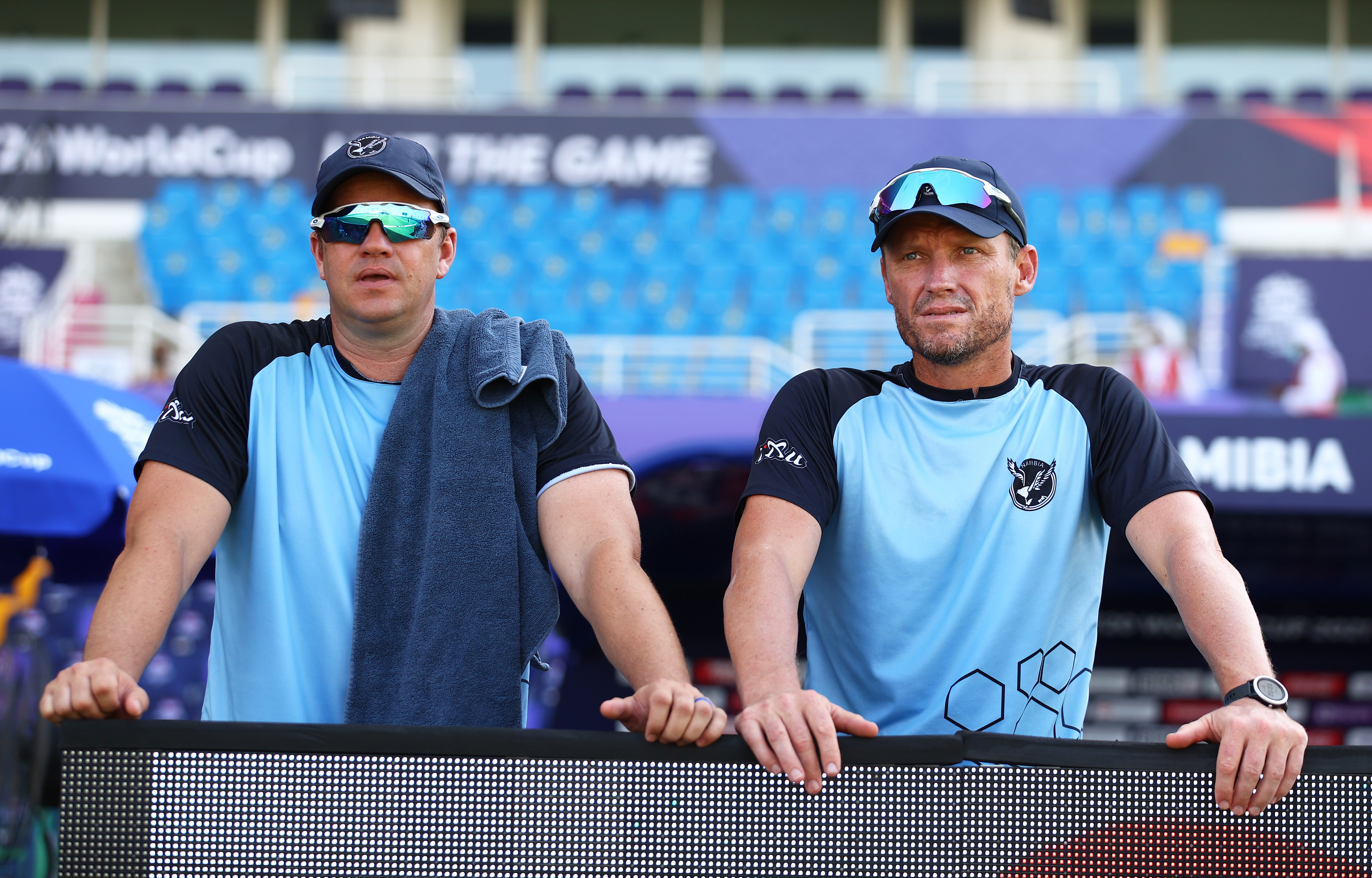 That’s the big thing about his success. He doesn’t leave any stone unturned in terms of those things. Even four years later, the pillars are still in place and that’s the way he coaches and gets good response from the players.

CDC: Also a word on skipper Gerhard Erasmus. He seems to be a calm and composed person while batting, bowling or fielding. How valuable has his contribution been in Namibia's rise over the last 2-3 years?

AM: He’s a massive player for us. He’s one of those guys even though he’s a good player and got talent, he’s got a sixth sense about the things on the field. He sees something happen even before it happens and that’s sometimes good or bad to have that as a leader. But as long as you can trust your gut and that’s what he does on those feelings, it could help you.

So, he’s massive for us, especially batting in the middle-order, he can play most situations, whether it is to play defensively, or knock the ball around or to knock the ball out of the park. He’s the perfect No. 4 for us.

Last year when he broke his finger during the World Cup, it was a big blow for us. Luckily, he pulled through the pain barrier to give us one or two good performances. I’m very excited to see what he is going to do this year. We’ve got a year more experience than last year. If we can get it right this tournament, we are going to play some exciting cricket.

CDC: Namibia have plenty of left-arm pacers up their ranks- Trumpelmann, JJ Smit, Jan Frylinck, Tangeni Lungameni in the squad. Left-arm pacers are generally considered the X-factors and you seem to have plenty of them. However, do you think the attack becomes a little one-dimensional or do you reckon each of them offers something different?

AM: To have one left-arm pacer is a luxury, we’ve got four. It does become one-dimensional. We’ll be looking to mix it up. Not all of them are the same. Ruben is the only guy who can swing the ball back at pace and the rest have got other skills. We’ll look at the conditions, see what’s needed on it. If we can play four left-arm seamers, at least we’ve got the luxury to do it. 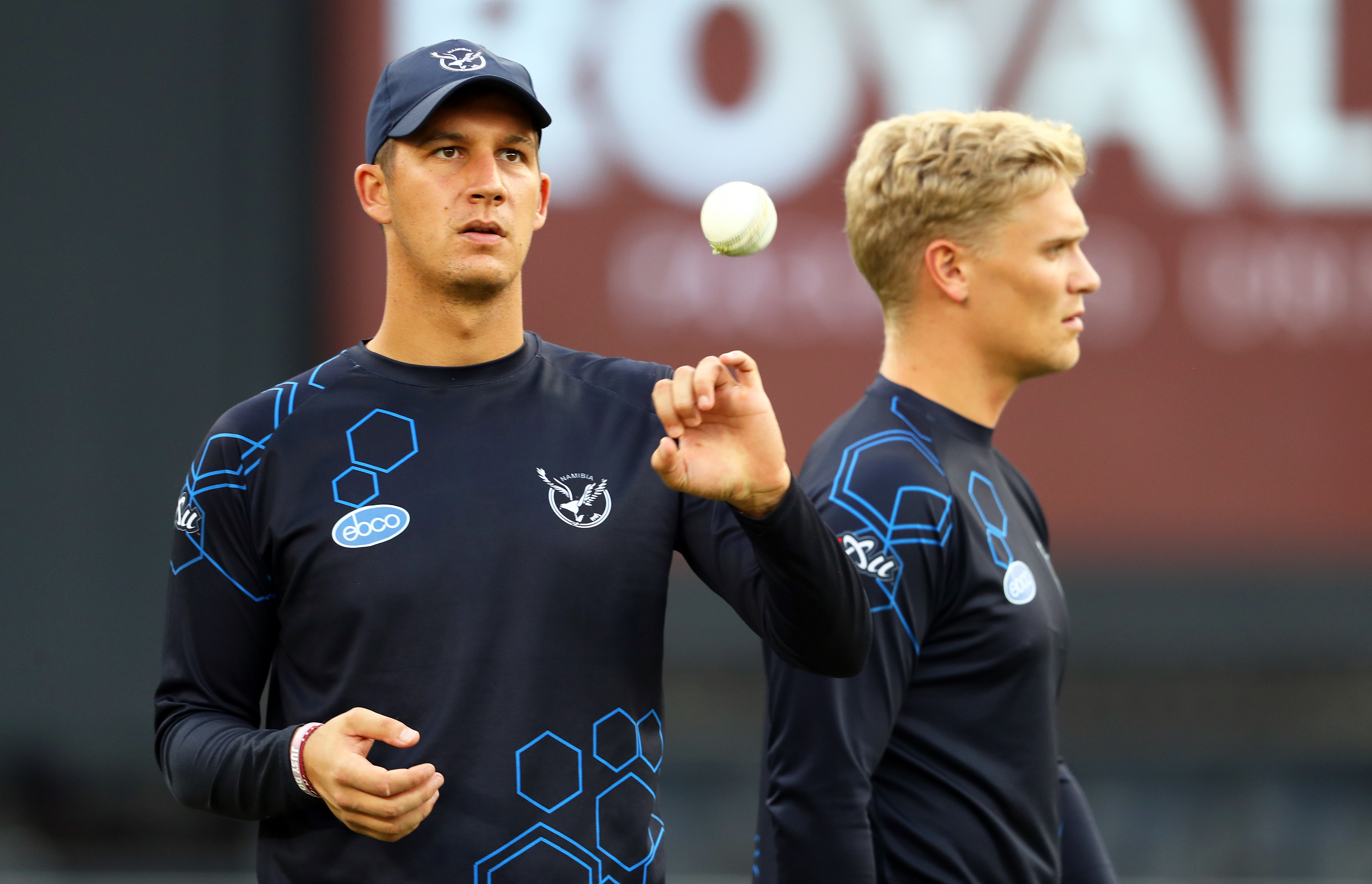 But we know with David Wiese, Ben Shikongo, Karl Birkenstock, we do have right-handed options and quite a few spinning options. It’s a nice mixed bag and depending on the conditions we will apply them as needed.

CDC: Namibia made it to the Super 12s last year and also beat Scotland at that stage. Do you think that the expectations from the team have gone up going into this edition?

AM: We had Sri Lanka, Ireland and Netherlands in our group [last World Cup]. We were definitely the underdogs. To be brutally honest about it, we thought we were going to go home early. But there’s also a lot of desire in the side. On those hot days in Abu Dhabi, we wanted it more than the other teams. This year we’ll play with a bit more belief. We’ve played against the Netherlands in the past and we’ve done well against the UAE. We’ve got the experience now when we play against Sri Lanka [in the first game]. We know what we’re up against.

They’ll probably be a tough but to crack for us, but that’s okay. That’s a fantastic opportunity for us to play against the best in the world. We believe we are good enough to beat the Netherlands and UAE on the day.

CDC: How do you think the team is shaping up for the T20 World Cup?

AM: We need to improve in certain areas. For us the biggest thing is to get most of the guys in form. I’m a firm believer in a competition like this you need at least seven or eight members of your squad in-form. On his day, one guy can win you a game but to play consistently over a long period in a tournament like this you need a few performances from a few guys. Leading up to the tournament we played in Papua New Guinea, the format was 50 over cricket, but at least a few guys got some runs there. 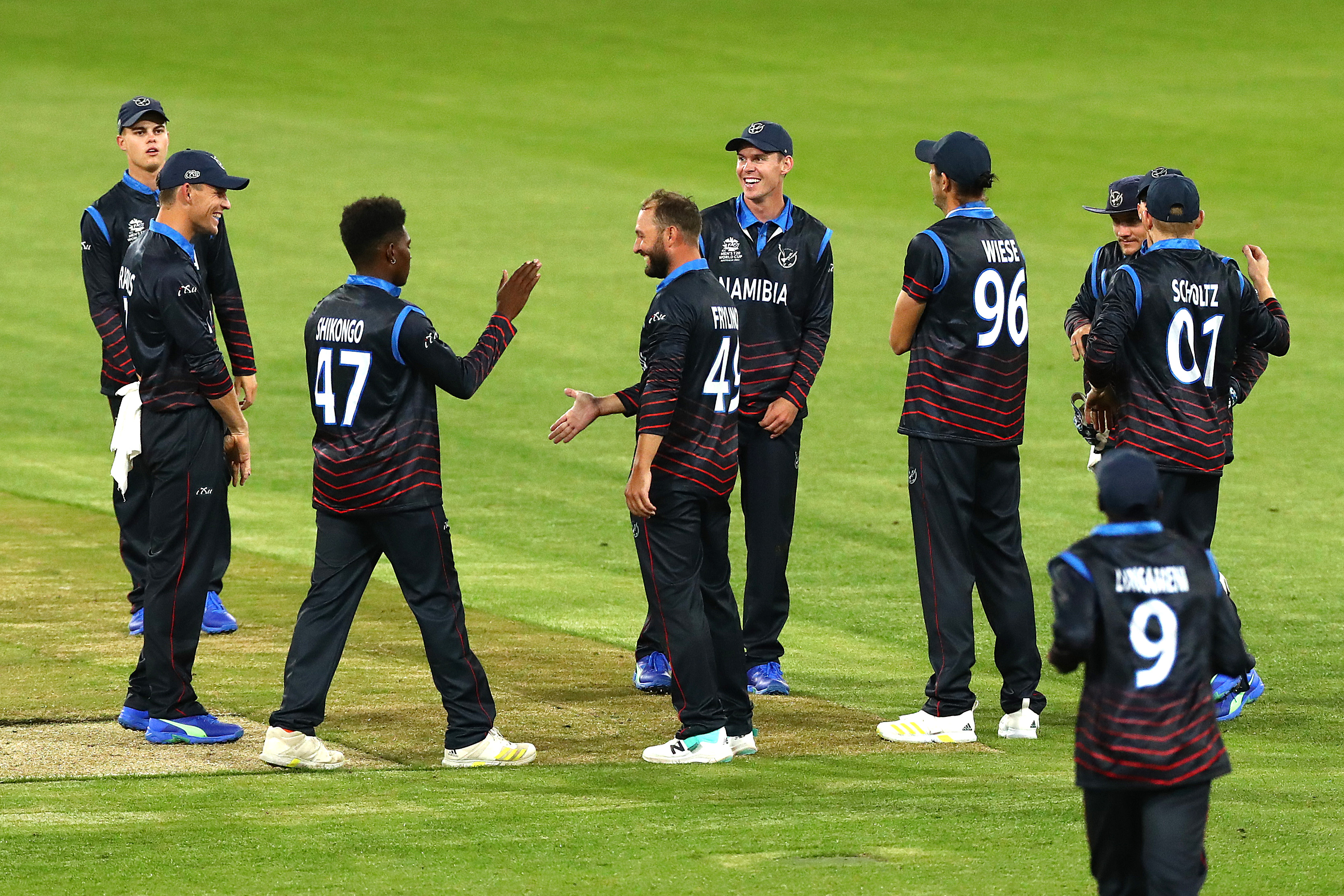 We played a warm-up game against Scotland in a place just outside Melbourne. Since then it has started raining. Luckily we’ve had some opportunity to go to the indoor facility and do some maintenance work in the gym facility we have here. Then when we leave Sunday [October 9] we have two warm-up games against Zimbabwe which is a very strong team and also Ireland. I still believe there’s enough time to get the guys ready.

UPDATE: Namibia beat Ireland by 11 runs in the first warm-up game at MCG, successfully defending 138, the highlight of which was fast bowler Ben Shikongo picking up three wickets in four balls. The second game against Zimbabwe at the Junction Oval was washed out without toss.

CDC: Finally, from me, you will be Stephen Fleming's assistant coach at the Joburg Super Kings in the SA20. You previously played under him for CSK. How excited are you to be reunited with Fleming and the franchise you represented for many years here at the IPL?

AM: I’m really excited. It’s going to be amazing, not only to be a part of it but also for Cricket in South Africa. It’s something that the country really needed. Looks like the structures, the owners and the franchise is going to be around for more than 10 years. I’m very excited to be involved with the CSK franchise, learning from Flem. He has been one of the best T20 coaches over the last decade. It’s a great time for me to learn from him and in my own way give some advice and try to help the players to be the best they can be.