All three results possible in a must-win game for India

All three results possible in a must-win game for India

Before the first T20I in Delhi on Sunday, twice, the Bangladesh team had been on the brink of a victory against India. Once, an instinct to finish the game with a flourish denied them a victory and later a rampaging opposition batsman stole victory from the jaws of defeat.

‘Cricket is a great leveller’ is among the most overused phrase in the game. For somebody who has followed the budding rivalry between the two neighbouring sides, the events on Sunday do justify the saying. Coincidentally, it was Mushfiqur Rahim and Mahmudullah on the crease in the game in 2016 when Bangladesh needed 11 off the last over. With the game in the bag after hitting nine runs of the first three balls, an ill-fated rush of blood from the two batsmen resulted in one of the sourest defeats in their cricketing history. In the first T20I however, the same duo displayed no signs of nerves as they chased 22 of the last two overs with three balls to spare, applying a healing touch to the old wound.

As the two teams gear up for the second T20I, all eyes will be up towards the heaven as an extremely severe cyclonic storm MAHA is expected to result in heavy rainfall on the day of the match.

Bangladesh dominated India during the majority of the first T20I. While their seamers showed exceptional skills by using their slower ones to good effect on a slow wicket, their young spinners were tactful enough to devoid the Indian hitters from unleashing their range of strokes.

There were numerous examples of Bangladesh being better equipped with their plans than India. The most unexpected was deciding to move on from their bread and butter and not play a left-arm spinner for the first time in the last four years. Later they deployed their bowling resources by using as many as eight bowling options (deploying as many as six one-over spells and only two-three overs spells) to avoid the batsmen getting a grip on a particular bowler. India, on the other hand, bowled only four one-over spells and had four instances where a bowler bowled a third over on the trot. These overs resulted in 12, 13, 9 and 18 runs respectively without a single wicket.

Coming to batting approach, Bangladesh outplayed India during the powerplay itself when they added 45 runs in the first six overs as compared to India’s 35. The issue of India being overcautious while batting first in T20Is is not a one-off scenario. Since 2018, India’s approach while batting first in T20Is follows their ODI model of keeping wickets in hand for a final flourish. This approach, however, has not reaped desired rewards as India has lost seven out of the 14 T20Is they have batted first in since 2018. 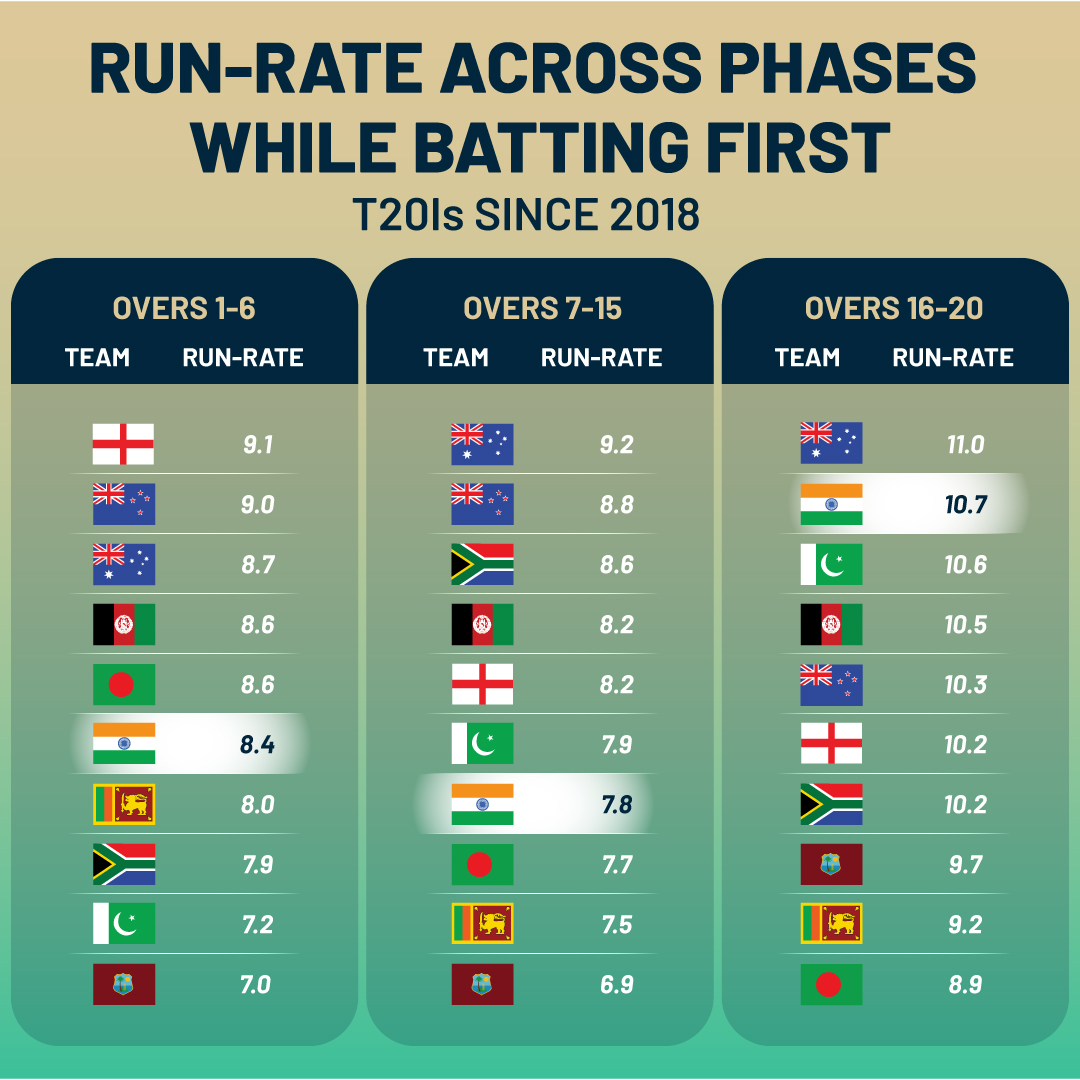 A restrained approach at the beginning not only arrests the momentum that can be asserted during the fielding restrictions, but the wicket preserving mindset of the top-order also prevents the team from getting a move on in the middle overs. Aiming for the World Cup, India needs to accept the flaw and aim to push their run-rate in the first 15 overs comparable to the top-3 teams to cater any chances of setting up a challenging first innings total.

During the first T20I, after getting their eyes in, while the Bangladesh batsmen were brave enough to unleash sweeps and reverse sweeps to adhere to the asking rate, the Indian batsmen in Shikhar Dhawan and Rishabh Pant - clearly checking his strokes due to the rising pressure on him - were unambitious and restricted themselves to play risky free, orthodox cricket.

The only breath of fresh air from the conventional approach of our top-order was the way Shreyas Iyer expressed his intentions from ball one. His cameo of a 13 ball 22 infused some fuel in the innings that seemed to go nowhere till the late flourish of Krunal Pandya and Washington Sundar who added 30 in the last two overs to add some respectability to the total.

With a clear concern for the Indian team now highlighted with the inability to set target, it is imperative for some role definition for players who like to take their time. With increasing uncertainty over Pant’s batting position, it does not appear a bad option of trying him in the powerplay especially while batting first.

The bowling line-up should take care of itself once the specialists in Jasprit Bumrah and Bhuvneshwar Kumar are back. Even the first T20I could have ended differently if not for a rare lapse in the field towards the end by Krunal Pandya.

While it is unlikely to see any rejig in the Indian line-up just after one upset, it is certain that the focus will shift from any experimentation insight for the World Cup to ensuring a series-levelling victory.

Sports often throw up with scenarios when a team, missing its key players identifying a way to motivate themselves and perform as a collective unit, the recent one in Liverpool getting better of Barcelona in the Champion’s League semi-finals while missing their key players in Mohamed Salah and Roberto Firmino. After finding themselves in a similar situation, the Bangladesh team handled the nerves better to find themselves one step away from achieving the biggest feat in their cricketing history.