An analysis of how IPL has evolved over the years 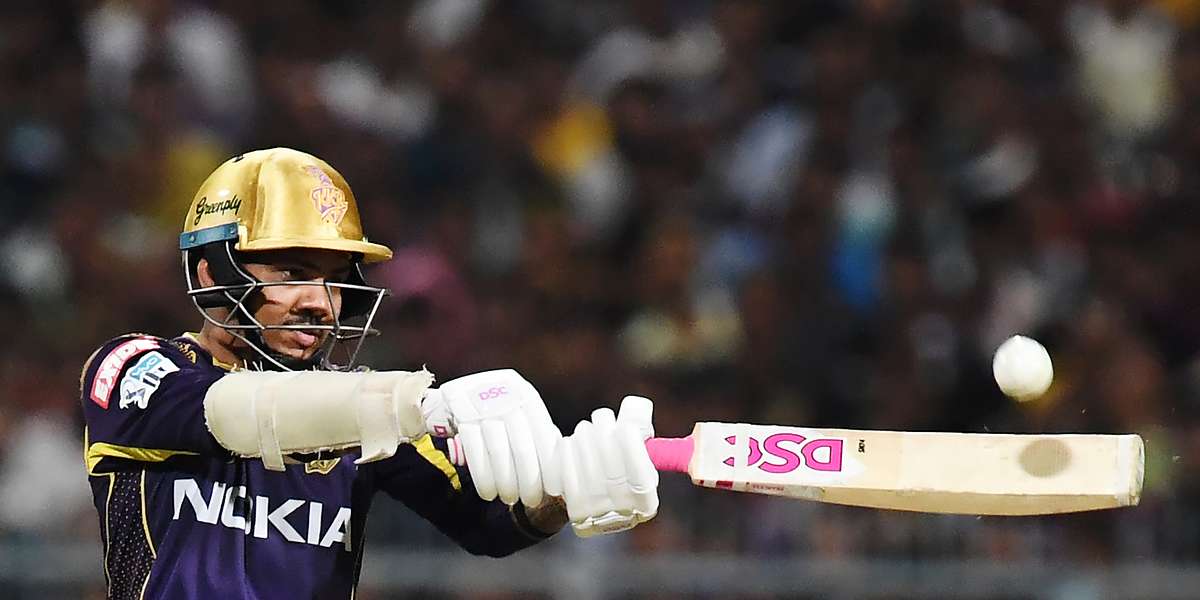 An analysis of how IPL has evolved over the years

A look at how toss results, scoring rates and the perception of spinners has changed over time

Take any team sport in the world and you will find that the pattern of play constantly changes. In a younger sport (or in this case, a young format in a sport), change is likely to happen at a quicker rate. T20 cricket has been around for less than two decades now and there have been 12 seasons of the IPL so far. And it’s not just teams, players, sponsors etc. that have changed over those 12 years. 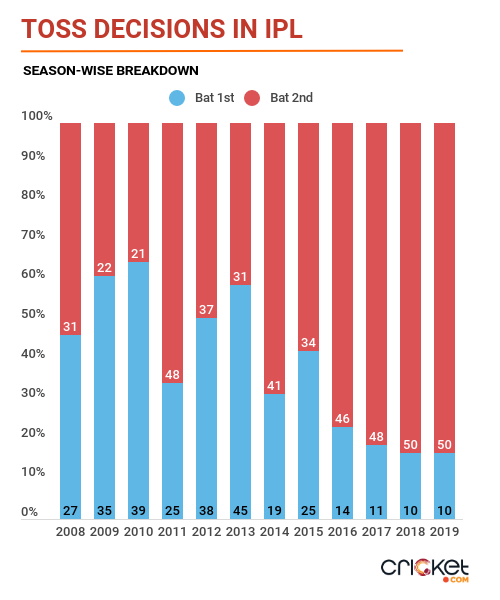 Until the 2015 season, teams were not that averse to batting first. So, what changed?

An important point to note here is that results in 2016 might have been so favourable to teams batting second because there were no matches held at the MA Chidambaram Stadium in Chennai. Among all stadiums to have hosted at least 20 matches in the IPL, only in Chennai have there been more wins for the team batting first (35) than second (22). 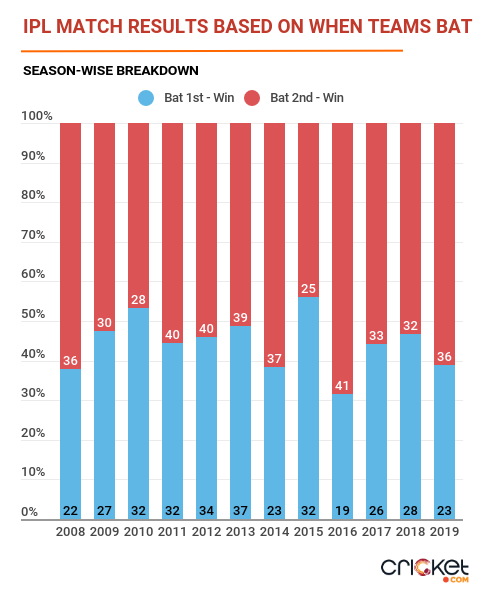 Now, you might have another question. Are teams justified in wanting to bat second in the IPL?

Well, you could say that despite 2016 being an extraordinary case with such a huge percentage of teams batting second winning matches, data suggests that teams are quite justified in wanting to bowl first. In 12 seasons of the IPL, only in two years (2010 and 2015) have teams batting first won more matches than those chasing a target.

In 2015, when the percentage of wins for teams batting second was at its lowest (43.9), once again the MA Chidambaram Stadium played a big part with teams batting first winning six of the seven matches at the ground. Hence, pitch and conditions still play a big part in decision-making at the toss, but most times than not, data indicates that you are better off bowling first in the IPL.

The rise in scoring rates

Scoring rates have definitely been on the higher side in recent years. While in the first year, teams were scoring at a run rate of 8.31, it dropped to 7.48 in 2009. This could be because the second season of the tournament was played in South Africa where a lot of Indian domestic batsmen might not have played a lot of cricket before.

In 2010, with the IPL back in India, the run rate jumped back up to above eight but in the three years that followed, it went back to below eight. This was despite the IPL being hosted in India across all three years during this period.

While 2016 had an identical run rate as the first season, the last three years have seen scoring rates at its highest. In fact, in 2019, while the run-rate was at 8.41, the batting average across the tournament was 28.5 which is the highest in 12 seasons of the IPL. Hence, you could say that compared to 7-10 years ago, batsmen have been faring better in recent seasons. 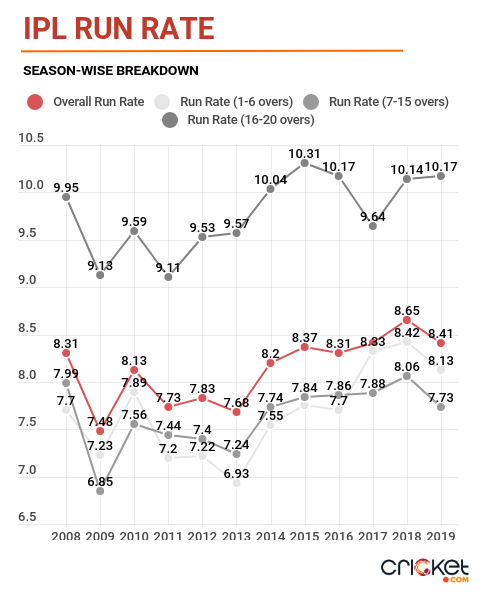 If you’re thinking about what has led to increased run rates in the IPL, one of the factors you can pinpoint to is the approach of teams at the start of an innings. Until IPL 2016, in no IPL season was the average run rate between overs 1-6 above eight. The highest during the period was 7.89 in 2010. That has changed a great deal in the last three seasons with the average run rate of each season above eight during overs 1-6.

Even boundaries have been scored more frequently during the first six overs in recent seasons. Before 2017, the best balls per boundaries rate during the Powerplay was seen in 2008 (5). In the last three years, this rate has been 4.8, 4.6 and 4.8 respectively.

Interestingly, these improvements have coincided with Kolkata Knight Riders’ strategy of using Sunil Narine as an opener. The Kolkata-based franchise started using Narine as a pinch-hitter at the top of the order in 2017 and the Trinidadian has a strike-rate of 183.9 as an opening batsman in the IPL.

This is clearly a sign that teams are willing to show greater intent at the start of an innings these days. And despite a more aggressive approach, batting averages haven’t suffered. The best runs per wicket ratio between overs 1-6 in IPL history came in 2019 (38) which was better than the previous best which was a set a year earlier by three runs per wicket. 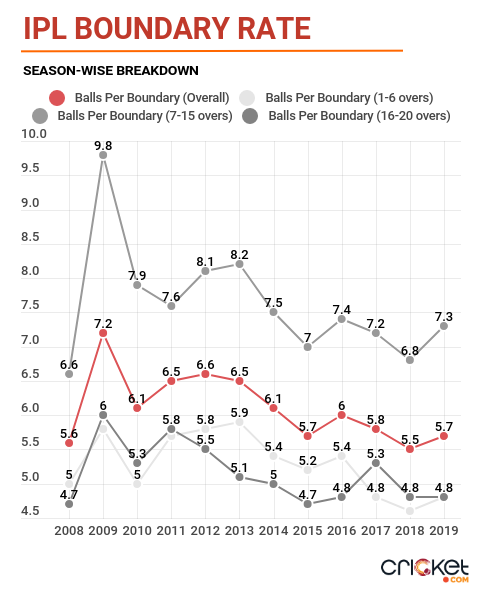 When it comes to the middle overs (7-15), not much has changed over the years. The lowest scoring rate during this period of the innings was in 2009 (6.85 runs per over) and, as mentioned earlier, the venue being South Africa played a role in this.

Regarding the death overs (16-20), we have seen a change since the start of 2014. Before IPL 2014, never was the overall run-rate during the back end of the innings above 10. Since then, it has been 10+ in five out of the six seasons played.

On the whole, it’s safe to say that batting numbers have improved over the years in the IPL. And ideally, we should see even more aggressive batting in the first six overs henceforth. After all, in a format where every over makes up for 5% of the innings, you wouldn’t want to use up much time getting your eye in.

How the perception of spinners has changed

When T20 cricket was in its infant stages, there was a school of thought that went around that the format wasn’t suited for spin bowling. And that thought was seen in practice in the first season of the IPL where pacers were responsible for over 3/4th of the deliveries bowled.

It didn’t take long for teams to realise that spinners were far from being just punching bags in the format. Since 2009, apart from the one odd year in 2013, spinners have bowled more than 30% of deliveries and taken more than 30% of wickets in an all IPL seasons. In fact, 2019 saw the highest percentage of deliveries bowled (41.9) and wickets taken (41.2) by spin bowlers in any IPL season. 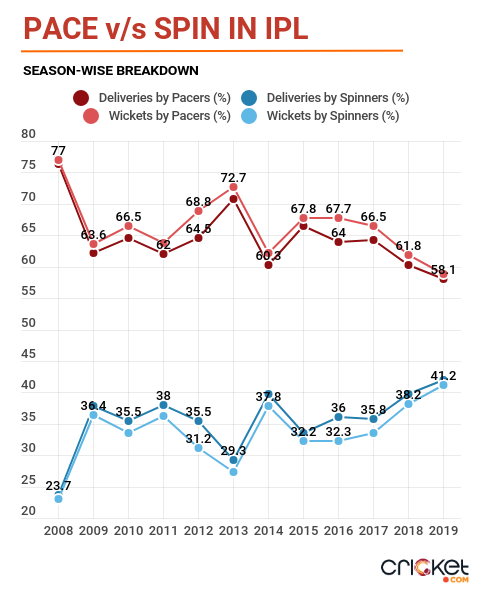 You get an even better idea of how much teams started trusting their spinners after the first season when you go through data of the first six overs. When the fielding restrictions were on, in the inaugural season of the IPL, slower bowlers were barely trusted and were given less than 5% of the overs during this period of the innings.

That number gradually increased over the next three years, with veteran leg-spinner Anil Kumble dismissing Adam Gilchrist in the first over of the 2009 IPL final during this time. While Kumble’s Royal Challengers Bangalore lost the game to Gilchrist’s Deccan Chargers, India's spin great had made a telling impact on how spinners can do the business during the Powerplay in a T20 innings.

2019 was the best year for spinners when it came to bowling between overs 1-6. While they accounted for 25.3% of the deliveries bowled during this period of an innings, they took 34.2% of the wickets to fall. They also had a better economy rate and took wickets more regularly than pacers did at the start of the innings.

Was 2019 an anomaly or will spinners continue to be more successful than pacers during the first six overs in the IPL? Only time will tell. 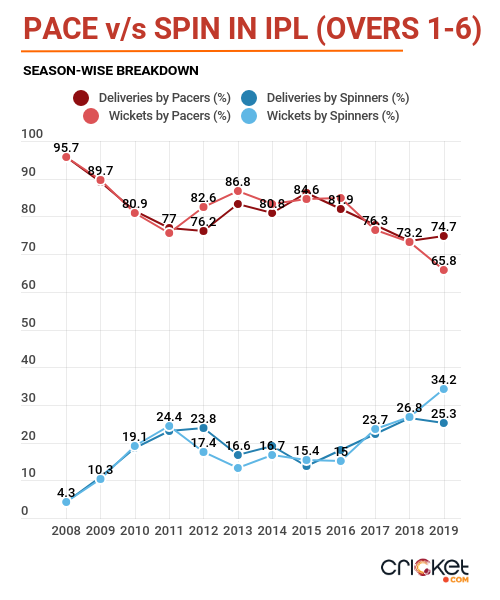 You can be assured that some of these patterns are likely to change again in the near future. After all, how tedious would sport be if matches over different seasons followed a monotonous pattern? While we could see more pinch-hitters à la Narine opening the innings, it remains to be seen if batting first will ever become fashionable again in the IPL.