And the records come tumbling down

And the records come tumbling down

The feeling after breaking a record is always sweet. Some sort of a record is broken virtually every day across all sports. Some make it to the headlines, some occupy a single line at the corner of a column.

But when a milestone is achieved in a global event, like the recently concluded 2019 World Cup, the whole world stands up and takes notice. Here are five World Cup records that were shattered in the 12th edition of the Cricket World Cup held in England:

Back in 2011, Rohit had missed the bus to India’s World Cup winning squad. That was a big setback for Rohit, the man who was seen as the future of Indian batting after the debacle in 2007.

Playing the 2019 World Cup as India’s second best white-ball batsman, he wanted to make it count and made it evident right from the first game. An exuberant stroke player, Rohit curbed his natural instincts on a tricky pitch in Southampton against a potent Proteas fast bowling attack. He saw the team through in a tense run-chase of 227 by carrying his bat through, scoring 122.

Rohit had set the tone for rest of the tournament and he did it the hard way. Now was the time to reap benefits. He followed it up with 57 in next game against Australia, scored another ton, against arch-rivals Pakistan (140) ripping apart the opposition attack. Following a blip against Afghanistan and West Indies, Rohit’s scores read 102, 104 and 103. Some of his hundreds were free-flowing, some demanded application on the crease and the Mumbaikar batted like a man on the mission. 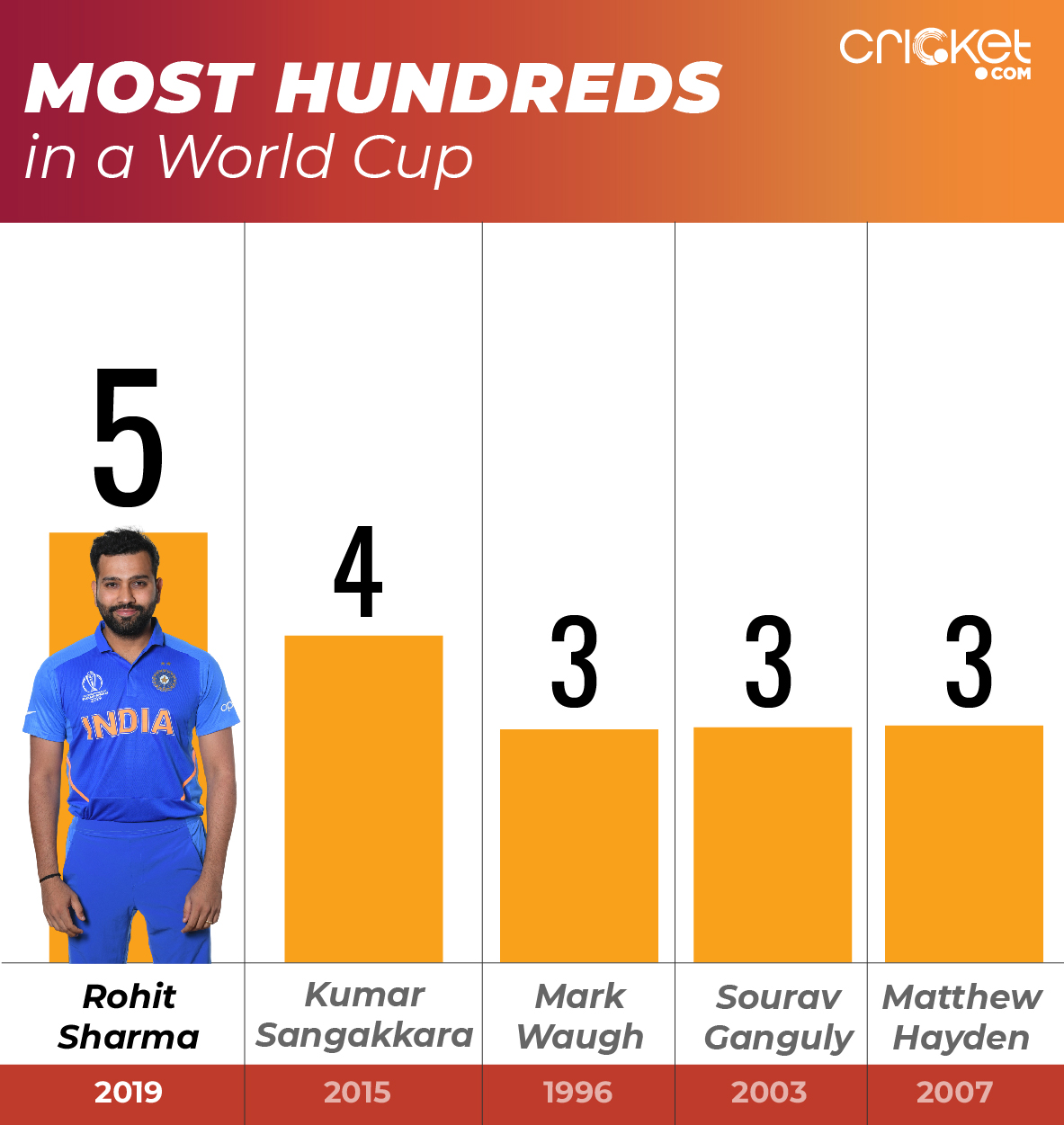 Kumar Sangakkara notched up a record four hundreds in the 2015 World Cup. Rohit’s last hundred, against Sri Lanka, took him past Sangakkara’s tally of hundreds. At one stage, he was also on the verge of breaking Sachin Tendulkar’s record of most runs in a World Cup edition, 673 in 2003, but one run in the semifinal and India’s ouster from the tournament saw Rohit 25 runs short.

Mitchell Starc had a dream run in his debut World Cup in 2015 during which he won the man-of-the-tournament award. In a victorious campaign for Australia, Starc took 22 wickets in eight games.

Playing in his second World Cup in 2019, Starc showed he was not a one World Cup-wonder and turned up with another stupendous effort. Playing two more games, as compared to 2015 thanks to change in format, the left-arm seamer extended his wickets tally to 27 wickets, breaking Glenn McGrath’s record for most wickets in a World Cup edition.

McGrath snapped 26 wickets in the 2007 World Cup playing a pivotal role in Australia title defence ending his career as a World Champion. McGrath’s tally, however, came in 11 games but at a superior bowling average and strike-rate to that of Starc. 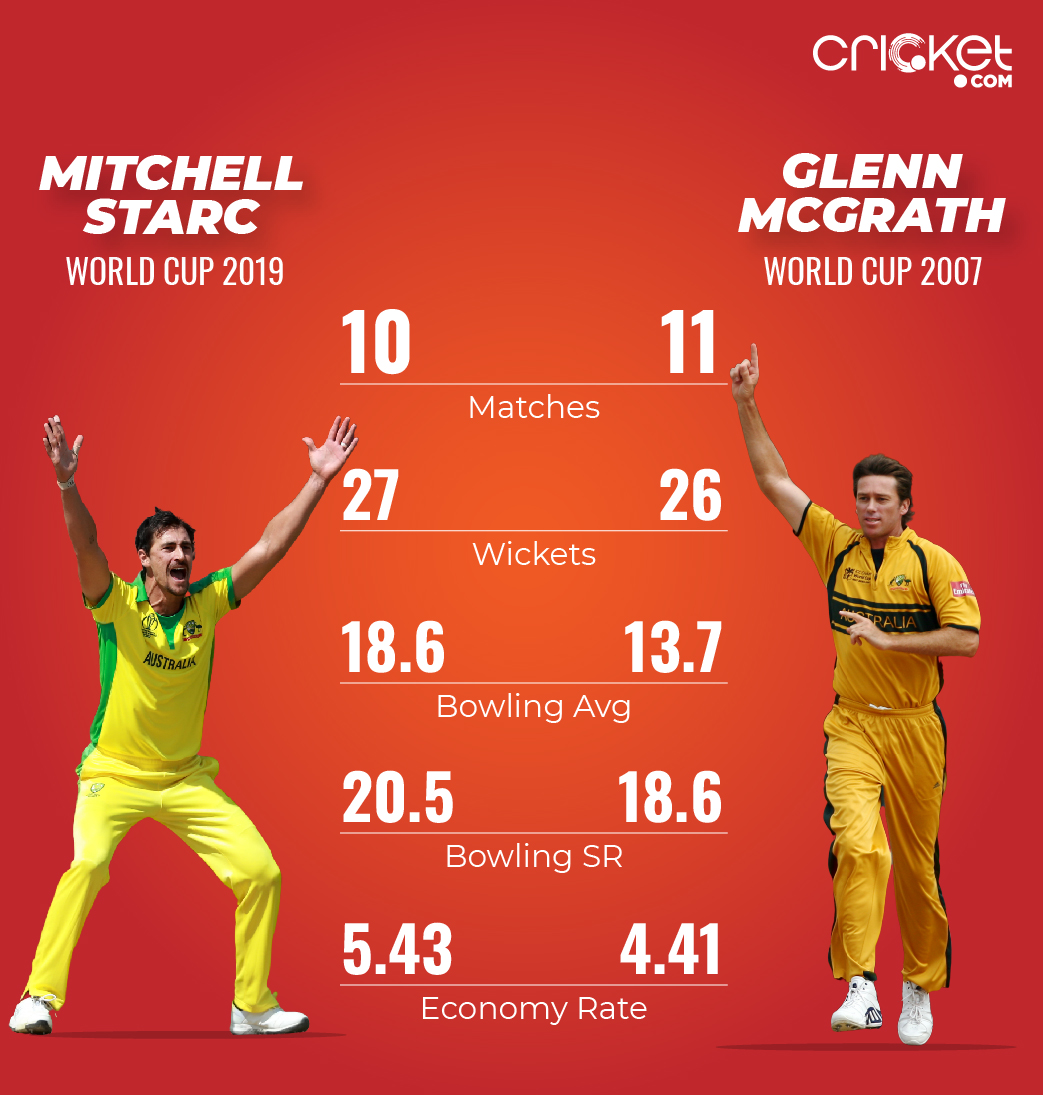 Starc’s best World Cup moments from this edition included his five-fors against West Indies and New Zealand and an astonishing four for 43 against England during which he knocked over Ben Stokes with a peerless yorker that can arguably be termed the ‘Ball of the Tournament’.

An ice cool head and an unrivalled penchant to resist pressure, Kane Williamson rose above any other captain in terms of both performance and on-field tactics. Batting at three, mostly donning the disaster-management role, the Blackcaps skipper scored 28.5 percent of his team’s runs in the World Cup.

The batting units of India and Australia were considered top-heavy given the imperious form of their openers and in India’s case, Virat Kohli at three. New Zealand was top-heavy only because of Williamson’s presence at three. The right-hander scored tough runs coming out to bat within the first 10 overs in every game barring New Zealand’s tournament opener against Sri Lanka, which they won by 10 wickets.

He scored two hundreds, each of them winning games for New Zealand - once chasing 241 on a tricky Edgbaston wicket versus South Africa and the other when New Zealand were two down in the first over against West Indies.

Williamson accumulated 578 runs in the tournament, breaking Mahela Jayawardene’s record of most runs by a captain in a World Cup edition. The Kiwi skipper did it by playing two innings fewer than Jayawardene who amassed 548 runs in 11 innings during the 2007 edition. 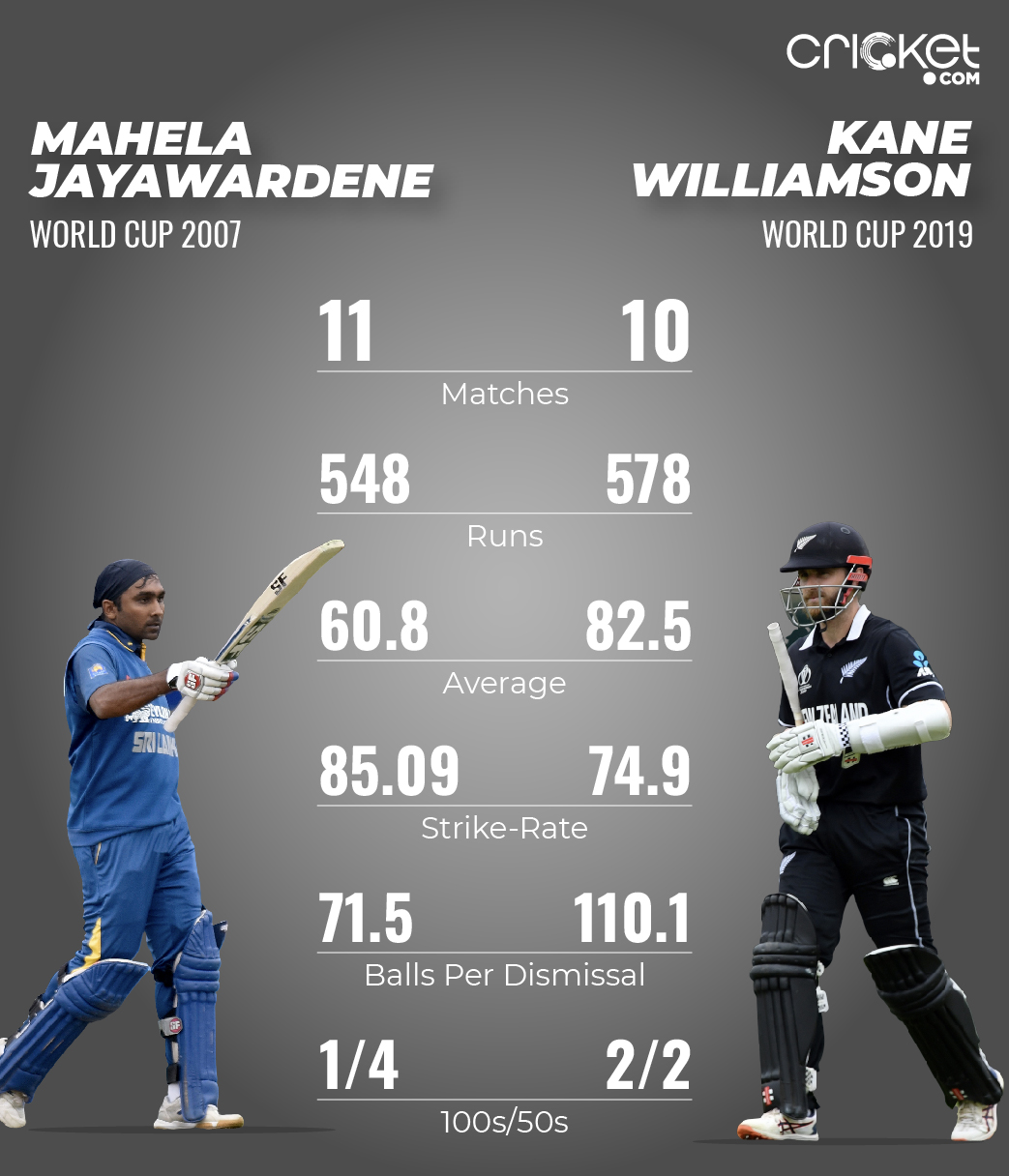 Coincidentally, both Jayawardene and Williamson’s sides lost in the final. Williamson, however, won the player-of-the-tournament award for scoring runs in high-pressure situations and leading his side flawlessly. 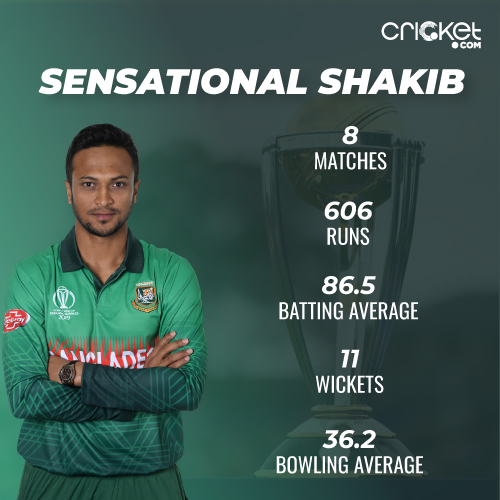 Shakib Al Hasan is arguably the first cricketing superstar produced by Bangladesh and has proved it time and time again. As a result of his consistent performances, in 2015, the southpaw became the only player in the history of international cricket to top the all-rounder’s rankings in all three formats of the game.

In the 2019 World Cup, he was seen at his devastating best. Batting at three, the ideal position for the best batsman of a side, Shakib led Bangladesh’s batting arsenal scoring 606 runs in the tournament. Bangladesh played eight games, Shakib scored at least a fifty in seven, notching two hundreds. He scored 75 and an unbeaten 124 in Bangladesh’s astonishing victories over South Africa and West Indies. His lowest score in the tournament was 41, which speaks volumes of his performances with the bat.

He complemented his 606 runs with 11 wickets which included a five-wicket haul against Afghanistan. The closest an all-rounder has come to Shakib’s World Cup performance statistically was Yuvraj Singh in 2011 when he scored 362 runs and took 15 wickets.

Yuvraj won the man-of-the-tournament award for his stellar performance. Shakib was a leading contender for the same in the 2019 edition but Bangladesh’s failings while attempting to make a mark in the competition made the jury look elsewhere.

Shakib’s gargantuan performance on the biggest stage of ODI cricket has ensured his stature as Bangladesh’s greatest cricketer has grown manifold.

#5 Eoin Morgan, too hot to handle 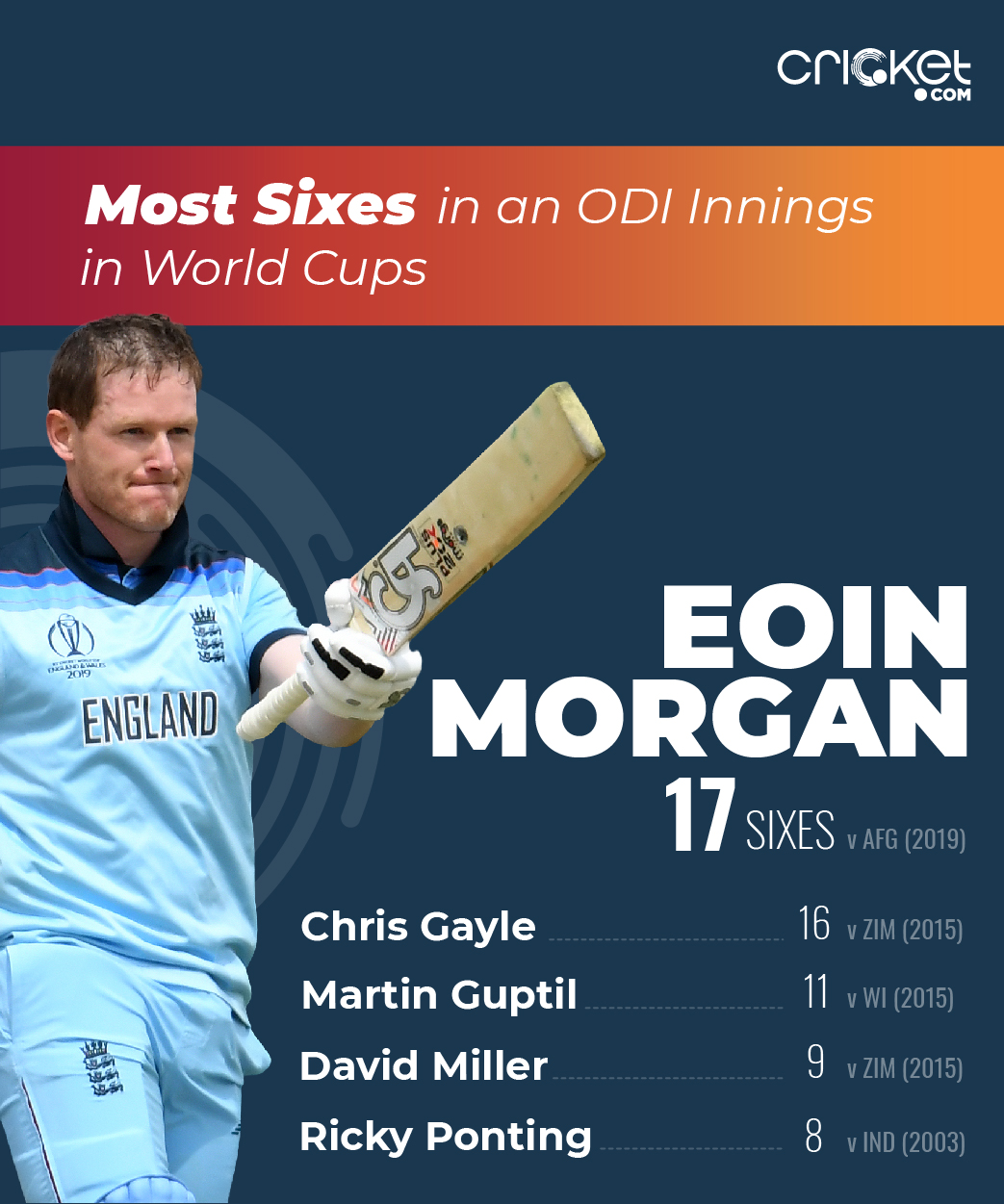 There are certain records that stand not only as a milestone but also as a testimony to the traits of the record-holder. Brian Lara’s quadruple hundred in Test cricket, Sachin Tendulkar’s hundred hundreds are the notable few.

In the 2015 World Cup, one such achievement was recorded when Chris Gayle blazed 16 sixes en route to a punishing 215 against Zimbabwe. The ‘Six Machine’ aptly held the record for most sixes in an ODI innings in the World Cup history. Four years later in the 2019 World Cup, Eoin Morgan had other plans.

Having a quite World Cup with the bat for the initial few games, Morgan came out to bat against Afghanistan with 20 overs to go and England having eight wickets in hand. In an attempt to follow the age-old dogma in ODI cricket of doubling the side’s score after the 30th over mark, Morgan did not take long before he started to swing his bat and had struck two maximums within the first 10 balls he faced.

He became more brutal once he was dropped by Dawlat Zadran on the boundary line having scored 28 off 25 balls. From that point on, everything that was hit by him in the air seemed destined to go over the boundary. In a swashbuckling innings of 148 off 71 balls, Morgan struck 17 sixes breaking Chris Gayle’s record for most sixes in a World Cup innings and also the collective record held by Rohit, AB de Villiers, and Gayle for most sixes in any ODI innings, 16 each.

NEWS
Rohit, Bumrah only Indians in Williamson-led World Cup XI
World Cup winners England have as many as four players in the team.