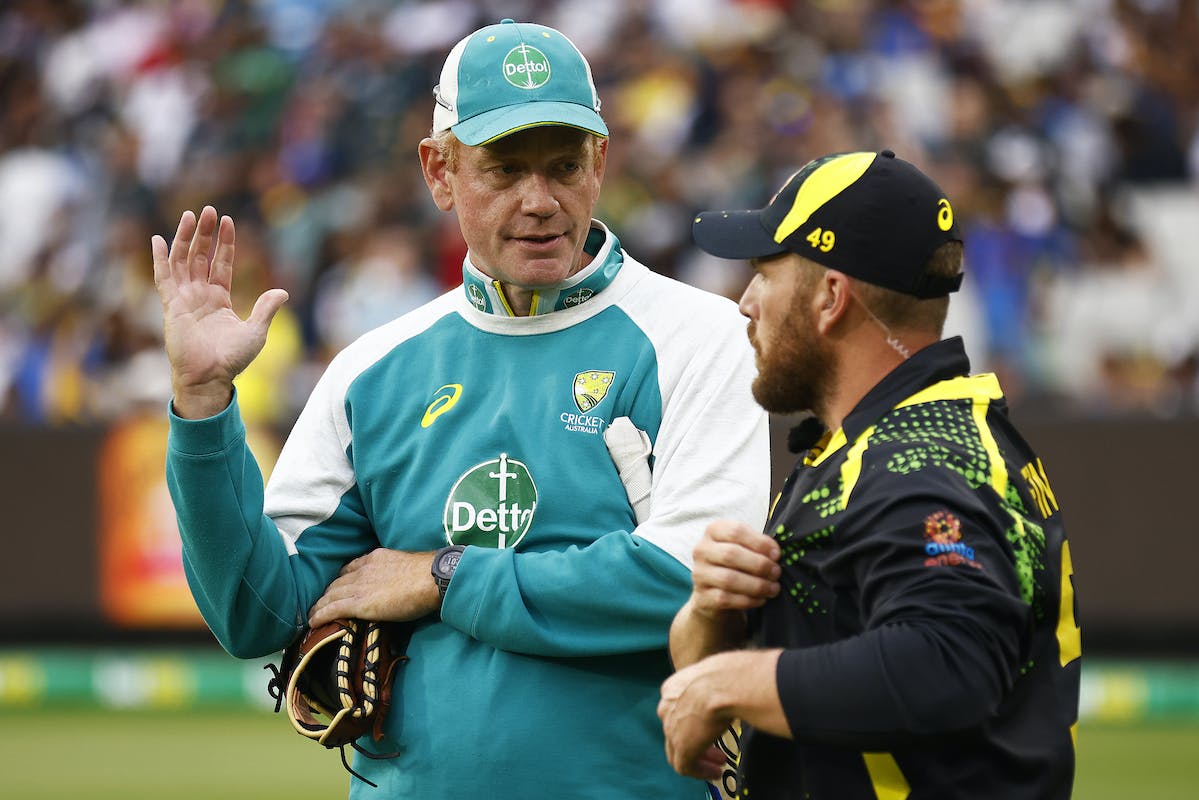 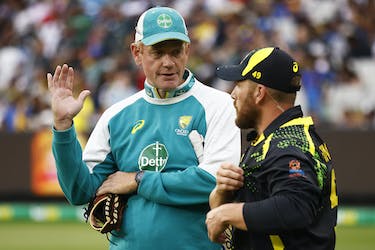 Australia head coach Andrew McDonald has backed skipper Aaron Finch to come good in the remainder of the tournament. Finch has been struggling for form of late and his scratchy 31 not out of 42 deliveries in Australia's win over Sri Lanka has certainly not helped his cause.

Australia's crucial tie against England was washed out due to persistent rains in Melbourne, which makes their games against Ireland (Oct 31) and Afghanistan (Nov 4) extremely crucial as they look to progress to the semi-final. The defending champions have three points from as many matches so far.

"He was selected for the team, he's our captain, so I think that says everything with the way we internally view where he's at. He didn't have his greatest night the other night, and I think he's pretty much shared his views on that," McDonald said in a press conference when asked if Australia will continue to persist with Finch.

"That can happen in T20, but we know equally it can shift quickly the other way as well. You're a couple of shots away from finding your rhythm, finding your tempo, and unfortunately, he wasn't able to do that the other night.

"The beauty of the team is that, if one is not functioning to the full capacity, you have a few teammates around, and Marcus Stoinis was absolutely brilliant.

"It's really how the team functions. He's really important to us in terms of connecting the strategy of what we want to do, and his captaincy record in big tournaments has been pretty good. So we feel as though that captaincy is a real benefit for us. So we're not prepared to shift that at this stage.

"We feel as though that he will come good, and when he does come good, I think that that then probably puts the finishing touches on us being the team that we want to be, no doubt."

Adam Zampa and Matthew Wade were recently infected with Covid. McDonald said Zampa had to miss the game against Sri Lanka as it was a little more severe than Wade's symptoms, adding that the wicketkeeper would have taken part in the game against England.

"I suppose the strong point around that was that Matthew Wade was going to play tonight. So each individual is affected differently by the virus.

"Obviously, Adam Zampa wasn't quite right. We had a caution there to make sure he was ready to go for this game whereas Matthew Wade responded totally differently, less symptoms and he was ready to go tonight. Had to be isolated from the group.

"That was probably the only thing where we had to communicate separately from him, which is a little bit unique."

The former Australia all-rounder also added that the Steven Smith is often discussed in the dressing room and he will get depending on the surface and the opposition. Smith, who has scored a little over 1,000 runs in 62 T20Is has registered scores of 35, 8, 9, 17 and 7* in his last five innings.

"He gets discussed regularly. So depending on the surface, as I said, depending on the opposition. So, yeah, we've got 15 players on our squad, and it's a challenge to pick 11, it always is.

"As I said, the surface and the opposition really probably shift our thinking and get to our final decision around what that 11 looks like. So he's definitely come up in conversation."

England too are in the same predicament as Australia. They too have three points from three games, and are coming off a defeat at the hands of Ireland. England captain Jos Buttler, who was keen on putting that loss behind him quickly, has to wait until Wednesday (November 1), when his side takes on New Zealand, which is a must-win for both sides.

"This was a huge occasion and needed your full focus and attention, so you would have moved on very quickly into tonight from the disappointing defeat against Ireland," Buttler said after the England-Australia game was called-off.

"Now we have a few days. If people need to deal with it more, you can deal with that. There's excitement to get back on the field. There's a lot of everyone wants to play cricket, and talented guys on our team want to get out there and showcase the best of their abilities.

"We'll have to wait until the game now against New Zealand."

Speaking of the game against New Zealand, Buttler says each and everyone from his team need to turn up to get over the line. "For us, we knew, having lost the game against Ireland with three [matches left] -- the way the format is anyway, every game is pretty much a must win," Buttler explained.