Which are the bowling-friendly venues in the IPL? 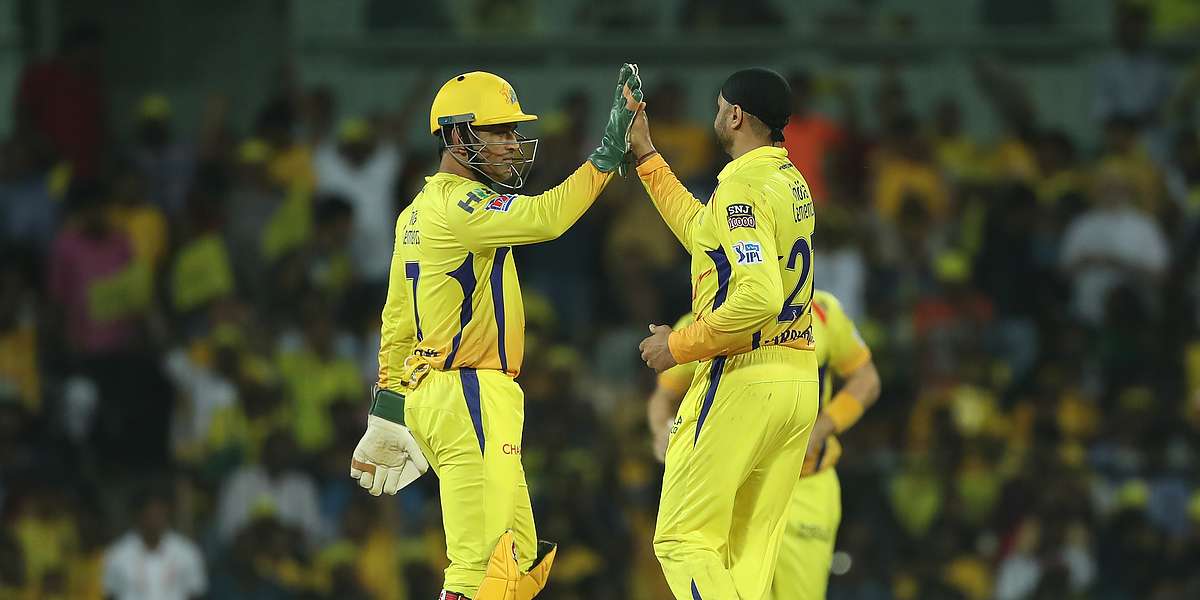 Which are the bowling-friendly venues in the IPL?

With the game increasingly tilted towards batsmen, there are still a few venues in the IPL which keep the bowlers in contention

During the ’90s or early 2000s, with no T20 cricket and two new balls rule in ODIs, run-scoring seemed a tough task. The pacers could extract reverse swing during the end phases and the softness of the ball also made it difficult to score runs. The scenario now has changed. The advent of T20 cricket has been one of the significant impulses driving the change in the limited-overs competition. Nowadays, most of the venues prepare flat wickets that can produce scores of over 180 on a regular basis in T20s. Scores in excess of 300 in ODIs are becoming routine. This change has brought in a lot of diversity among the bowlers and every now and then there is a new skill on display.

Despite the few disadvantages that the bowlers face, there are a few venues that still provide some assistance to them. In the IPL as well, venues like Chennai, Hyderabad are still bowling-friendly when compared to a few others.

Chepauk has consistently been one of the venues in which bowlers rejoice and it gets troublesome for the batsmen due to its slow nature as the game advances. Thus, the economy here is the lowest among all the venues with a minimum of 10 IPL matches since 2015. The scarcity of runs scored has a direct impact on the bowling average as well. 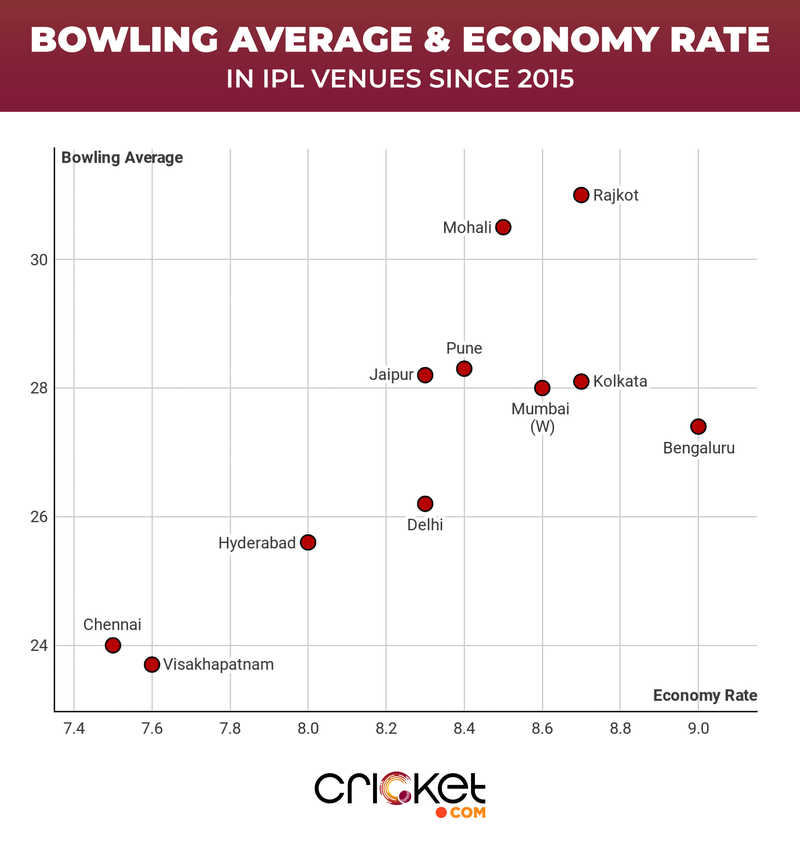 There is a particular reason why we emboss that the pitch is slow at Chepauk. When we compare the economy of the bowlers from the first 1st to the 2nd innings, there is a massive difference, the economy drops from 7.9 in the 1st innings to 7.1 in comparison to the 2nd. This is also one of the reasons why 63% of the matches have been won by the teams batting first in Chennai, which is the most among all the venues where at least 10 matches have happened since 2015 in IPL.

However, there are few venues which have seen wickets at regular intervals irrespective of the economy. For example in Bengaluru, both pacers and spinners enjoyed regular strikes. The overall bowling strike-rate here of 18.3 is the best among all the venues. The pacers’ strike-rate of 19.9 is third best while spinners’ 19.6 is the 2nd best.

When it come to a spin-friendly conditions, the first venue that pops up in our mind is Chepauk. At an economy of 6.5 for spinners, Chennai is the only venue where the spinners have conceded less than 7 runs. Likewise, which venue has favored the pacers? Though there have been a few matches played in Visakhapatnam, considerably, both pacers and spinners have had decent economy. Apart from Visakhapatnam, Hyderabad has been the best for pacers in terms of all three, economy, average and strike-rate. 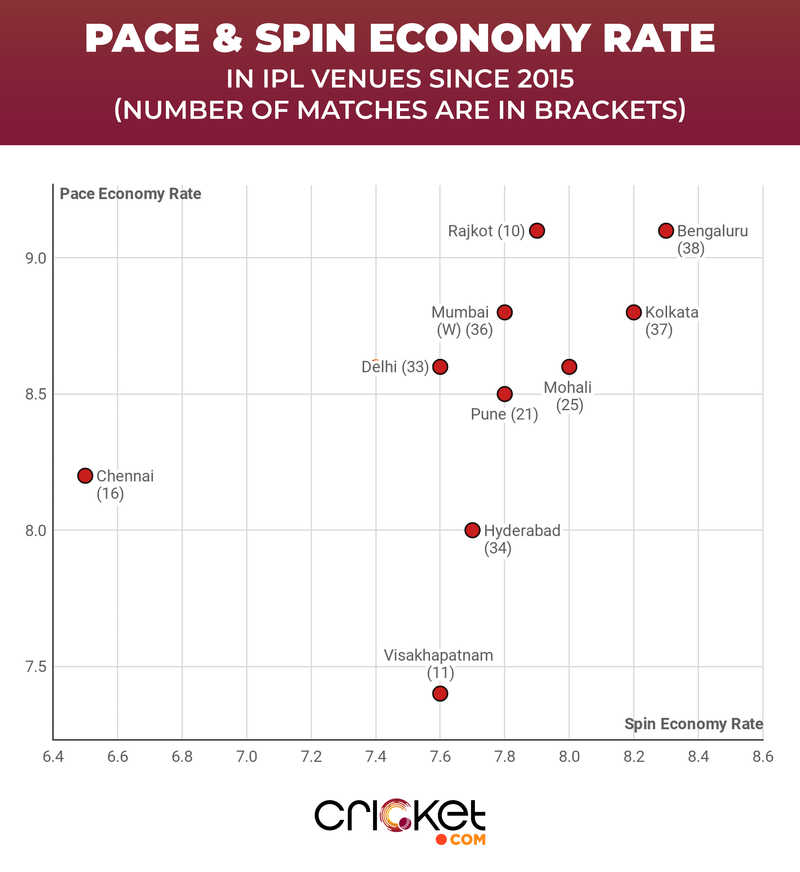 There are several factors that come into consideration when a team picks its combination of bowlers, like dew, size of the venue and etc. In venues like Wankhede, both dew and size are factors of consideration, thus, fast bowlers come into play rather than the spinners. With 67% of wickets taken by pacers, the red soil of the Wankhede has been best for them in terms of percentage of wickets taken. In any case, the home teams’ amalgam also matters, MI are such a team that is dependent on their pacers and at the other end are CSK who are dependent on their spinners and the pitch in Chennai also craves for slower bowlers. Moreover, Dhoni is a master in manipulating the game when the spinners are in command. At Chepauk, 43% of the wickets have been bagged by the spinners, which is the most among all the venues.

Few venues offer a natural advantage due to their size. In general, the venues for T20 games are comparatively small, which is why a flurry of boundaries and sixes are a common sight. However, grounds in Jaipur, Hyderabad and Mohali have bigger boundaries where the batsmen have to work hard for their runs. The non-boundary% of runs scored in Jaipur shows how batsmen have to be crafty to score runs.

In a format where a six is a frequent sight, Jaipur is one of the grounds that make the batsmen stick to the old school playbook where the batsmen have to thrive hard for their runs. Therefore, the average number of sixes hit per match is the lowest among all the venues in IPL since 2015. Due to more gaps available because of a bigger outfield, the batsmen can work the ball around for 1s and 2s on majority of occasions. Hence, the percentage of dots conceded in Jaipur is comparatively low as the batsman always rotate the strike. As a matter of fact, even Mohali is one of the bigger grounds in India and the best instance of winning a match in Mohali with strike rotation was in the super 10 stages of the 2016 T20 WC, where Dhoni and Kohli stole the match with their conversion of 1s into 2s against Australia.

As the years progressed, batting-friendly venues have become more dominant in the IPL. Henceforth, we observe a severe surge in economy rates at a few venues, especially, since the last five years. 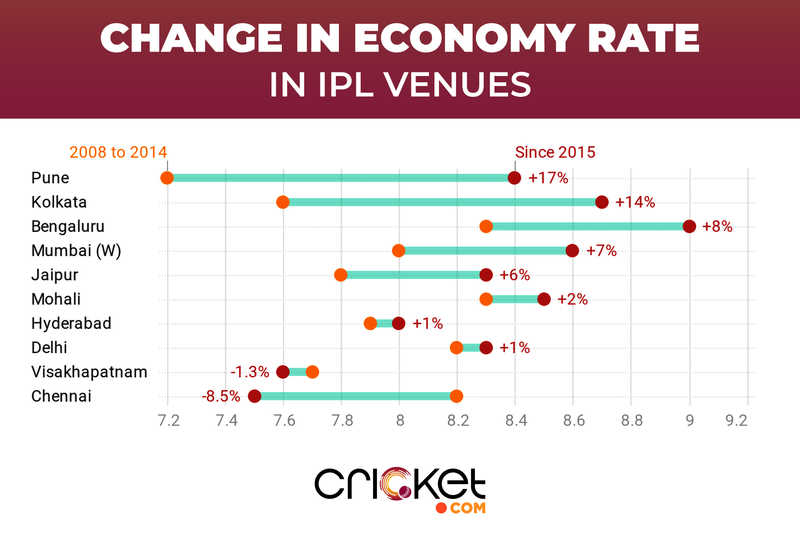 With the number of pitches increasingly favoring the batsmen, there are very few venues that still assist the bowlers. From an entertainment point of view, while a high-scoring encounter is a feast but nothing provides an adrenaline rush like a closely fought contest where quality bowling on a conducive track tests the skills of a batsman.