Arthur has done nothing for the team, must be replaced: Qadir

Arthur has done nothing for the team, must be replaced: Qadir

Spin legend Abdul Qadir doesn’t want South African Mickey Arthur to continue as Pakistan’s head coach, saying it’s time others should be given a chance to take the national team forward. Qadir said he differs with former captain Wasim Akram’s view that Arthur should be given a fresh contract by the Pakistan Cricket Board (PCB).

“I know Wasim Akram has told the Board (PCB) that they should give another contract to Arthur but to me this is like doing injustice with others. Others too need to be given a chance to take the national team forward,” Qadir said in an interview.

The former chief selector said if Akram had so much concern about Pakistan cricket than he should become the bowling coach of the national team. Akram is one of the members of the PCB’s cricket committee which will meet on August 2 to review the national team’s performance in the last three years and prepare recommendations for future.

“To me Mickey Arthur has contributed nothing to the Pakistan team. In fact, he has damaged it with his clear bias towards some players including Sohail Khan, Kamran Akmal, Umar Akmal, Ahmed Shehzad, Imran Khan who could have done a lot for the Pakistan team with their experience,” Qadir said.

“No one thought how much investment has already been made in these players and how much it would hurt Pakistan cricket by sidelining them at their peak.”

Qadir said Arthur used the excuses of fitness, discipline and attitude to keep the deserving players out. “We have spent millions of rupees on his fees and expenses and got nothing in return. He didn’t even want Wahab Riaz in the team and sidelined him for two years but was forced to eat humble pie and accept him for the World Cup at the last moment,” he said.

Qadir said he didn’t see any sense in having a head coach in the team, and instead preferred specialist coaches in batting, bowling and fielding departments. The out spoken leg-spinner, who played 67 Tests and 104 ODIs, said whatever decision the PCB takes now it must be made keeping in mind the next four years not just next year’s World T20.

Qadir backed Sarfaraz Ahmed to continue as captain particularly in the limited over formats. “I think he has done enough and shown he is a fighter to be given an extended run at the captaincy.”

Arthur, former chief selector Inzamam-ul-Haq and Sarfaraz have all been called for the cricket committee meeting to make presentations on the team’s performances in the last three years. 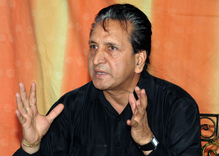