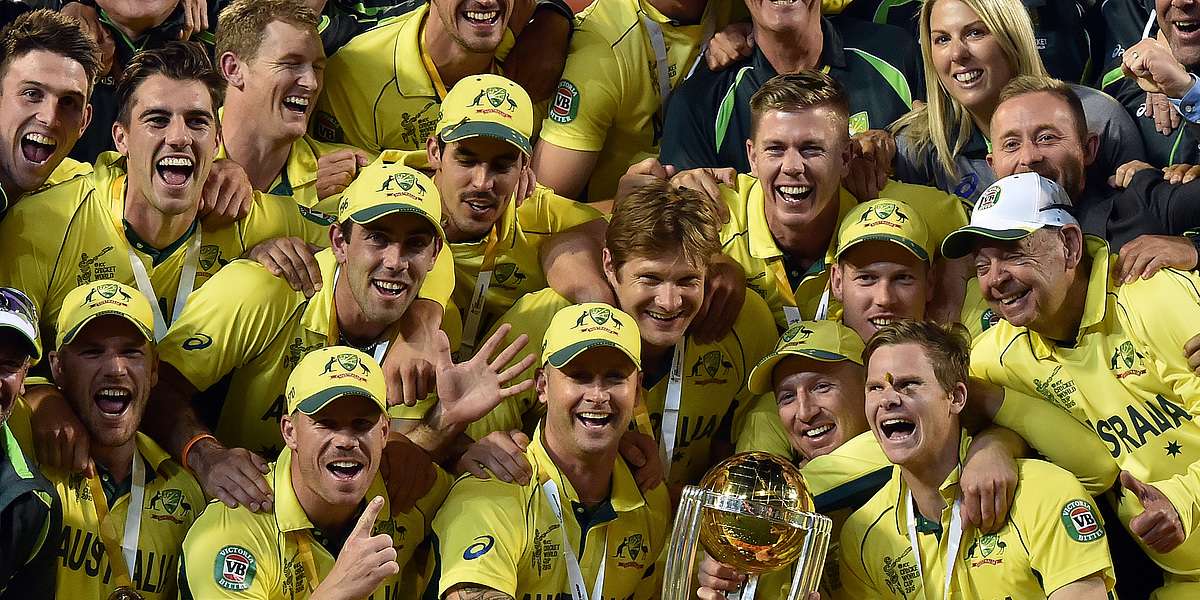 On this day, Australia added one more World Cup title into their basket. It was a fitting end to a fantastic captain’s career

The 2015 World Cup saw Australia and New Zealand playing host to the quadrennial event for the second time since 1992. The odds were stacked in Australia’s favour leading into the World Cup. They had their tails up with a win% of 69.1 in ODIs since 2013, which was the best among all the teams and they had the home advantage as well. In addition, they would also have been to give their captain Michael Clarke, who had announced that he would retire from ODIs after the World Cup, the perfect send-off.

The tournament featured 14 teams, the same number as the 2011 World Cup, giving associate and affiliate member nations a chance to participate. The format was also similar to the 2011 edition with 7 teams in two different groups. Australia were in Group A, and the defending champions India, who were on a roll and looked like one of the hot favorites were in Group B. A Super Over was kept in place only in the finals in case of a tie. 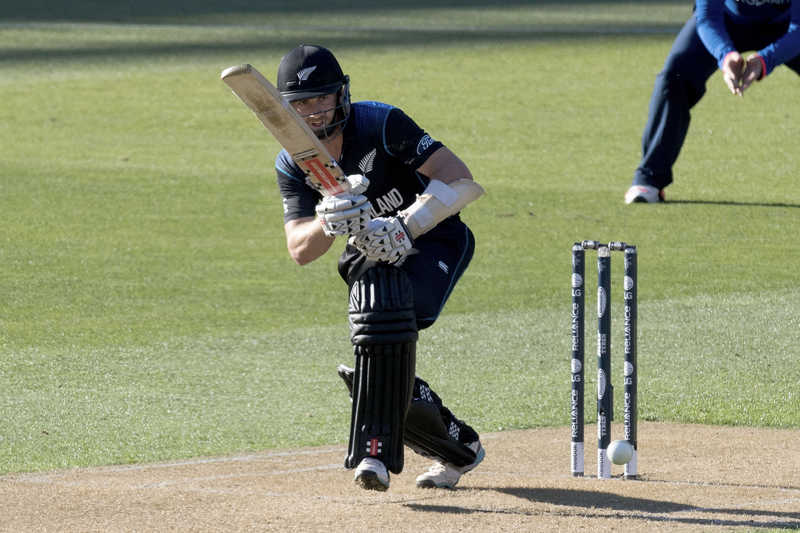 Both the hosts were in the same group and both of them were playing on the first day of the tournament. Australia were playing their arch-rivals England in the curtain-raiser. On back of a century from Aaron Finch, Australia posted a total of 342 and Mitchell Marsh’s five-fer fetched them a massive win of 111 runs. The second game against Bangladesh was abandoned without a ball being bowled.

Then came the thriller of the 2015 World Cup, a match which would probably go down as one of the all-time best. New Zealand, who had big wins in both their previous matches were hosting Australia. With hostile fast bowlers from both the sides, Auckland was in for a spicy contest. Australia got off to a decent enough start when they scored 68 runs in the first 10 overs. Just as they were looking for a big score, Vettori provided them with a breakthrough in-form of Watson in the 13th over. Then on, Australia subsided from 80 for 1 to 106 for 9 losing eight wickets for 26 runs, one of their worst collapses in ODIs. Boult was the star with a five-wicket haul and was equally supported by Southee and Vettori with two wickets.

Chasing 152, New Zealand had messed up the chase even though McCullum got off to a blazing start by scoring a 21-ball half-century before being dismissed in the 8th over. New Zealand also were heading the same way as Australia as they lost Taylor and Elliot both in successive balls, but Anderson and Williamson provided some stability with a 52-run partnership. Riding on that partnership, NZ were looking comfortable with 21 runs required, but Australian bowlers especially Starc was standing in between. Yet another collapse was triggered by the left-arm quick after Maxwell dismissed Anderson. However, the ice-cool Williamson stayed till the end and took NZ over the line with one wicket in hand.

Despite their loss, Australia were relentless. In the remaining three league matches they thrashed each of their opponents and booked a quarter-final encounter with Pakistan. The quarter-final match also turned to be a walk in the park for them as they eased past Pakistan with 6 wickets. 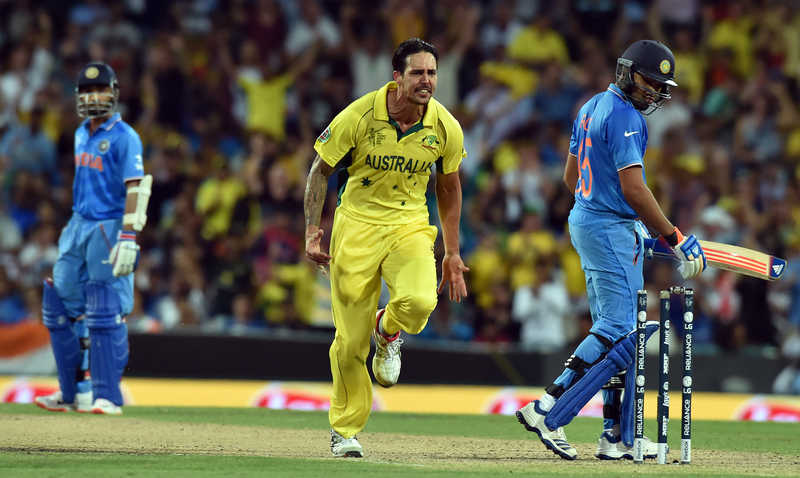 Australia batting first, thanks to a century from Steve Smith, posted a total of 328. The partnership of 182 runs for the 2nd wicket between Finch and Smith had set the foundation. After the dismissal of Smith, a small collapse was countered by Shane Watson and James Faulkner, while the finishing touch was laid by Mitchell Johnson with a quick fire 27 off 9 balls.

Never had a team chased a target of over 300 in knock-out match of a World Cup, hence India were on a backfoot before the start of the chase. Even though, Rohit and Shikhar provided a good start by piling a 76-run partnership for the opening wicket, Australia had the upper hand. Josh Hazlewood provided the breakthrough needed and later Australian quicks made inroads until Rahane and Dhoni joined hands. A 70-run partnership run partnership for the 5th wicket gave a glimmer of hope for India, but Starc ruined that as well. Dhoni, towards the end was fighting a lone battle before a brilliance from Maxwell at mid-wicket claimed the wicket as well as match. In the end Australia won the 2nd semi-final and had set up a Trans-Taman final. 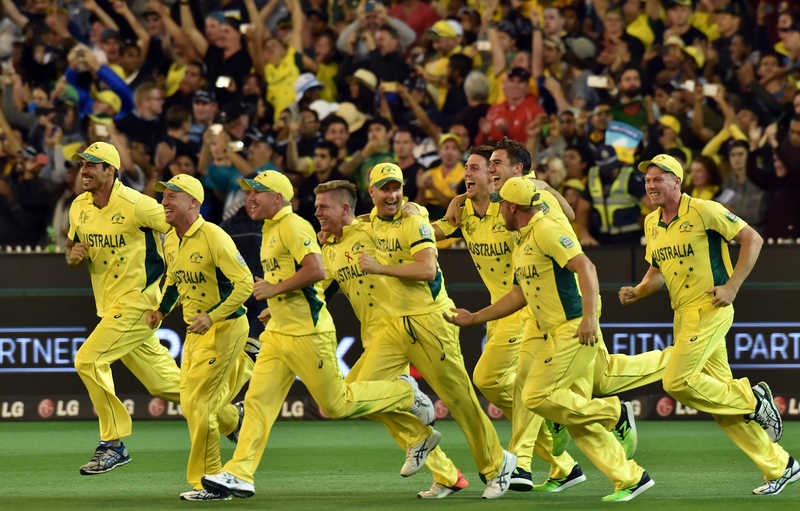 Both the teams had been sensational throughout the World Cup. New Zealand were unbeaten and Australia had lost only one match and that too against New Zealand. The way these two teams played in the league stage, a sense of excitement was in the air on how the final would pan out.

After electing to bat first, NZ were jolted by an early strike as Starc removed the dangerous McCullum in the first over the match. The top three were decimated for a score of less than 50. A 111-run partnership between Taylor and the semi-final hero, Grant Elliot, halted the collapse until Faulkner got the better of Taylor. After the fall of Taylor, Elliot was stranded at one end looking at the wickets collapsing the other side. A knock of 83 by Elliot helped New Zealand crawl to 183 which was never enough even though it was a final.

Chasing a meager total, Australia suffered an early but not an alarming set-back through Finch who was dismissed for a duck. Smith and Warner tackled the early threat and then the skipper Michael Clarke’s innings of 74 was the icing on the cake. An easy win for Australia summed up how they had dominated in this World Cup. The fast bowlers had set up a perfect platform to lift their 5th World Cup title and a perfect send off to Michael Clarke.