Southpaw willing to bat wherever the side needs him to

Australia batsman Usman Khawaja said the winning feeling is back in Australian cricket and their form ahead of the World Cup is no fluke.

Australia concluded their World Cup preparation on an emphatic note, beating a struggling Sri Lanka by five wickets in their second and final warm-up game in Southampton on Monday.

In the run-up to the World Cup, Australia turned their fortunes around when they registered a come-from-behind 3-2 ODI series victory over India in India.

“Behind the scenes we’ve put in a lot of hard work, you need that to be able to compete at this level. Everyone has put in a lot of effort. We had India over in our place for a series and while we lost, that was a big turning point for us,” Khawaja, who scored 89 off 105 balls in Australia’s final warm-up match on Monday, said.

“They’re one of the best sides and we gave them a run for their money. Then we went to India, lost the first two matches and went on to win the series. We always had the confidence we could do that,” he was quoted as saying in ICC media.

The 32-year-old is hopeful that their positive dressing room would translate to victories on the biggest stage of all when the defending champions begin their campaign against Afghanistan in Bristol on June 1.

“Winning is a habit, we say that a lot among the team. We want to keep that going, we might have lost that before, but we might have found that again heading into the World Cup.

“I know what it feels like when you’re losing and I know what it’s like when winning, it’s obvious which one you want,” said Khawaja, who faced an injury scare on Monday when a blow to the knee brought a premature end to his day in the field before he recovered well to anchor the Australian run chase.

Although Australia’s top order remains a point of discussion but Khawaja is happy to fulfil his role in the team at whatever position.

“I wasn’t thinking about securing an opening berth, we’ve looked to be clinical and not take it lightly. We’ve won three warm-ups here, and it was more about us continuing the winning ways in Dubai and India.

“I was concentrating on contributing to that winning run - some things are just out of your control. It’s a mindset thing, opening is slightly different to three which in itself is different to five,” he explained.

“I do love opening, that’s where I’ve batted my whole life in one-day cricket. But it’s about winning games and doing the best of the team - I’d rather score a duck and win than a century and lose,” Khawaja added.

NEWS
Australia sweat on Warner's fitness
If Warner is available, Langer will make a decision between Khawaja and Marsh for the final spot 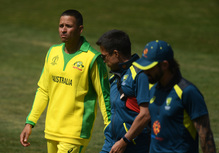