South Africa captain Faf du Plessis believes Australia’s World Cup confidence is akin to an “extra player” even though he did more than most to ensure the holders entered the semi-finals on the back of a defeat.

Du Plessis hit 100 in a total of 325-6 that proved just enough to give the Proteas a 10-run win over Australia at Old Trafford in the last match of group stage.

Saturday’s success came after South Africa’s own hopes of a last-four place had long since disappeared.

But the result meant Australia could not finish first in the 10-team table and so deprived them of a seemingly ‘easier’ semi-final against fourth-placed New Zealand at Old Trafford on Tuesday.

Aaron Finch’s team will now face a revitalised England at Edgbaston on Thursday instead.

Australia, however, have won the World Cup a record five times and du Plessis said that history of success made them strong contenders to go all the way to the final at Lord’s on July 14.

“I think Australia and India have proven it time and time again,” said du Plessis after producing South Africa’s first and only century of this World Cup.

“They are teams that win big games. It’s hard to look past Australia and the success they’ve had in winning World Cups, as much as we would like to say we want to compete with that.

“The confidence that an Australian team comes into a World Cup with is just like an extra player on your team.”

Du Plessis, asked to name the winner of this World Cup, replied: “They (Australia) would probably prefer playing against New Zealand, but I would say one of Australia or India.” 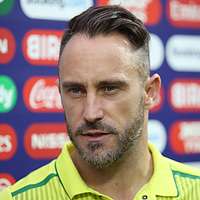