Bangladesh need an upheaval of fortunes at the T20 World Cup 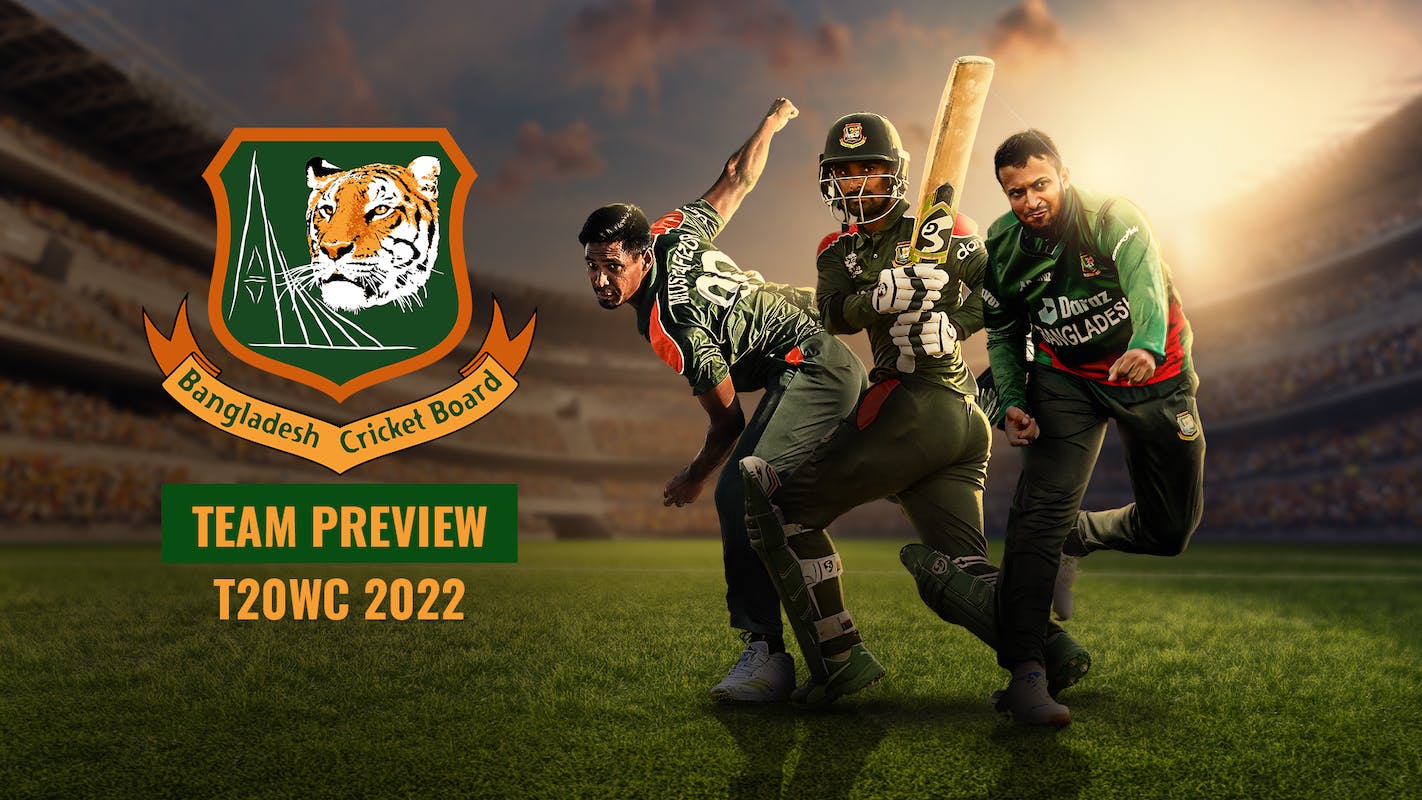 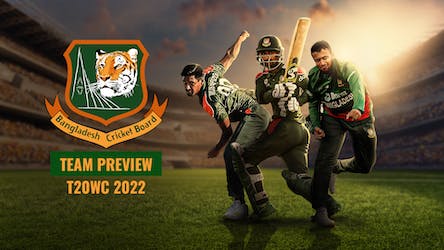 Bangladesh need an upheaval of fortunes at the T20 World Cup

If there is a rating system for teams with most problems, Bangladesh would outrank every team at the T20 World Cup. For a team seeded in the Super 12, they have lost 14 of their 19 matches since the last World Cup.

The first and foremost is the tectonic shifts in their leadership department. Shakib Al Hasan has been named their captain for the T20 World Cup and picked up Test captaincy, but there is no clear roadmap for that continue. The concern is not whether Shakib is committed to playing for the national team, but which format is he loyal to. His constant run-ins with the Bangladesh Cricket Board’s hierarchy over his availability have only added to their instability in the leadership roles.

By leaving Mahmudullah, their former white-ball captain, out of their World Cup squad, the batting department has work cut out for them in dealing with tough situations. Then there is the uncertainty in coaching roles with Sridharan Sriram given the reigns until the World Cup and Russell Domingo being restricted to being just the Test head coach.

Sriram was promoted to his position with less than two months to bring the team out frpm a glut of mediocrity to challenge for a world title. Adding more to this, Bangladesh axed Sabbir Rahman and Mohammad Saifuddin from their initial World Cup squad and roped in stand-bys Shoriful Islam and Soumya Sarkar a day before the deadline. While Sriram maintained that they are aware of their combinations, replacing players based on performances at the last minute doesn’t send a good message.

Bangladesh lost to Scotland in their First Round opening match but beat Papua New Guinea and Oman to qualify for Super 12. They were eliminated in the Super 12 stage after finishing bottom of the Group 1 without a single win.

Bangladesh are a team in transition and reaching the semifinals at the 2022 World Cup is a more realistic expectation.

Bowling has been their strongest suit over the last 12 months. They have the best powerplay economy of 6.3 among all 2022 T20 World Cup teams. They have used both spinners and pacers with optimum effect during this phase with Mehidy Hasan leading the attack with six wickets from 10 games at an economy of 4.6. Medium pacer Nasum Ahmed has been equally effective, picking up seven wickets from nine games while maintaining an economy of 5.9. 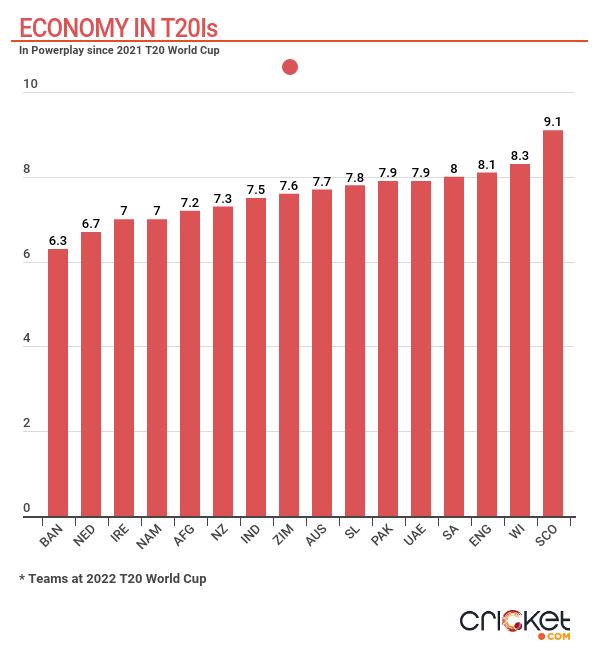 The Tigers have fared better than most top teams in the middle overs despite picking up only 34 wickets in 18 matches. They have an average economy of 7.7 which is the same as India and Pakistan.

These are the few things they have done right, but lot of aspects need fixing.

A move that could work: Mustafizur Rahman has been Bangladesh’s go-to bowler at the death for the past few years, but his usage has been more in the middle overs off late. The leftarmer has bowled 15.1 overs in the middle phase over the last 12 months where he has an economy of 7.8 after 11 innings. He’s picked up 14 wickets from 14 overs at the death, which is a need of the hour for Bangladesh. They have rotated their bowlers quite effectively with the new ball, but why use your trump card in times where others can chip in?

Among the teams that have qualified for the 2022 edition, Bangladesh have been second worst while batting in the powerplay with an average run rate of 7.1. Only UAE and Pakistan are marginally below them at 7, but both the teams compensate for it in the middle overs 7.4 and 7.8 respectively. Bangladesh, meanwhile, remain stagnant at 7.1. 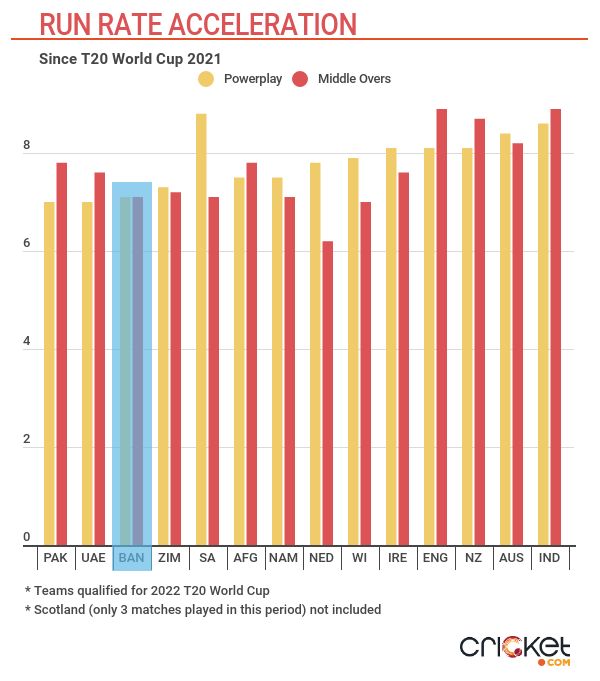 It has to do with the absence of a settled opening pair. Soumya Sarkar has been in and out of the team for a while. Litton Das is the experienced rock in the top-order to open alongside Nazmul Hossain, but Bangladesh have used the pairing in just once since the last World Cup. This places burden on their batters at the death where they have lost a wicket every 11 balls.

Higher-ranked teams have lost a lot more wickets in lesser time, but its a direct result of going for the broke near the end. Bangladesh, however, have a boundary percentage of 47 at the death, which is the worst for teams in the Super 12.

They have also been shambolic while defending targets. The Tigers have conceded a boundary every five balls while leaking at 9.8 runs per over at the death. They have only managed to defend a total thrice in the last 12 months with two coming against an inexperienced UAE. Even if the sub-continental conditions where batting second has almost become a formula, Bangladesh had failed to defend scores in New Zealand and West Indies.

Bangladesh's flaws clearly outweigh their strengths in some areas of the bowling and will need an upheaval of fortunes to make their performances count. 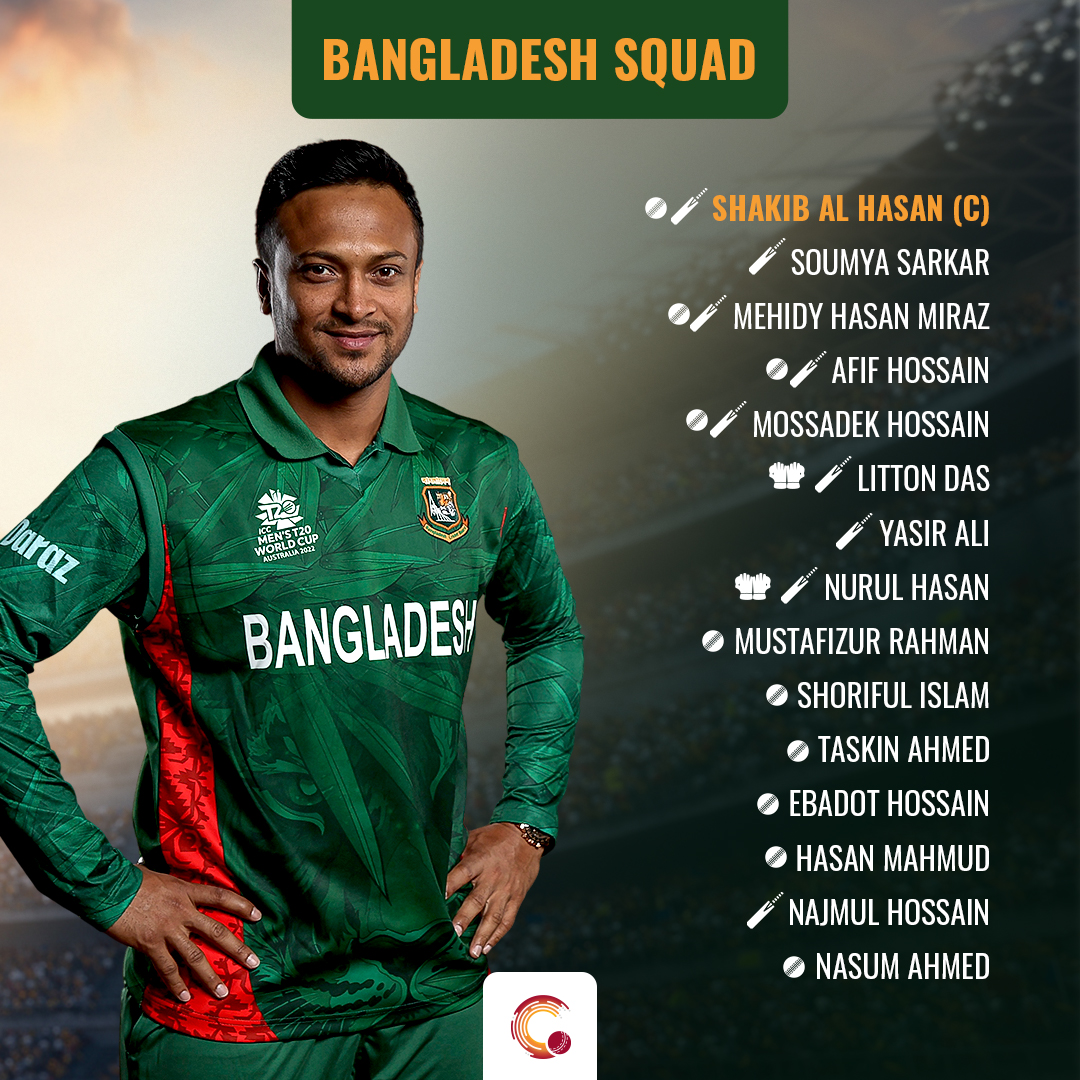 Bangladesh have done enough experiments in the Tri-series against New Zealand and Pakistan where they lost all four matches. It has prompted the management to drop Sabbir and Saifuddin from the squad and bring in Soumya Sarkar and Shoriful Islam.

Sarkar loses all his impact beyond No.3 which means captain Shakib has to bat at No.4 while Shoriful, Taskin Ahmed, Mustafizur and Hasan Mahmud are likely to be their frontline pacers. Mosaddek Hossain offers a fifth pace option, but whether he will bowl or not is a mystery. Mehidy Hasan and Shakib are the fixtures for the spin allrounders roles with Mehidy leading the bowling attack.

Bangladesh will take on the Group A runners-up from the Frist Round in their campaign opener on Monday, October 24 at the Bellerive Oval in Hobart.