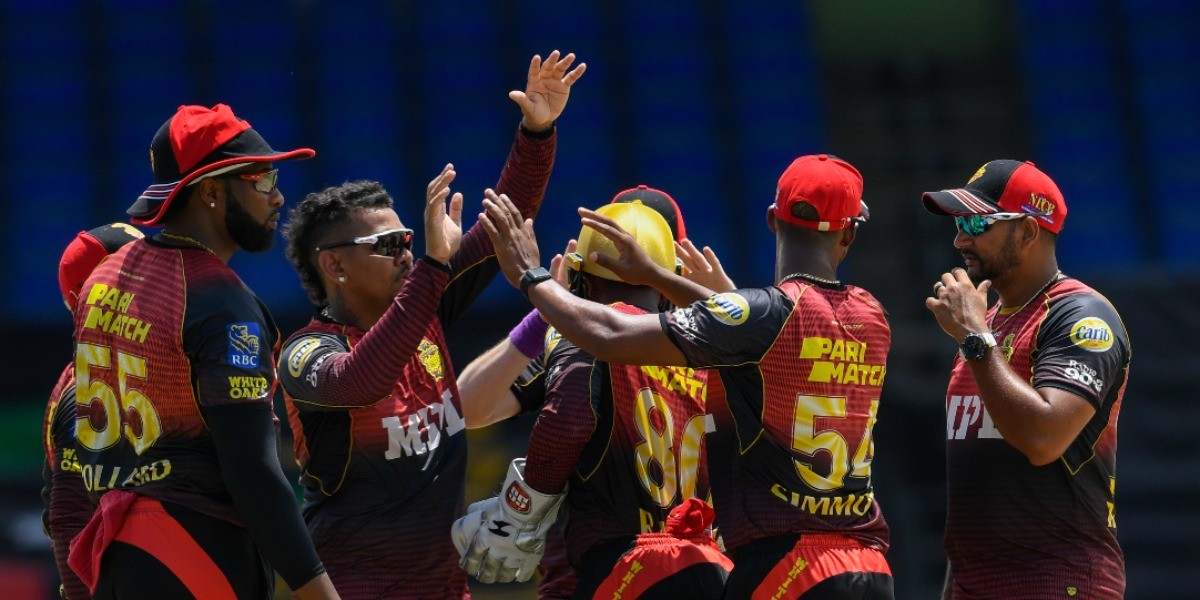 Fresh off a win against the Guyana Amazon Warriors, the Barbados Royals will clash with the Trinbago Knight Riders at Warner Park on Thursday (September 9) in what will be a must-win match for them to keep their semi-final hopes alive. The win on Tuesday (September 7) was just the Royals’ second win of the season, thus it will be vitally important for the Jason Holder-led side to keep the momentum going.

On the other hand, the Knight Riders endured a shaky start to their title defence, but are now one of the more in-form teams in the competition, having registered back-to-back wins. The Kieron Pollard-led side are looking to close down the gap up top, and a victory against the Royals will not only take them to double figures, but also nearly assure them a spot in the knockouts.

The clash on Thursday will be the two sides’ second meeting this season, with TKR having emerged victorious in the first H2H clash that was played towards the end of August.

Unlike each of the two venues that were used last season, Warner Park in St Kitts, this season, has produced very good cricketing wickets that has had something for everyone. And recent trends suggest that the surface has been getting better to bat. Thus far in CPL 2021, teams have averaged 161 whilst batting first, but this number has been on the rise of late.

In the last 7 matches at this venue, teams batting first have breached the 160-run mark four times, with two teams posting totals over 180. One of the two teams was, in fact, the Barbados Royals, who scored 185 in their last match at this venue. To put these numbers into context, only once in the first 14 games did teams post a total over 180. 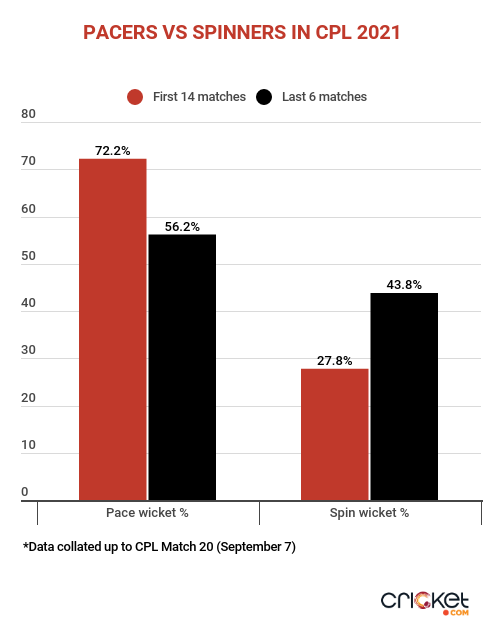 Recent trends also suggest that spin is starting to play a significantly more important role than it did in the first half of the season. The first 14 games of the season were dominated by pace, with the speedsters accounting for 72.8% of the wickets compared to just 27.8% by the spinners. But there has been an almost-even split in the last 6 games, with spinners accounting for 43.8% of the wickets to fall. The number of wickets taken by pacers has nearly fallen by 20% (56.2%). The economy rate of the pacers has also risen to 9.3 from 8.3, while the ER of spinners has fallen to 6.1 from 6.5.  If the data is to be believed, then it might be worth keeping a close eye on the slower bowlers in the matches to follow. 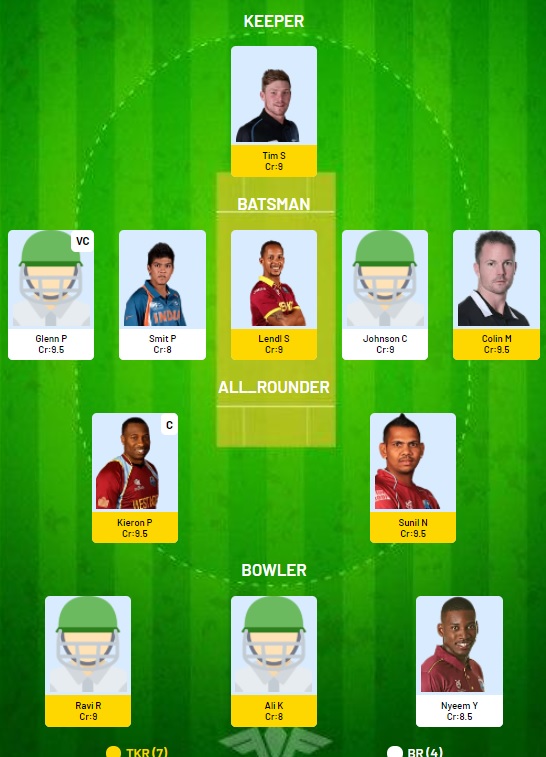 The team we’ve picked above has the ideal mix of slower bowlers, pacers, finishers, aggressors and run-accumulators. But remember, while you can go for this XI, you also have the option of choosing your own team from Cricket.com’s Fantasy Research Centre. You can use this tool to build your team with the help of algorithms. Based on your preferences, the platform will guide you to create the ideal fantasy XI.

Indeed, it is hard to look beyond TKR and Windies skipper Kieron Pollard for captaincy after what he did in his last encounter. Pollard walked in at No.4 and smashed 39* off just 18 balls, but it is worth noting that he is also TKR’s highest run-getter this season, having scored 169 runs in 7 innings at an average of 42.25. Captaining Pollard is always a safe bet, for the all-rounder seldom disappoints.

Glenn Phillips usually goes on a run of consistent scores once he gets going, thus after his 44 against GAW, it would be smart to lay your faith in the Kiwi batter. He is yet to light up CPL 2021, but Phillips is already the highest run-getter for the Royals, who have been languishing at the bottom. The right-hander showed positive signs versus Guyana, thus he will be a player to watch out for come Thursday.

Ravi Rampaul went under the radar against Jamaica due to Ali Khan stealing all the limelight, but the veteran delivered yet again, picking 2 wickets. The 36-year-old has now picked at least 2 wickets in each of his last six matches. A pretty ludicrous streak. It would be a blunder to not back Rampaul in the midst of such a remarkable purple patch.

Tim Seifert has become the king of cameos, and the New Zealander showcased his hitting ability yet again versus the Tallawahs, smashing 24* off just 8 balls to give TKR the lift they were looking for. Another player in red-hot form, it goes without saying that the wicket-keeper batsman is someone who could do serious damage in Thursday’s contest. 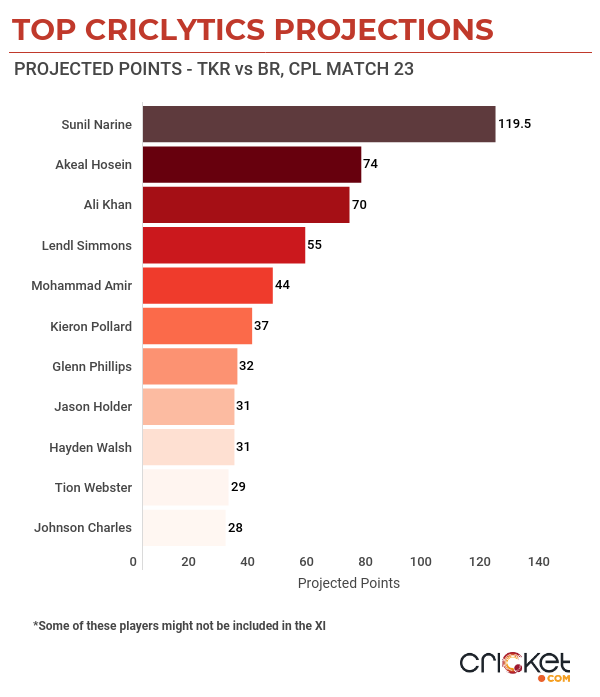 The battle of the skippers is undoubtedly the player match-up watch out for. Holder has dismissed Pollard twice, but the TKR skipper has struck 66 runs at a SR of 220 against his BR counterpart.