Bombs, dogs, bees and what not 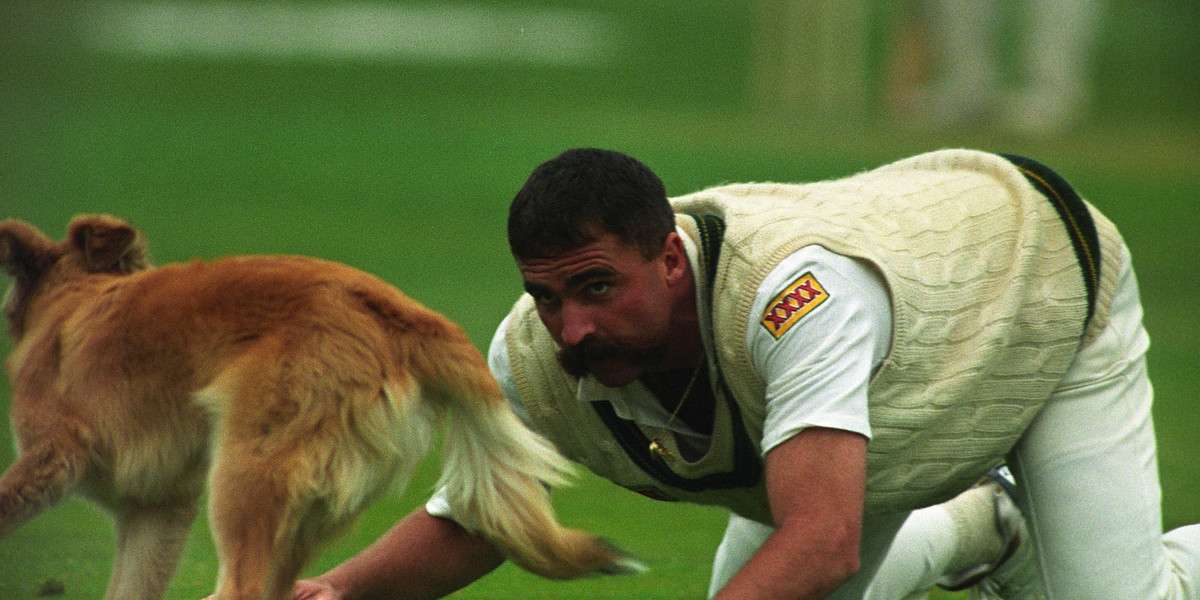 Bombs, dogs, bees and what not

As we can't see any play right now, we look back at some extraordinary circumstances which have halted live cricket before

It has been 39 days since an international cricket match happened - when Australia last played New Zealand at the Sydney Cricket Ground. 37 days since any form of professional cricket occurred - the last being at the Pakistan Super League. In an era when cricketers complain of a truckload of matches, this break, caused by the COVID pandemic, is a strange scenario. The only other times when cricket was voluntarily brought to a standstill were during the first and second World Wars.

Here we take the opportunity to recall extraordinary circumstances which caused a break in cricket, in live games that were brought to a halt, through pictures. While rain interruptions, bad light, power cuts are usual bummers, cricket in its rich history has seen a few unforeseen incidents leaving fans bewildered.

The flying bomb over Lord's

The love for cricket can be gauged from the fact that a game between the Army and Royal Air Force at Lord’s during World War II in 1944 attracted more than 3,000 spectators. In times when cricket was thin, the game also saw a number of Test cricketers of that era. All those players, however, had to lie flat on the ground upon hearing a V1-flying bomb in the vicinity of the venue. Thankfully, it crashed outside the stadium. When play resumed, smoke emitting from the affected area was clearly visible over Lord’s. 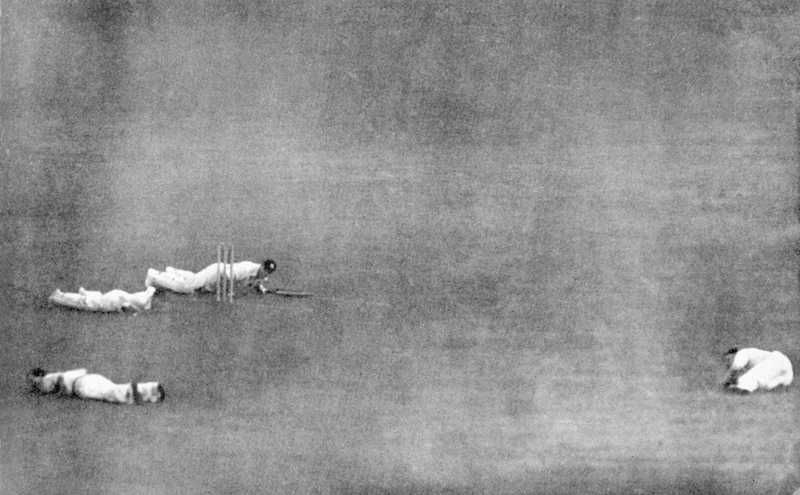 Bomb that was not to be

Another incident involving bombs arose in 1973. West Indies toured England when the country was on high alert. It was Lord’s again where, on the third day of the Test, the MCC secretary received a phone call carrying false information about a bomb that was planted inside the stadium. The message was sent to the umpires but play surprisingly carried on until the groundsmen was ready with his team to put the covers on the pitch.

As the players finally began their desperate pursuit towards the pavilion while the groundsmen approached the pitch, the crowd, composed of the Caribbean contingent, also commenced a run to the ground on hearing the announcement. They found a good seat on the outfield around umpire Dickie Bird who had taken centrestage on the covered pitch to keep the spectators away. Later, he said that it was the safest spot in the stadium since the bomb can’t be planted underneath the turf.

Play could not start for more than an hour which was spent in searching the stadium. Afterwards, the spectators took their own time to settle down in the stands. 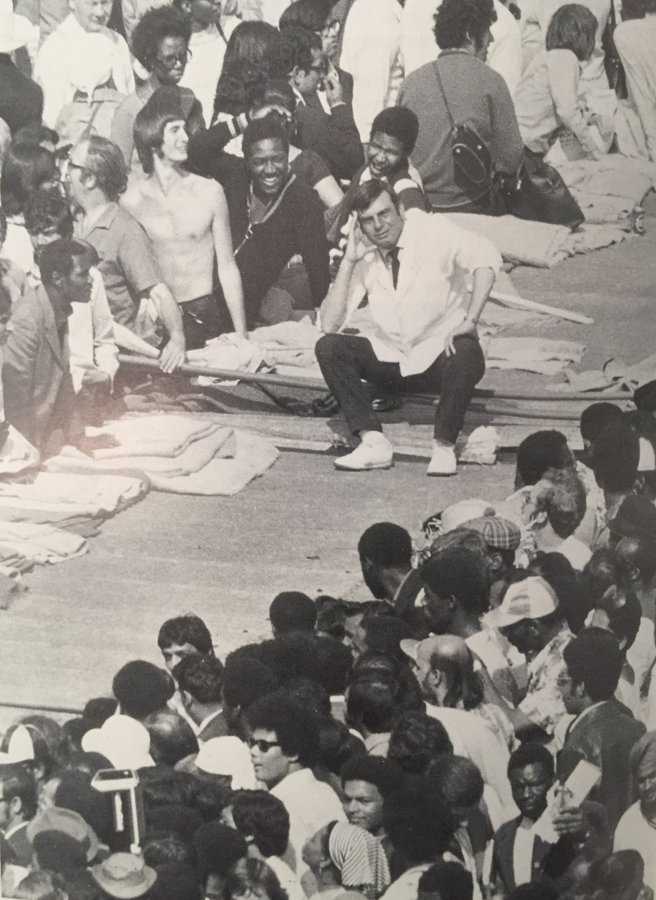 Two years later, another ground invasion took place in England, this one of a different kind. There could be no better place than a World Cup match to spread your propaganda and that is what a group of Tamil demonstrators must have thought when they ran onto the pitch during Sri Lanka’s game against Australia at The Oval in the 1975 World Cup.

A group of around 20 youngsters occupied the crease delaying the start of the match. Their banners protested an assumed racial bias in the selection of the Sri Lankan team. It did not take long for the police to get rid of them and get play underway. 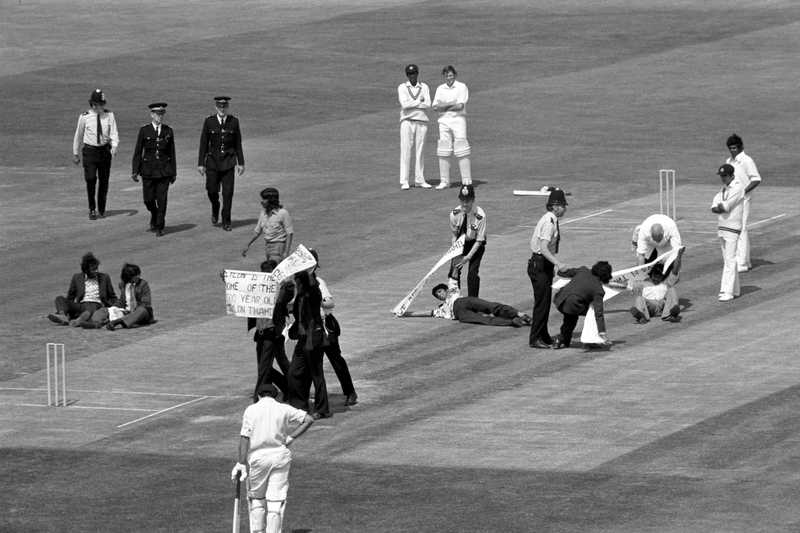 From one crowd invasion to another, SCG was deluged by schoolchildren towards the end of the third Ashes Test in 1963. Australia were still two runs away from victory but the kids’ miscalculation led to chaos. The main cause of their inopportune excitement was their eagerness to take the stumps home. As seen in the picture, the umpire at one end is guarding the stumps in the middle of the uproar while the one at the other end seems to have lost them already.

After the pandemonium settled down, Australia knocked off the deficit to level the series 1-1 with two more Tests to go. 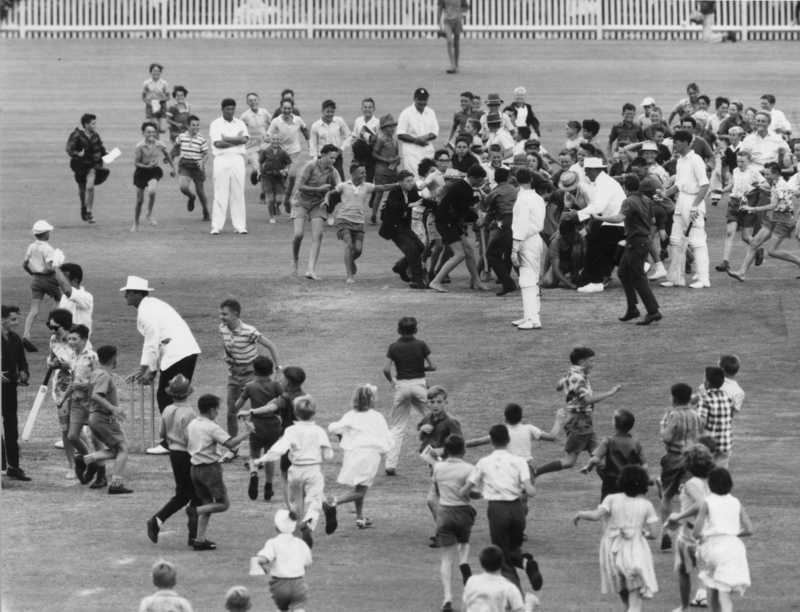 The third Ashes Test in 1993 was also greeted by an uninvited visitor. As Merv Hughes settled into his run-up for the first ball of the match, he saw himself being approached by a dog. Animals stopping play is not bizarre but this might be the most famous of all such incidents.

Fascinated by the guest, Hughes dropped the ball paying his undivided attention towards the dog asking him to leave politely. It did not take Big Merv to become friends with him soon and Michael Slater carried the dog across the boundary ropes. As it is believed, the dog was later adopted by one of the immediate callers and was named Merv. 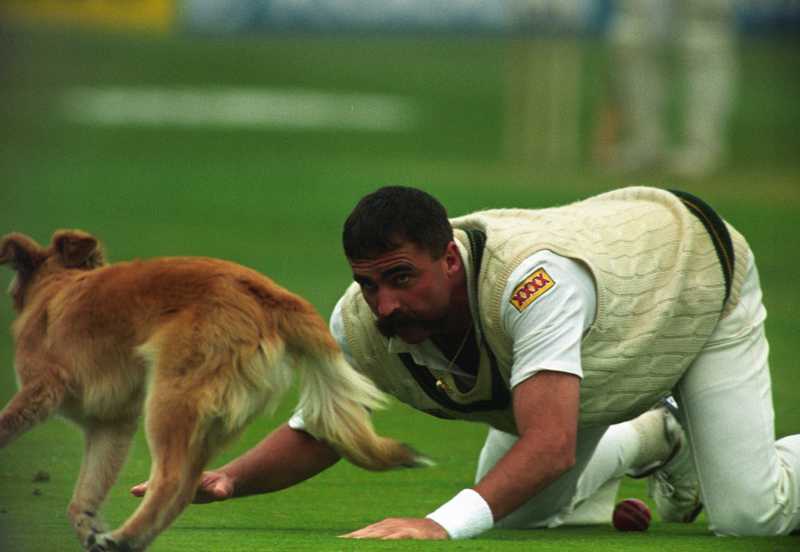 A Test match that came in way of the bees

Like dogs, bees have also swarmed the cricket grounds quite a few times but none of those scenes have been captured as wonderfully as the one at Feroz Shah Kotla in Delhi. The Australian batsmen, Ricky Ponting and Matthew Hayden, umpire Billy Bowden, the Indian fielders along with the bowler Anil Kumble hit the deck during the third Test between India and Australia in 2008 as the bees refused to change their route. This was also the final Test of Kumble’s career. 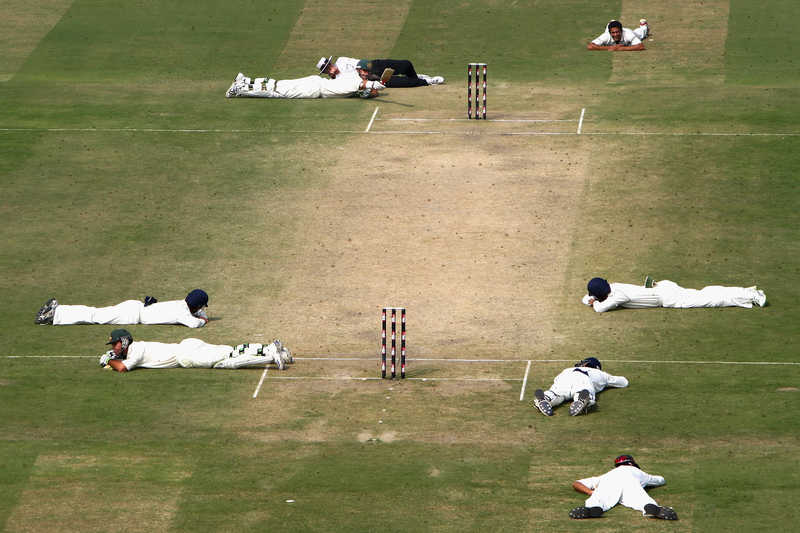 Home boy to the rescue

Play was interrupted in the fourth match of the tri-series between Australia and England at MCG in 1999. It is one of 11 ODIs in which Shane Warne captained Australia. When the home side were cruising towards their target, the crowd started throwing objects at the England fielders. Alec Stewart, England’s captain, seeked Warne’s help in persuading the crowd to behave.

Warne, the home boy and captain, walked out of the hut. He wore a helmet portraying as if he was afraid of being hit. Walking towards the crowd with Stewart, he asked them to refrain themselves from throwing objects. The crowd responded by bowing down to their hometown hero. 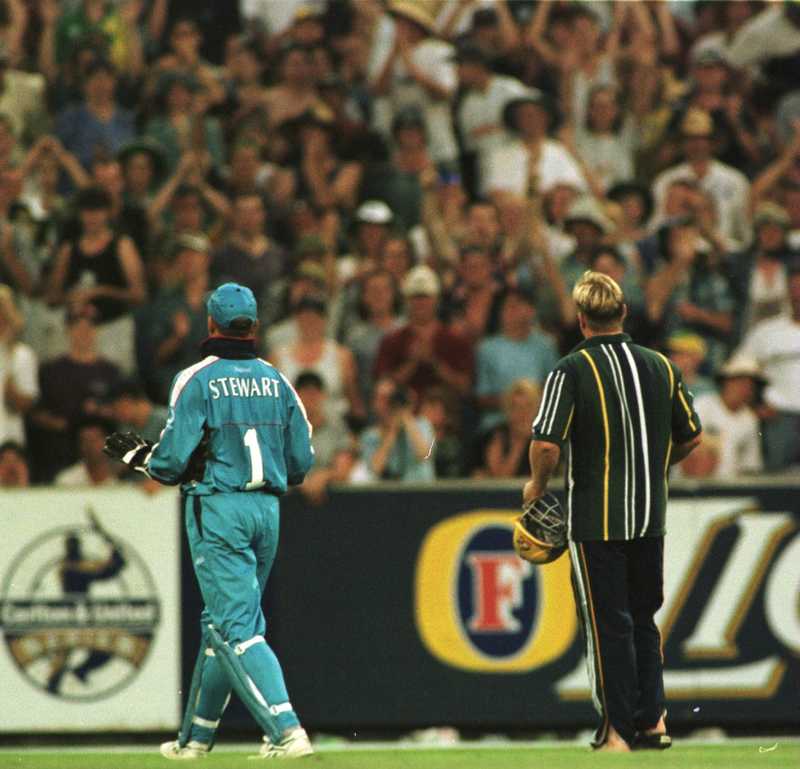 In another such instance, Rohit Sharma and MS Dhoni laid on the ground when the spectators intervened in the third ODI between Sri Lanka and India by throwing water bottles on their cricketers. As the crowd picked a wrong measure to show dissent towards another ordinary performance from their side with India coming in touching distance to make it 6-0 on the tour, the two batsmen who had forged a long partnership saw it as an opportunity to take a break. 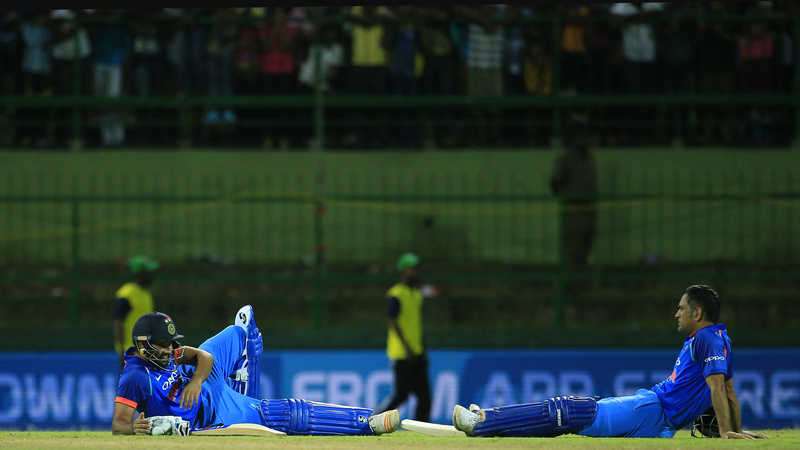 Too bright to bat

Another scenario that has stopped play many times but seems to amaze us every time it happens. It was last witnessed during India’s first ODI against New Zealand in 2019 at McLean Park in New Zealand. The awkward angle of the setting sun, reflecting straight into the batsmen’s eye halted play for more than half-an-hour.

The east-west alignment of the pitch at the venue has made this a norm here. No precautionary action was taken for this game since the organizers were expecting a cloud cover which did not happen. The Indian batsmen, Virat Kohli clearly troubled by the sun and Shikhar Dhawan, walked off the pitch as play was stopped due to the scorching sun. 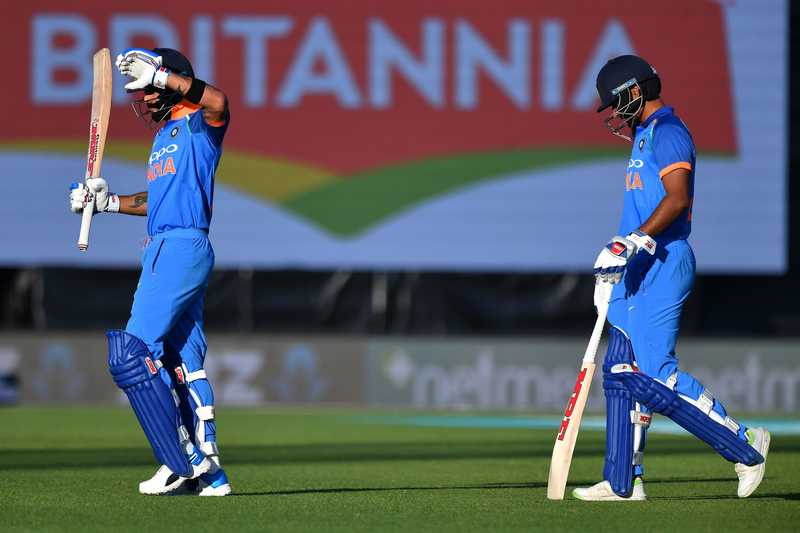