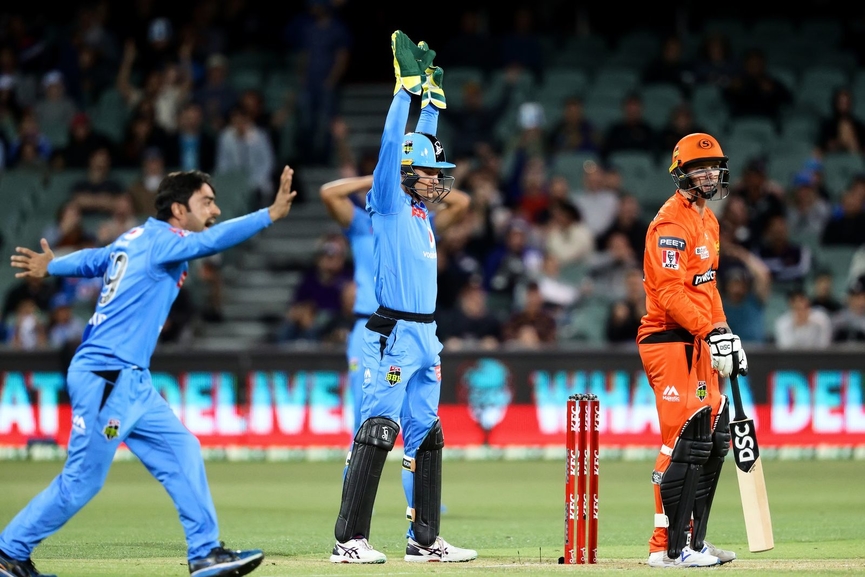 While the Strikers look to complete a double, Scorchers have not tasted a victory in their four matches so far

Adelaide Strikers and Perth Scorchers clash in Match 21 of the Big Bash League (BBL) 2020-21 on New Year’s Eve in a bid to sign off 2020 on a high. The Scorchers are in desperate need of a win, considering not having won a single game in the competition so far, while the Strikers, who have won two in a row now, will look to prolong their momentum.

While Adelaide Strikers may not have had the best of time as a batting unit, they have more than made up for it in the bowling department. Their bowling trio of Peter Siddle, Wes Agar and Rashid Khan have been their most lethal weapons, which has kept the Strikers’ campaign from going kaput.

In fact, only Melbourne Stars have picked up more wickets than Adelaide Strikers in this edition of the BBL so far, underlining the terrific work their bowlers have done. Scorchers, on the other hand, are at the rock bottom in this list, which does not bode well for them. However, one can argue that they were denied the opportunity of moving up the ladder as their match against Stars was washed out, but the reality is that they have not really created as many wicket-taking opportunities as they would have liked. Scorchers' runs per wicket (30.8) and balls per wicket (22.9) ratio are the worst for any team this season. 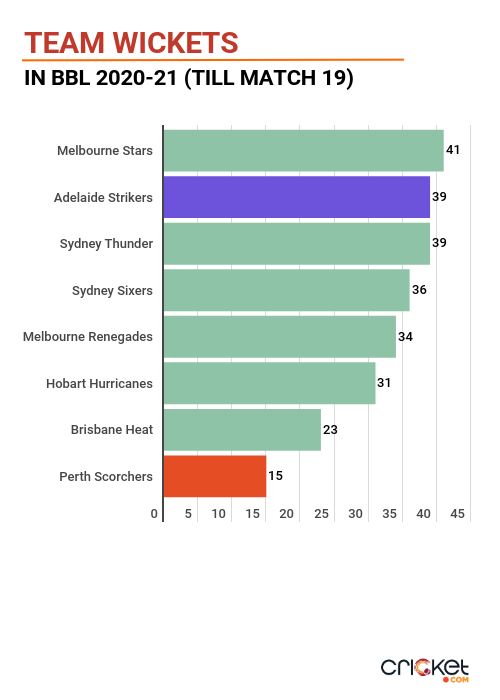 In the batting department the top seven have really let the Strikers down, while the tail (8-11) have salvaged some pride for them and have scored at an average of 30, which is the most among all teams. For the Scorchers on the other hand, while their entire batting order still remains a mess, it is the performance of their top-order’s (1-3) that has hurt them the most, averaging just 15 – the lowest among all teams. It’s safe to say, that the top three have not really been doing their jobs as well as the team would want.

As the rules are a tad different from you usual T20 matches, with mandatory powerplays now being restricted to just the first four overs, the teams are having to adapt to a different strategy. The batting team gets to choose the two over Power Surge overs – a phase in which the fielding restrictions would apply. At an average 85 to 103 runs are being scored in the final 10 overs and hence, the team’s focus should ideally be to restrict the batsmen in the first 10.

While both Strikers and Scorchers have been scratchy in the first four overs with the worst bowling average and strike-rate, at least the former get their act together in the next six overs, while the Scorchers remain in shambles, with the worst average (56.7), strike-rate (36) and the third worst economy rate (7.8).

While the Strikers’ bowlers have been formidable when it comes to picking up wickets, the Scorchers are yet to find the right combination of bowlers that could do the job for them.

Ring in the changes

Jason Behrendroff has managed just a wicket in three matches so far and this could be the right time for the Perth side to test out the bench. The Scorchers could either go in for Joe Paris in a like-for-like replacement or rope in Cameron Gannon to partner Jhye Richardson, who has picked up six wickets from four matches so far, including an impressive 3 for 30 in the previous game.

Scorchers welcomed Jason Roy into the XI in the previous game after he served a quarantine period and they will need him to fire too. Other than Roy, Scorchers have five to six more hard-hitting batsmen down the order, like Ashton Turner and Colin Munro, who have not found their feet yet, but when they click, Scorchers could be as dangerous as any team. Scorchers will have to ring in the changes before it is too late for them – be it in personnel or their approach.

As far as the Strikers are concerned, it will be interesting to see how long they persist with Matt Renshaw. The southpaw has scored just 76 runs from five innings this season so far and might not be a bad idea to give him a break and try someone else – like Ryan Gibson or Harry Nielsen, for example.