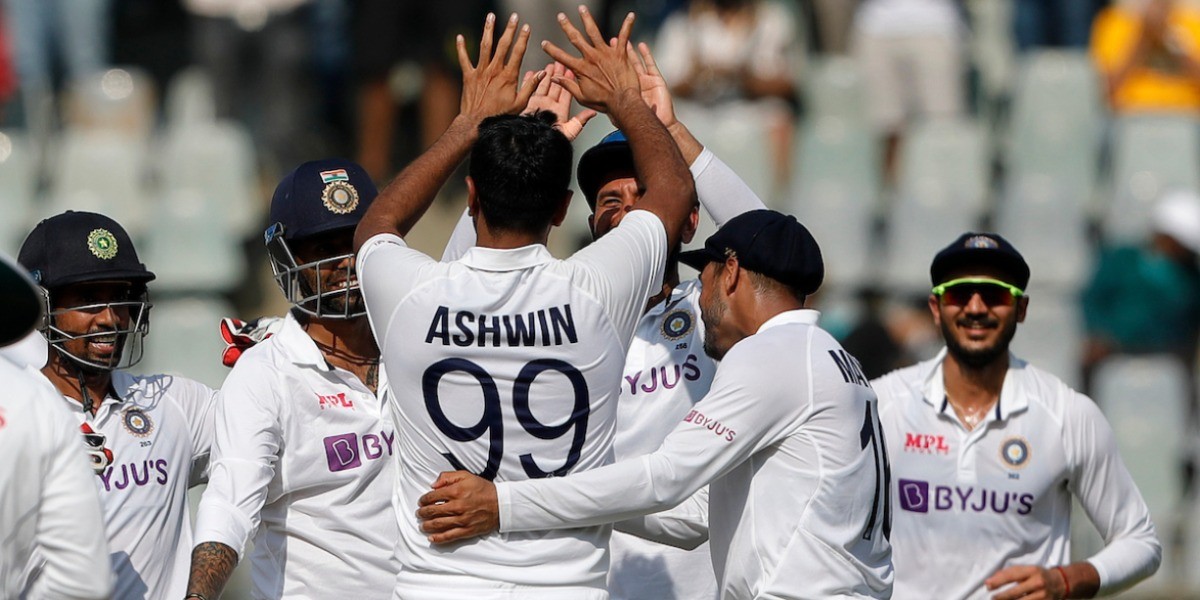 If day one was Mayank Agarwal’s century, day two was a day for the bowlers

At the end of first day’s play, India stood tall, on the back of Mayank Agarwal’s brilliant 120, a knock that had plenty of glorious moments, especially with the way he attacked Ajaz Patel, New Zealand’s most successful bowler on the first day, with four wickets. With the history in Mumbai suggesting the second day to be yet another blissful day for the batters, it was expected to be raining runs.

However, after the first two sessions, 12 wickets fell on day two, indicating how tough a day it was for the batters to stitch together a partnership. But the early part of the day was the partnership between Axar Patel and Mayank Agarwal, after Ajaz Patel ripped through the batting unit, with two wickets off his first over on the day.

The left-arm spinner was crafty in his approach and dismissed Wriddhiman Saha and Ravichandran Ashwin off brilliantly set up deliveries. Once Axar walked in to bat, the pressure was on him and Mayank to take the Indian scoreboard to a decent place, what happened next?

Batting was tough on day two, it was drastically different to what was on offer in Mumbai on day one. Ajaz’s consistent yet crafty display stood as a thorn in India’s rosy-passage of play. Yet, the two batters, Mayank and Axar found a way to go past his challenge, stitching a brilliant partnership. What was more impressive than just the runs were the way the two batters took the challenge head-on. 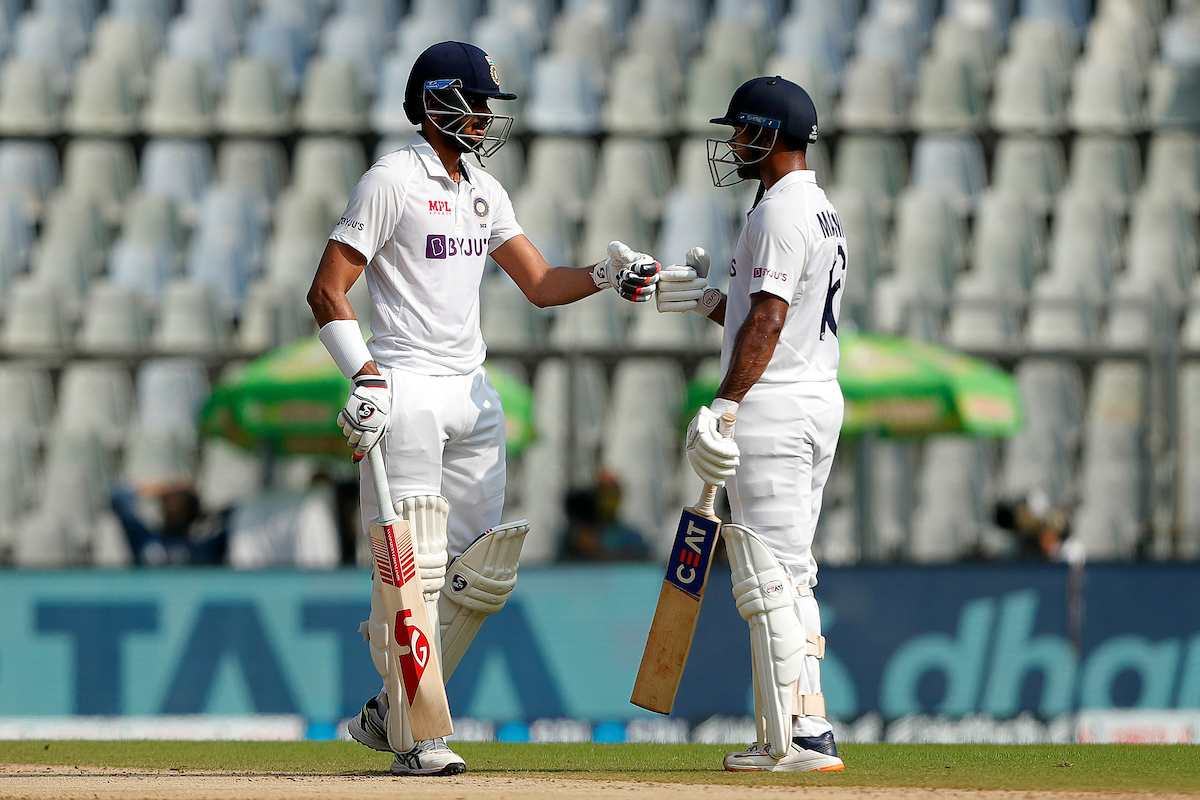 Together, they put on 67 runs, and more importantly, Mayank converted the century into 150. Axar, on the other hand, scored his maiden half-century in Tests, off 128 balls, taking the odd risk against Will Somerville, scoring five boundaries and a six. If it wasn’t for the partnership between the two, which stood out on a day where batting was tough, India would have fallen well short of the 300-run mark.

Axar, in particular, after the intense scrutiny over his technique earlier in the day batted well against the left-arm spinner, took on Tim Southee and Kyle Jamieson. Mayank, just ahead of India’s away series against South Africa all but sealed his place in the squad, with the scintillating 150, tackling 311 deliveries while still striking at 48.23.

Jim Laker, Anil Kumble and Ajaz Patel: in that order. Ajaz didn’t perform well for five overs, ten overs, one spell, two spells, he did it for 48 overs. While it was strenuous work for the left-arm spinner, he stuck to his plans, bowling it straight and simple, attacking the stumps. Nine out of the ten dismissals for him were pitched on good length with the ball turning sharply or coming in sharply to beat the batters.

“Obviously quite a special occasion for me; not only me, my wife, my mom and dad, my family. A very special day for me for sure. To be honest, it's pretty surreal, I don't think you ever believe you are going to achieve something like that,” Ajaz said just before the tea break. 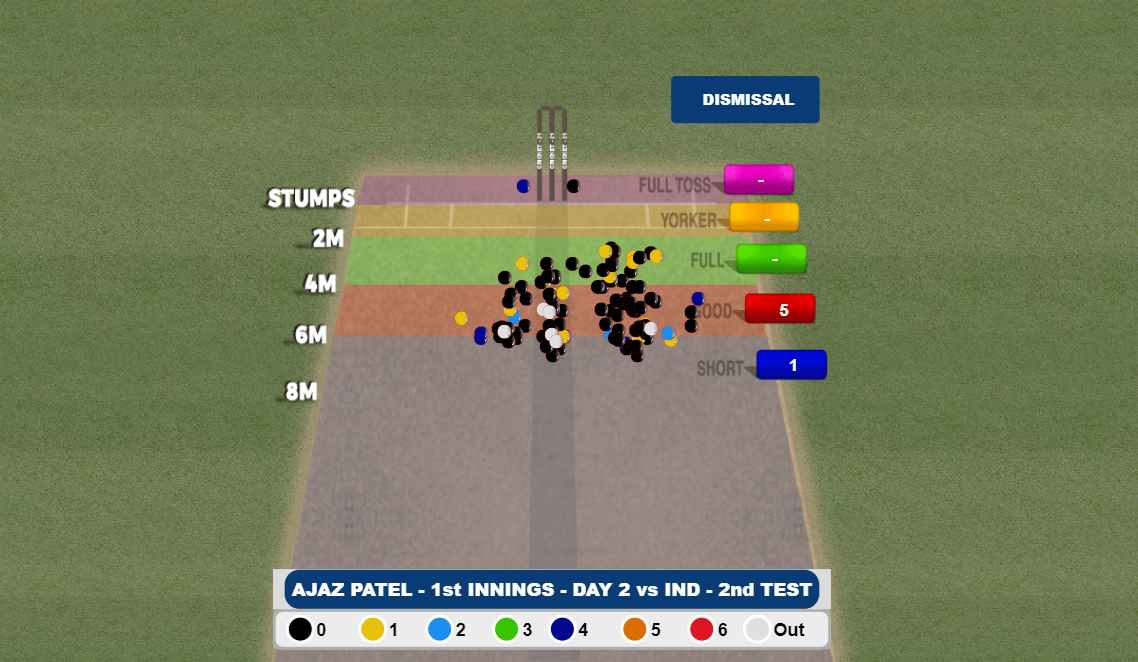 “To be born here and then come back here and achieve something like that is pretty special. I am in very illustrious company with Kumble sir as well. Don't really have any one in particular, it's just about finding good rhythm and just being repetitive and asking good questions of the batters,” he added.

And he did exactly that, he asked good (very) questions of the Indian batters, made a few doubt on where their edges were and had a real mental edge over all of them. 10/119, Ajaz really had a historical day here in Mumbai

India’s quick wrap with the ball

When India came out to field, it was almost certain that the new ball would be shared by spinners but Virat Kohli insisted on giving the ball to Mohammed Siraj and Umesh Yadav. In complete contrast to what happened in the first innings, it was the heat of the pacer – Siraj – who picked up the first three wickets with raw pace.

But once the spinners were into the picture, with Axar Patel and Ravichandran Ashwin, the wickets started crumbling under the pressure. New Zealand lost their way from 17/3 to 53/7 before eventually succumbing to their lowest total in India, 62 all out. It is also the lowest total against India in Tests, finishing ahead of South Africa’s tally of 79 runs in Nagpur. 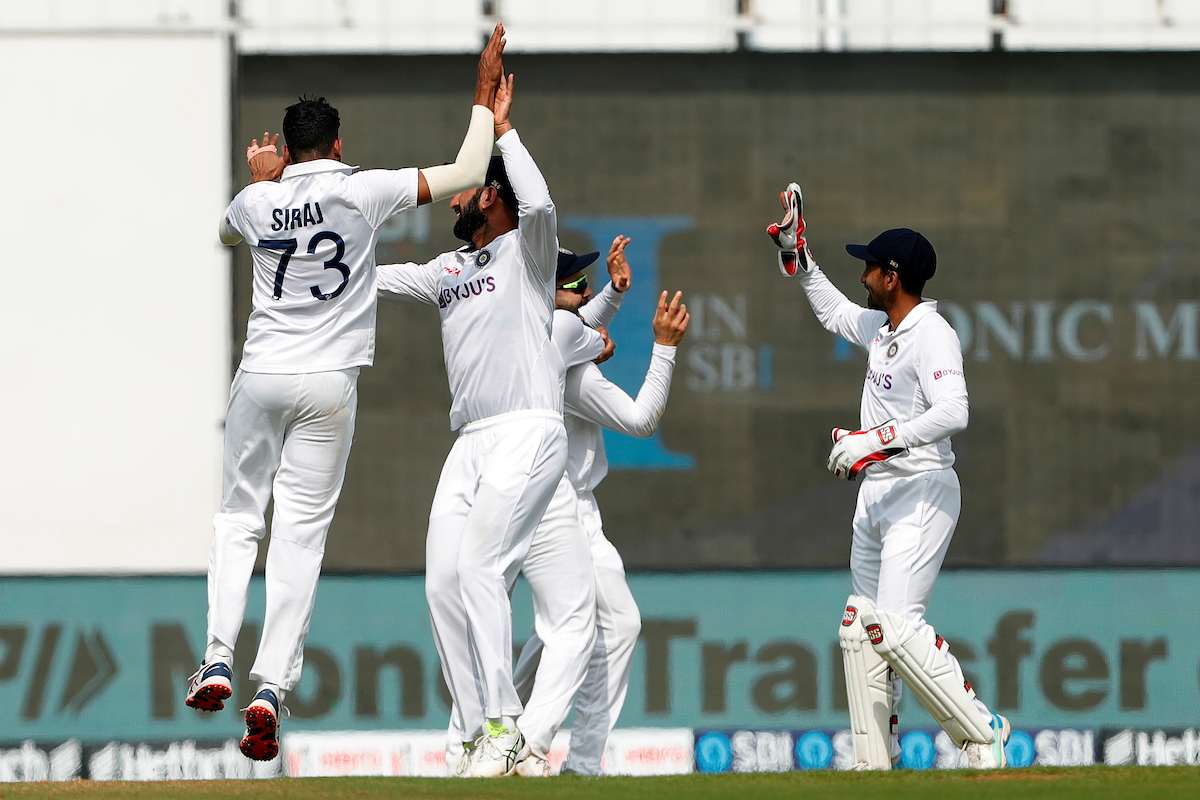 Not just that, it is also the lowest total in India in Tests, as Ravichandran Ashwin ruled the roost, picking up four wickets, conceding just the eight runs. Jayant Yadav, who returned to the squad chipped with one as Siraj and Axar shared the other five wickets.

For New Zealand, barring Kyle Jamieson’s 17 and Tom Latham’s 10, none of the other batters were able to get to a two-figure mark with the entire team facing just the 28.1 overs, unlike India’s 110 overs.

Virat Kohli – bowler’s captain or just a move for batters?

With 263 runs, India could have very easily put New Zealand bat, on the back of their lowest ever shoot-out in India (62) and created further mayhem. Such a lead would have prompted captains to usually have another go at their opponents to wrap up the Test early but Virat Kohli, being the bowler’s captain, decided to give some rest to his bowlers.

In Tests under Virat Kohli's captaincy, India have attained 200+ runs lead 16 times in the second innings after batting first. In those 16, India have enforced follow-on eight times and eight times they haven't, including today. However, it might not be the only conclusion to the move.

With a series against South Africa looming on the horizon, it might very well be India’s last opportunity to bat against a quality opposition. Several of the Indian stars, including Cheteshwar Pujara are terribly out of form, without a century in nearly three years, which might have very well prompted the Indian skipper to bat again.