Bumrah puts India in a commanding position despite Root's hundred 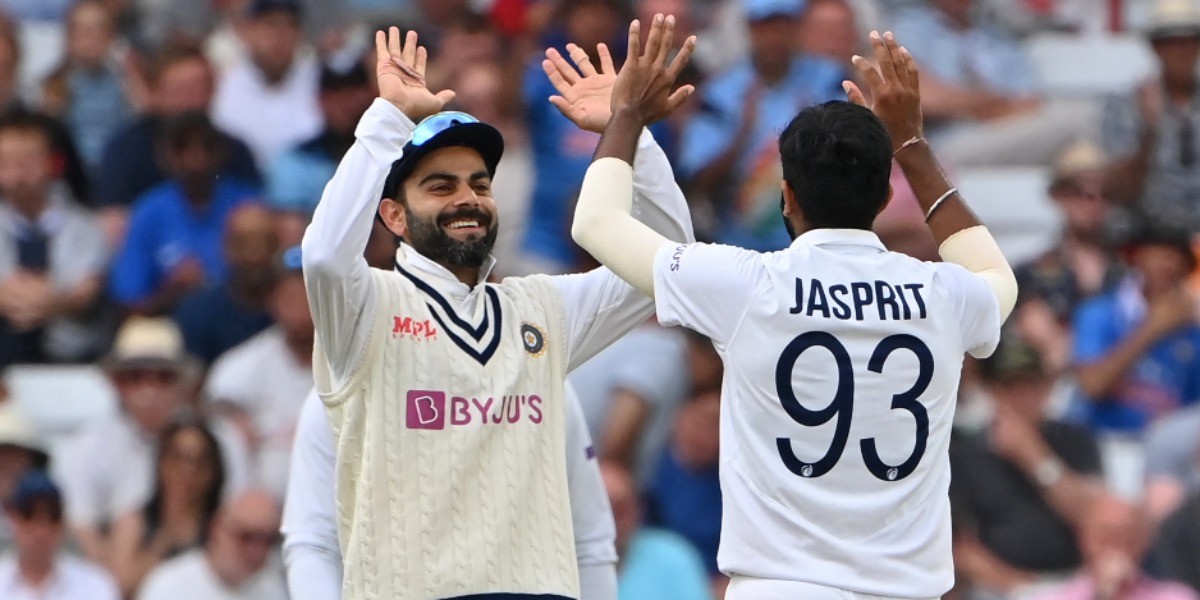 Bumrah puts India in a commanding position despite Root's hundred

The rain gods finally showered some mercy instead of water and there were no interruptions on day four of the first Test between England and India at Trent Bridge, Nottingham. We also saw some bright sunlight, but it was Jasprit Bumrah and Joe Root who hogged all the limelight on Saturday (August 7). The England skipper scored an astonishing century to keep his team in the game but Bumrah - with his impressive five-wicket haul -  and some brisk scoring turned the tide in India's favour. The visitors now need 157 runs on the final day to take a 1-0 lead in the five-match series and have nine wickets in hand.

England's top-order didn't contribute much, once again, but Root scored his 21st Test hundred and took the attack to India. The stylish right-hander crafted 14 fours in his 172-ball 107 and found ample support from the middle and lower-order. The likes of Jonny Bairstow, Daniel Lawrence and Sam Curran all chipped in with solid cameos and took England's lead past 200. Things could have gone worse for India if not for Bumrah. The 27-year-old pacer claimed his sixth five-wicket haul and helped India bundle out England for 303 in 85.5 overs.

Chasing 209, KL Rahul carried on from where he left in the first innings. The opener looked solid and even played a couple of authoritative straight drives to keep the scoreboard moving from the word go. Rahul slammed six fours before falling to Stuart Broad in the 11th over. Rahul was undone by a superb inswinger that seamed away after pitching but did manage to deduct 26 runs from the target. Rohit Sharma (12*) and Cheteshwar Pujara (12*) then ensured England didn't get an opening and took India to 52/1 in 14 overs before the stumps were drawn on day four.

The surface had eased out a bit but Mohammed Siraj and Jasprit Bumrah kept testing England's top-order batsmen by sticking to the so-called corridor of uncertainty to draw the outside edge. Siraj kept bowling scrambled seam to Rory Burns and eventually got one slightly closer to him, forcing the left-hander to poke at it. Burns looked set but couldn't convert his start into something substantial as he was caught behind for 18. The 30-year-old was once again undone by a delivery pitched on a good length, on which he now averages below 19.

The visitors got the opening they needed and it was now Bumrah's turn to make an impact. Zak Crawley, who hasn't done much since his 267 against Pakistan in August 2020, was dismissed by Bumrah for just 7 almost in a similar way Burns got out to Siraj. The No. 3 batter unnecessarily threw his bat at a delivery pitched on the fifth-stump line and ended up nicking it to the wicketkeeper Rishabh Pant. Crawley now averages just 11.14 in seven Tests since 2021. That's when Root joined Sibley and England were still trailing by 49 runs. 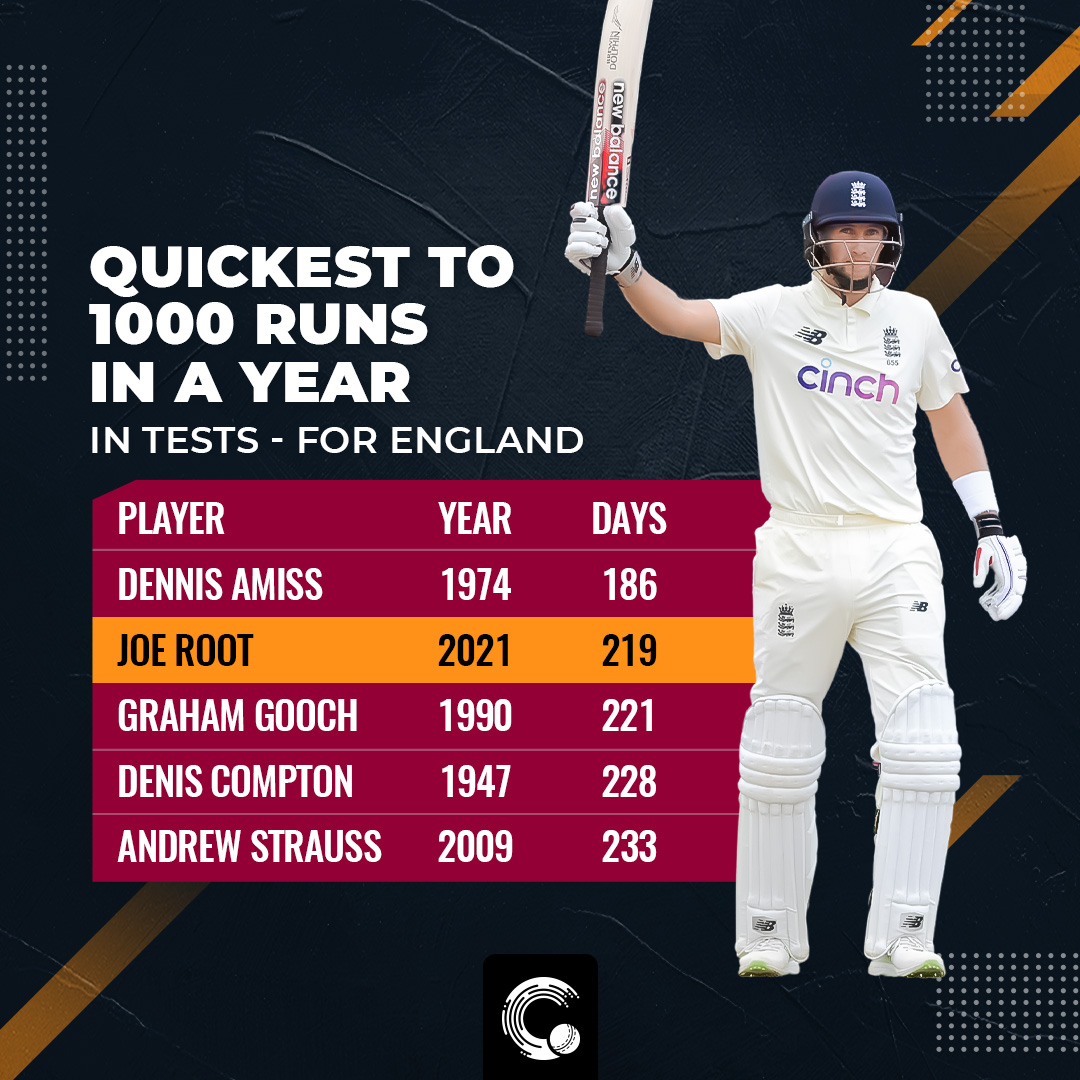 Apart from Sibley and Root, none of England's top-seven batsman has averaged more than 30 in the second innings since 2019 and they were up against one of the best in the business. The Indian bowlers have the best average (21.4) and strike rate (41) in the second innings since 2019. But the two batters got together to put an end to India's momentum by adding 89 runs for the third wicket. The pair also have an average of 52.1 while batting together in the second essay. While Sibley blocked and left everything that came his way, Root took the attack to the Indian bowlers and the first innings deficit was taken care of way before the end of the first session.

The England skipper did look a bit iffy at the start of his innings. A couple of inside edges missed the stumps, while an outside edge just fell short of Virat Kohli at first slip. But, that's when Root took control of the game and crafted Siraj for two boundaries in the 22nd over. The 30-year-old batted with a lot more fluency after that and pounced on anything full. There was hardly any assistance for Ravindra Jadeja, while Siraj and Shami leaked boundaries at regular intervals. In the process, Root also completed 1000 runs in 2021 - the second quickest in terms of days (219) for England. Dennis Amiss did it in 186 days in 1974.

Meanwhile, Sibley only scored 12 runs in the partnership but was playing his part to perfection before throwing his wicket away. The right-handed opener uncharacteristically tried to chase down a wide delivery, got an inside edge and Pant completed his third catch of the innings. Sibley scored 28 off 133 deliveries. Once the third wicket fell, Root slowed down a bit but Bairstow (50-ball 30) and Lawrence (32-ball 25) kept the runs flowing. Bairstow batted with a control percentage of 90 and was dismissed on a perfectly timed pull shot, hit straight into the hands of Ravindra Jadeja at deep square leg.

India surely under bowled Shardul Thakur in the first session and it was he who gave the visiting side two crucial breakthroughs in quick succession. The right-arm seamer first pinned Lawrence, who was looking dangerous, with a superb in-ducker and then knocked over Jos Buttler (17) just after tea. The wicketkeeper-batsman left an incoming delivery and ended up losing his off-stump. India kept picking wickets but were once again horrible with their reviews. They wasted two reviews on Root and one on Bairstow. 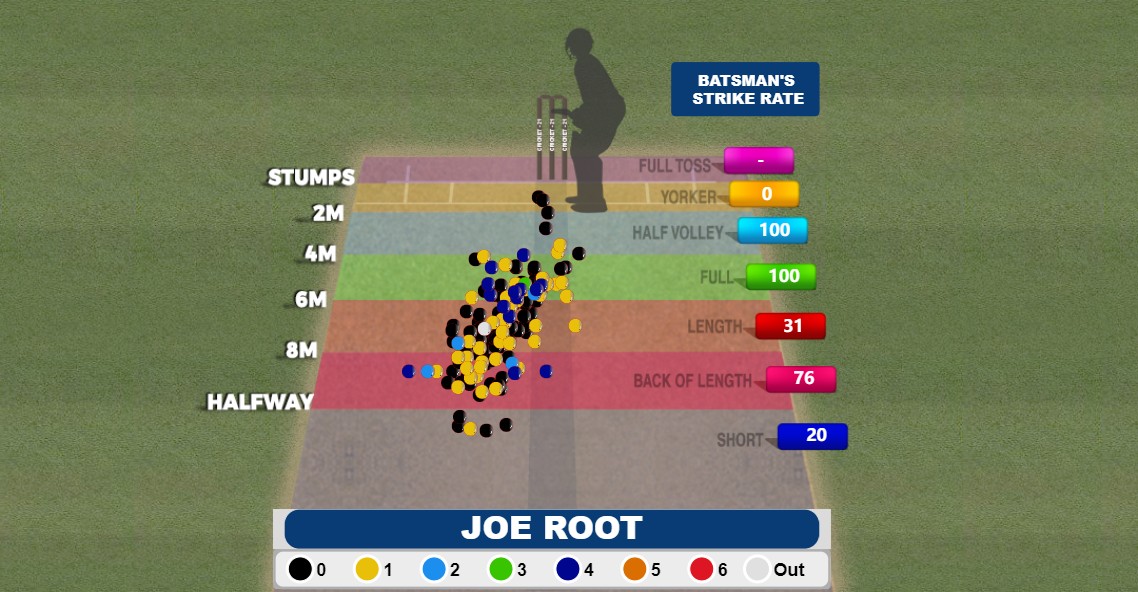 Having averaged just over 32 at home since 2018, Root had a point to prove. He was on 81 off 107 deliveries at one stage but took him 47 more deliveries to get to his century - his first in England since September 2018. The boundary to reach his hundred was the first Root hit down the ground throughout the Test. He also became the fourth England captain to score four Test hundreds in a calendar year. Root was particularly more aggressive against Shami (strike rate 96) and Siraj (68.1) and also smashed runs at a strike rate of 100 when the bowlers went full.

BUMRAH AT IT AGAIN

Root found a new ally in Curran (45-ball 32) and the two kept pushing England's lead towards 200. India straightaway took the new ball once available and it was Bumrah who got the all-important wicket of Root. After having Root caught behind, the ace paceman dismissed Curran and Stuart Broad (nought) on consecutive deliveries. While Curran was caught at mid-on, Broad was knocked over with an outstanding yorker.

Having taken four wickets in the first innings, Bumrah finished with match figures of 9/110. There was some pressure on Bumrah who struggled big time in the World Test Championship final against New Zealand but has now shut all his critics with his performance in this encounter. Apart from him, Siraj and Thakur picked up two wickets each, while Shami didn't have a great outing. The fast bowler from Bengal took one wicket and conceded runs at an economy of 4.5.