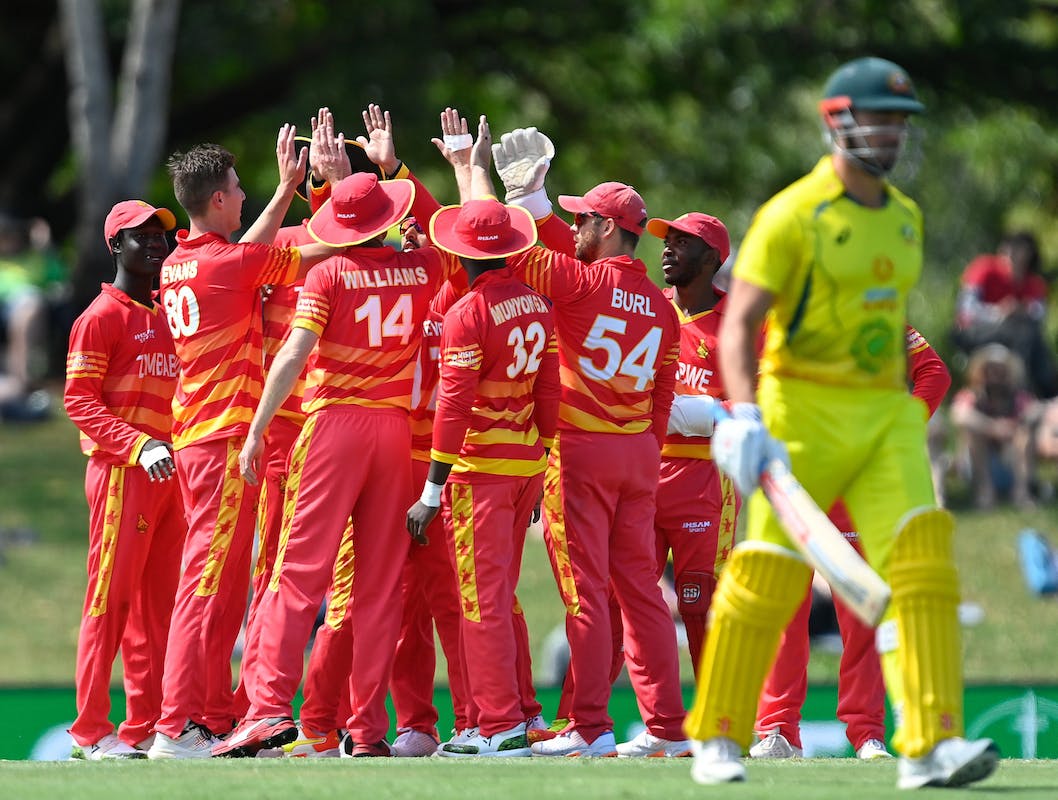 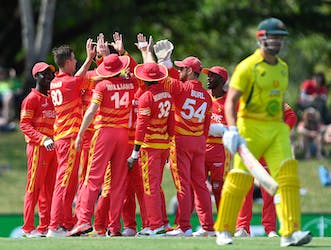 Zimbabwe stunned a nearly full-strength Australia by three wickets on Saturday to claim a historic victory in the third ODI in Townsville.

After leg-spinner Ryan Burl (5-10) played a starring role in dismissing the hosts for a lowly 141, Zimbabwe overcame a wobbly chase to beat the cricket powerhouse for the first time in Australia when they hauled in the target in the 39th over, triggering scenes of celebration.

It was a consolation victory for Zimbabwe to conclude the three-match series.

"We showed a whole lot of fight... it was a testament to the work the boys put in," said Zimbabwe skipper Regis Chakabva, who top-scored with a composed 37 not out.

But Australia quick Josh Hazlewood turned the game on its head with the wicket of Kaitano (19) in the ninth over, and soon after dismissed Wessly Madhevere and Sean Williams on consecutive deliveries.

A nervous Zimbabwe, seeking just their third victory against Australia from 32 ODIs, batted defensively and slumped to 77-5 after Murumani (35) fell to towering all-rounder Cameron Green.

Chakabva calmed the nerves and was joined by an inspired Burl, who hit a six off player-of-the-series Adam Zampa to get Zimbabwe within sight of a famous victory.

He fell with five runs needed but there was no late twist.

- 'Relentless with the ball' -

"You turn up to international sport and you can get beaten on any day, and we saw that today. They were relentless with the ball early on," Australia skipper Aaron Finch said.

In their first series in Australia since 2004, Zimbabwe struggled to be competitive in the opening two matches at the same venue and were routed for just 96 on Wednesday.

In a confidence boost, Chakabva won the toss for the first time in the series and his accurate attack claimed regular wickets against Australia's misfiring batting order.

After Zimbabwe's probing seamers tore through Australia's top-order, an inspired Burl claimed five wickets in a whirlwind 18 balls starting with the key scalp of Glenn Maxwell, who helped rebuild the innings with a half-century partnership alongside Warner.

The dangerous Maxwell holed out for 19 in the 27th over and Burl got on a roll in his career best performance, including dismissing Warner, who fell just short of his 19th ODI century.

Zimbabwe bowled out Australia for the first time in ODIs and the eventual triumph fuelled their bid to climb the ODI Super League ladder, which goes towards qualification for next year's 50-over World Cup in India.