Can DC get back on track against table-toppers MI? 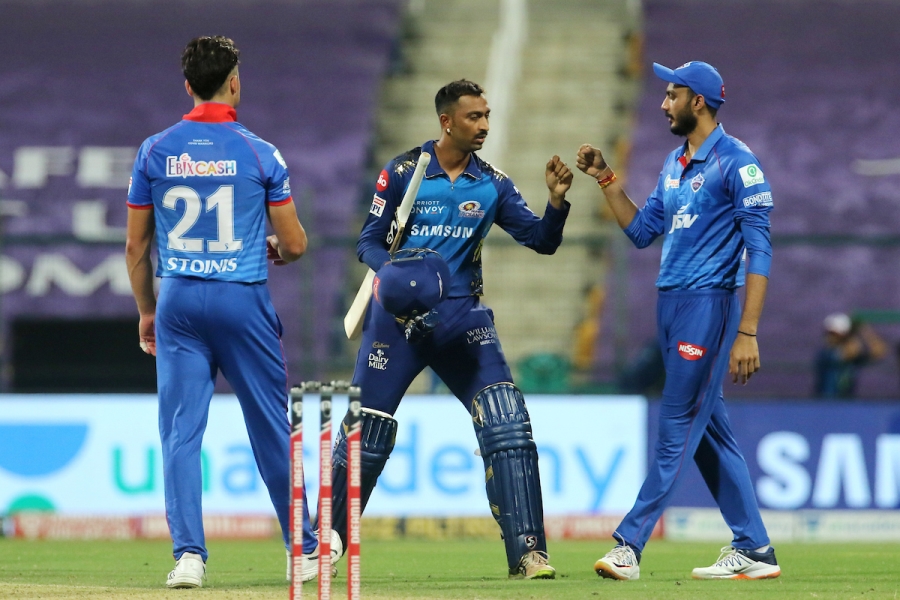 Can DC get back on track against table-toppers MI?

While MI have confirmed a spot in the playoffs, a win in this match will see DC qualify as well

Win any match during the Indian Premier League (IPL) league stage and you gain two points – that’s a given. But there are some games where you feel the points obtained are more. Simply put, some contests end up being way more important than the others.

The term ‘six-pointer’ has been regularly used to describe such matches in league football. Dictionary.com defines a ‘six-pointer’ as: ‘a football match between two teams in similar positions in the league table, considered as being worth six points as it not only gains the winning team three points but denies three points to the losing team’. In the IPL, though, you get two points for a win, so it becomes more of a ‘four-pointer’, but the detail still stands.

We’re into the business end of the 2020 IPL season and with six teams still in contention for three playoff spots, nearly every game feels like a ‘four-pointer’. When Delhi Capitals (DC) and Mumbai Indians (MI) take to the field at the Dubai International Cricket Stadium on Saturday (31 October 2020), though, it’s a four-pointer of a different kind.

For a large period of this IPL, Delhi and Mumbai were the most dominant teams and that showed with their respective positions on the league table. In Mumbai’s case, it has also seen them qualify for the playoffs, being the only team to do so until now. Delhi, on the other hand, have stumbled after losing three successive matches.

You could say that this is a ‘four-pointer’ with regards to the battle to finish in the top two – a DC win here and both teams will be level on points, but a MI win will see the four-time IPL champions build a four-point lead while confirming a place in Qualifier 1. But for the Capitals, after their recent run of form, the first priority will be to finish among the playoff spots.

Having said that, finishing in the top two is pivotal. There’s obviously the fact that you need to win one game and not two to reach the final if you do so and that, unsurprisingly, has proven to be incredibly useful in the past. Since the current playoff system was introduced, eight out of the nine champions have been teams that have finished in the top couple of spots in the league. So, this is a highly important game from that viewpoint despite DC still needing to confirm qualification to the final four.

DC's trouble with their third pacer

After nine matches, DC had 14 points on the board. Three games later, their points tally hasn’t changed. While they have a few issues, one that needs urgent addressing is their third pacer. While Kagiso Rabada and Anrich Nortje have been excellent, the overs shared between an Indian pacer and Marcus Stoinis have been extremely costly for them time and again this season. 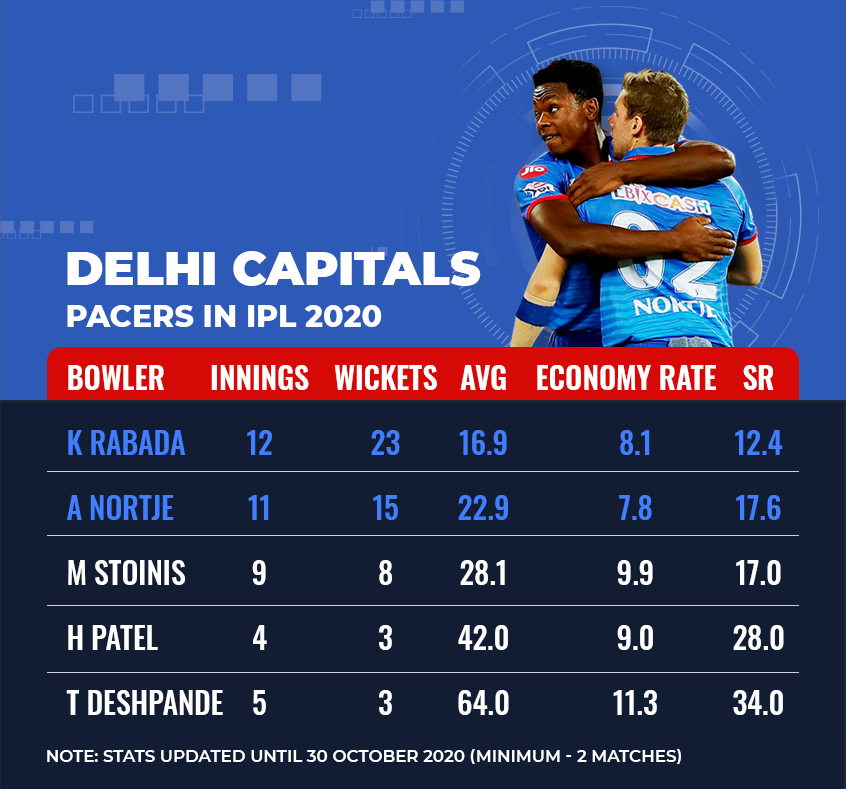 In the five last matches, DC have used Tushar Deshpande in that role, but he has been expensive, conceding 9+ runs per over in every game. In the last three games, especially, his performances haven’t been up to the mark – no wickets and an economy rate of 12.88 during this period. So, you’d think that the Delhi-based franchise might make a change here.

With the injury to Ishant Sharma, the options that remain are Harshal Patel, Mohit Sharma and Avesh Khan. While Harshal has played four matches thus far this season, Mohit and Avesh were dropped after poor performances in one game each. Harshal is perhaps the favourite to get a game now, with his batting perhaps also a factor.

Something that has been very noticeable this season has been DC’s hesitance to bowl slow left-arm orthodox-spinner Axar Patel against left-handed batsmen – this is of course not uncommon in T20 cricket, but with MI likely to have as many as four left-handers in their top seven, this is an interesting subplot. In IPL 2020, Axar has bowled only 18.98% of his deliveries to southpaws so don’t be surprised if Praveen Dubey or Lalit Yadav make their IPL debut either as the second spinner behind Ravichandran Ashwin or as an extra spin option instead of a third frontline pacer.

On the batting front, the striking form of Rishabh Pant is a major concern for the Capitals. In IPL 2020, the wicketkeeper-batsman has a strike rate of 115 which is his lowest in any season so far. In the three seasons before this, his strike rate was above 160 each time and DC desperately need him to get back to his best immediately. Skipper Shreyas Iyer also needs to step up a few gears – outside Sharjah, he has a strike rate of 113.3 in nine innings this season which is well below-par.

Defending champions MI are looking like the team to beat once again. Something that has been consistent with regards to the franchise over the last decade is the fact that they have such a well-built all-round team. They possess a solid top-order, backed by two of the best big-hitters in world cricket right now in Kieron Pollard and Hardik Pandya. With the ball, Jasprit Bumrah and two overseas pacers make the attack tick while spinners Rahul Chahar and Krunal Pandya have been very reliable.

Rohit Sharma’s injury hasn’t affected the side from Mumbai much thus far. Quinton de Kock has been as good as you’d expect him to be while Ishan Kishan has notched up 130 runs in three innings as an opener. But it’s number three Suryakumar Yadav who is the talk of the town after his match-winning performance against Royal Challengers Bangalore (RCB) earlier in the week. The 30-year-old shrugged off the disappointment of being overlooked for India’s tour of Australia as he took the RCB bowling apart in Abu Dhabi.

Since joining MI in 2018, Suryakumar has scored more runs (1298) and notched up more 50+ scores (9) for the franchise than any other player. This speaks volumes about his consistency. In IPL 2020, he has been comfortable against pace and spin. While against the quicker bowlers, he has an average of 44 and a strike rate of 161.8, the corresponding numbers against spin have been 71 and 146.4 respectively.

In the pitch map below, we can see that he has struggled a little against back-of-a-length deliveries by pacers this season. But there is little margin for error as if the delivery is slightly shorter, then Suryakumar is likely to take you to the cleaners. In Rabada and Nortje, Delhi have two bowlers who can look to bowl back-of-a-length at MI’s number three, but they need to be bang on the money. 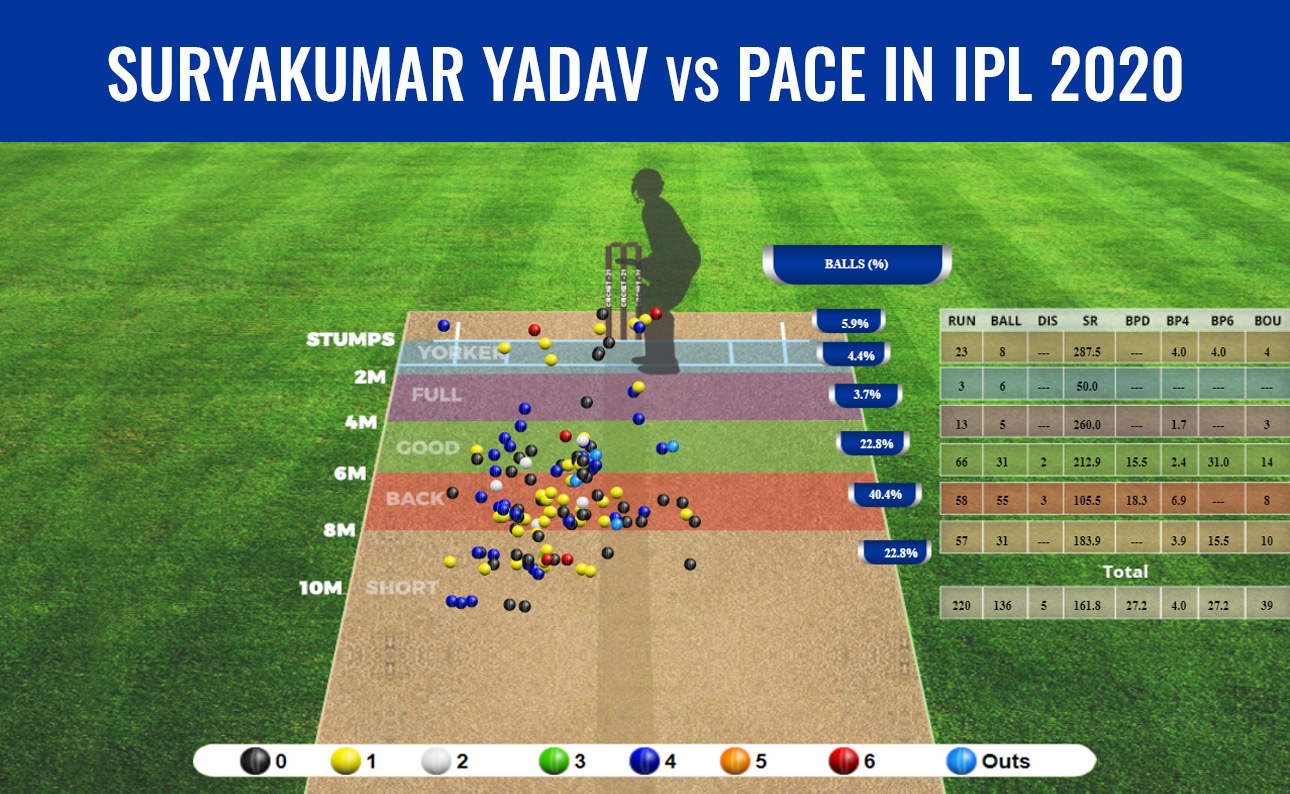 Both teams in this match are likely to have four left-handed batsmen among their top seven, but unlike DC and Axar, MI have shown faith in Krunal Pandya when opposition’s left-handers are at the crease. Krunal’s performances with the ball against southpaws, though, have been less than impressive this season – just one wicket in 77 deliveries at an economy rate of 9.8. How spinners from either side tackle the other team's left-handed heavy batting line-ups could have a huge say in the outcome of this match.