Can Royals bounce back and stop Capitals’ juggernaut? 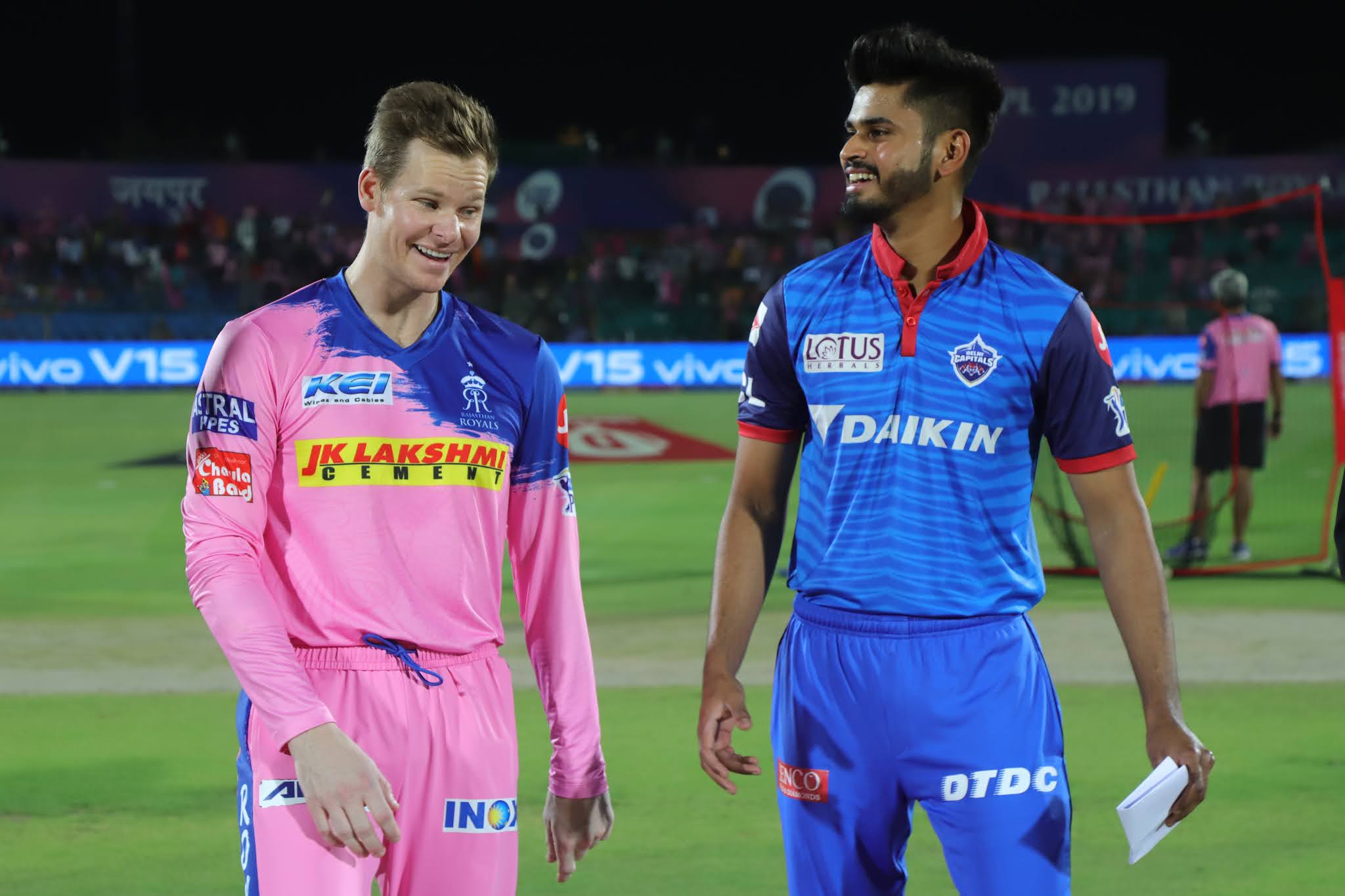 Can Royals bounce back and stop Capitals’ juggernaut?

Delhi Capitals have won four out of their five matches this season so far, while Rajasthan Royals have lost their previous three games

Rajasthan Royals’ season began so spectacularly, with two wins from as many matches. At the time, they looked like the side to beat. But over the next three games, they’ve fallen behind the eight-ball with three successive losses. More than the defeats itself, the manner in which they’ve lost those matches would be disappointing as none of the three contests were even close.

On the other hand, after years of substandard performances, Delhi Capitals now seem to be the team to beat in this season’s Indian Premier League (IPL). After six years of failing to make it to the playoffs, Delhi came within one game of the final last season, and they seem to be building well from that platform. They’ve started this year’s campaign with four wins from five matches.

One important aspect to address while analysing Rajasthan’s performances thus far this season is the fact that their results also have had a lot to do with venues. Their first two matches were at the Sharjah Cricket Stadium, where they looked like a formidable side. But in Dubai and Abu Dhabi since, their showings were well below-par.

One of their biggest problems has been the fact that they’ve tried to be too aggressive in their approach when it comes to batting. Their false shot percentage currently this season is at 29.1 which is easily the highest in the league. The team that are second – Kolkata Knight Riders and Royal Challengers Bangalore – are a fair bit below at 24%. In fact, if you see the graph below, you will notice that the Royals are clearly an outlier in this aspect. 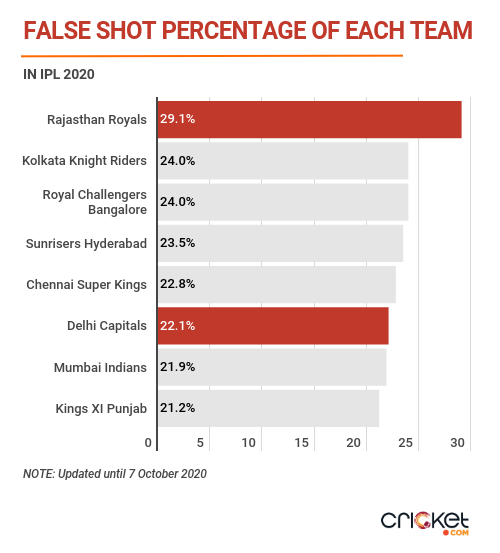 The fact that their upcoming match against Delhi is taking place in Sharjah should give Rajasthan a boost, considering their results at this venue. But there is room for apprehension as well when you examine their victory against Kings XI Punjab in Sharjah. Yes, they set a record for the highest successful run-chase in IPL history, but the circumstances in which it came about gives you something to ponder upon.

For most of that game, Rajasthan looked down and out, before Rahul Tewatia hit Sheldon Cottrell for five sixes in the 18th over to turn the match on its head. It was a miraculous victory, an unforgettable one at that, which obviously went on to overshadow the fact that the Royals recorded a false shot percentage of 33.3. While chasing a huge target, it was understandable that they needed to attack, but they should surely be more controlled with their aggression, even if they’re playing in Sharjah.

On Tuesday (October 6), those issues were there to be seen once again as the Royals were bowled out for 136 against the Mumbai Indians. The match was pretty much done during their Powerplay itself as they lost three wickets for 12 while chasing a daunting target of 194. In this innings, they recorded a false shot percentage of 34.8 which is the highest in a team’s innings this season.

In this match, the Royals have more cause for concern as they will be up against possibly the best bowling line-up in the tournament. The Capitals have the best economy rate (8), best bowling average (22.1) and strike rate (16.7) thus far in this season’s IPL.

The star has, once again, been Kagiso Rabada. Last season, the South Africa pacer missed out on the Purple Cap by just one wicket to former international team-mate Imran Tahir, who had played five games more. This season, from his first five matches, Rabada has taken 12 wickets at a strike rate of 10. It’s the rate at which he takes wickets that is absolutely phenomenal.

In the last two seasons of the IPL, Rabada has not only taken the most wickets (37) by a distance, but he has the best average (14) and strike rate (10.9) among bowlers with 10+ wickets during the period. Having a bowler who is averaging more than two wickets a match across 17 matches and two seasons is an incredible luxury to have. And Delhi have benefitted no end from Rabada’s excellence. 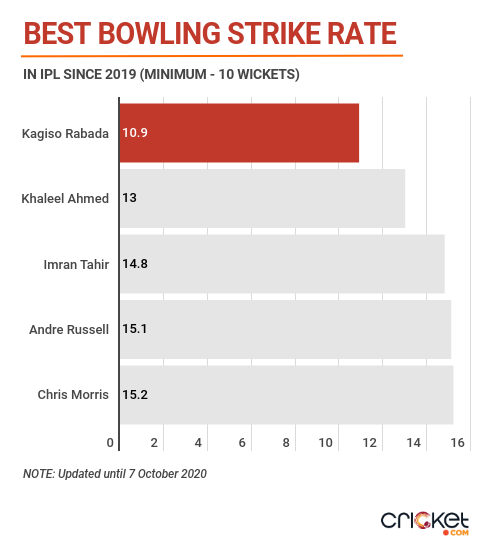 Rabada has been well supported by international bowling partner Anrich Nortje and the spin contingent as well. With Amit Mishra ruled out of the IPL due to a finger injury, in came Axar Patel for the match against the Royal Challengers and ended up producing a Player of the Match performance. This demonstrates what a magnificent all-round unit the Capitals have become.

This game will also pit two young wicketkeeper-batsmen against each other. While KL Rahul seems to have sealed a spot as India’s gloveman in limited-overs cricket for now, there is a good chance he could play as a specialist batsman if Rishabh Pant and/or Sanju Samson step up and can claim a spot in the Indian team.

For Samson, for years, consistency has been an issue and it has been a problem this season too. After taking the tournament by storm with two stunning half-centuries, he has scored just 12 runs in the three innings that followed. The 25-year-old found the going hard in Dubai and Abu Dhabi, so a return to Sharjah might just bring out the best in him again.

On the other hand, Pant has had a very different kind of tournament so far. He has got starts in every innings but is yet to make a huge score. If he gets to spend enough time in the middle at a venue like Sharjah, that big innings might just be around the corner.

GOPAL WITH THE NEW BALL, AGAIN?

In Rajasthan’s last couple of matches, they’ve used Shreyas Gopal during the Powerplay. It’ll be interesting to see if they stick with the same strategy for this match. While the Sharjah Cricket Stadium might not be ideal for this tactic, Gopal has an extraordinary record against Delhi’s top three of Prithvi Shaw, Shikhar Dhawan and Shreyas Iyer – five dismissals in 40 deliveries against the trio.

Whether it be with the ball or with the bat, it’ll be interesting to see how the Royals approach this match as they attempt to bounce back after three consecutive defeats. For Delhi, it’s surely just about keeping their momentum going by not making any drastic changes to what has brought them positive results until now. Despite both teams coming into this game in contrasting form, in Sharjah, you wouldn’t expect anything less than a high-scoring thriller.