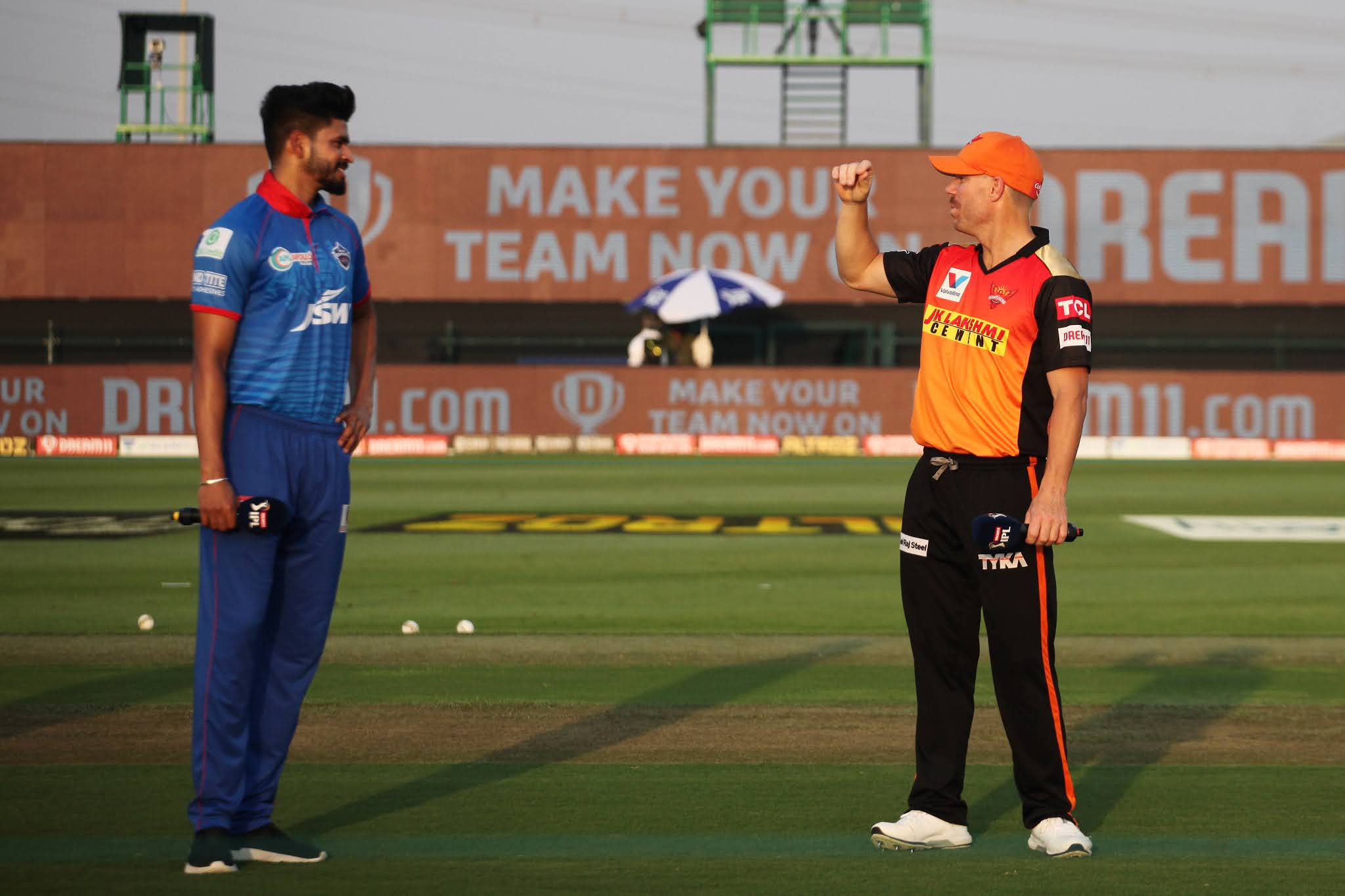 While DC have an opportunity to go to the summit of the table, it’s a must-win game for SRH on Tuesday (27 October 2020)

This is the time of the Indian Premier League (IPL) season when mathematicians and statisticians are in demand as everyone attempts to work out permutations and combinations with regards to the playoff chances for each team. With Sunrisers Hyderabad (SRH) and Delhi Capitals (DC), anyone would tell you though that one team’s odds of finishing in the top four are very different to the other.

Criclytics, cricket.com’s predictive cricket algorithm, currently forecasts that the Capitals have a 99% chance of making it to the playoffs, while the Sunrisers are at 4%. Hence, going into this match at the Dubai International Cricket Stadium, while one team will look to confirm their qualification to the next round, it’s a matter of staying alive in the race for the other.

For SRH, the above-mentioned percentage could have been a fair deal higher and perhaps you can say that it should have. On Saturday (24 October 2020), they looked almost certain to secure victory against Kings XI Punjab (KXIP) – at one point, requiring less than a run-a-ball with all 10 wickets in hand – but an extraordinary batting collapse saw the team from Hyderabad fall to their seventh defeat of the season which makes qualifying for the playoffs a near-improbable task now.

While Manish Pandey and Vijay Shankar put on a brilliant partnership to guide SRH to victory against Rajasthan Royals (RR) last week, the Hyderabad-based franchise’s middle-order has been an area of concern for a while now and that came to the fore against KXIP. In the last two seasons of the IPL, SRH have the lowest batting average (22.8) for batsmen batting between positions 3-7. When we consider batting strike rate and balls per dismissal, they are second from bottom for those batting spots during the same period. 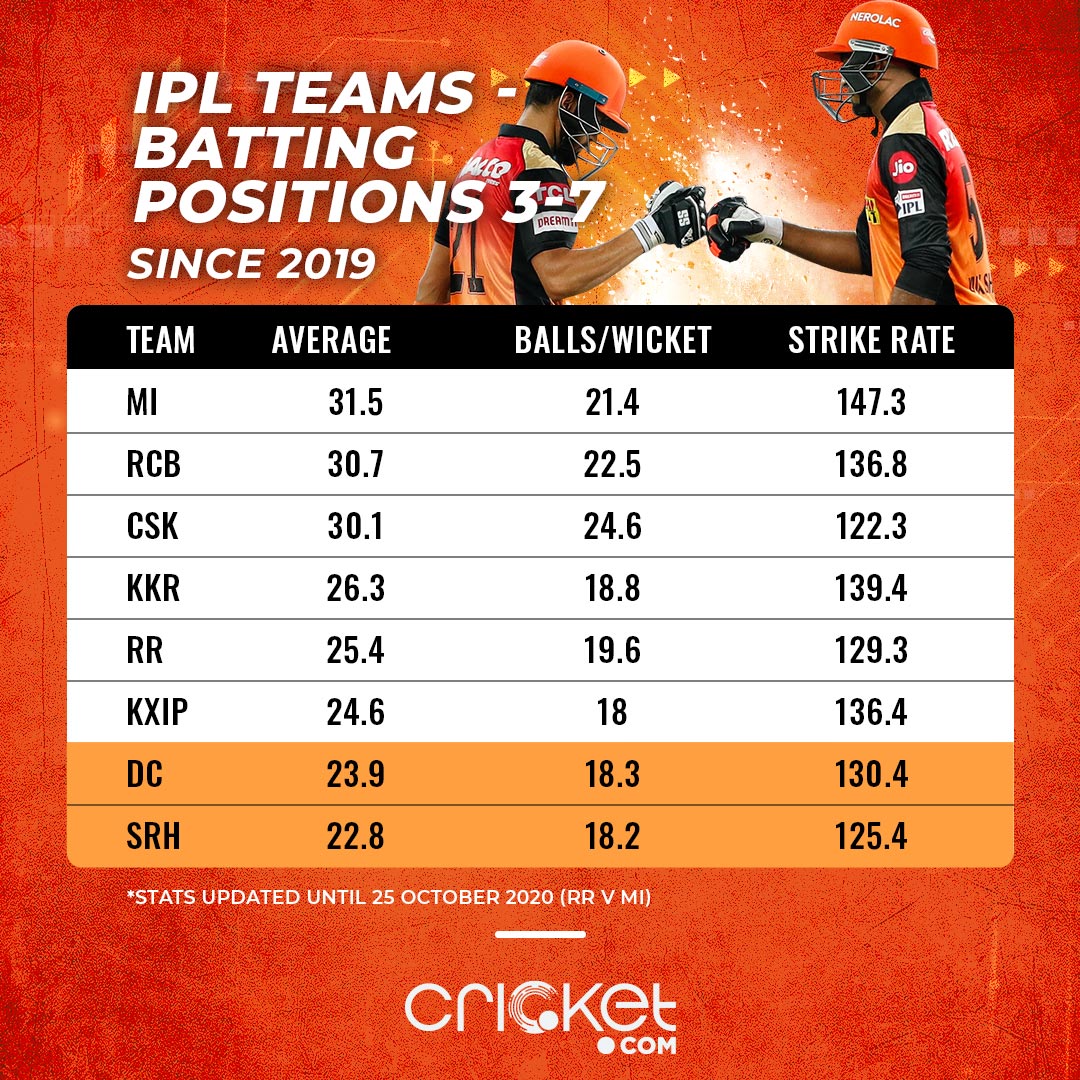 That explains why despite having a world-class opening pair in David Warner and Jonny Bairstow, they are not able to get the results that they would’ve liked. In fact, when it comes to opening partnerships, SRH are second-best with regards to average (41.9) and strike rate (140.8) since IPL 2019. Quite the contrast, you’d say!

Kane Williamson was doing a good job at number four, but an injury saw him drop out of the playing eleven a couple of matches ago. But even if he is fit, will SRH bring him back into the team? After all, his replacement Jason Holder has done well in the last couple of games, picking up five wickets. The West Indian Test captain, with his height, also adds variety to an otherwise alike pace attack.

At this season’s auction, SRH bought Virat Singh for ₹1.9 crore but the 22-year-old surprisingly hasn’t played a game yet. During the 2019/20 Syed Mushtaq Ali Trophy (SMAT), Virat was one of the top run-scorers during the tournament, with an average of 57.17 and a strike rate of 142.3. He’s definitely a player SRH should consider as they look to shore up their middle-order.

A MINI-SLUMP FOR DC

It would be an understatement to say that the Capitals find themselves in a much better position than the Sunrisers, but the side from Delhi have had their hiccups recently. They come into this contest on the back of two consecutive defeats, and if not for Royal Challengers Bangalore and Mumbai Indians slipping up on Sunday (25 October 2020), they would’ve been outside the top two right now. While DC’s berth in the playoffs is almost guaranteed, they’d want to finish in either first or second place at the end of the league stage – that extra chance you get in the playoffs when you do so is so pivotal.

Prithvi Shaw’s slump in form saw him replaced by Ajinkya Rahane for the match against Kolkata Knight Riders (KKR), but India’s Test vice-captain lasted just one delivery. While the aforementioned innings was Rahane’s first as an opener for Delhi, he has featured in four matches so far this season and managed just 25 runs. It’s unlikely that the former RR batsman will be dropped, but there are other options that Delhi can consider.

Marcus Stoinis began the season superbly, but his performances with the bat in recent matches haven’t been up to the mark. In his last five innings, the Australian allrounder has failed to score above 25 which is a bit of a concern. In the 2019/20 Big Bash League, he was the highest run-scorer and he did so while opening the batting. Hence, a move up the order for Stoinis could be beneficial for the team as well as the player.

On the bowling front, while Kagiso Rabada and Anrich Nortje have been brilliant, the third pacer has leaked runs through the season. In the last four matches, it has been Tushar Deshpande who has shouldered that responsibility, but he has conceded runs at an economy rate of 11.2. This might lead to DC bringing Harshal Patel back into the playing eleven. While the Sanand-born cricketer is primarily a bowler, he was one of the top run-getters in SMAT 2019/20 as an opener – 374 runs at an average of 31.17 and a strike rate of 165.5. While Harshal playing as an opening batsman in the IPL might sound preposterous and something Delhi are unlikely to try at this stage of the tournament, it’s worth thinking about, especially if it leads to them having an extra bowling option. 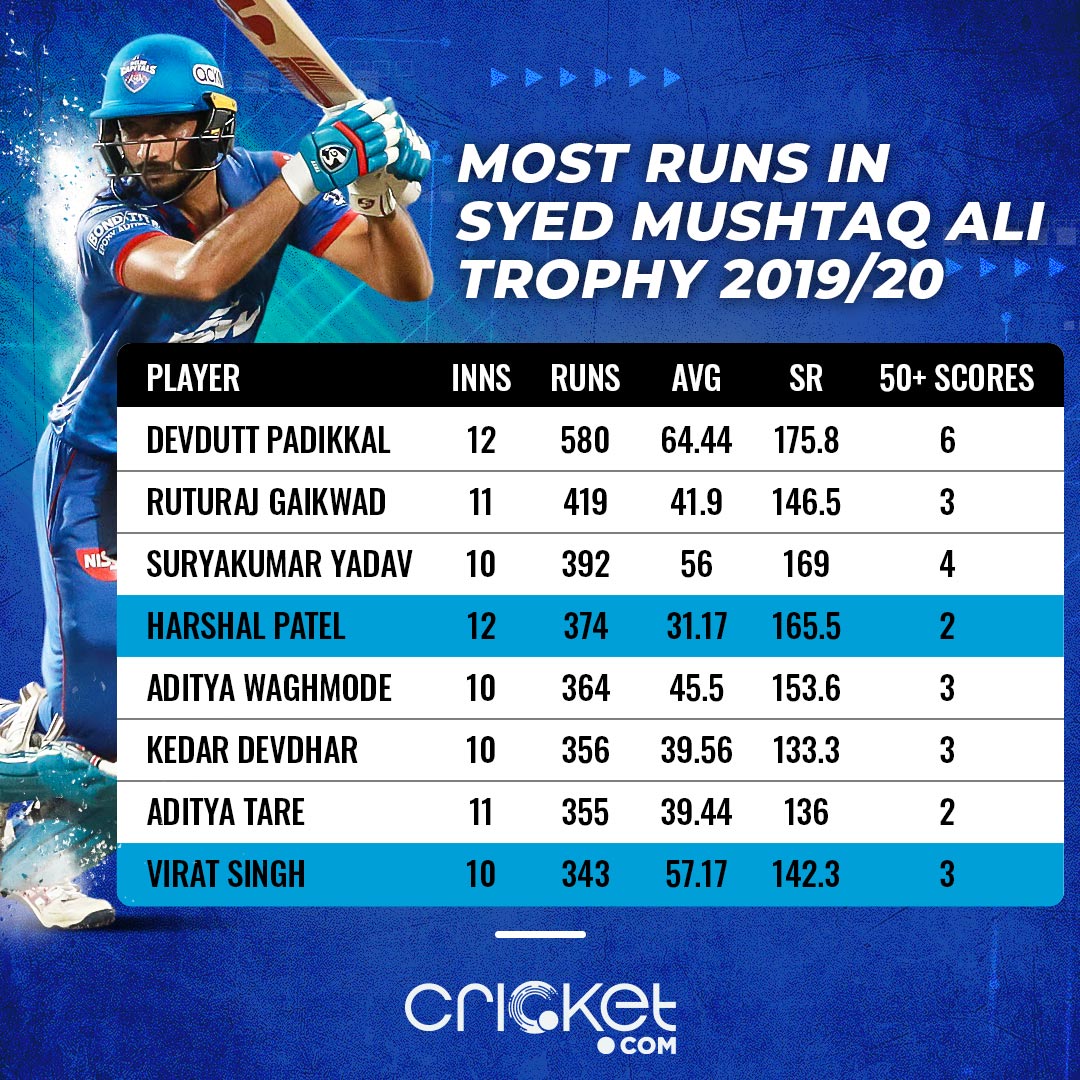 The Capitals will also be slightly worried by Rishabh Pant’s batting form right now. While he missed a few games due to injury, he hasn’t managed to score a fifty this season. But more than that, it’s his batting strike rate of 117.3 which will be concerning. In each of the previous three seasons, he scored at a rate of 160+ runs per 100 deliveries and he is expected to be the attacking force in the Delhi batting line-up. On Saturday (24 October 2020) against Kolkata Knight Riders, his knock of 27 off 33 balls while chasing a target of 195 was far from ideal and DC need Pant to bring his A-game as they enter the business end of the tournament.