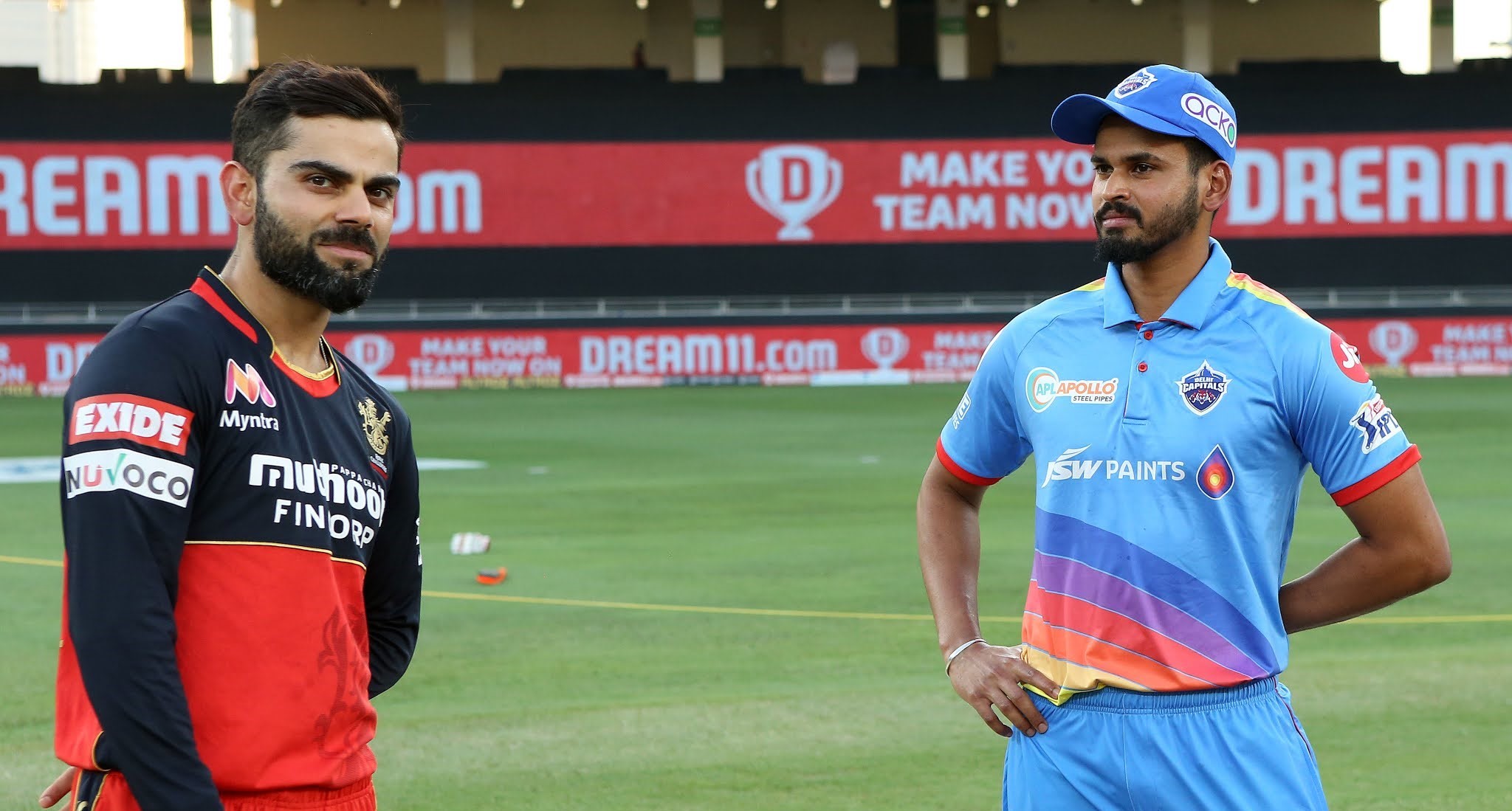 10 days ago, if you were asked which Indian Premier League (IPL) team’s shoes you’d like to be in, two of the top answers would have surely been Delhi Capitals (DC) and Royal Challengers Bangalore (RCB). But as both teams have found out over the last week and a half, you can’t take anything for guaranteed in this remarkable tournament.

FROM SUBLIMITY TO UNCERTAINTY

While both looked certain to qualify for the playoffs not so long ago, depending on results elsewhere, this could end up being a knockout clash. There is, of course, the possibility that both teams might still make it to the playoffs, but the circumstances that have brought DC and RCB to this situation, where there’s a possibility one of them might not finish in the top four, have been incredible. Coming into this game, the Capitals are on a four-match losing streak, while the Royal Challengers have lost three matches in a row.

In the IPL, players often shuffle between teams, but yet watching these two sides play recently, you’d think that the weight of past failures of the respective franchises is constantly staring down on them. On Saturday (31 October 2020), if either team won their match, they’d confirm a place in the final four, but neither managed to do so. But what was more worrisome was the manner of the defeats.

In a congested IPL league table, it is certain at this stage that net run-rate (NRR) will have a huge bearing on the final positions. Hence, both DC and RCB could have done with losses if the margins weren’t huge and then relied on their previously positive NRRs to progress irrespective of this match’s result. But both teams were hammered on Saturday and are now floating dangerously with regards to their respective NRRs.

The Capitals and the Royal Challengers possess some renowned batsmen in their ranks, yet this is the aspect of the game that seems to be a drawback for both this season and that was there to be seen during their losses against Mumbai Indians (MI) and Sunrisers Hyderabad (SRH) respectively.

The shortcomings for RCB have been in the middle overs where their batsmen have simply failed to gain momentum time and again through the season. Between overs 7-15, the team from Bengaluru have been scoring at a run-rate of 6.9, which is the lowest by a fair margin in IPL 2020. 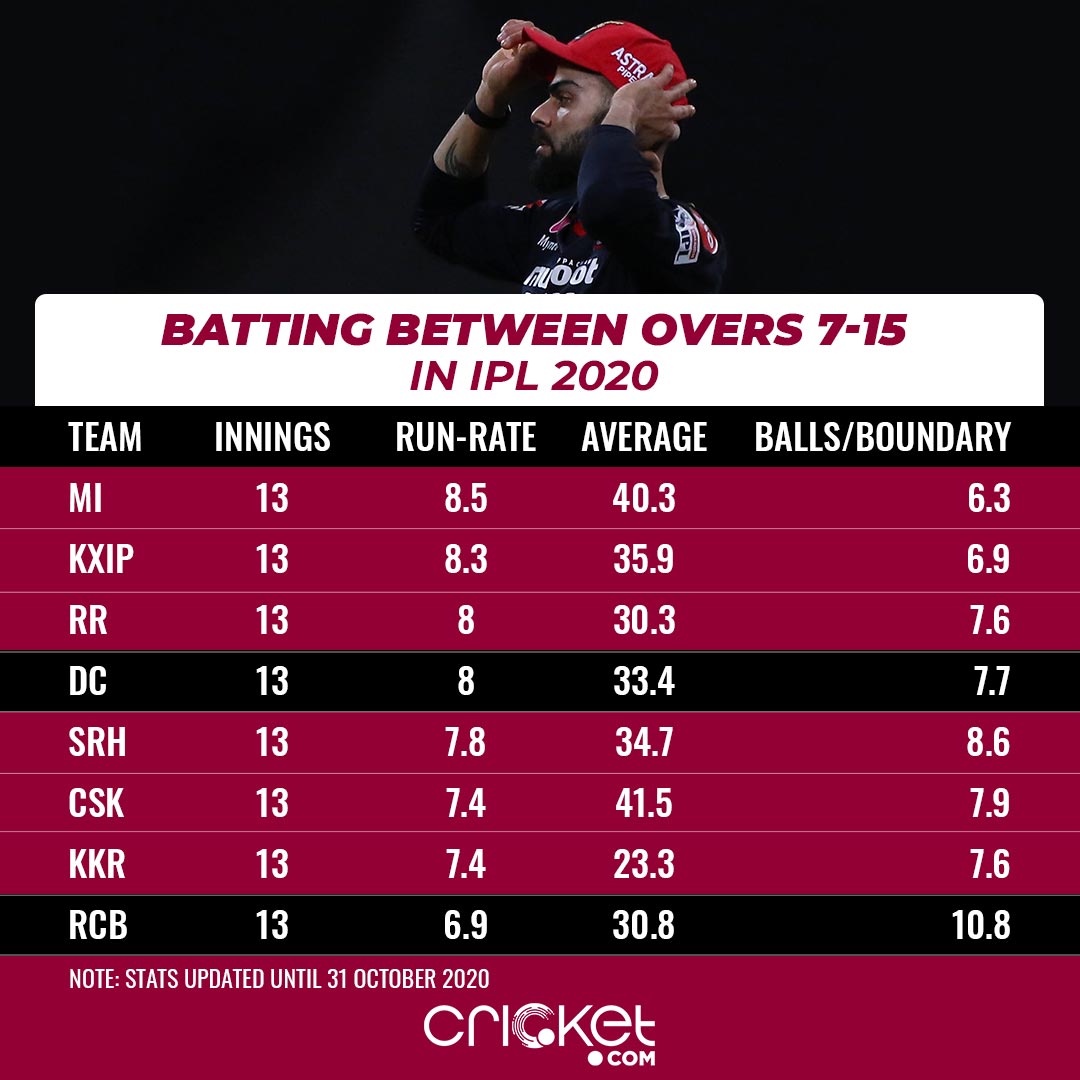 A huge reason for the below-par scoring rate in the middle portion of the innings has been because of their inability to hit boundaries. As you can see in the image above, RCB have managed to score a boundary off every 10.8 boundaries between overs 7-15 in IPL 2020 which is far worse than every other team.

In T20 cricket, while there are times when a cautious approach makes sense, more times than not, you need to be aggressive and attempt to find the boundary through the innings and not just during the Powerplay or death overs. And on that front, RCB have fared poorly this season thus far.

On the other hand, while DC have performed reasonably well during the middle overs, it’s at the start of the innings and the death overs where they’ve fallen short.

The Delhi-based franchise have lost a wicket in the first over on seven occasions this season, which equates to 53.85% of all innings. From thereon, they have had to often play catch-up and that is not easy to do, especially in a 20-over per side game.

In the last eight games, Delhi’s opening partnership has managed just 43 runs, getting into double digits just twice. With such poor starts, it’s no surprise to see that results haven’t been going their way lately. 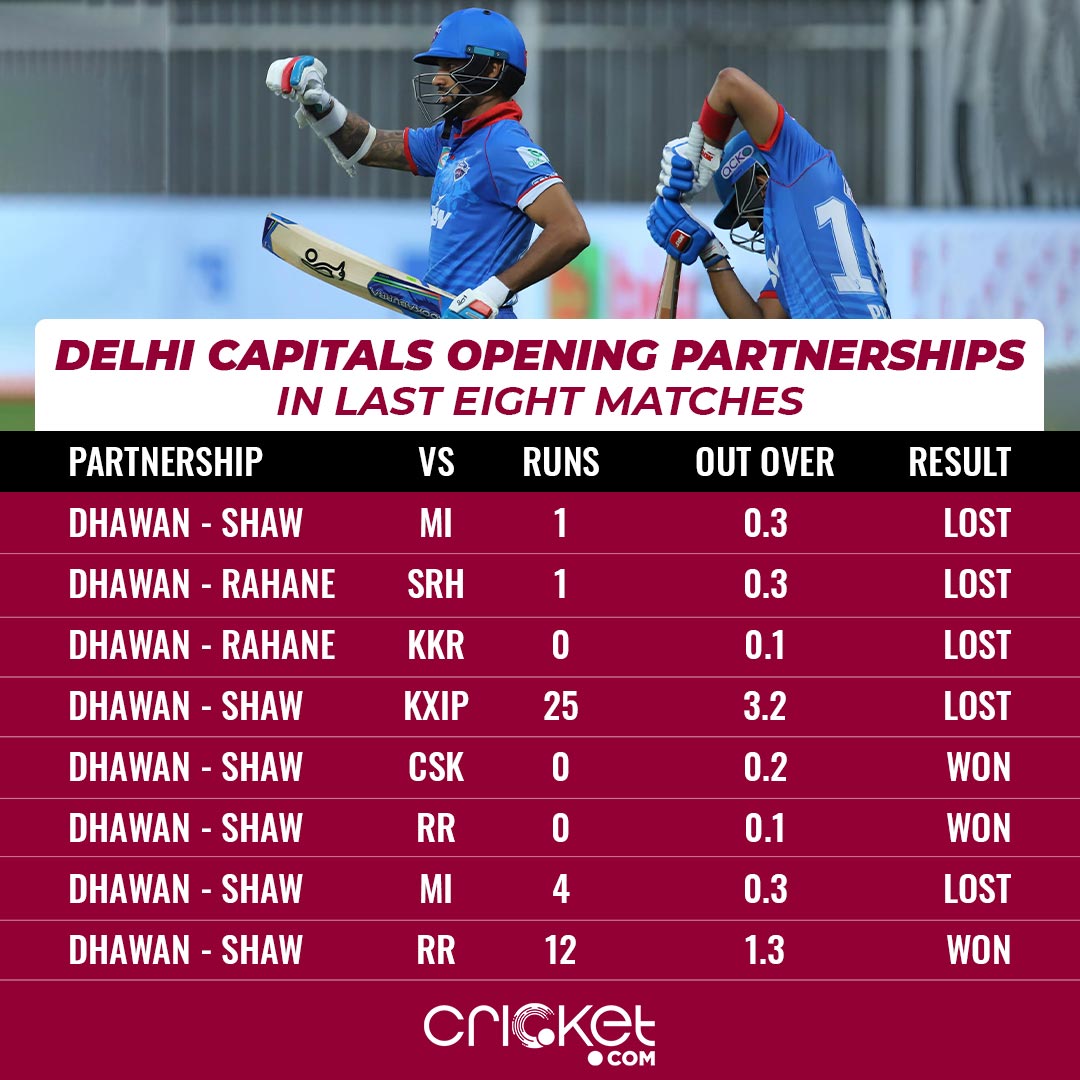 Another issue for DC has been at the other end of the innings. Take out matches in Sharjah and they have the lowest run-rate (9) between overs 16-20 this season. While Marcus Stoinis began brilliantly with the bat, his form has tailed off in recent games. In his first five innings in IPL 2020, the Australia allrounder had a batting average of 41 and a strike rate of 198.4, while in the eight innings since, those numbers have been 14.5 and 120.8 respectively.

Rishabh Pant being far from his best has also dented DC’s campaign. Due to the loss of early wickets, the India wicketkeeper-batsman has been coming into bat early on and hasn’t spent much time during the death overs either. 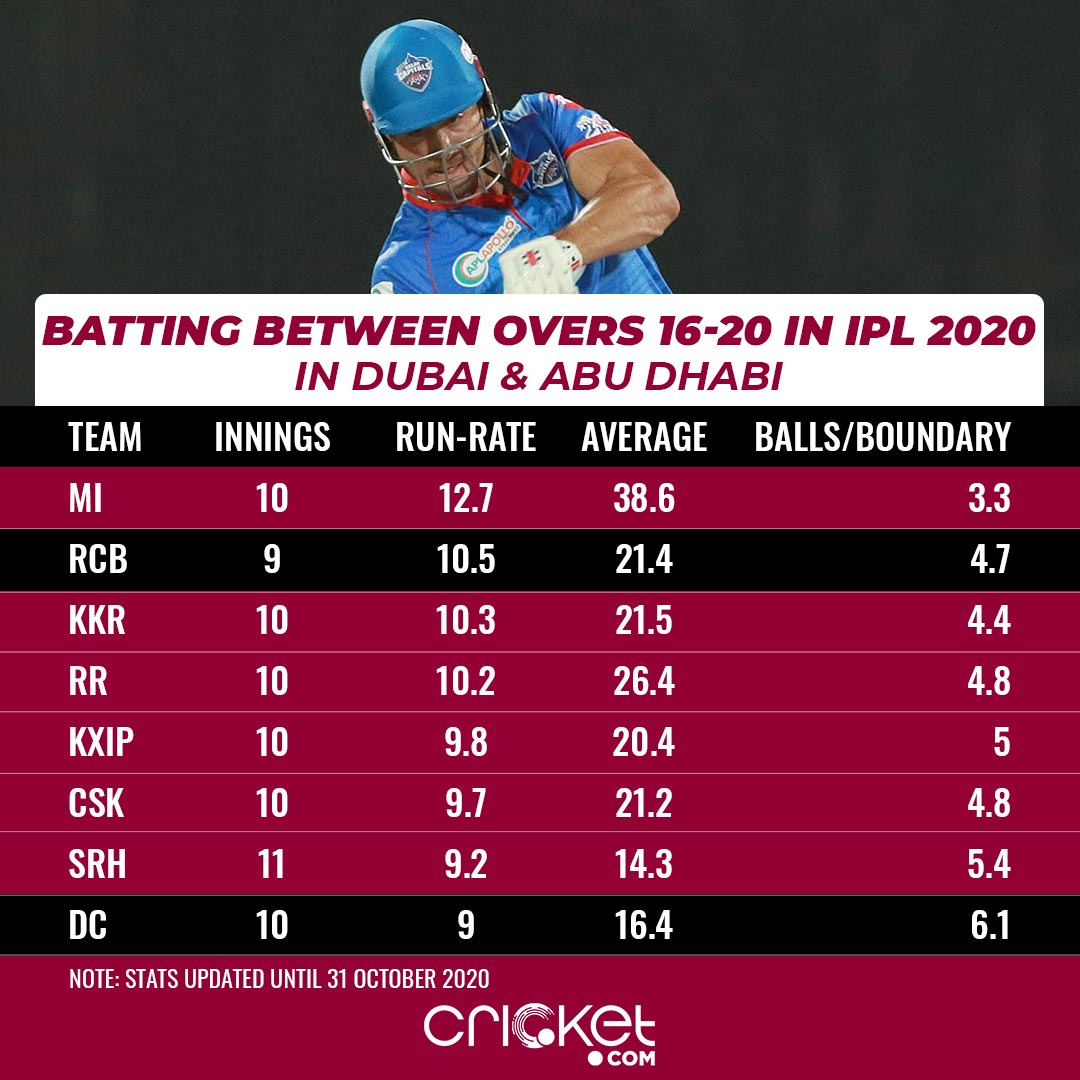 With Prithvi Shaw in the midst of a poor run of form and Ajinkya Rahane not making the opening spot his own either, DC could be tempted to push Stoinis up the batting order as Shikhar Dhawan’s opening partner. After all, Stoinis was magnificent in the 2019/20 Big Bash League and ended the tournament as its top run-getter while playing as an opener.

TOP TWO SPOT ON THE LINE

While there is a chance that one of the two teams might fail to reach the playoffs, which will be quite an embarrassment for either after their starts to the season, the side that wins this contest will finish second. As we’ve seen so often in the past, making it to Qualifier 1 is so crucial and either DC or RCB – despite their dreadful run of results lately – will face MI in that match on Thursday (5 November 2020).

Here's how RCB or DC can qualify even with a loss in this match. 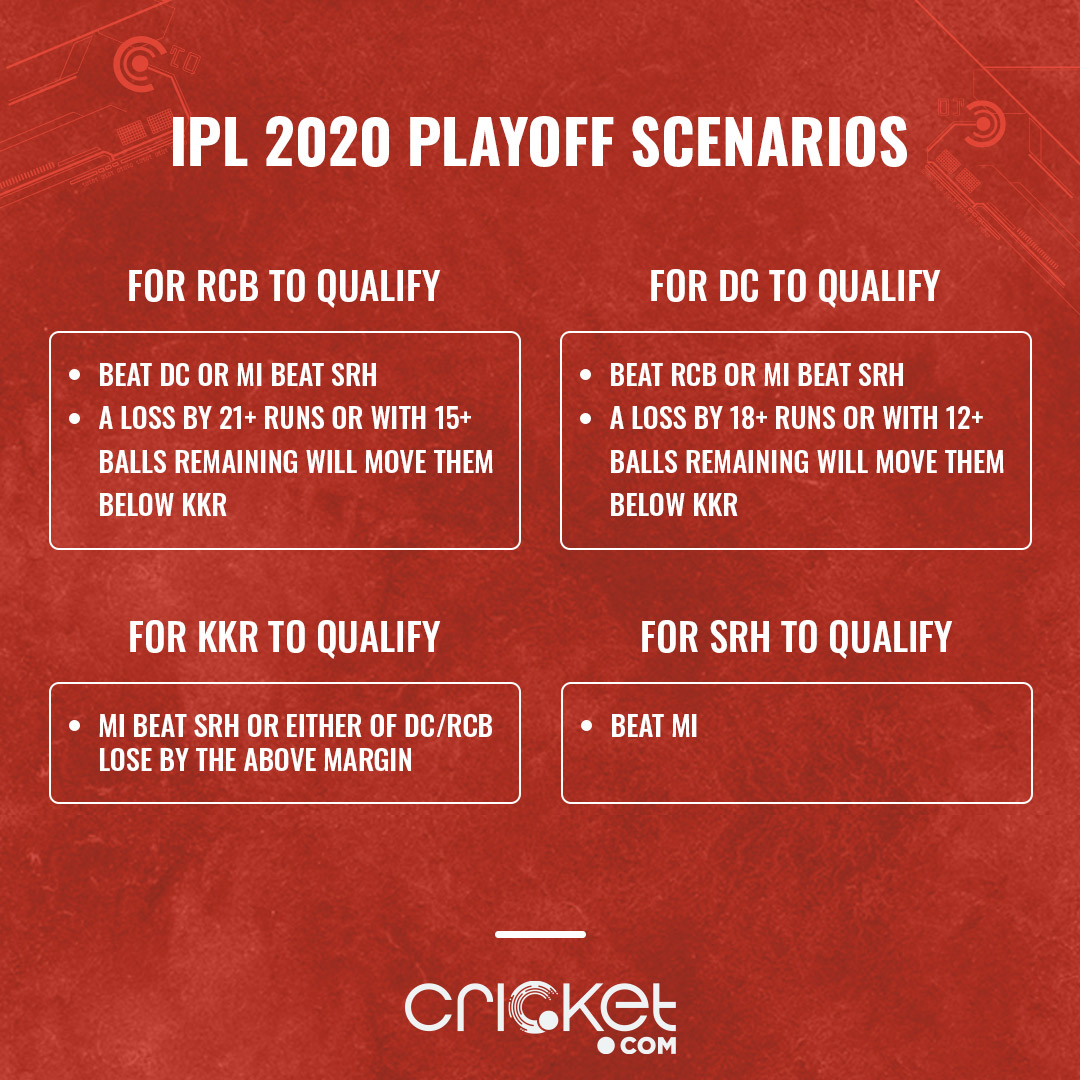