The Caribbean is a hothouse of talent, always has been. Yet if, this time last year, if you had said the West Indies was a good ODI team you’d have been dismissed as a crank.

And yet, here we are: On the threshold of CWC 2019, and any discussion of favourites will, sooner or later, find someone saying, um, but you know, the Windies…

The problem was not lack of talent but a board that ran roughshod over player aspirations, forcing the best and brightest to opt for franchise cricket. A new board, a changed mindset, and suddenly the Windies are back. Young talent like Evin Lewis, Shai Hope, Shimron Hetmyer and Fabien Allen, all playing their maiden World Cup alongside veterans of the order of Chris Gayle, one of six players from their 2015 squad to be retained.

Since the 2015 World Cup, West Indies has a win percentage of 30.15, the lowest among all participating teams. In the run-up to the Cup, though, Windies have won 4 out of their 9 games, a slightly better record.

An astonishing fact: Since 2018, West Indies have scored a six in every 34 balls, the best for any team leading to the Cricket World Cup 2019. Their big hitting ability make them a proper entertainment package that the whole world waits for.

Suddenly the batting order looks in good shape with the return of the Universe Boss, Chris Gayle. We saw the glimpses of the old Gayle in the ODI series against England this January, when he cracked 424 runs in just 4 matches with an explosive strike rate of 134, hitting a world record 39 sixes in the process.

This will be his 5th – and last -- World Cup. And he comes into it a changed man, with a new-found sense of responsibility. It is not all flash bang anymore; he takes time to settle in, he looks to bat deep and put his team in a position of comfort. 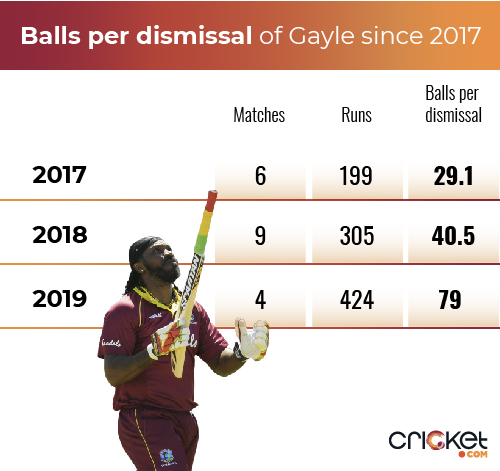 The graph tells the story: Gayle plays more balls per dismissal, and scores more runs per innings at a crackling strike right. And at the same time, West Indies have found the perfect number 3 in the form of Shai Hope. Since 2018, he has been the third highest run-scorer among all batsmen – and what is more important is that if Evin Lewis fails at the top of the order, Hope – who has an astonishing record in the nine games he has opened in -- can step out alongside Gayle.

Hope is also an excellent player of spin, so Windies are more likely to keep him in the number three slot. In the last away series against India, Hope was the only batsmen who not only countered the spin duo of Kuldeep and Chahal but took them to the cleaners. 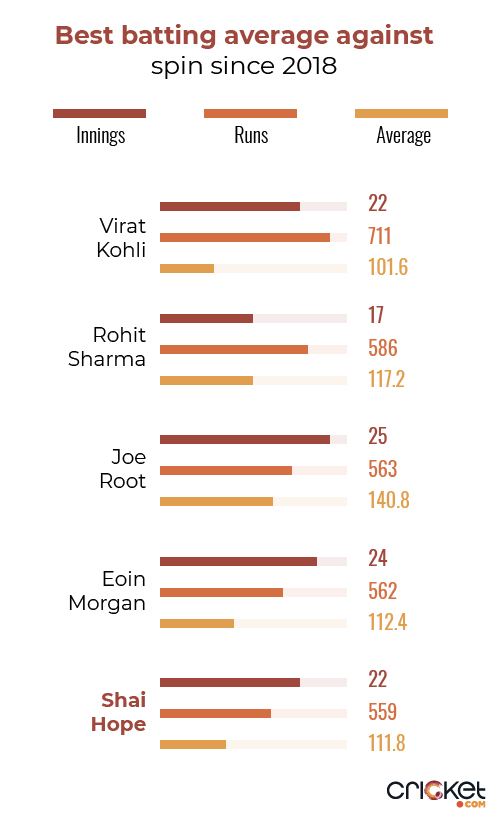 The problem is in the middle, where the struggling Darren Bravo and the inconsistent Shimron Hetmyer create a hole. Bravo’s main problem has been his inconsistent stroke play – he plays out way too many dot balls, then tries to make up by hitting out at everything. Since 2011, Bravo’s Strike Rate of 69 is the lowest after Samiullah Shenwari and Ashgar Afghan for any batsmen who have scored a minimum of 1500 runs. 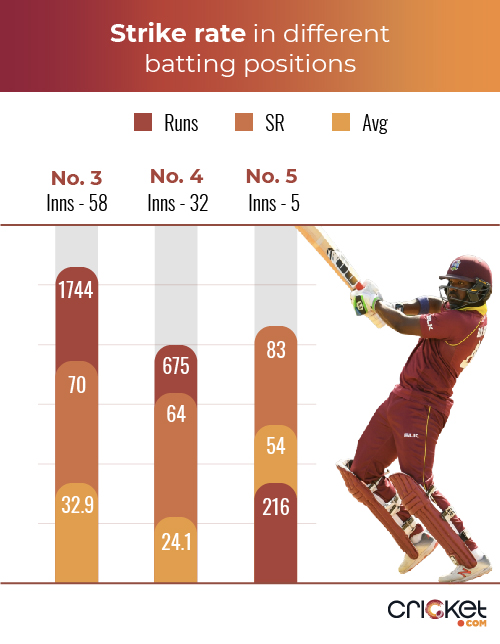 Hetmyer’s numbers present a different picture. He had a terrible IPL for Royal Challengers, with just a single half century in the midst of a string of failures. In 2019, apart from scoring a hundred in the third ODI against England, Hetmyer has been a hit and miss player. There is no doubt about his capability, but it hasn’t reflected in his performance. 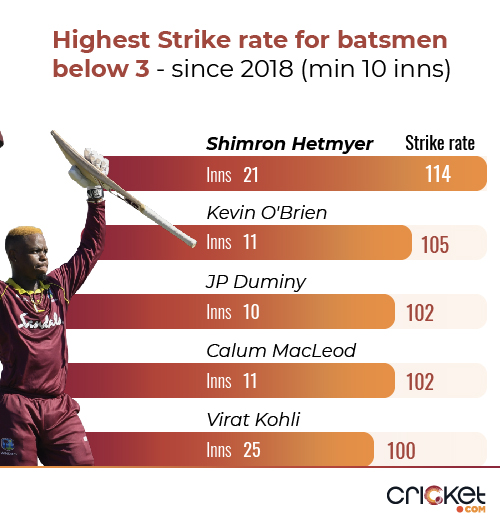 To make up for the weakness, though, there is always skipper Jason Holder who, along with Andre Russell, will play a major part in the Windies campaign. Holder has the most runs, of all players, of any batsman batting at number 6 or below; his x factor is his versatility, which allows him to come in at any point in the lower middle and score at a decent rate. 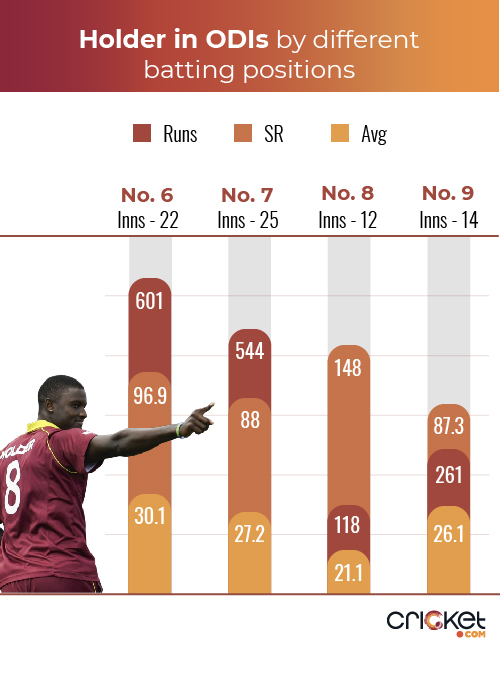 When it comes to the bowling, the current West Indies’ pace battery is among the best in recent years. The likes of Oshane Thomas, Shannon Gabriel and Sheldon Cottrell come into the Cup on the back impressive performances against England. Gabriel has a bowling average of 22, the best among the current lot of pacers. The one worry is that they tend to leak runs, which lessens the pressure caused by the wickets they take early.

Spin has not been a West Indies strength; here they have Ashley Nurse and Fabien Allen. The finger spinner, Allen, has picked a single wicket in 7 matches. Windies spinners enter the CWC with 49 wickets under their belt, the lowest for any team. And they also tend to give away runs at an unhealthy rate. In 2019, the West Indies spinners have conceded at 6.6 runs per over, the worst after England.

Winning teams usually have an X factor, and for the West Indies that comes in the form of Andre Russell. After a spectacular IPL that saw him being adjudged the Most Valuable Player, the big Jamiacan’s confidence will be sky high. In 14 matches this IPL Russell hit 52 sixes, second only to the 59 Gayle had blasted way back in 2012.

Russell and Holder, providing the lower order impetus, will also need to chip in with some tight overs if the pacers leak runs at the top – and Russell’s record inspires confidence in this regard.

Despite a suspect middle order, the West Indies look a dangerous side – but as things stand, the men in maroon will need their star batsmen to provide 40-50 runs above par to provide a cushion for their bowlers.