While KXIP look to make their case for a playoff berth stronger, RCB seek their first win of the season.

Kings XI Punjab (KXIP) host Royal Challengers Bangalore (RCB) in match 28 of the Indian Premier League (IPL) 2019 at Mohali. While RCB have not found the luck to register even a single win in their 6 matches, KXIP have managed to win 4 out of their 6 matches, which included 3 wins out of 3 at home. For RCB, this match will be all about getting on the board, KXIP will want to keep up the pressure on the other sides in a quest for a place in the top 4. KXIP would not want to mess it up like they did last season.

After winning 5 out of their opening 6 matches, they managed to win just one more match in the entire season, eventually finishing in 7th place. They seem to be in excellent form – with both bat and ball – and will start off as favourites against a RCB team, who are yet to find their feet in the tournament. They have lost 7 IPL matches in a row (Including one last season) and if they lose this match too, it will be the worst beginning to an IPL season for any team.

This will be fourth match of the season at Mohali. In the first match, KXIP chased down a stiff target of 177 against Mumbai Indians (MI), but fought back extremely well in the second game against Delhi Capitals (DC) to snatch victory from the jaws of defeat – courtesy of a magical Sam Curran spell at the death. In the third match against Sunrisers Hyderabad (SRH), batting became increasingly difficult, but KXIP just about got over the line with one ball to spare, thanks to fifties from KL Rahul and Mayank Agarwal, when they chased down 151.

Talking about head-to-head, RCH have a slender lead having won 12 out of the 22 matches between these two sides. However at Mohali, KXIP and RCB have won 3 matches apiece from their 6 matches against each other.

KXIP have won 2 out of their 3 matches at home this season chasing. Traditionally, Mohali is a win toss, field first sort of ground. The teams chasing have won 29 out of the 52 IPL matches. Since 2016, teams fielding first have won 9, while team batting first have gone on to win 8 times, which makes it difficult for the captain to decide as to what he wants to do at the toss. Given that KXIP have won 2 out of their 3 matches at home chasing and even in the game they batted first, it was DC, who chose to field first. The captain who wins the toss, will definitely want to bowl first as the pitch eases up a bit and batting becomes a tad easier in the latter stages of the match.

RCB’s struggle at the death

In this season alone, RCB have thrown away a chance to win a couple of matches – one against MI and another one against Kolkata Knight Riders (KKR) – either because their batting choked or because the bowlers could not contain the batsmen at the death. In 2016 RCB reached the final. While their bowling was still not the best in the tournament, their batsmen – led by Virat Kohli and AB de Villiers – ensured that they in the final phase. In the following seasons (including 2019) however, their performance with bat and ball have been well under par. In 2019, so far, it has been a forgettable performance thus far.

Here’s a look at RCB and KXIP’s performance at the death since 2018. KXIP too are going through similar problems at the death, however, they are slightly better off than their opponents: 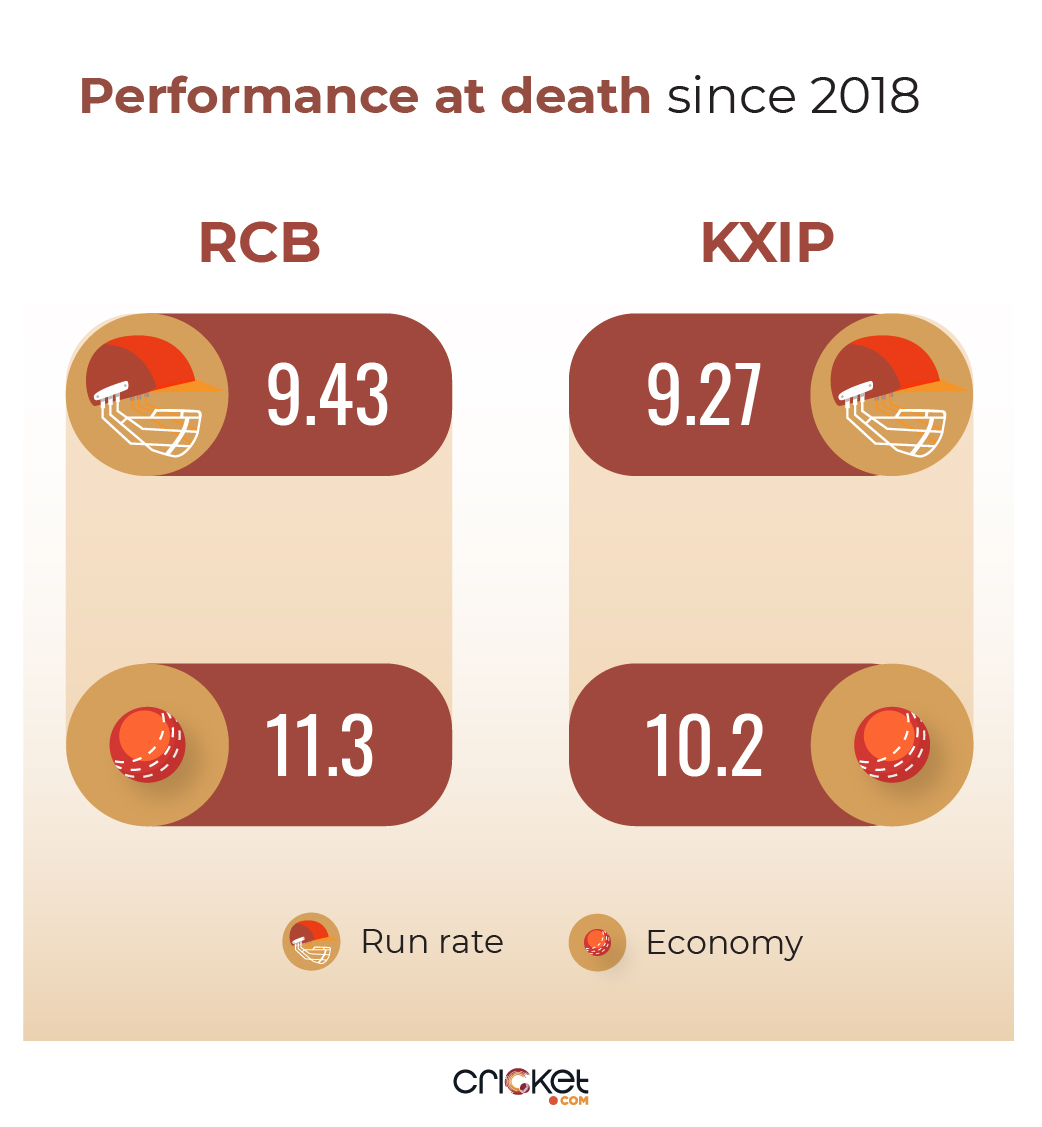 In fact RCB have the worst economy rate at the death since 2018 among all teams, while KXIP are the third worst, behind RCB and CSK

While KXIP went in with just one spinner in their previous match at Wankhede, considering a relatively slow track in Mohali, Ravichandran Ashwin will be tempted to get back Mujeeb Zadran in place of Hardus Viljeon. Also, Andrew Tye is another option in Viljeon’s place as his variations could come in handy at the start and also at the death. Also, it will not be fair to drop Karun Nair after giving him just one game. But KXIP could explore the option getting all-rounder Moises Henriques in his place and rope in Murugan Ashwin in Viljeon place, which would add depth to their bowling as well as batting.

As far as RCB are concerned, they are yet to try out Washington Sundar in their XI in 2019. Sundar is not only an excellent bowler in the powerplays, but could also score a few runs down the order or can even be sent to open the innings, like he has done for Tamil Nadu or for his TNPL team. Mohammed Siraj has been poor throughout the season and should be a no-brainer to replace him with Umesh Yadav. Also Shivam Dube too could be given a chance to solve some of the batting woes to give RCB more depth with the bat. Also, RCB have signed Dale Steyn as a replacement for Nathan Coulter-Nile. He could come straight into the XI as a replacement for Tim Southee.

In fact, Steyn last played in the IPL in 2015. If you look at the overall IPL numbers of Steyn and the other options at the death for RCB, the South African fast bowler leads is head and shoulders above everyone. However, due to persistent injuries, Steyn is no longer the bowler he once used to be, but he could very well come in handy at the back of some impressive performances for South Africa. 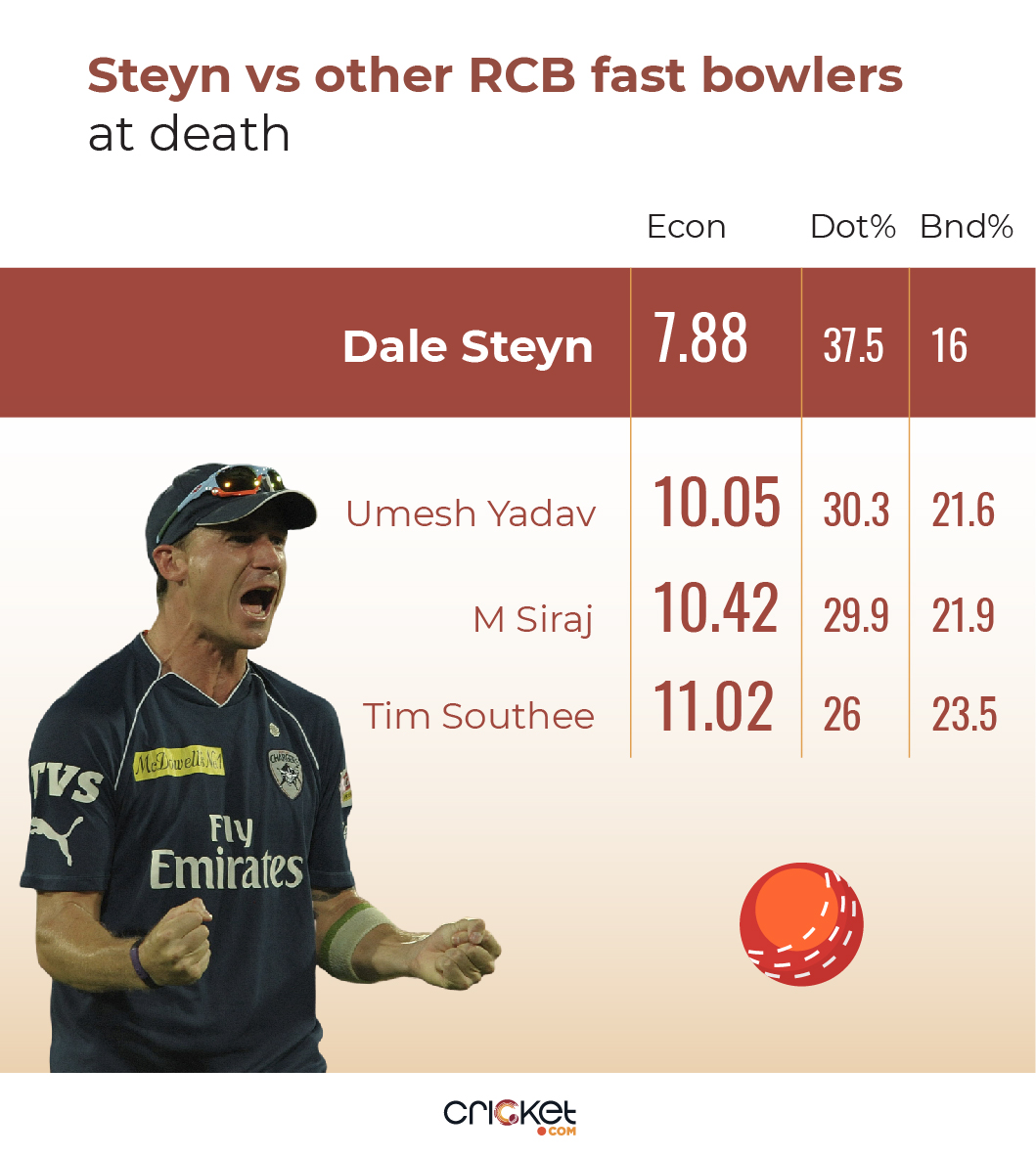 It is not secret that Chris Gayle struggles against off-spinners, especially early in his innings. However, this season he has faced just 6 deliveries from off-spinners, scored 1 and has been dismissed once – by Harbhajan Singh. He has done well to be off strike for as much time as possible this season, but if RCB play their cards right, they could get the big man early.  This makes more of a case for RCB to include Sundar in their XI. 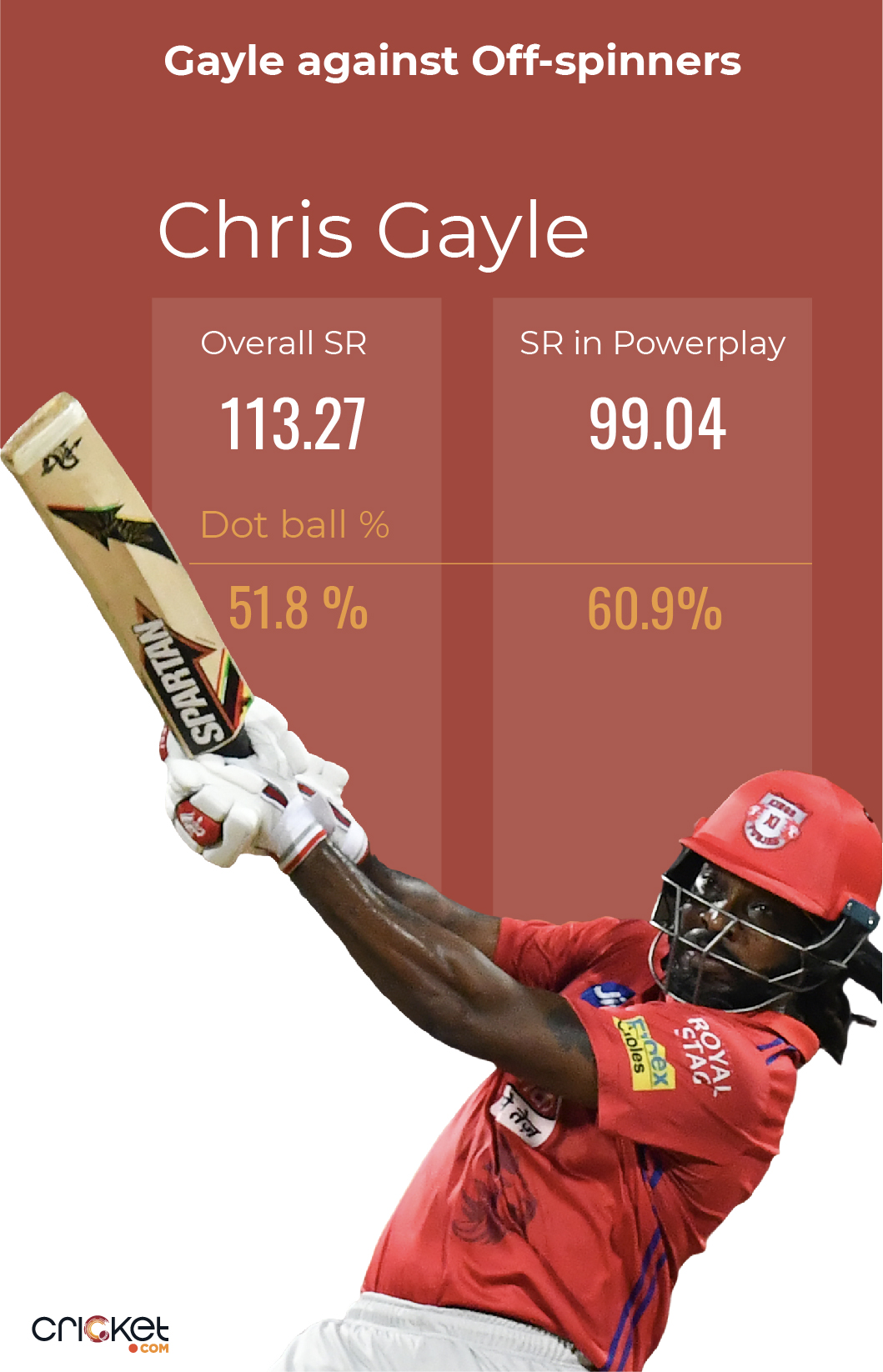 Ashwin and Kohli have faced each other in 16 IPL matches. What’s interesting is the off-spinner has never dismissed the RCB skipper, despite bowling 103 deliveries. Kohli has scored at a strike-rate of 131.06.