Come the World Cup, Australia bring their A game

Come the World Cup, Australia bring their A game

Australia and the art of never say die

The Australian team was in a state of disarray for the major part of 2018. The infamous Sandpapergate had resulted in their two most important players – Captain Steve Smith and Vice-captain David Warner – being banned for a period of 12 months.

The captaincy passed to the ‘un-controversial’ Tim Paine, who in his first outing led Australia to a 0-5 defeat at the hands of England. The series consisted of predominantly high-scoring matches including a world record 481 by England, a game that Australia lost by 242 runs.

By their next ODI assignment five months later – a three-match ODI against South Africa at home - the team had a change of personnel. T20 captain Aaron Finch was handed the reins of the ODI team, and premier fast bowlers Mitchell Starc, Pat Cummins and Josh Hazelwood, who were supposed to be saved for the Tests, were recalled. Australia still lost the series 2-1 and, two months later, lost to India by the same margin.

When Australia went down 2-0 at the start of a 5-match away series against India in March, the Aussies looked a shadow of their dominant self.
Finch, appreciated for his proactive captaincy, had a torrid time with the bat. During this 13-match period, he scored 281 runs at an average of just 21.6. Many attributed his dip in form to his desire to become a Test match player, and an exposed weakness to the incoming ball. With key bowlers like Starc struggling with injury, the team was in a disarray just 2 months before the World Cup.

And then things began slotting into place. In the third ODI, Finch showed grit and accompanied an in-form Usman Khawaja to help the team post 313. The Indians, consumed by their own middle order muddle, failed to chase it down despite Virat Kohli’s breathtaking 123. The next game made it evident that the victory was not a fluke. Chasing a mammoth 359, Khawaja and Peter Handscomb put together 192 for the fourth wicket. With more than 10 runs an over needed in the last 10 overs Ashton Turner, unheard of previously, scored a 43 ball 84* to help Australia cross the line with ease. The never say die spirit of Australian cricket was in full display. Khawaja with a century once more, helped Australia brush India aside in the last game to take the series 3-2 – the first time a team from Down Under had won an ODI series in India in 10 years.

In their last assignment before the World Cup, the Aussies thumped Pakistan 5-0 in the UAE with Finch, now fully in form, scoring 451 runs at an average of 112.75.
In high pressure games, the advantage lies with the team that has been there before. The Australian team – with Warner and Smith back from their ban - has a majority of players from the World Cup-winning team of 2015, and the support staff includes players like Ricky Ponting who have won multiple World Cup titles – showed during the round-robin stage which they ended in second place, with seven convincing wins to just two hard-fought losses, including a thumping 64-run win over favorites England.
Come Thursday Australia, in its eighth appearance in a Cup semifinal, will face off against England yet again, this time in a do or die game. 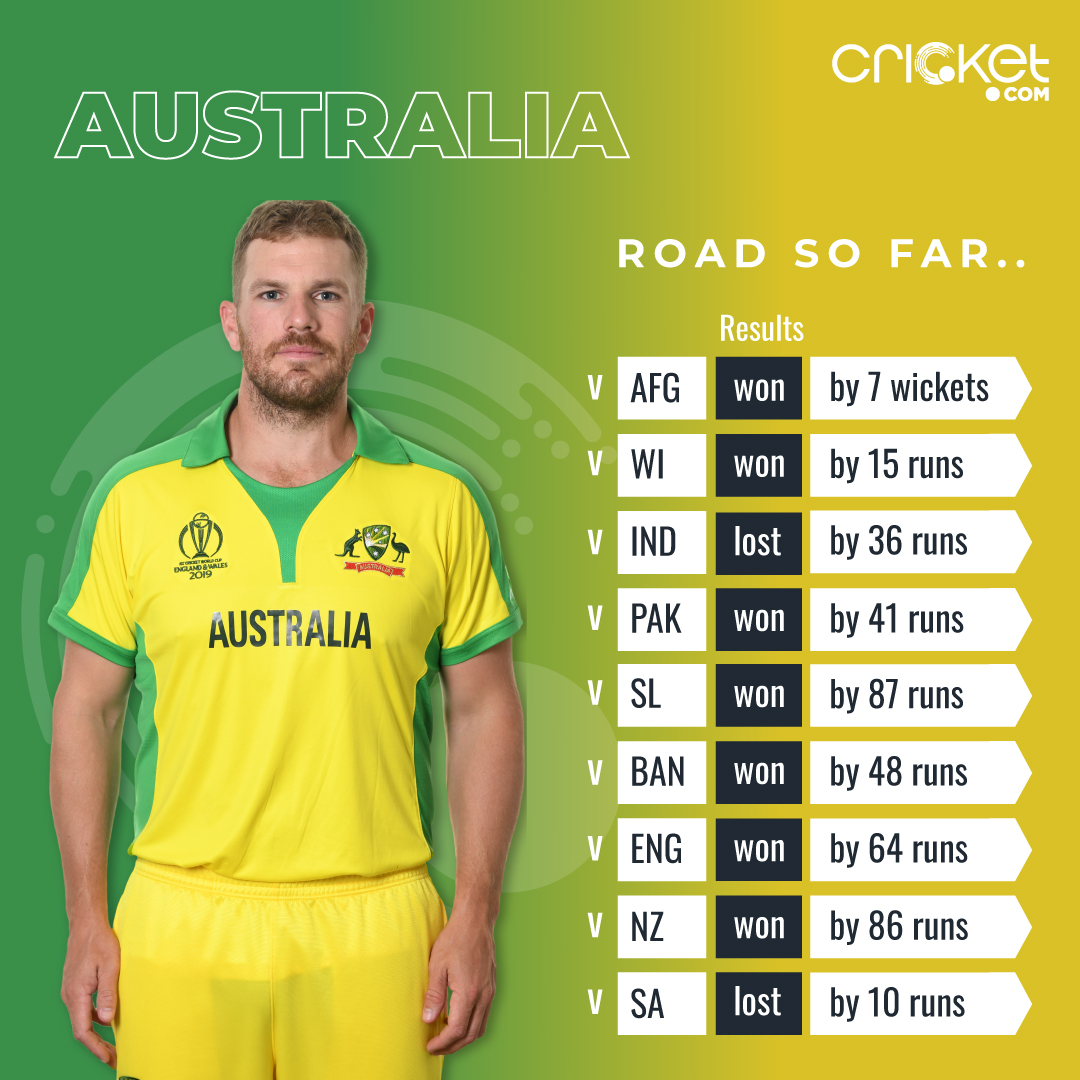 The formidable opening pair: Warner and Finch have scored 45% of Australia’s runs in this tournament, second only to India’s openers. Warner’s slow approach early in his innings was in question in the initial games, but he soon proved that a layoff of 12 months has only made him hungrier and determined to make up for lost time. Finch has been the perfect ally - happy to take an occasional risk in the opening overs when Warner is settling in, then equally content to play second fiddle once Warner gets into full flow.

Their partnership of 96 helped Aussies chase down 208 in the first match against Afghanistan with ease. Their stands of 146, 80, 121 and 123 helped the Aussies put up good totals and win against Pakistan, Sri Lanka, Bangladesh and England respectively.

Sound middle order: The West Indies were enjoying a dream start to the tournament. Their bowlers were sending down fireballs. However, after reducing the Australians to 79/5 in their group game, things started to take a rather usual turn. Alex Carey (more on him later) joined Steve Smith, who seemed unperturbed by the deafening boos that have greeted him since his return from the ban. Smith handled the West Indian quicks with ease and formed a partnership first with Carey and later with Nathan Coulter-Nile. He was looking set for a century and would have got it too, but for what might be the catch of the tournament by Sheldon Cottrell. Australia managed to score a decent 288, thanks to some late hitting by Coulter-Nile – and that was enough to upend the hit or miss West Indies batting.
Once again, during their eighth game against the New Zealand, the Aussies were 92/5 when this time Carey joined Usman Khawaja. Their 107-run stand helped Australia post 243, a score that New Zealand fell 86 runs short of. Smith or Khawaja have managed to pull the team out of trouble whenever they found themselves in one.

Find of the tournament: Alex Carey was included in the Australian set-up after an excellent Big Bash outing in 2017-‘18. By the end of the 2019 World Cup, the 27-year-old might just be one of the most sought-after Australian players. He is the third highest Australian run getter in the tournament with 329 runs (only Mushfiqur Rahim – 367 --has scored more as a designated wicket keeper). In the two games against West Indies and NZ when the top order failed, he scored 45 and 71 to help post decent totals. In the two losses, against India and South Africa, his innings of 55* and 85 respectively helped Australia get within touching distance of the target. In addition to his contributions with the bat, he has 19 dismissals with the gloves, the maximum in the tournament thus far, and he is just 3 dismissals away from breaking Adam Gilchrist’s record of most dismissals by a keeper in one edition of the World Cup (21, 2003 WC)

Starc continues from where he left off: Mitchell Starc was the Player of the Tournament in the 2015 World Cup. He had 22 scalps to his name with an economy of just 3.5 in that edition.

Starc entered the 2019 edition on the back of injury breaks and a mediocre outing against India in Tests towards the end of 2018. As Australia kicked off their campaign against Afghanistan, Starc took a wicket in his first over and has never looked back. He followed his lone wicket spell against the Afghans with a five-for against the West Indies. He was clearly the one man between the West Indies and the finish line that day. The same can be said about their game against Sri Lanka when, after an impressive start by the Lankan openers, Starc pulled things back to end up with four-for. Another four-wicket haul for Starc, aided by a five-for by of Jason Behrendorff, helped the Aussies blow England apart.

Starc collected his best figures in the tournament in the team’s eighth league game, against New Zealand, when he took 5/26. He also chipped in with a couple of important wickets against Pakistan and Bangladesh. It is interesting to note that the only two games the Aussies have lost are the ones when he has conceded more than 6 an over - 1/74 against India and 2/59 (in 9 overs) against South Africa. A lot of Australian hopes lie on Starc’s shoulders (or his wrist, rather)

The flop show: Going into the semis, the biggest concern for Australia will be the form of Glenn Maxwell. He has scored 155 runs in the tournament at an average of just 22.1, which is largely helped by his 46* against Sri Lanka. Oppositions have targeted him by bowling short, a strategy that has reaped rewards. Maxwell’s ability to chip in with a few inexpensive overs (he has been wicketless so far) is perhaps the only reason why the management has persisted with him.

20 overs shy: While Mitchell Starc has been on fire and has received reasonable support from Pat Cummins and Behrendorff, Australia’s biggest weakness lies with the bowlers bowling the remaining 20 overs. All other bowlers apart from the three collectively average 50.5 runs and pick up a wicket once every 50.7 balls, with an economy rate of a touch under 6.

With Usman Khawaja ruled out of the tournament, England’s strategy against Australia becomes straightforward. See off Starc, attack the fourth, fifth and sixth bowler; when bowling, take out the openers early and pray that Carey has an off day.

However, what Australian cricket has taught us is that when it comes to the big stage, for them chips are never down.