Consciously took the game deep, wanted to be there till the end: Mandhana 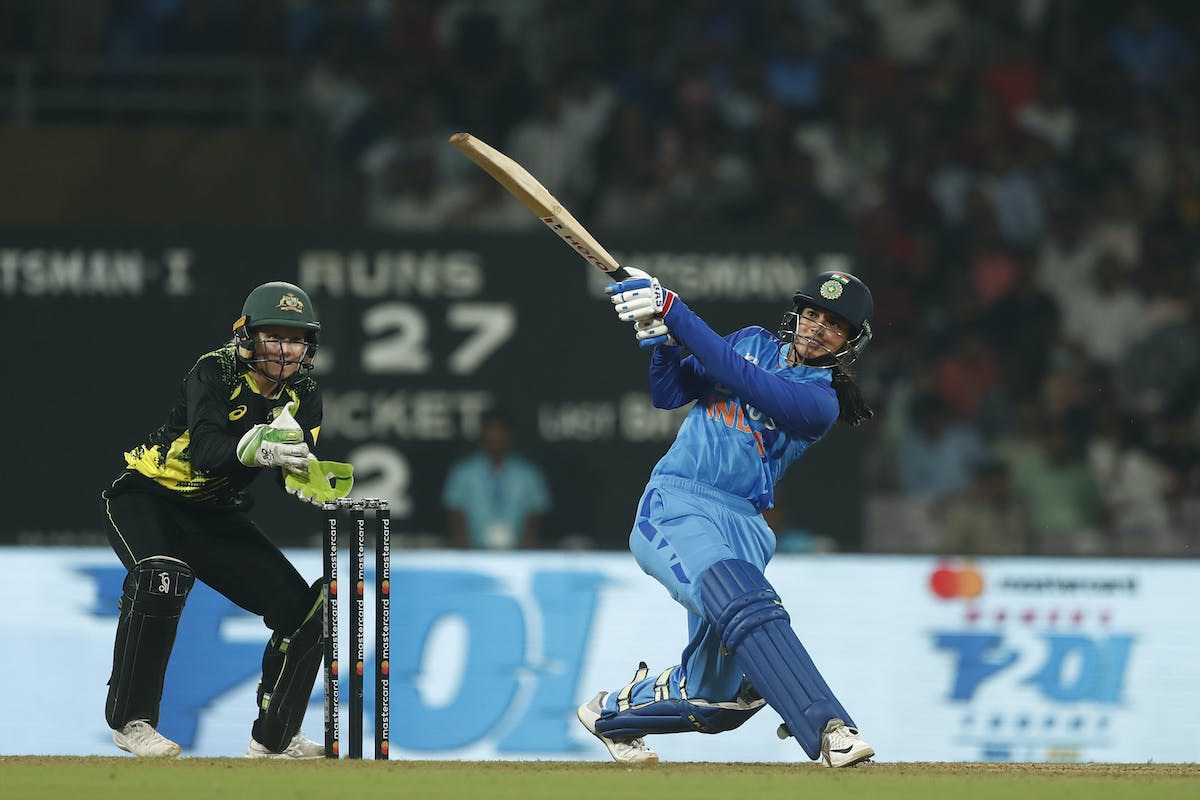 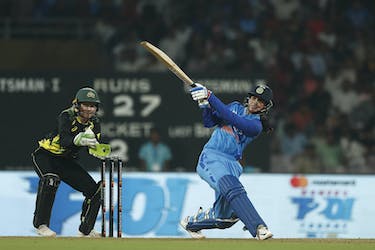 Consciously took the game deep, wanted to be there till the end: Mandhana

The team’s showing in the second T20I, Mandhana believes, is going to serve as a huge confidence-booster for the side

Smriti Mandhana was left disappointed and infuriated after she threw away her wicket on a batting paradise in the first T20I, where she perished for 28 after getting off to a very good start. The disappointment, however, ultimately ended up spurring her on to play a match-winning knock in the second T20I on Sunday, where she struck a flawless 79 in 20 overs before smashing 13 off 3 balls in the Super Over to help the Women in Blue level the series against the World Champions.

India, on Sunday, were set a daunting target of 188 but unfazed by it was Mandhana. Along with Shafali Verma, she got the team off to a flyer — India raced to 55/0 in the powerplay — but unlike in the first T20I, the southpaw ensured to cash in on her start as she posted the joint third-highest score of her T20I career to help take the side over the line.

Speaking in the post-match press conference, the 26-year-old revealed that her primary strategy on the night was to take the game deep and give the team the best chance to knock off the target.

“I was very disappointed in the first match and Mumbai wickets are very good to bat on. To get out on these wickets is actually disappointing. It is like you have actually taken a chance out of yourself because we do not get as many good wickets as that,” Mandhana said.

“While chasing today, I did not want to make the same mistake that I did in the last match. Once a wicket falls, we get stuck for a few overs in terms of run rate, so in my head, I was trying to take it deep. I trusted people around me to hit sixes and I wanted to be there. Unfortunately, I do not know what shot I played!”

On most days, Mandhana’s 79 would have been enough for the side to get over the line but on Sunday in Navi Mumbai, the Women in Blue could only manage a tie. It meant that Mandhana had to come out again and swing her willow.

Super Overs don’t always pan out as planned, but luckily for Mandhana and India, everything the opener touched turned into gold as her onslaught — 13 off 3 balls — all but ensured a win, the hosts posting 20 in their quota of six balls.

Fascinatingly, however, the 26-year-old revealed that though she managed to score 13 off the 3 balls she faced, she in fact tried to play it a bit safe.

“After Richa got out, me and Harman (captain Harmanpreet Kaur) spoke about it and we knew that we could not afford to lose wickets. So, we just had to try and hit the boundary, rather than hitting a six. Because, this is a different rule as compared to the Big Bash, where all ten could bat. But here it was different,” she said.

“If we would have got out, our innings would have ended there. So, we had to be a bit smart and try and hit boundaries.

“I had actually aimed at a boundary but it went for a six. I was really, really blank.”

The 79 in the second T20I was Mandhana’s second fifty in three T20Is, and the opener revealed that she’s now started to be more calculative with her approach. The 26-year-old said that she was pleased with how she and Verma started off the chase, labeling it ‘the most mature Powerplay we had.’

“Right from the Commonwealth Games, I have been timing well. Now, it is also about calculating it well. We have a bigger responsibility in the batting order now.

“We (Mandhana and Shafali) have days when one of us goes there and bats well. Today, when we chased 185, we actually did not go bang bang like the way we do. We were a bit more calculative. It is good on her as well, whenever she hit a six, she actually looked to take a single as well.

“This was the most mature Powerplay we had. Going bang bang is very easy, but to chase such a total, a bit more calculative approach helps.”

One criticism that’s been directed towards the Indian Women’s side is that they tend to falter under pressure, but Mandhana said that the victory on Sunday serves as evidence for the fact that the Women in Blue are a side that’s constantly improving and developing.

The team’s showing in the second T20I, she believes, is going to serve as a huge confidence-booster for the side as they aim to move to the next level.

“Australia is an amazing team. But we all back ourselves… We have given them amazing fights, but close matches are something that the whole Indian team is trying to work on. Not many things go our way, but people are adapting to the pressure.

“Chasing 45 off 25 balls, maybe a year ago, the Indian team would have thought otherwise, but we have match-winners now. The way Deepti, Richa, Devika batted, they are developing well.

“This game is going to help massively. The T20 World Cup is still some time away, but our first aim is to win this series. The way the first game went, to come back and win it in this fashion, that is going to boost up the confidence of all the girls.”

The third T20I of the five-match series will be played at the Brabourne Stadium on Wednesday, December 14.