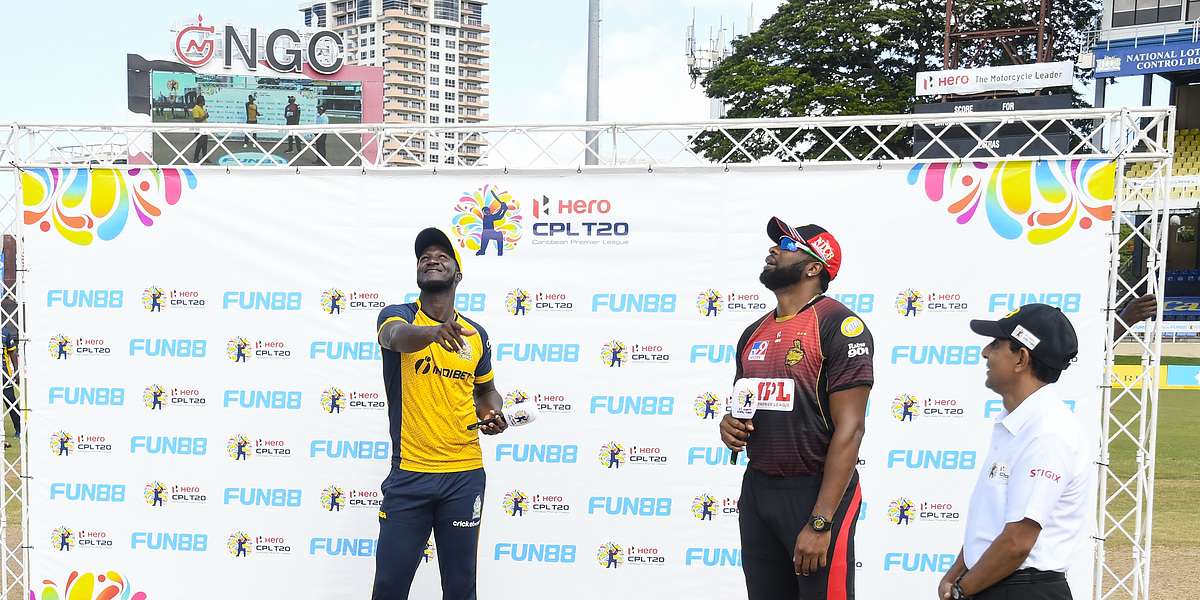 After all the struggles and hard work, it all comes up to this one match that matters. On the grand stage, the two-time champions Trinbago Knight Riders will be locking horns with the first-time finalists St Lucia Zouks.

Both teams are coming off thumping wins in the semi-finals. Trinbago won against Jamaica with ease in the first and Zouks walked past Guyana in the second semi-final. However, the biggest concern for Zouks, is the form that Trinbago are carrying. They have to think out of the box to outsmart the champion team. In addition, they haven’t won a single match against the Knight Riders since 2017 in CPL. Can they turn the tables against a team who have won 11 in a row this season? 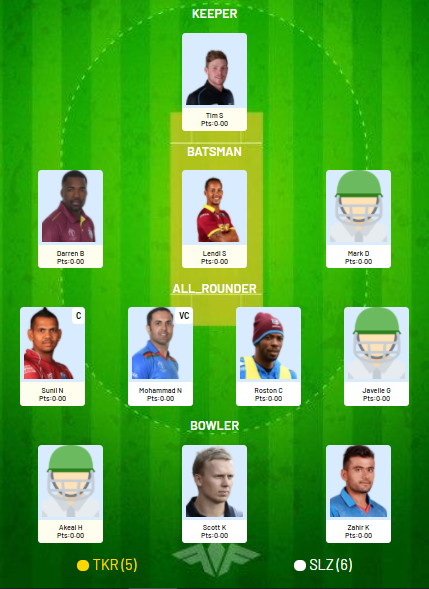 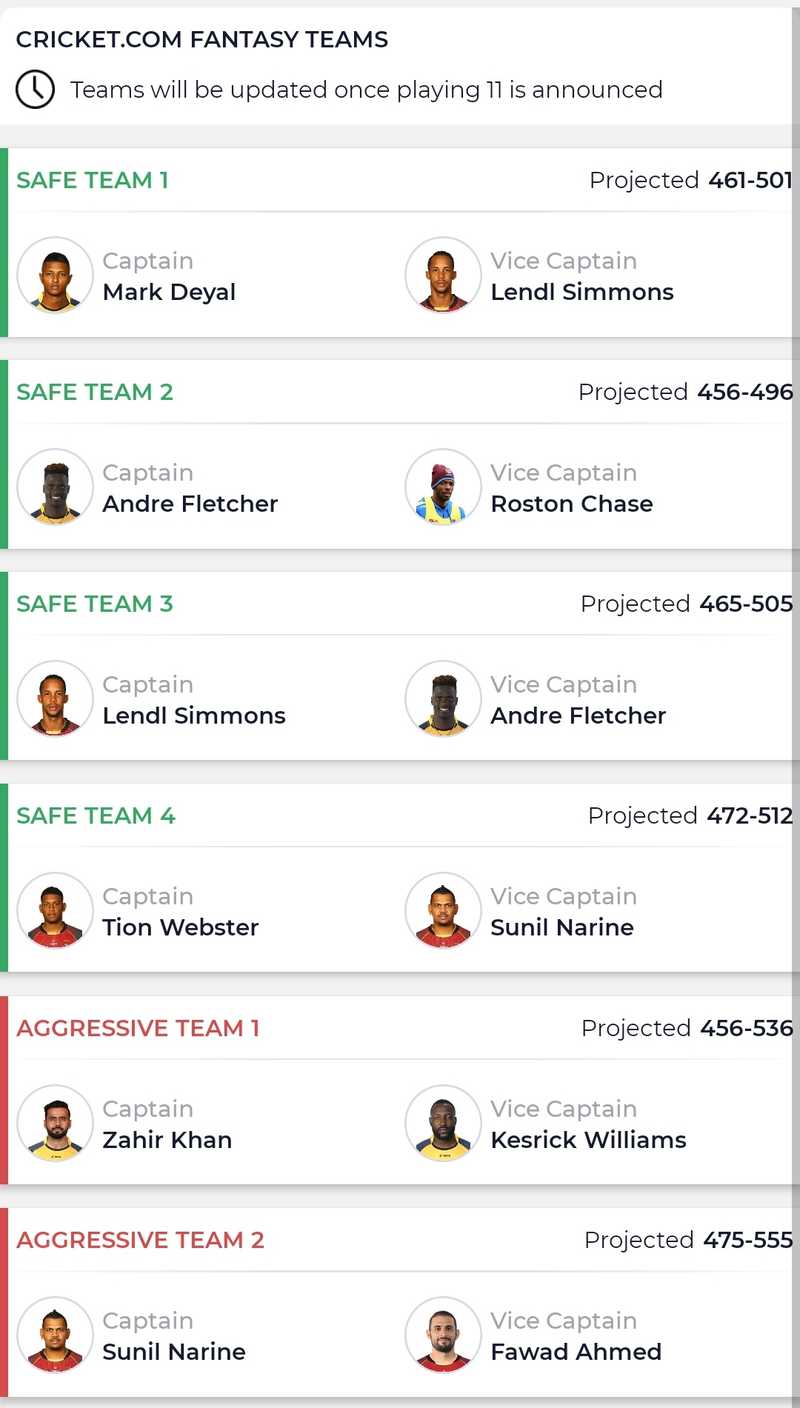 The whole season has belonged to the bowlers, not only in Tarouba, the case was similar even in Port of Spain. The bowlers have bagged wickets every 22.2 runs and 18.5 balls.

In any case, at the Brian Lara Stadium, the batsmen have had some relief this season. On an average 131 runs have been scored in the 1st innings. 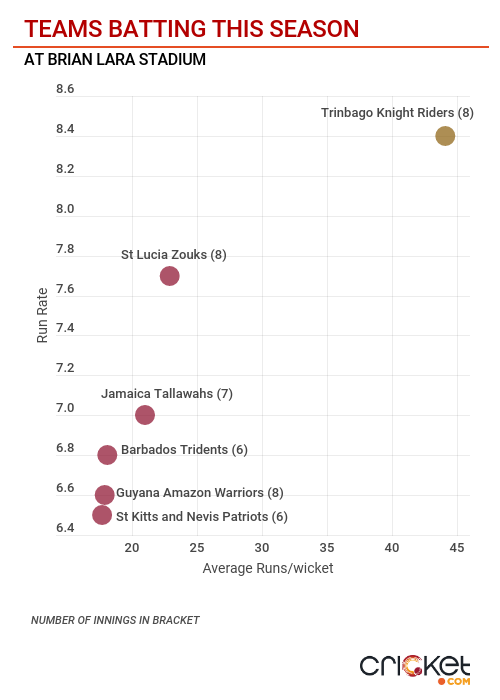 It is no secret that this season of CPL has belonged to the spinners. They have bagged 51% of the wickets this season. It is just not about wickets, scoring against them also has been a difficult feature. An economy of 6.0 as compared to the pacers' 8.0 is a confirmation of it.

The case has been the same even at Tarouba, the spinners have dominated in the wickets section. Especially the wristspinners, both the leggie and the Chinaman have been able to strike early. 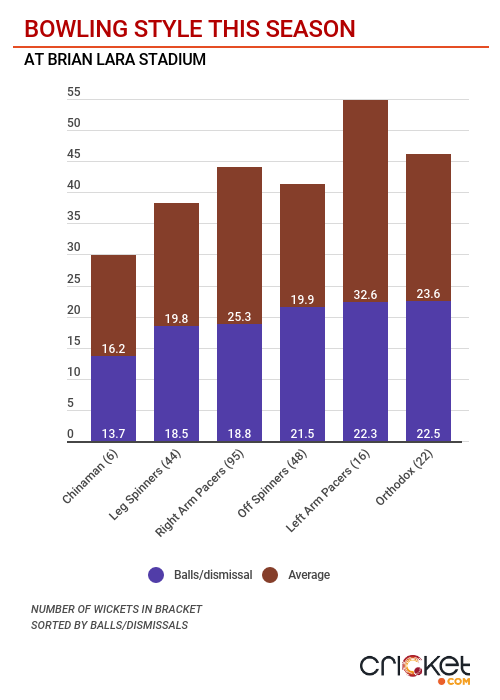 The Zouks have been the best bowling side this season, majority of their wins also has been dependant on their bowling. They have bagged wickets every 15.4 balls and 17.8 runs which is the best among all teams this season. The Knight Riders are just behind them with 16.8 balls per wicket. This is an indication of packing the team with bowlers.

The top order of Trinbago has done well. Simmons coming back to form at the right moment, Darren Bravo in good touch, Sunil Narine’s explosion at the top all adds up to their sensational batting performances this season. As for the Zouks, the batting responsibility lies on Roston Chase.

Akeal Hosein is one of the young and exciting prospects to watch out for in the final. In a season where spinners have come on top, Scott Kuggeleijn has been a maverick among the top wicket-takers pack.

The US-based seamer has the advantage when bowling against Fletcher in T20s. In 4 innings he has dismissed Fletcher thrice with a strike rate of less than 100. 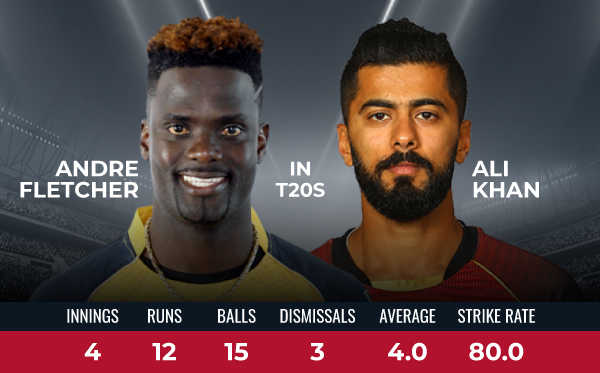 There has been a healthy contest between these two West Indian champion players. In a 19-inning tussle, Sammy has scored runs at a strike rate of 164 and Bravo has bagged him 8 times. 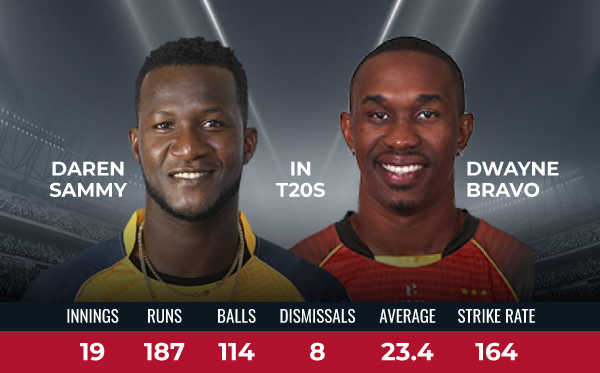 The Knight Riders batsman has had his hiccups against the Zouks' star bowler. 6 innings scoring at an average of 6.5 and strike rate of 68.4 is evident of it. With Simmons back to form, a mouthwatering contest awaits. 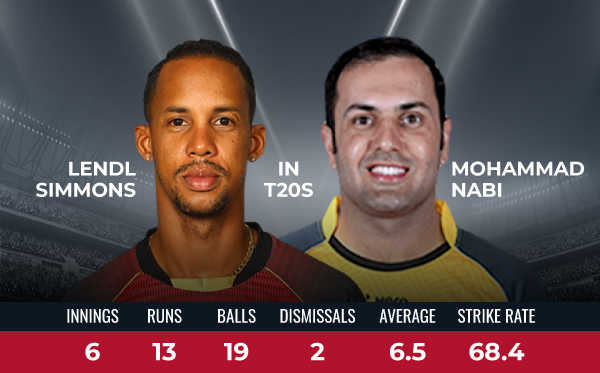 SUNIL NARINE: One of Sunil Narine’s best qualities this season has been his ability to score runs on a consistent basis. Nowadays, it has been a feature among batsmen though to see off Narine with the ball. This is one of the reasons why he always ends up as one of the most economical bowlers. Coming to his batting, Narine has scored 144 runs in 5 innings at a strike rate of 148.4, which is second-best among players with 100+ runs this season.

Narine has 6 wickets this season at an economy of 4.5. With an ability to fetch points both with bat and ball, Narine posseses all the qualities of a fantasy captain. His record in finals of CPL is also a consideration. He has 5 wickets at an economy of 3.9 and an average of 15.4.

Our Criclytics player projector predicts, Narine would score 7-26 runs and pick 0-3 wickets in the final. 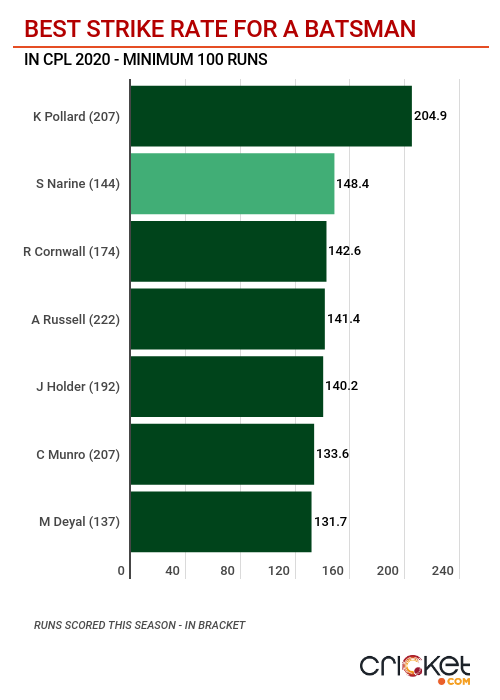 MOHAMMAD NABI: The Zouks have made it to their maiden CPL final and one of the main reasons has been the Afghan allrounder. The three-time man of the match awardee, has been clinical this season with 12 wickets for them and has scored over 150 runs. With left-handers in the Trinbago top order, Nabi is definitely an X-factor who can fetch points with both bat and ball.

Our Criclytics player projector predicts, Nabi would score 7-24 runs and pick 0-1 wicket in the final.

LENDL SIMMONS: Lendl Simmons didn’t have a great start to this season of CPL, but heading towards the business end he has gained form. In the first 5 innings, Simmons scored only 57 runs at an average of 11.4. In the last 5, he has stroked 215 runs at an average of 53.6 and a strike rate of 122.

His 272 runs are the second-most by a batsman this season, adding to that, his record against the Zouks is also impressive in CPL.

Our Criclytics player projector predicts, Simmons would score 16-35 runs in the final. 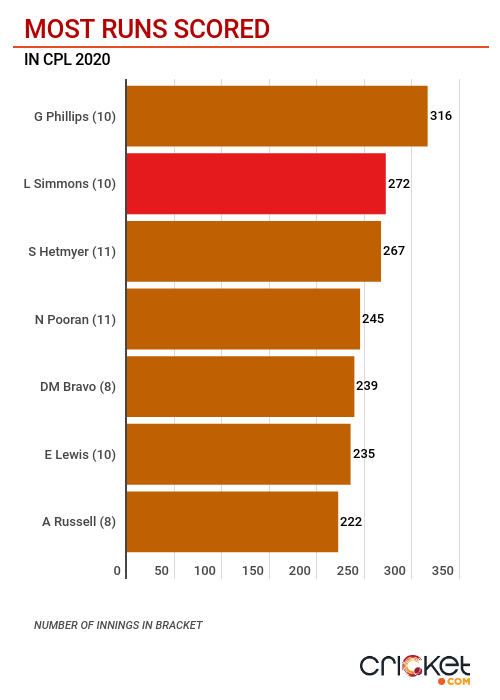 SCOTT KUGGELEIJN: The Kiwi pacer till now has had a good debut season and the Zouks would want him to continue his form for one last time. His 16 wickets are the joint-best in CPL 2020. He has bagged those wickets every 11.3 balls, which is also the best among all bowlers who have bowled more than 15 overs. His early strikes are pretty much needed for Zouks to create history in the CPL.

Our Criclytics player projector predicts, Kuggeleijn would pick 0-1 wicket in the final.