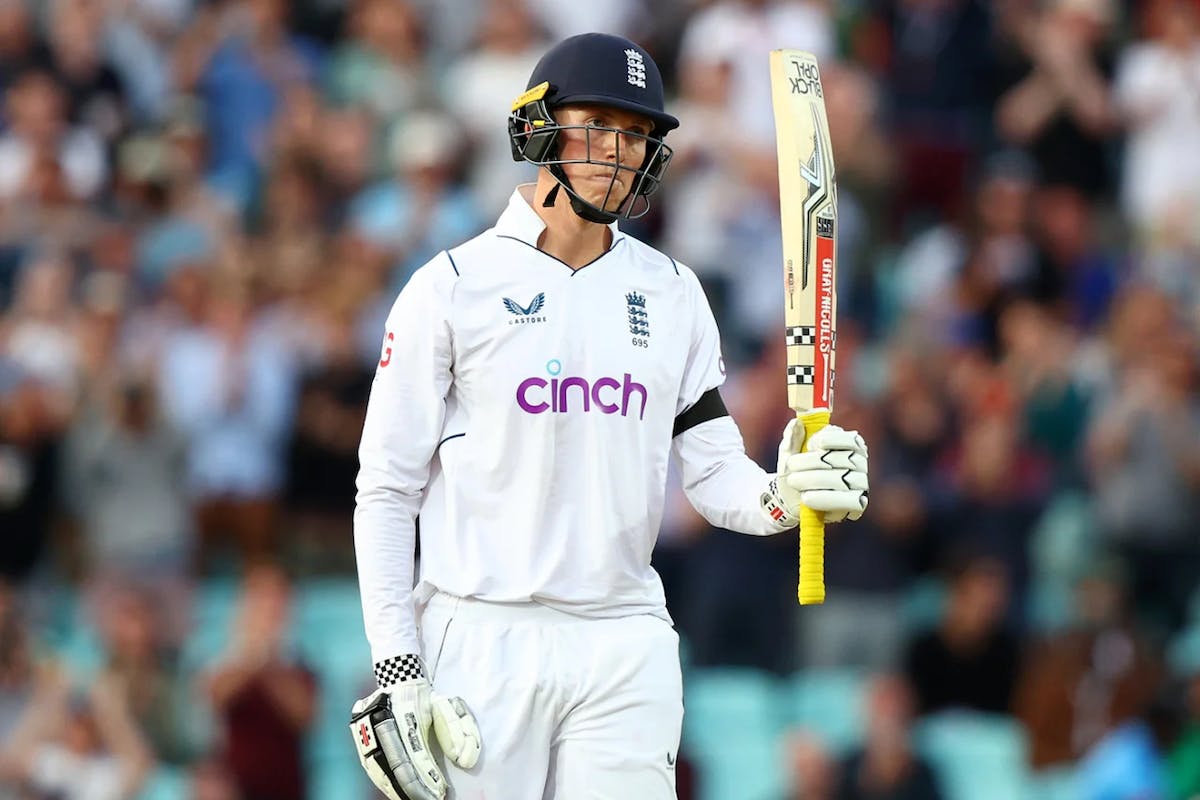 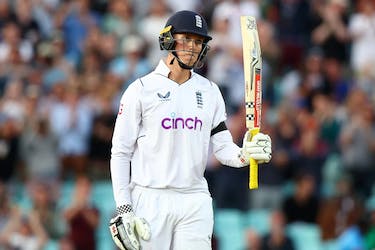 Zak Crawley's dynamic unbeaten fifty took England to the brink of a series-clinching win over South Africa in the third Test at the Oval on Sunday. England were 97-0 at stumps, needing just 33 more runs to reach a modest target of 130 on Monday's final day to take the three-match contest 2-1.

The often struggling duo of Alex Lees (32 not out) and Crawley (57 not out) were both unbeaten at stumps. Victory would give England a sixth win in seven Tests since their new leadership duo of captain Ben Stokes and coach Brendon McCullum took charge at the start of this season.

Even though the floodlights were on, the umpires decided conditions were still too dangerous when play was halted at 6:37 pm local time.

Their decision, greeted by boos from a packed crowd, meant England were denied a win inside two days after Thursday's play was washed out without a ball bowled before Friday's scheduled second day was abandoned following the death of Queen Elizabeth II.

Crawley deployed both his trademark cover-drive and the pull to particularly good effect during a 36-ball fifty featuring nine fours. Left-hander Lees, however, was dropped off the first ball of the chase when he edged Rabada only for Marco Jansen to floor a fourth-slip chance he should have held after getting two hands to the ball.

It was a rare error by Jansen, who had top-scored with 30 in South Africa's meagre first innings 118 at the Oval before taking a Test-best 5-35 in England's reply of 158 after he was unluckily dropped from the Proteas side that lost the second Test at Old Trafford.

Crawley too was reprieved, on 51, when his hard-hit whip shot off express quick Anrich Nortje was dropped by Ryan Rickelton at midwicket. But the real damage had been done earlier in the day when South Africa were dismissed for 169 in their second innings, albeit this was the highest total of a low-scoring game dominated by fast bowlers on both sides.

Earlier, England lost their last three first-innings wickets for the addition of just four runs after resuming Sunday on 154-7. South Africa, who managed just one individual fifty in this series, were 70-1 at lunch, 30 runs ahead.

But the second session saw the Proteas lose six wickets for 76 runs. Left-hander Elgar had added just one run to his lunch score of 35 when Stuart Broad, bowling from around the wicket, had him lbw.

Elgar walked off almost as soon as he was given out having, extraordinarily, opted against a review despite the match situation and his status as South Africa's senior batsman.

Replays, however, indicated the ball would have missed leg stump by a distance, although by then Elgar was back in the pavilion and South Africa were 83-2.

Keegan Petersen batted well for his 23 before being squared up by an Anderson delivery he edged to fourth slip. Rickelton, in for the injured Rassie van der Dussen, was lbw for eight after playing across a Broad outswinger, with his review proving fruitless.

Ollie Robinson, who took a Test-best 5-49 in South Africa's first innings, then struck twice in quick succession. Wiaan Mulder (14) played on before the equally becalmed Khaya Zondo (16) was lbw to a ball that cut back sharply.

Stokes's excellent inswinger then bowled Jansen (four) with what became the last ball before tea and Anderson ended the innings when he caught and bowled Kyle Verreynne.