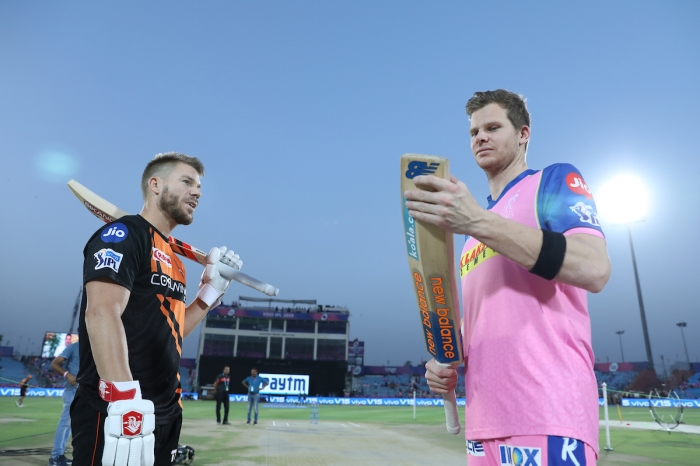 Heading into this game in Dubai, the two teams are in contrasting form – Sunrisers have won three out of their last four matches, while Rajasthan Royals have lost their previous four

These days, social media accounts of sports franchises don’t just give out information about their respective teams but also indulge in banter from time to time. On Friday, after Delhi Capitals defeated Rajasthan Royals, it didn’t take long for the former’s Twitter handle to dig out a recent tweet from the latter which had aged quite badly.

After winning their opening two matches of the 2020 Indian Premier League (IPL) season, the Royals were the only team yet to lose a game back then and they reminded everyone on Twitter about it, posting: “Good night to all fans whose team has a 100% record in #IPL2020”. It’s fair to say that results haven’t quite gone their way since and Capitals’ social media team knew that very well, quoting the aforementioned tweet and adding: “This aged weLLLL” after Friday’s game.

From those two tweets, you get a good idea of how Rajasthan’s season has gone thus far. A campaign that began so splendidly seems to be falling apart quickly. From two back-to-back wins to four successive losses. From two 200+ totals, albeit in extremely batting-friendly conditions, to scores of 137/9, 154/6, 136 all out and 138 all out – Royals need to find a way to get their batting firing once again.

Jos Buttler is one of the greatest limited-overs batsmen of this generation, but he has managed just one 50+ score in five innings this season so far. Steven Smith, a batsman up there with the best of the best, has failed to make an impactful score four times in a row after two fifties to start. When Sanju Samson is in full flow with the bat, it’s one of the most pleasing sights in the game, but just as so often in the past, his performances have dropped after a couple of superb knocks. Simply put, for the Royals to do well, they need consistently good performances from these three batsmen.

Coming to their bowling, the form of legspinner Shreyas Gopal is a bit of a concern. While he was the franchise’s top wicket-taker last season, he has just four dismissals to his name from six matches so far this year. Out of those four wickets, just one has been with a googly, the delivery which brought him much success in the previous two seasons. In IPL 2019, he took 15 wickets at a strike rate of 9.2 with googlies. His economy rate has also jumped up, which probably indicates that batsmen know what to expect from Gopal and he must now adapt accordingly if he has to become a wicket-taking bowler once again. 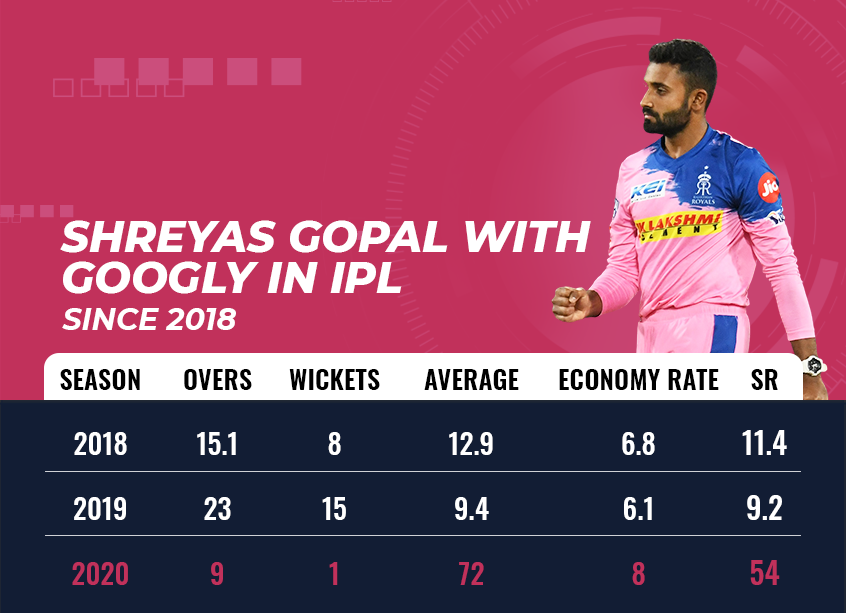 While Jofra Archer has been excellent, the other Rajasthan pacers have been below-par. They would’ve especially expected more from their second overseas fast bowler, but Tom Curran’s economy rate of 11.4 across five matches and Andrew Tye conceding 50 runs in his only game haven’t been ideal.

When you have issues across the board, there’s never a simple fix. But in cricket, the closest you can get to a solution in such cases is having a player who can contribute in multiple aspects of the game waiting in the wings. And Rajasthan have just the perfect player for that. Having seen his performances at the 2019 World Cup and The Ashes that followed, Ben Stokes is perhaps the first player you’d want on your side when the chips are down. And if he is available for the Royals’ clash against Sunrisers Hyderabad on Sunday, this could just be the turning point for the 2008 IPL champions.

On the other hand, while it’s hard to make judgements on Sunrisers’ season so far (three wins and as many losses from six matches), something that cannot be stressed enough is that they’re currently too dependent on their opening batsmen. Since the start of IPL 2019, David Warner and Jonny Bairstow have scored 919 and 686 runs respectively, while all the other players combined have managed 1673 during the same period. Nearly 50% of the team’s runs being scored by just two players is not ideal, even more so when you consider that Warner has missed three matches and Bairstow five since IPL 2019. 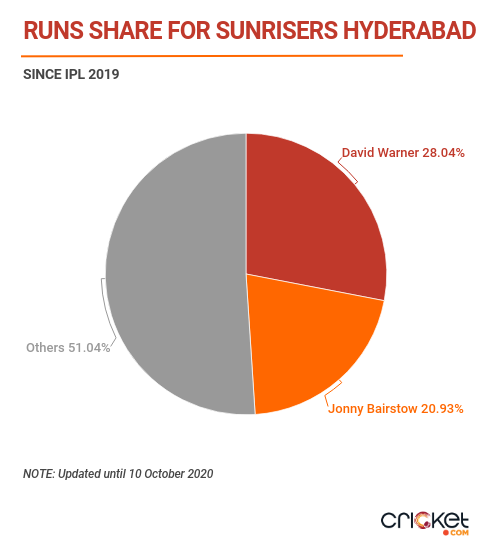 The aforementioned issue was there to be seen against Kings XI Punjab on Thursday, when after a 160-run opening partnership, SRH lost six wickets for 41 runs in the last five overs. On paper, a middle-order consisting of experienced batsmen in Manish Pandey and Kane Williamson followed by youngsters in Priyam Garg, Abhishek Sharma and Abdul Samad looks promising. And if they can perform consistently, then the Sunrisers will be looking good in the race for the playoffs.

Their pace bowling, meanwhile, seems to have a tinge of similarity to it. Apart from Bhuvneshwar Kumar – who has been ruled out of the tournament with injury – their pacers who have played this season include Sandeep Sharma, T Natarajan, Khaleel Ahmed and Siddarth Kaul. Among the four bowlers, only six deliveries (four by Khaleel and two by Natarajan) have been bowled at over 140 kph in IPL 2020 so far. While you can still be a pretty good fast bowler bowling at sub-140 kph, across a bowling attack, you’d like to have a bit of variety.

Australian pacer Billy Stanlake is someone who they can consider. But he hasn’t been in great form recently – since 2019, he has taken 12 wickets in 20 T20 matches at a strike rate of 33. And there’s Jason Holder who is also waiting in the wings. The West Indian pacer isn’t someone who bowls at rapid speeds but can bring some variety thanks to his height. But who do you drop to bring either of them in? The Sunrisers are just too dependent on their overseas players. Warner, Bairstow and Rashid Khan cannot be dropped at any cost and they need Williamson to hold their middle-order together.

While Rashid, unsurprisingly, has been SRH’s best bowler this season, Natarajan has impressed too, especially with his ability to bowl yorkers. In the last five overs of an innings this season, Natarajan has bowled 14 yorkers from 47 deliveries. This impressive showing left former West Indian cricketer and commentator Ian Bishop wondering if Natarajan could get an India call-up. “Anyone can predict whether Natarajan will get a taste of international T20 cricket or not???”, tweeted Bishop on Thursday. 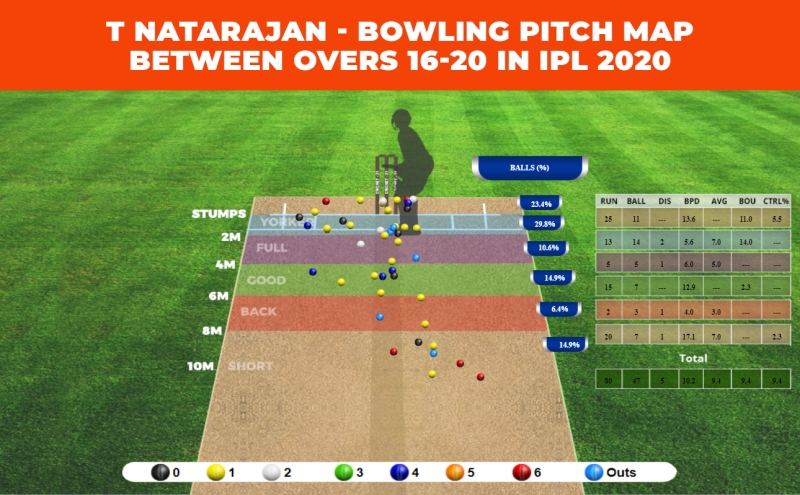 At the end of this fixture, both teams would have completed half of their matches this season. On one hand, a win for Rajasthan could see both teams level on points. On the other, a Hyderabad win could see them four points clear of Rajasthan with the latter drifting further away from the top four. As mid-season contests go, this one is as crucial as they come.