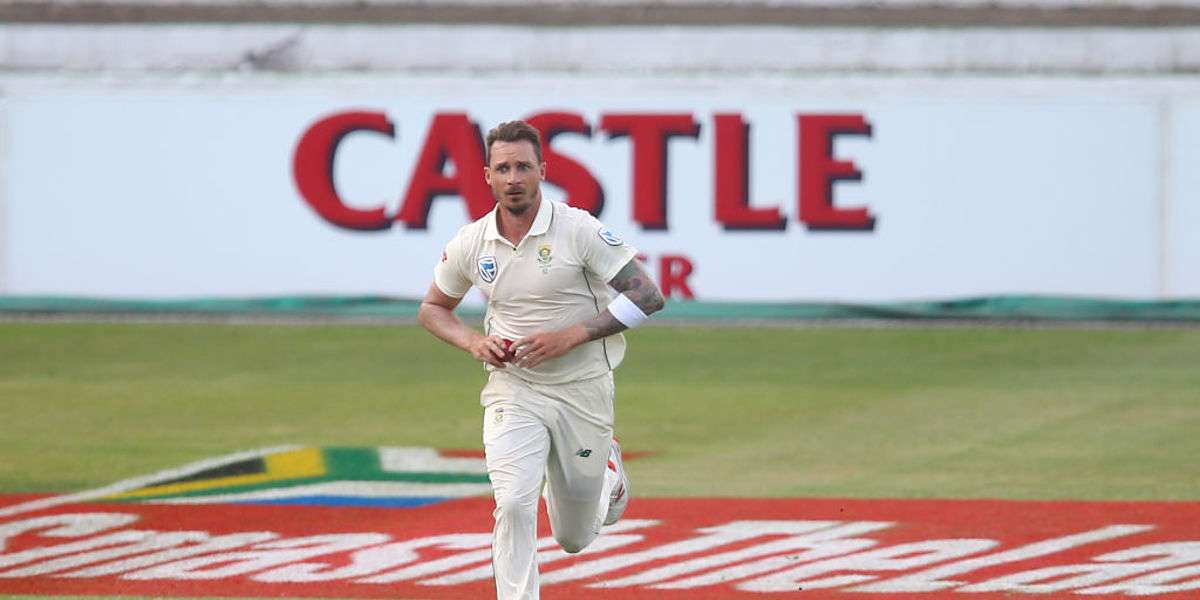 Dale Steyn is awesome. Anyone who disagrees doesn’t really appreciate fast-bowling. 439 Test wickets - a South African record - at 23 runs apiece. The strike-rate translates to a wicket every seven overs - the best amongst pacers with a minimum of 200 Test scalps. A five-wicket haul in every fourth Test - 26 five-fors in 93 Tests.

On the wicket-tally, there are four seamers ahead of Steyn - James Anderson (584), Glenn McGrath (563), Cortney Walsh (519) and Stuart Broad (485) - but the Phalaborwa-born is a notch above this number which merely scratch the surface of fast-bowling analysis. While Asian batsmen are profoundly judged on the basis of their performance outside the Indian subcontinent, the non-Asian seamers are assessed on their ability to pick up wickets in Asia. The second criteria is a harsher standard to maintain given fast bowling involves a lot more toil and the dusty pitches don’t do any favors. For non-Asian pacers, who are not used to the extreme heat, it becomes a further tasking job.

Breaking down Steyn’s bowling numbers on these basis, he averages 24.1 runs per wicket in Asia as compared to 22.6 outside; hence, showing very little deviation. In terms of strike-rate, the deviation becomes as narrow as less than a ball per wicket - 42.9 in Asia against 42.2 outside. The numbers suggest conditions don’t govern the outcome when Steyn is bowling.

As a result, in the toughest of conditions for fast bowlers, it is this Proteas seamer who leads the pack with 92 wickets to his name. The second on the list is Anderson, 33 wickets behind.

The gap between Steyn and his contemporaries doesn’t only exist only in number of wickets, but also in average and strike-rate which further affirms Steyn’s position as the best of the generation. 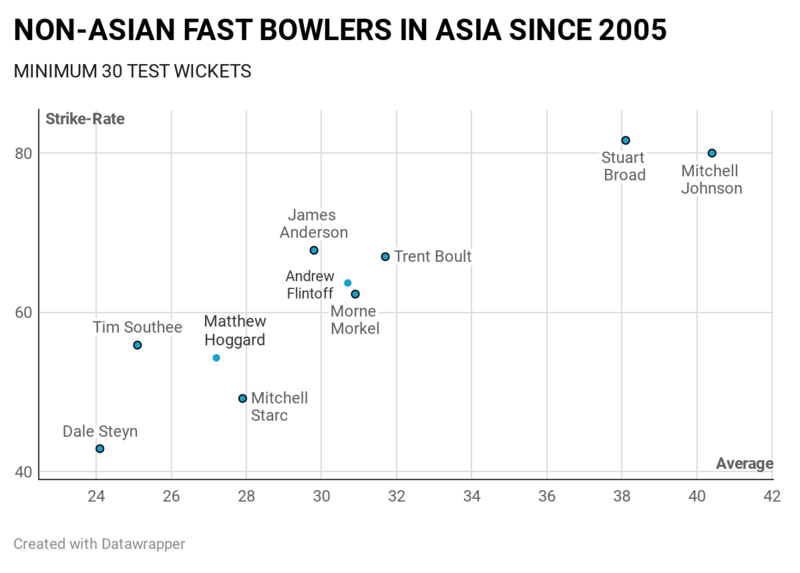 Even if you include fast bowlers from Asia, he is second to only Mohammed Shami. 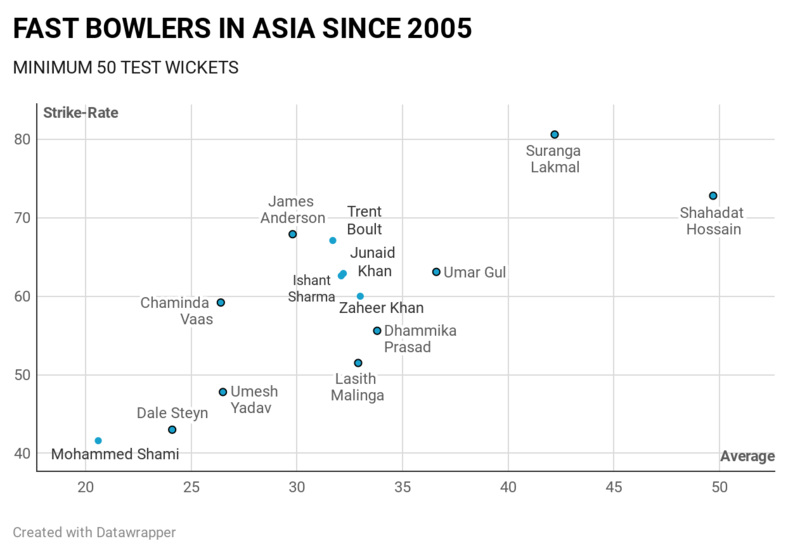 Comparing him with the most productive non-Asian pacers of all generations, Steyn again stands out. Amongst all non-Asian pacers with a minimum of 50 Test wickets in Asia, he is only behind Sir Richard Hadlee in terms of strike-rate. However, when the numbers of the specific eras corresponding to the career span of individuals are put into account, Steyn is unmatchable. 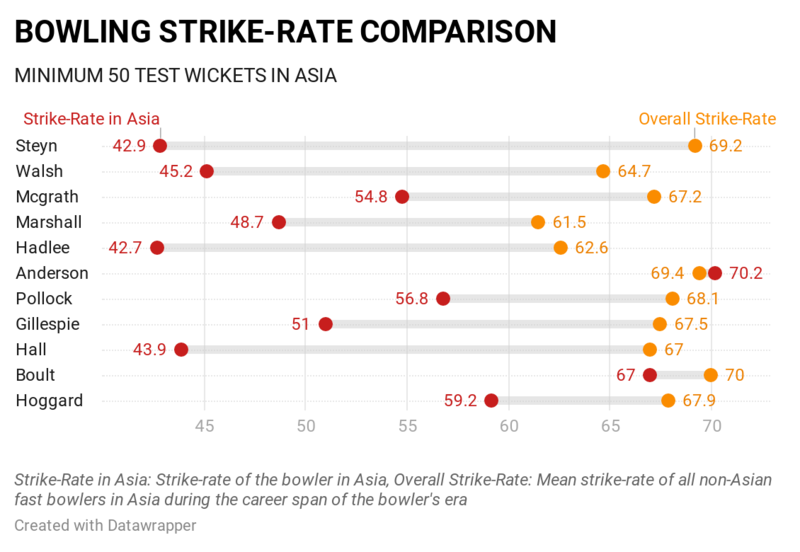 It also must not be forgotten that Steyn’s numbers suffered post 2015 after a series of injuries. He spent almost a decade without any major injury, missing only three Tests for South Africa between May 2006 and November 2015. Over the next 39 Tests, he could play only 12. Up until his first injury in the first Test against India in November 2015 which led to a streak of other unfortunate body blows, the right-arm pacer had an unbelievable average of 22.3 in Asia striking every 39.7 balls. His last Test in Asia - second Test against Sri Lanka in 2018 did not lend him any wicket which was the first time in his career that Steyn went wicketless having bowled in both innings of a Test.

An interesting trend that can be observed from the graph above suggests how the overall strike-rate for pacers of current generation rises. It indicates the inclination towards spin friendly tracks to induce results by Asian sides. During a major part of this period - Between the Sri Lanka tour in 2006 and the Test series in India in 2015 - South Africa did not lose any overseas Test series.

They won 1-0 in Pakistan in 2007. The Phalaborwa Express picked a five-wicket haul in the win in Karachi. They drew 1-1 against India in India twice. Steyn picked a five-for in both those wins - 5 for 23 in Ahmedabad in 2008 and 7 for 51 (his career best) in what AB de Villiers described as one of the flattest decks he has batted on in Nagpur, 2010. South Africa won their first series in Sri Lanka in 2014. Steyn picked 5 for 54 and 4 for 45 in the win at Galle.

In the matches won in Asia, Steyn pouched 52 wickets. The next on the list is Jason Gillespie (40 scalps). Sir Hadlee took 28 wickets in only three Tests and remains unrivalled on both average and strike-rate. Meanwhile, Steyn’s contemporaries are far away from him. 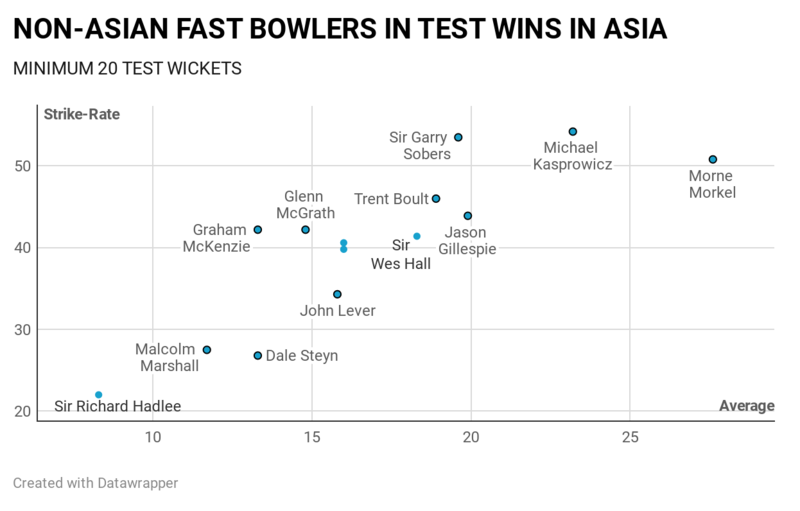 Apart from South Africa’s gala time in Asian conditions, England’s 2-1 win in India in 2012 and New Zealand’s 2-1 triumph over Pakistan in the UAE in 2018 were other huge performances by the non-Asian sides. However, in both those wins, the prime bowlers of these sides - Anderson-Broad for England, Boult-Southee for New Zealand - took a backseat letting the spinners do the work. In South Africa’s dream run, Steyn continued to be the lynchpin of the bowling line-up. It is highlighted by the number of other premier seamers of the side he bowled with. 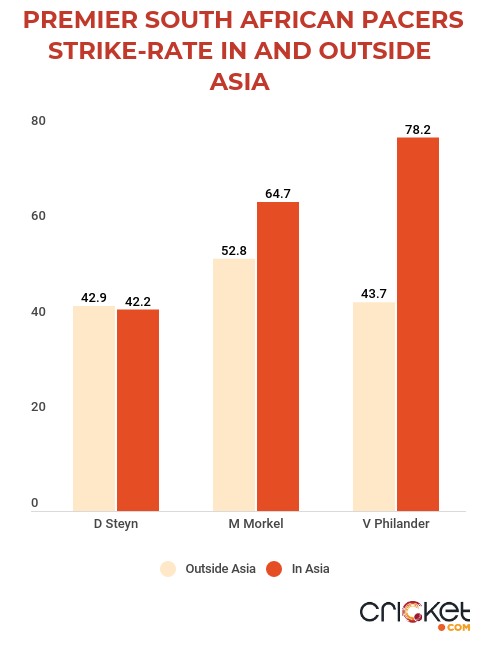 Steyn remains to be the only non-Asian seamer to notch up match-winning five-fors in three different Asian countries. It is his mastery over reverse swing which made him rule the Asian conditions, better than a heavy majority of Asian pacers evidently crowning him as the best of the generation and one of the best of all times.

In a recent interview with Sky Sports, Steyn credited his skipper, Graeme Smith for using him efficiently against the lower-order batsmen that led to his success all over the globe and especially in Asia. Interestingly, only 28 out of Steyn’s 92 wickets in Asia were of the lower order batsmen (number 8 to 11) while as much as 70 percent of them were top order players.