Decoded: Is Bishnoi cut from the same cloth as Rashid? 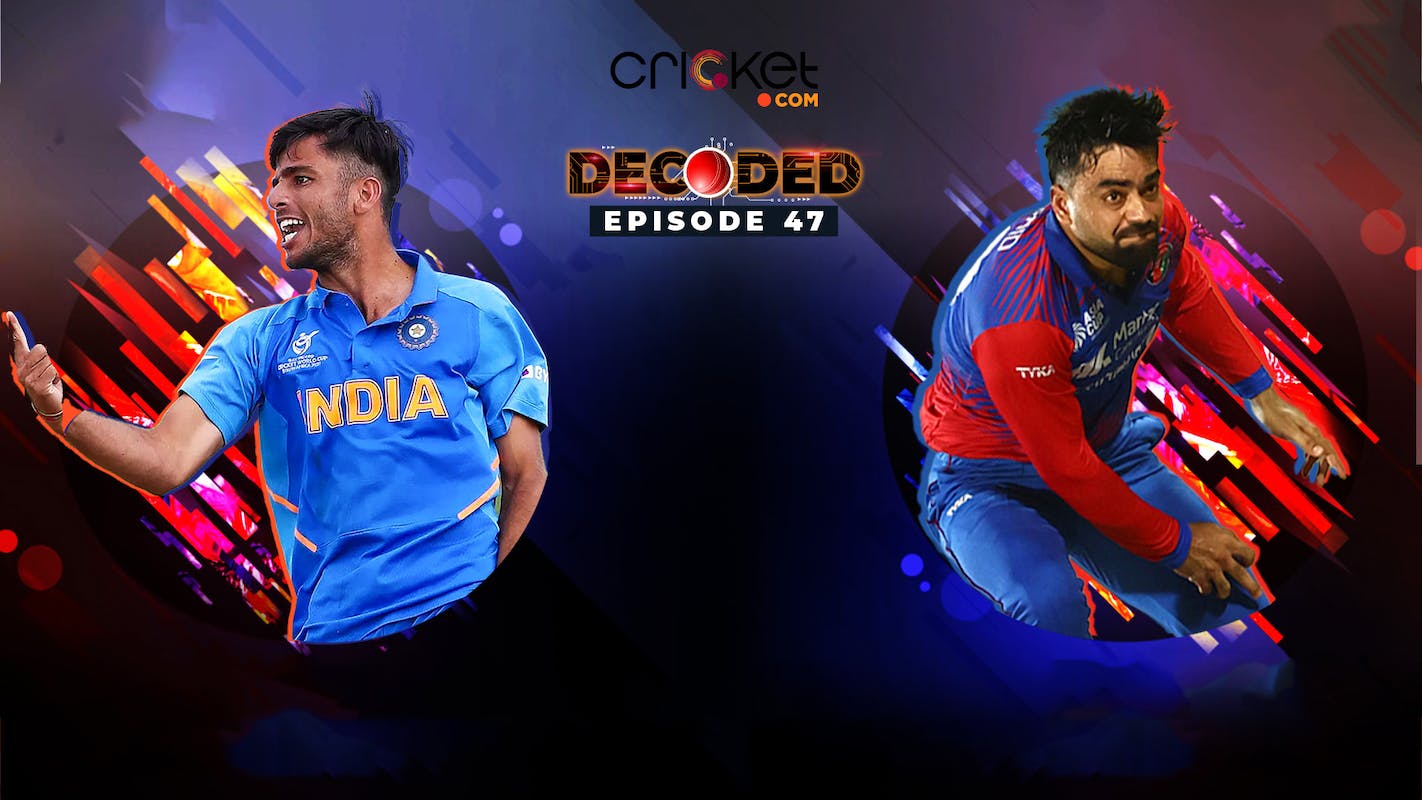 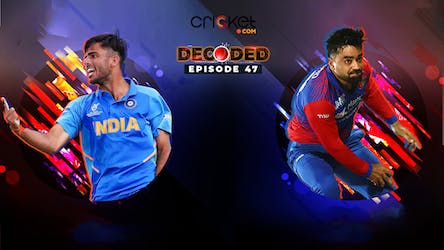 Decoded: Is Bishnoi cut from the same cloth as Rashid?

Ravi Bishnoi has a long way to go in his career but in terms of the bowling style alone, he is the closest thing to Rashid Khan

Ravi Bishnoi is an enigma. There is a moment in his bowling action where he extends his non-bowling arm to full extent while moving in the opposite direction. It looks eccentric but for Bishnoi, it might be effective in his own way. He is a leg-break bowler but brings the ball into the right-handers more than taking it away. So much so that he caught wicket-keeper Rishabh Pant by surprise when he bowled a leg-break in the West Indies. “Oye hoye, leg spin”, exclaimed an amused Pant. 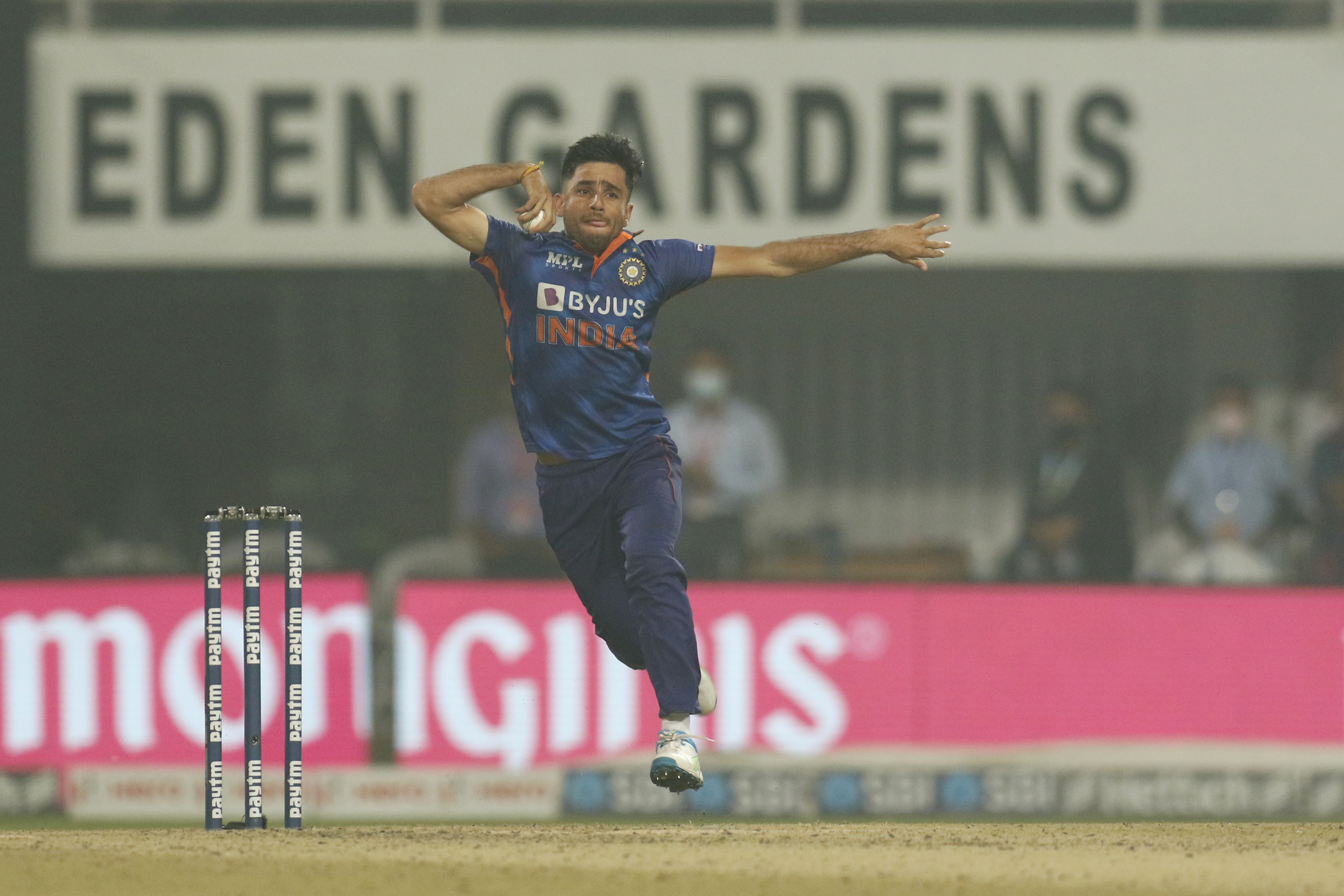 The pace at which cricket is evolving in white-ball cricket, it is vital for players to add new weapons to their armory. For batters, it is the ramp shots. For pacers, it is wide yorkers. Off-spinners are turning into mystery spinners by bowling the doosra. So, what do the leg-spinners have in their kitty?

Bishnoi belongs to this new crop of unconventional leg-spinners which still has very limited entries. In fact, at the international level, he is only the second leggie who turns the ball at a pace that makes it uncomfortable for the batter. The only other guy who does that is Rashid Khan, who is a dynasty of spin bowling himself. Over 450 wickets already in a T20 career of seven years, Rashid’s uniqueness makes him one of the most valuable T20 cricketers around. He is in the hunt to pouch 1000 T20 wickets.

Bishnoi contains that X-factor which makes Rashid a GOAT. Whether he will be in contention for 1000 T20 wickets is a farfetched prospect but in terms of bowling style alone, Bishnoi is the closest leg-spinner to Rashid at present. The claim might seem like a shot in the dark. Bishnoi began his T20 career in 2019, made his IPL debut in 2020 and international career only seven months ago. But he has been fast-tracked into the India side based on his unorthodox bowling nature. He is the beta version of Rashid Khan’s school of bowling.

To begin with, both bowlers rely heavily on their googlies. In T20s since 2020, Rashid has delivered 47.2 percent of his deliveries as googlies. Bishnoi has employed it so much that he has exceeded Rashid by a fair margin. No one else has delivered googlies in as high proportion as Bishnoi - well over 50 percent. Only Wanindu Hasaranga comes in the bracket of these two in terms of using the googly. 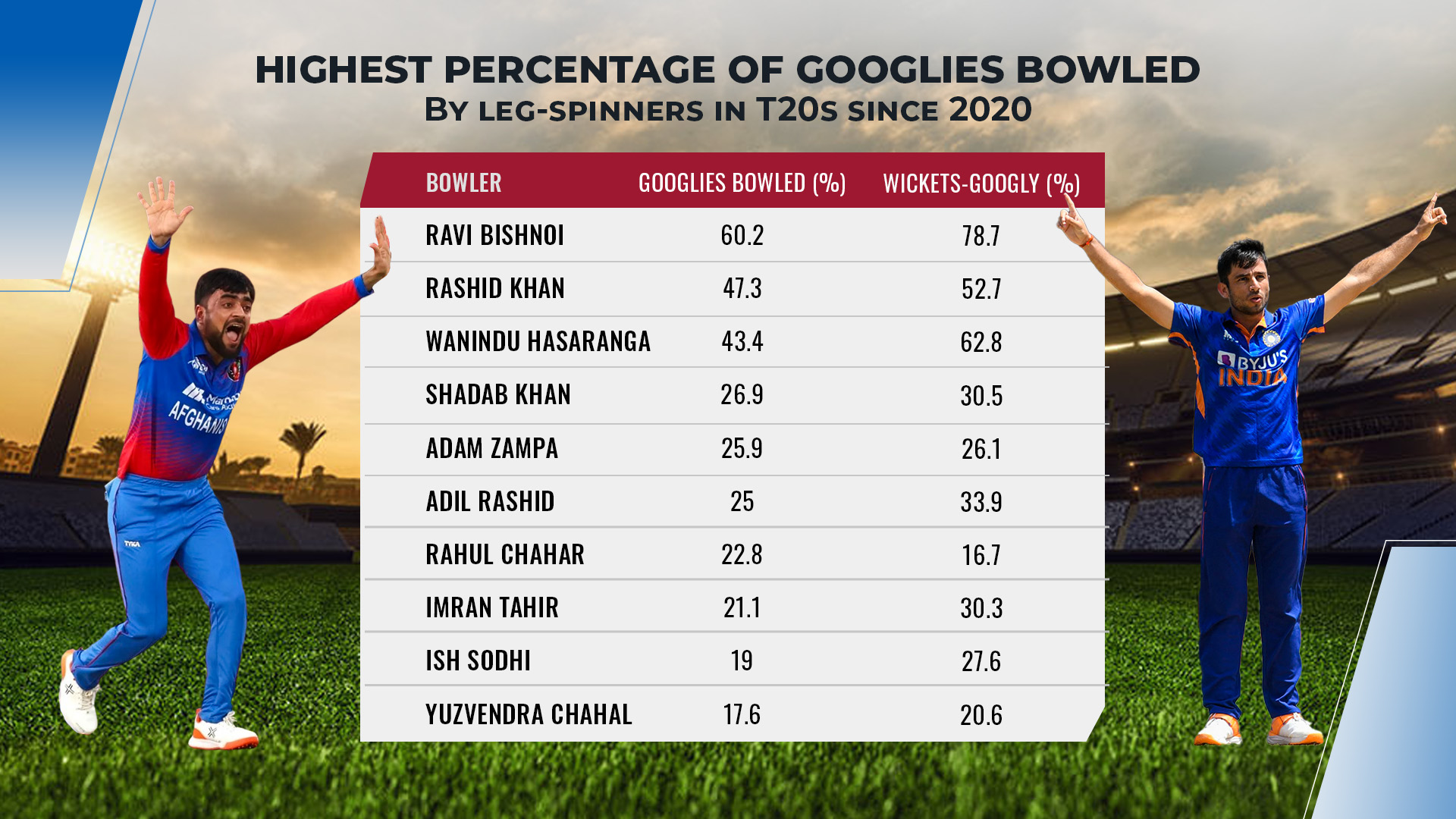 They are also the only three spinners to take over 50 percent of their wickets with googlies.

But it is the pace at which they bowl that puts Bishnoi in Rashid’s bracket. Both Rashid and Bishnoi deliver their leg-breaks and googlies at a higher pace than other leg-spinners - above 90 kmph. Hence, their bowling is not about the loop but rather follows a flatter trajectory, which is their answer to the demands of this ever-evolving game.

Some leg-spinners flight the ball, like Adil Rashid and Yuzvendra Chahal. Anil Kumble, in the earlier years of IPL, was more about pace but hardly turned the ball. Then there are Rashid and Bishnoi, turning the ball at a greater speed. It is an equivalent of a fast bowler swinging the ball at thunderous speeds. 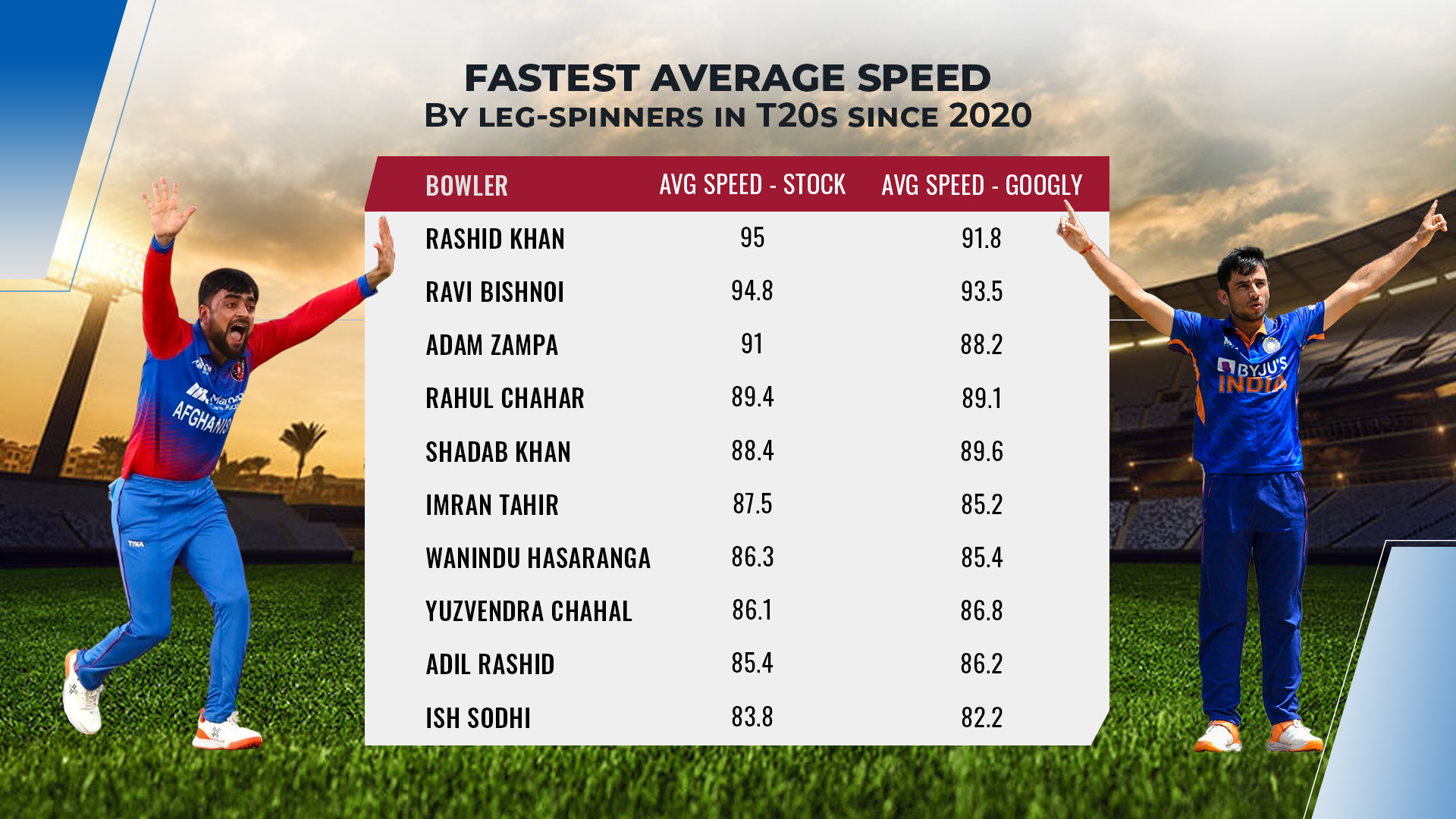 The speed is engineered by a quick rotation of the bowling arm. Rashid presumably has the quickest arm rotation for a spin bowler, making it harder for the batters to decipher him.

Both Rashid and Bishnoi are not tall but bowl with an upright bowling arm. It is an anomaly because leg-spinners use bit of a round arm to flight the ball. Chahal is a prime example. But being unconventional in not wanting to flight the ball, Rashid and Bishnoi’s upright action encourages the flatter trajectory. Hasaranga is a step above. He bowls with both upright and roundish arm, depending on what he wants to bowl. 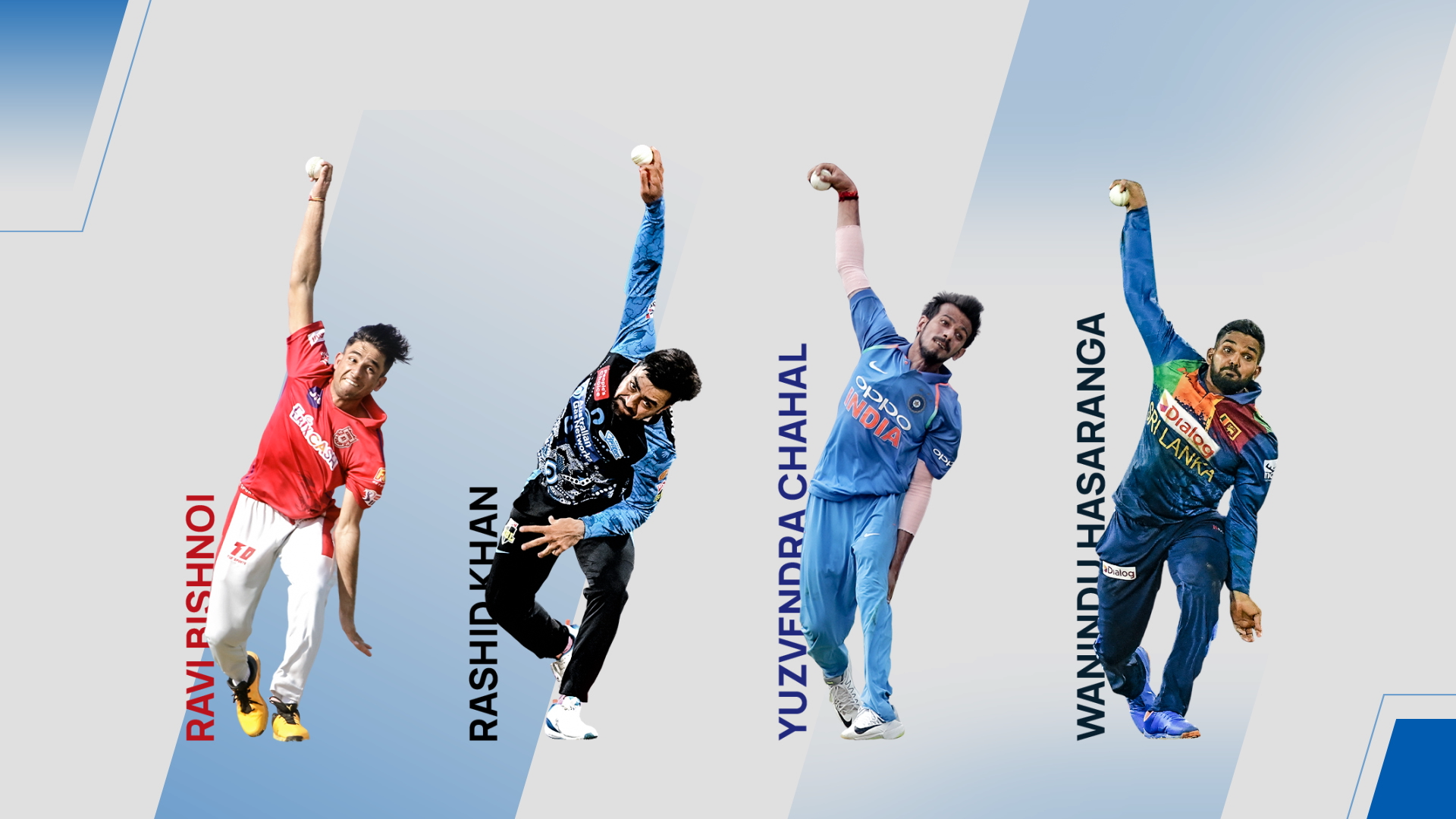 Thus, Bishnoi holds the most similarities with Rashid, both subtle and visible to the naked eye.

But there is a stark dissimilarity as well. You don’t need numbers to deduce that Bishnoi turns the ball a lot more than Rashid, almost in an uncontrollable manner. Rashid’s control on his spin, even when he turns his googlies, has the highest percentage of balls in line with the stumps. Bishnoi, on the other hand, is the least. 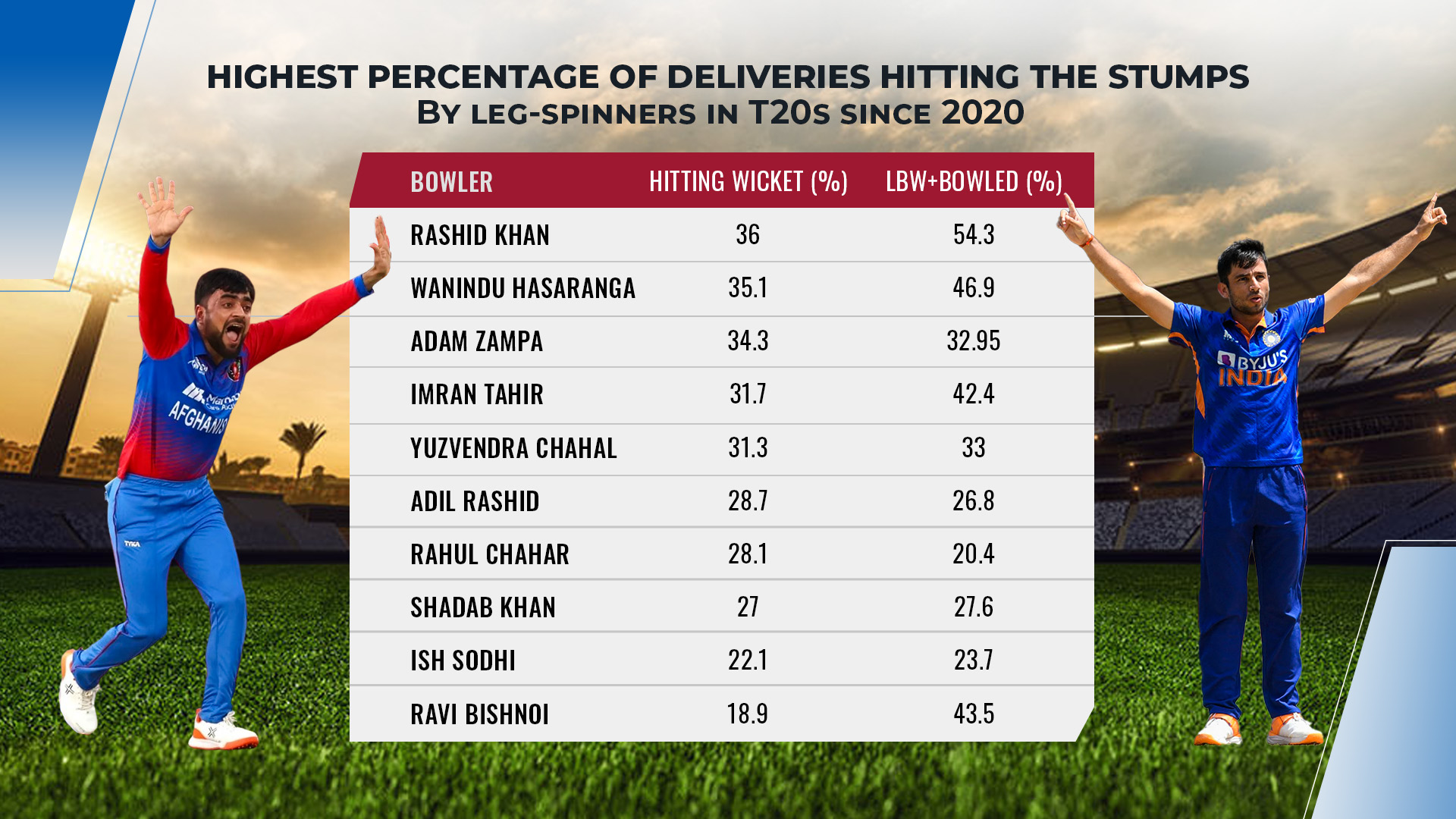 Rashid’s control is his trump card. He is the only bowler with more than 50% of wickets coming in the form of a bowled or lbw - 54.4%. That is a massive number for a bowling trait that is supposed to get the batters caught, beating them in flight.

That is what Bishnoi is missing. Only 18.9% of his deliveries hit the stumps. Remarkably though, 43.5% of his dismissals are bowled or lbws. This only shows how lethal he can be if he is attacking the stumps. For that, the 22-year old needs to control the amount of turn on his googlies.

The late Shane Warne believed in not turning the ball as much as turning it to create havoc in the batter’s mind. For a bowler like Bishnoi, who spins the ball miles, not turning a few as extravagantly would perplex the batters more. Being young, the Rajasthan born has a lot of time to improve and probably add this skillset to his repertoire.

Yuzvendra Chahal was dropped for the World Cup last year with the consensus that India are looking for a leg-spinner who is quicker through the air. Rahul Chahar is the third fastest bowler in the list above. But, Chahar hasn’t played for India since the 2021 World Cup.

Chahal and Bishnoi are the only right-arm leg break bowlers to have played for India since then. Both are at different ends of the spectrum in terms of their strengths. For Chahal, googly is the least productive ball. For Bishnoi, it is his most trusted weapon.

Chahal is most likely to be India’s spin spearhead at the World Cup in Australia. But the world will keep the doors open for this new variety of leg-spinners. And that is probably a big reason why Bishnoi is the only player to have graduated to the senior team from the batch of the 2020 U19 World Cup.

He has a long way to go to replicate Rashid’s accolades. He has only 78 T20 wickets in comparison to Rashid’s 478. He might never be in contention for the feat of 1000 T20 wickets unless the BCCI allows Indian cricketers to participate in overseas T20 leagues.

There are so many intricacies in every trait of cricket, we might have missed a few in this piece. And Bishnoi will have to hone them too in the meantime he gets his due chances. But he is still the closest thing to Rashid Khan based on his modus operandi.