The MI-CSK rivalry has been much talked about, but there has been an equally engrossing rivalry that has gained traction over the last few seasons. One way or the other, the two teams have been instrumental in putting a stop to the other’s campaign. While SRH knocked KKR out, in Play-offs in 2016, KKR avenged the same by duly knocking SRH out in 2017. With Williamson leading from the top, SRH came back stronger, to land the knock-out punch to KKR in 2018 – SRH leading 2-1 in this mini-rivalry.

The stage was all set for KKR to land back the punch. SRH, with 6 points, was No.4 on the table. All that Kartik and Co. had to do were beat the Mumbai Indians, and push the Orange Army out of contention.

But the local Boys in Blue had other plans. With the backing of not one, but two cities behind them, they came up trumps and thereby topped the table. The whole of Hyderabad erupted with joy, with the prayers from Charminar having been heard at the Gateway of India.

Although both SRH and KKR were stuck on 12 points, SRH sneaked into the last four courtesy of their better net run rate – and became the first team in the history of IPL to qualify for the playoffs with a mere 12 points.

SRH ended the league stage with the highest net run rate amongst all teams. The catalyst was the apocalyptic opening combination of David Warner and Jonny Bairstow. Their impact was so great that despite them leaving the tournament before the playoffs, SRH grabbed the last spot in the top four despite losing their last two matches. SRH’s net run rate took a huge leap in three games: SRH vs RCB, Match 11; SRH vs KKR, Match 38; SRH vs CSK, Match 33.

Flashback to match 11: SRH vs RCB. The 185-run partnership between Warner and Bairstow was the talking point of the season. Warner was coming off the back of a one-year ban whereas Bairstow was playing his maiden IPL season.

They scored at 11.41 RPO, which ensured that SRH ended with 230 at the end of their allotted 20 overs. Their destruction demoralized the RCB team; Mohammad Nabi finished off the job with figures of 4 for 11 including the wickets of Parthiv, Hetmyer, and De Villers. In the end, SRH won the match by 100 runs and their NRR received a huge boost, which provided insurance against subsequent lean times.

Warner ended the season having amassed a total of 692 runs with an S/R of 143, while his opening partner Bairstow scored 445 runs in 10 matches with an S/R of 157. They have scored 50 % of SRH’s total runs this season. Warner has been the Mr. Dependable for SRH with 9 the fifties, the most by any batsmen this season.

Some of his innings have been uncharacteristic; the reason being that their middle order didn’t perform too well. In their away game against RR, Warner scored 37 runs without hitting a single boundary. He was holding one end up to ensure that the middle order doesn’t get exposed, and once he got out the batting lineup fell like a pack of cards. Whenever their opening partnership scored below 50 runs, SRH went on to lose the match. 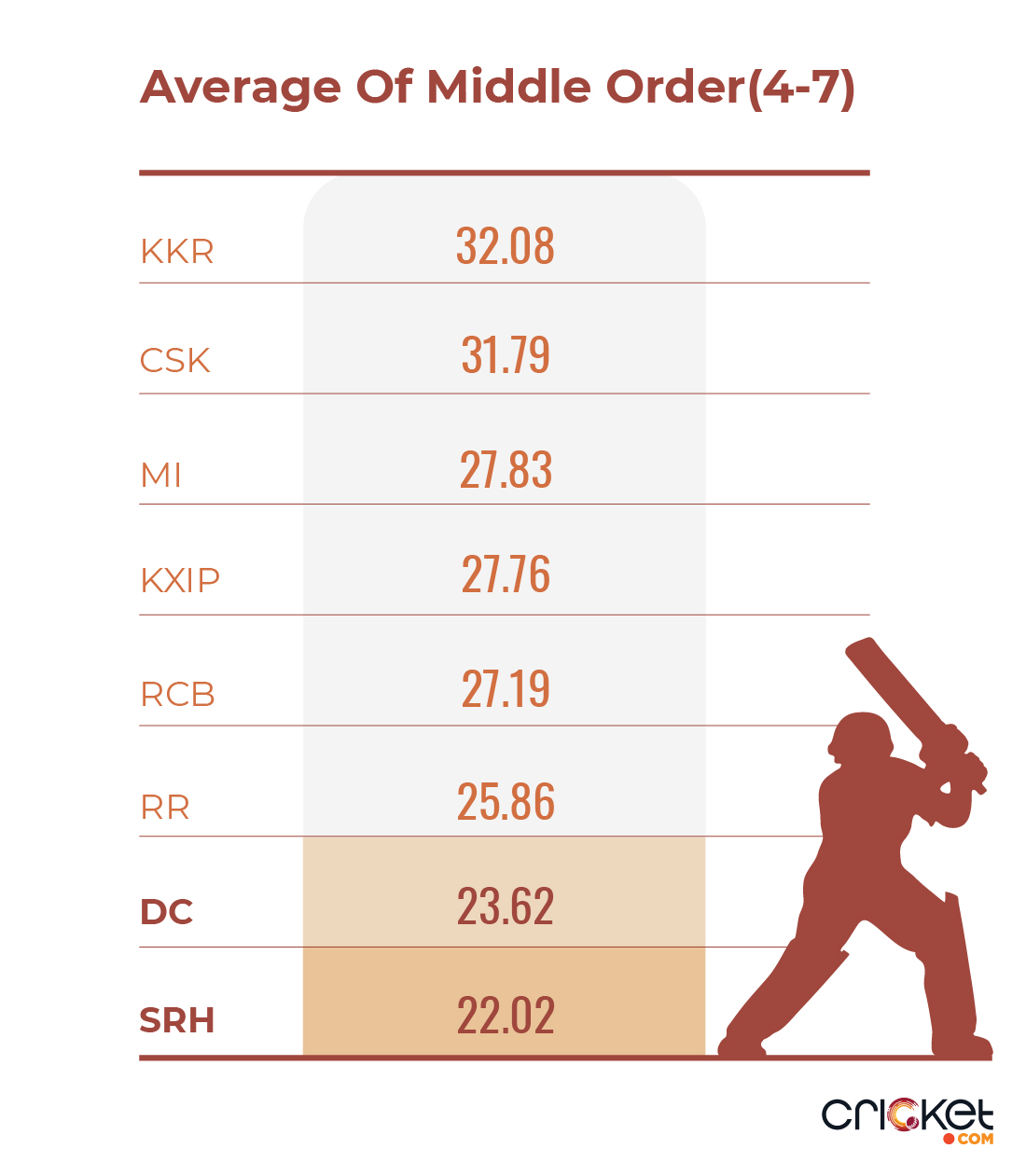 Both the teams have middle order issues to solve, but SRH has another problem: the run rate. The middle order of DC scores at 8.01 runs per over whereas SRH’s middle order score at 7.10 runs per over which make a difference of approximately 20 runs. However, with the in-form Manish Pandey, SRH will breathe a sigh of relief -- he has scored 260 runs in his last five matches with an S/R of 163.52.

For the Delhi Capitals, Shikhar Dhawan has been a revelation from the middle stages of the tournament. In the first five games, Dhawan was slow to start in the powerplays and played out a lot of dot balls, thus putting pressure on the middle order. Dhawan was batting at a poor S/R of 116 in the PPs.

His approach prompted coach Ricky Ponting to say in a press conference, “Rishabh Pant can’t do it every day, so Shikhar Dhawan needs to pace up”. Since then, Dhawan’s S/R in PPs has been around 150, with a high boundary % of 25.45.

His partner Prithvi Shaw, though, has nothing of significance in the runs column, apart from the 99 he scored against KKR. Shaw has the lowest average (17.7) after Watson among batsmen who have played a min of 150 balls in the tournament.

The problem for Shaw is seeing of the powerplay overs. He has been dismissed 10 times I PPs this season, the most for any opener. One solution could be Shreyas promoting himself at the opening slot. He had a decent tournament with an average of 44 at No3. Shaw could be demoted below the order and that can prove to be blessing in disguise for DC.

The standout factor in DC’s success was their bowling. They have picked the most number of wickets (90) in the league stage. Their S/R is second best to Chennai in both powerplays and middle overs, but the best at the death courtesy Kagiso Rabada, who has been a game changer with the ball on many occasions.

In the powerplays, he bowled tight overs and created pressure from one end, then returned in the middle phase to apply the brakes – his economy rate of 4.71 in overs 7-15 is the best among pacers who have bowled a min of 40 balls in that phase.

It was at the death that he came into his own. Delhi’s bowlers picked 37 wickets at the death, of which Rabada was responsible for 19, with his slower ball and perfect yorkers.  He conceded the least amount of boundaries (17.39) and bowled 34.7 % dot balls in the death overs, the best for any pacer in the tournament

His super over spell against KKR, when he defended 11 against the best batsman of the tournament, was mindboggling. After having been hit for a boundary in the first ball, he nailed three Yorkers, a perfect toe-crusher knocking over Andre Russell with the third. In fact, after Chris Morris, he has bowled the most number of Yorkers - 12.5 % -- at the death, the most by any pacer who has bowled a min of 100 balls. 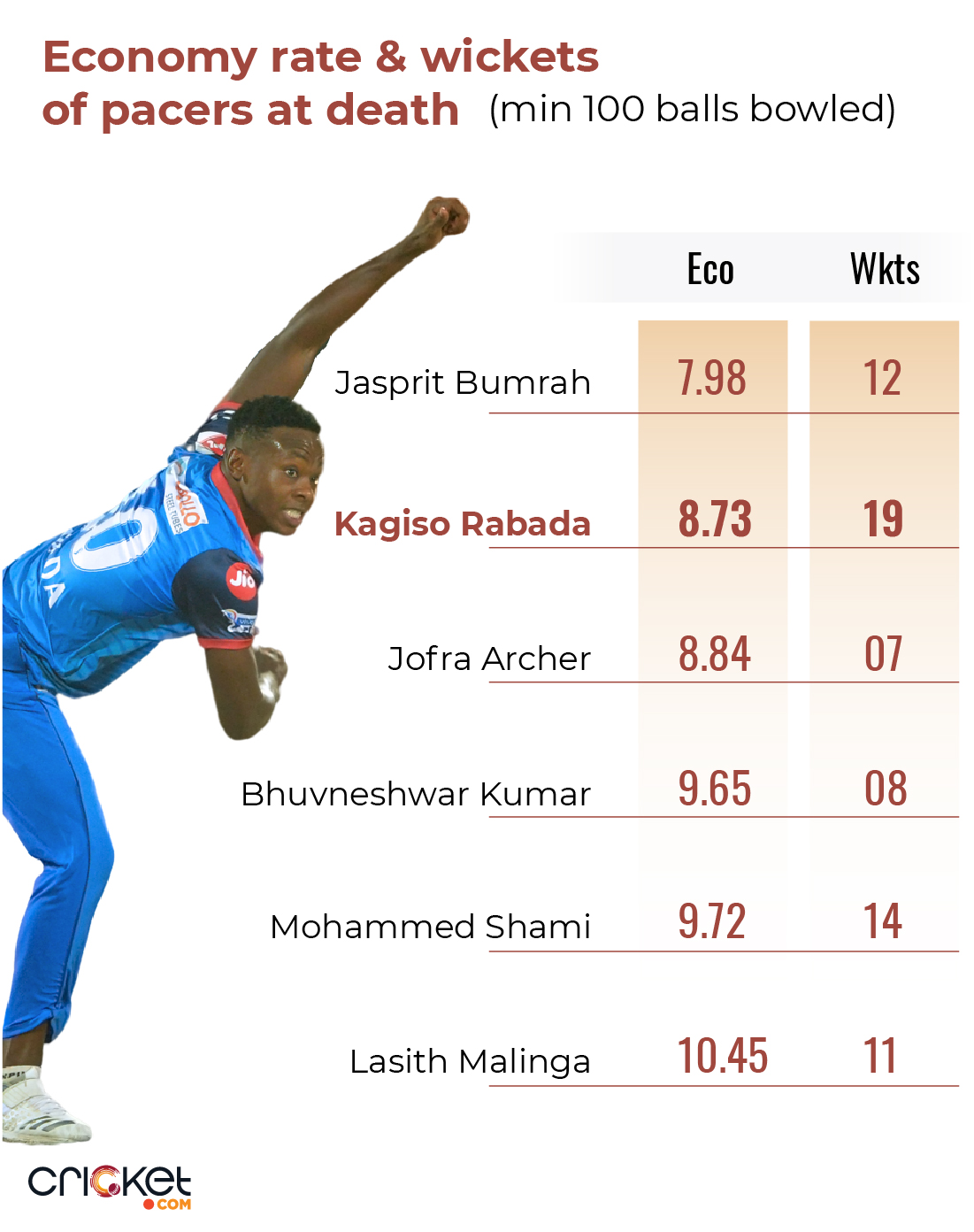 Now the question is, will Rabada’s exit proves costly for the DC?

The eliminator will be played at Visakhapatnam, where no IPL game was played since 2016. India hosted Australia for a one-off T20 where we saw a low scoring thriller. However, if you go by historical records, the pitch is likely to be good to bat on.

The pitch could well suit Rishabh Pant, who has generally struggled on the low and slow tracks of his home ground, the Kotla, but has enjoyed bating in venues like Wankhede, where he hit a fifty off 18 balls.

The main problem with him is inconsistency. In the game against Chennai, DC lost their second wicket in the form of Dhawan in the 6th over with 52 on the board. Rishabh Pant just had to create a base with Shreyas Iyer from where they could accelerate at the end. In came Imran Tahir to bowl; Pant whacked him for a boundary off the first ball and got out trying to repeat the shot with his second. Much was expected from him after a fabulous 2018 season. Apart from a few good innings though, he has been hit and miss and that has added to DC’s middle order woes this season. 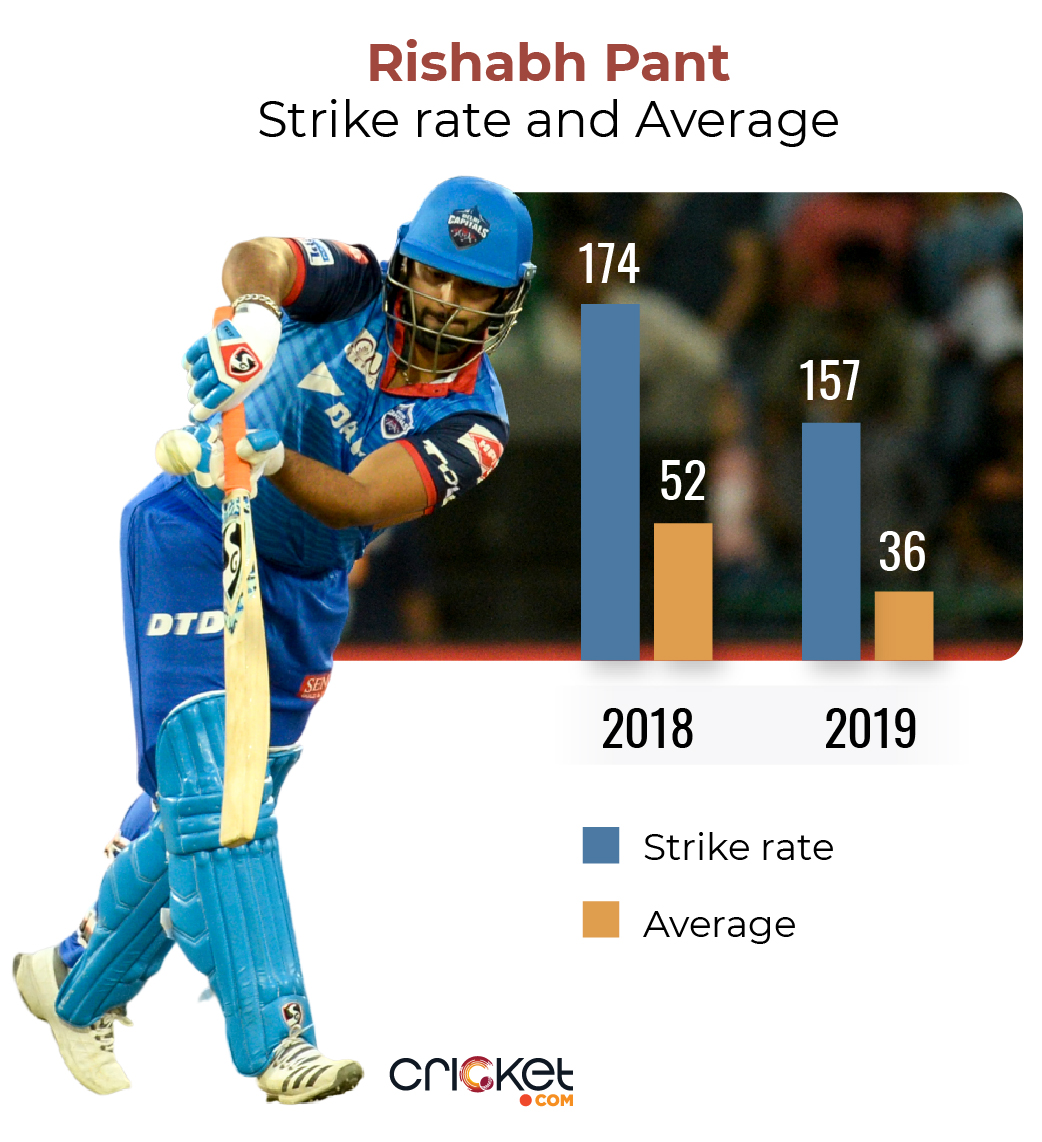 If you dig further, his average was a meager 20 between his innings of 78 in the first match of the DC campaign till he again scored a 78 against Jaipur in the 11th match of their campaign.

Can Mohammad Nabi be the game changer?

Data suggests that there is nothing much between the pacers and spinners at this ground. However, there is an appreciable pattern that suggests off-spinners have done well here. This sets up the perfect matchup between Mohammad Nabi and a Delhi Capitals lineup with four left-handers in the batting lineup. 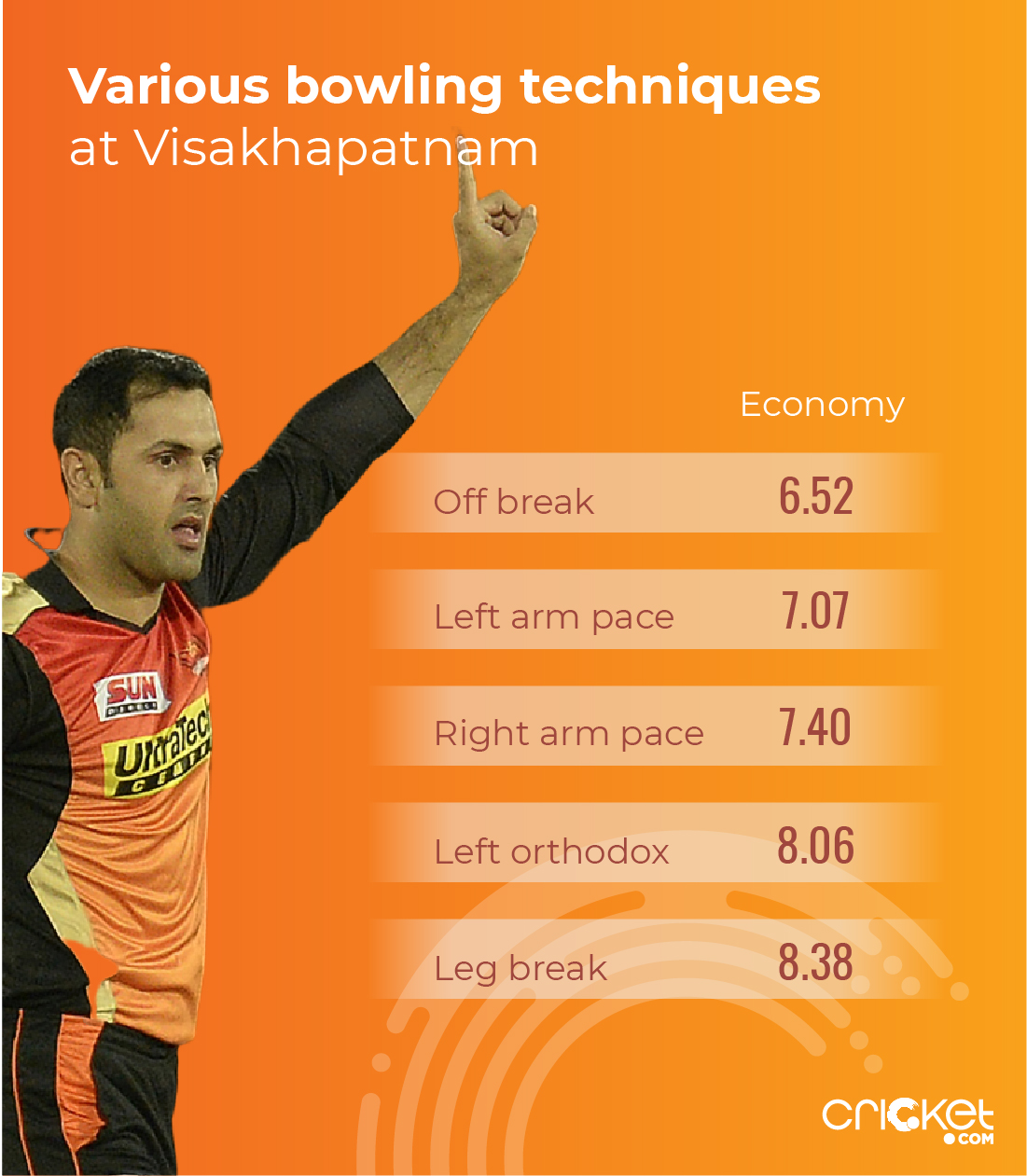