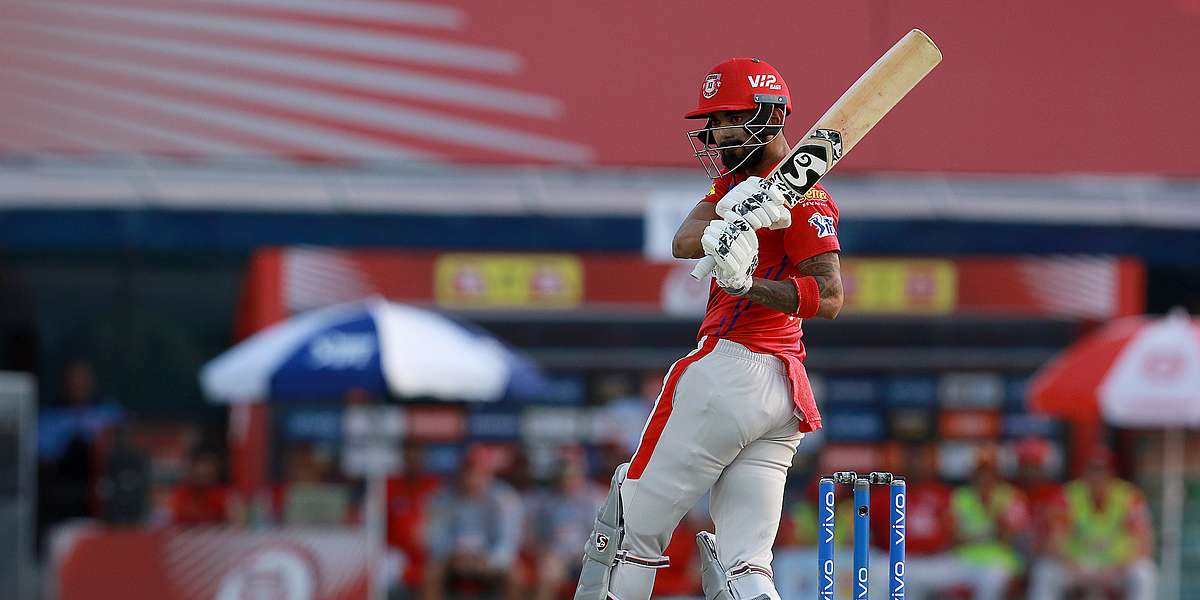 Cricket.Com Staff
Delhi Capitals vs Kings XI Punjab, IPL 2020, Match 2: Fantasy Preview
Here are a few tips and suggestions that might help you in creating your fantasy team for the second match of IPL 2020 between Delhi Capitals and Kings XI Punjab at the Dubai International Cricket Stadium

It’s fair to say that both Delhi Capitals (DC) and Kings XI Punjab (KXIP) have thus far underachieved in the Indian Premier League (IPL). After all, neither team has won the title so far and, between them, they have reached the final just once – KXIP in 2014.

In matches between the two sides, Kings XI have the advantage, having won 14 out of the 24 contests between the two teams so far. While the Capitals defeated Kings XI when the sides last met, the latter won the four games before that. 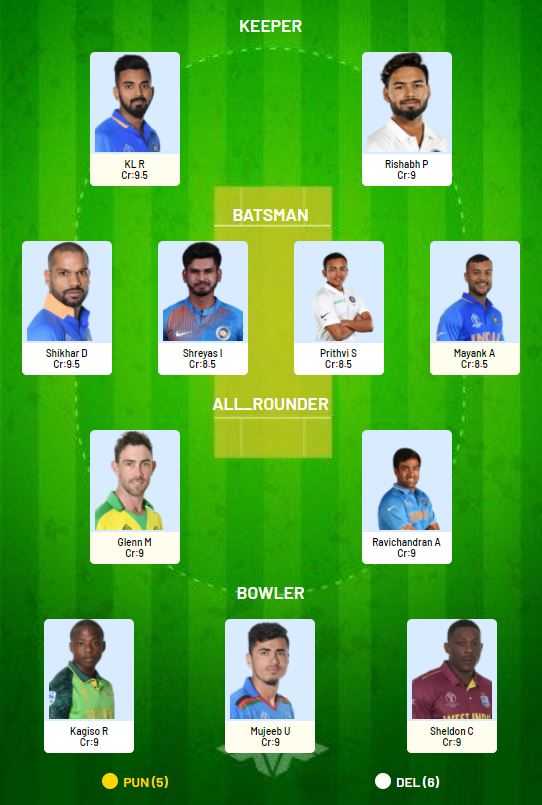 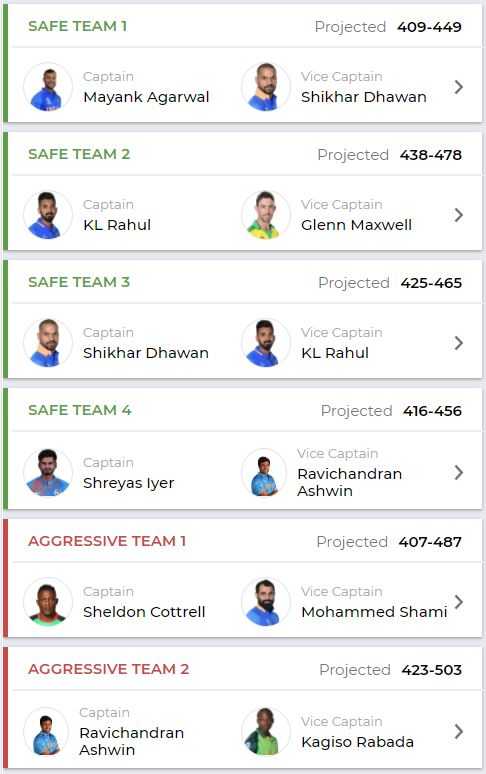 Since 2018, among the three stadiums that will host matches in the 2020 IPL, Dubai has been slightly friendlier for bowling when compared to the other two.

Wickets have fallen every 21.5 runs and every 17.4 deliveries during the aforementioned period – from a bowling viewpoint, these are the best numbers among the three stadiums.

How teams adapt to the conditions will have a big say this season as the environment is quite different to the one that they would have faced in India. Franchises would have made their teams with players who would have been beneficial on their home pitches and conditions, but that has been thrown out of the window now.

For example, since 2018 in T20 cricket, the run-rate at the Arun Jaitley Stadium (Delhi’s home) in T20 cricket has been 8.1 and at the Punjab Cricket Association IS Bindra Stadium (Punjab’s home), it has been 8.8. During the same period, the average run-rate in Dubai has been 7.4, so batting numbers might suffer this time. 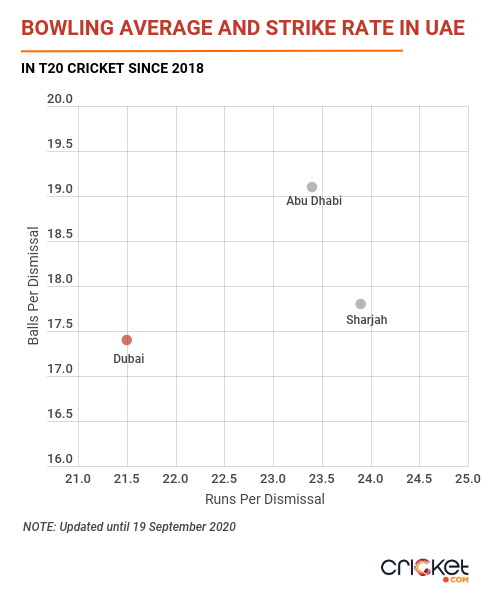 With most cricketers playing competitive cricket after a long period, it is not easy to predict what will happen in this match. No T20 match has been held at the Dubai International Stadium since November 2019.

Since 2018, at the Dubai stadium, captains winning the toss have opted to bowl first in 32 out of 51 matches. But there’s barely any difference when it comes to the final result with teams batting first winning 25 times and teams chasing winning the other 26 matches.

Spinners have been very economical here, conceding just 6.7 runs per over since 2018, but pacers have taken majority of the wickets. While fast bowlers have bowled 61.9% of the overs here during the period, they have taken 65.1% of the wickets.

The quicker bowlers also have a better strike rate in Dubai since 2018, having taken a wicket every 18 deliveries compared to a strike rate of 20.7 for the spinners. When it comes to bowling average, there is hardly a difference between pace (22.9) and spin (23).

Being the first game of the season for the two teams, it’s tough to predict the playing XIs for both as well, so wait until the toss to make your final team. If players like Chris Gayle, Glenn Maxwell etc. are part of the game, then you could look at including them. 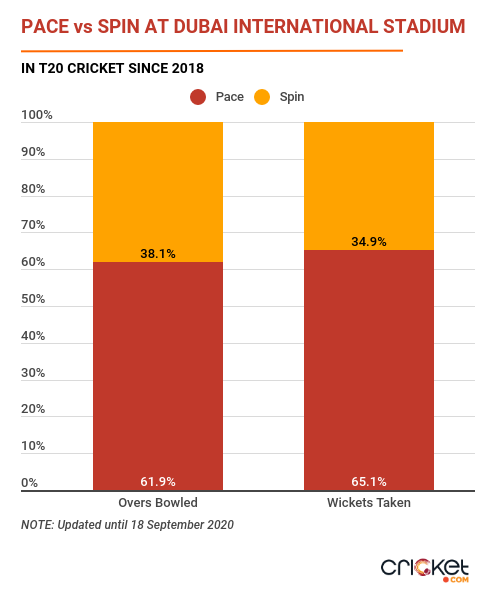 Shikhar Dhawan and Mohammed Shami have been two of India’s most prolific players in international cricket over the last few years. In this match, though, they will be up against each other – most likely at the start of Delhi’s innings. Dhawan has got the better of Shami in the past with the Amroha-born pacer yet to dismiss the left-handed opener in T20 cricket. 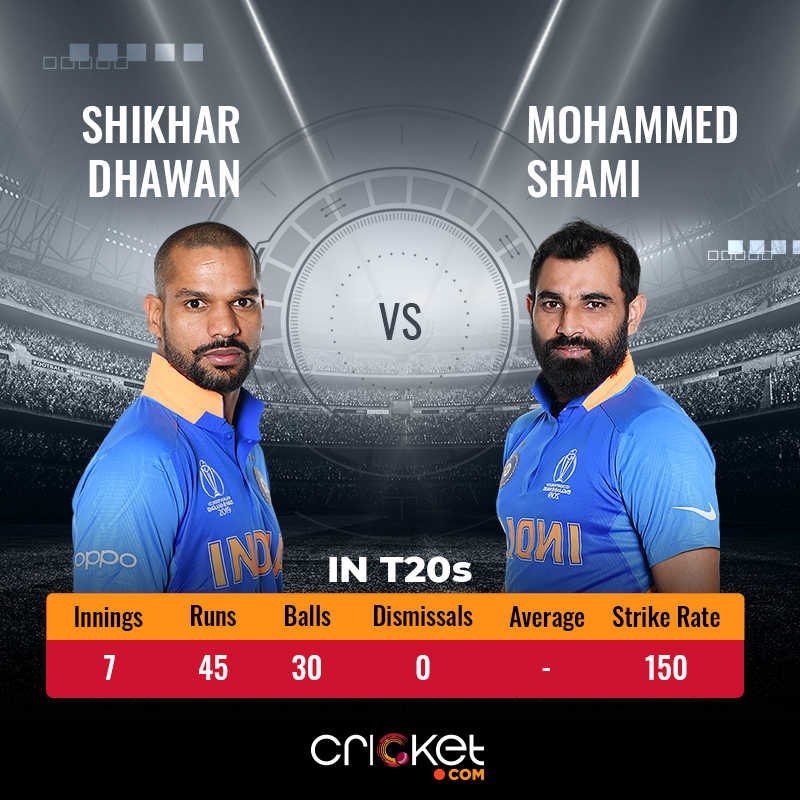 Ravichandran Ashwin dismissing Chris Gayle in the 2011 IPL final remains one of the most noteworthy moments in the tournament’s history. If Gayle does play in this game, you can expect Shreyas Iyer to throw the ball to Ashwin at the start of the innings. The Indian spinner has a superb record against Gayle who is arguably the greatest T20 batsman of all time. In T20 cricket, the West Indian opener has an average of only 16.25 and a strike rate of 82.28 against Ashwin. 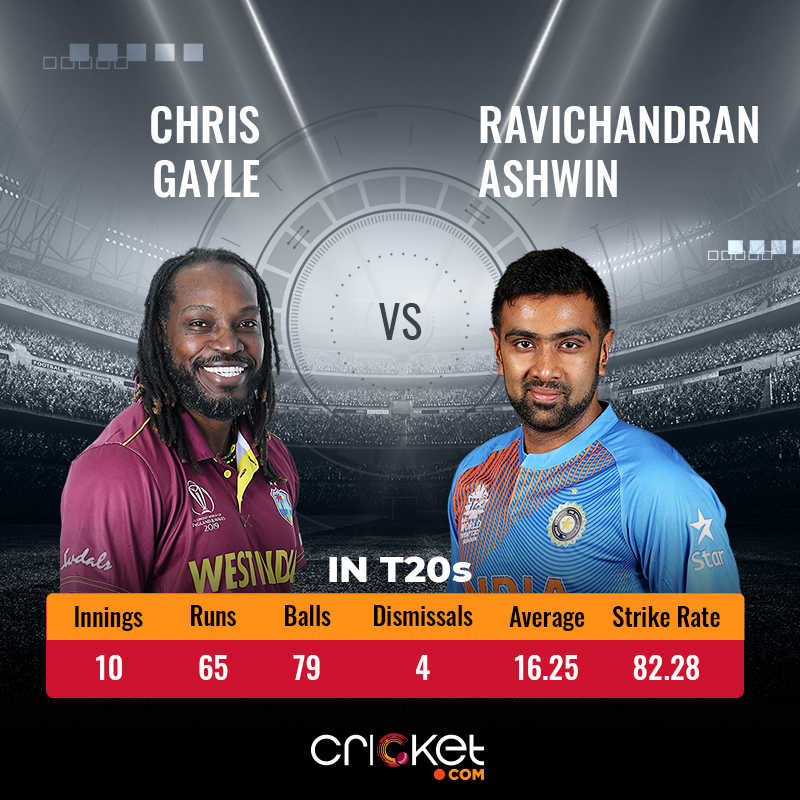 Another batsman in the Kings XI top-order against whom Ashwin has had success in T20 cricket is Mayank Agarwal. While a strike rate of 144.44 is very good, Mayank averages just 9.75 against Ashwin and has been dismissed four times in 27 balls by his Indian teammate. Since 2014, the duo have faced each other in the 20-over format just once – during the Syed Mushtaq Ali Trophy final last season when Ashwin dismissed Mayank for a golden duck. 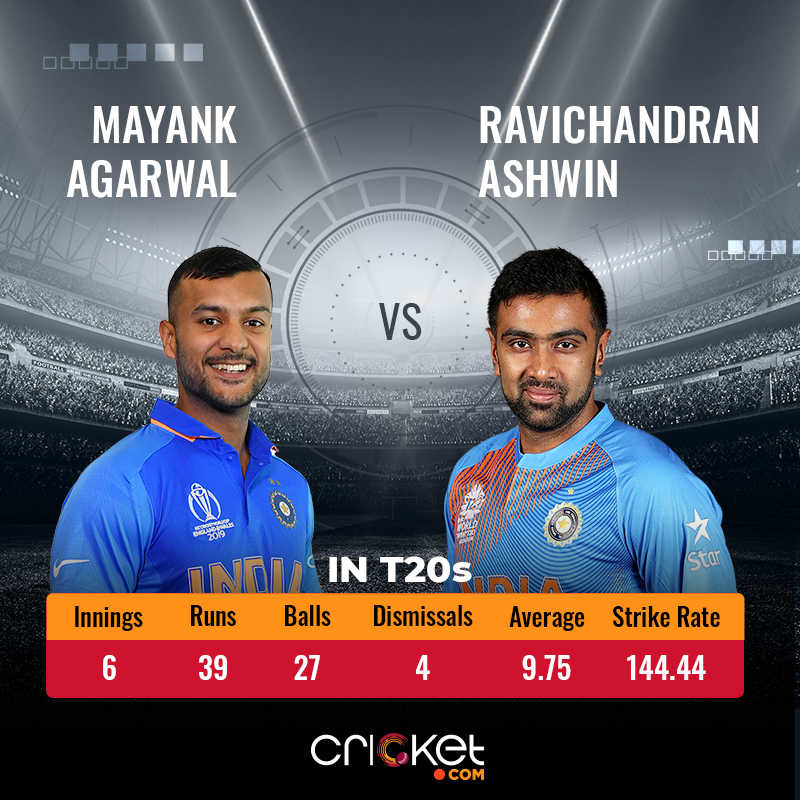 Before cricket was halted due to the pandemic, KL Rahul was enjoying the best run of his international career. He had established himself as India’s wicketkeeper in white-ball cricket. It’s been seven months since he last played competitive cricket, so it’s tough to predict if he can carry on that form. In the last two seasons of the IPL, no one has scored more runs (1252) than Rahul and the Bengaluru-born batsman has done so at an average of 54.43 and a strike rate of 146.6. 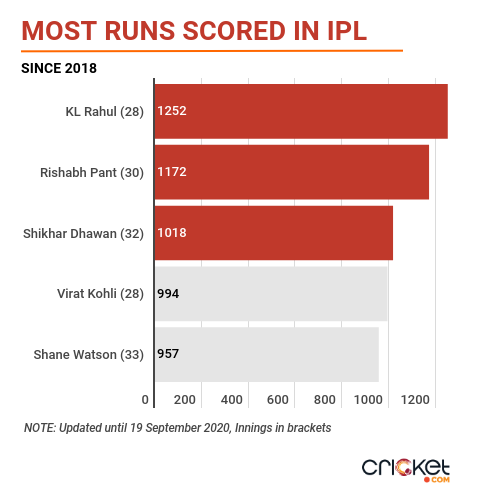 While Rahul has scored the most runs in the IPL since 2018, Shikhar Dhawan is the third-highest run-getter (1018) during the period. When it comes to deliveries faced, Dhawan (747) is second, only behind Rahul. On average, in the last two seasons, the Delhi opener has faced 23.34 deliveries per innings which is very good from a fantasy cricket perspective. Since 2017, no batsman has been involved in more 50+ partnerships than Dhawan (23). 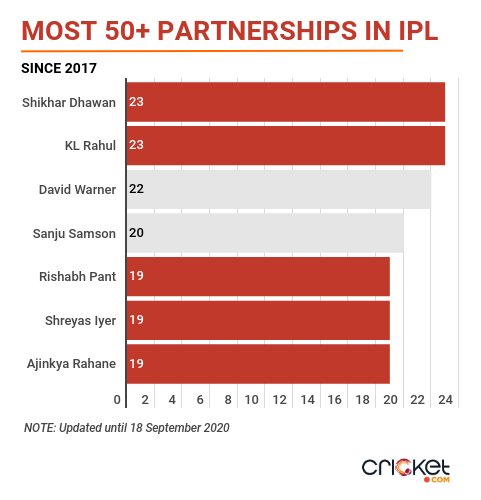 Mujeeb Ur Rahman comes into IPL 2020 in brilliant form, having finished CPL 2020 as the second-highest wicket-taker (16) in the tournament. He had an average of 13.56 and a strike rate of 15.4 during the CPL and KXIP will be hopeful that he can carry that form into the IPL. During the CPL, he enjoyed a strike rate of 12.8 against left-handed batsmen and the fact that a few of DC’s top batsmen are southpaws should only help Mujeeb.

During the 2019 IPL, Kagiso Rabada finished as the second-highest wicket-taker, having taken 25 wickets in 12 matches (Imran Tahir, who topped the charts, took 26 wickets but played in five more matches). Among bowlers who took 10+ wickets last season, Rabada had the best average (14.7) and only Khaleel Ahmed (11) had a better strike rate than him (11.28). A bowler who takes wickets with such regularity should definitely be in your consideration.