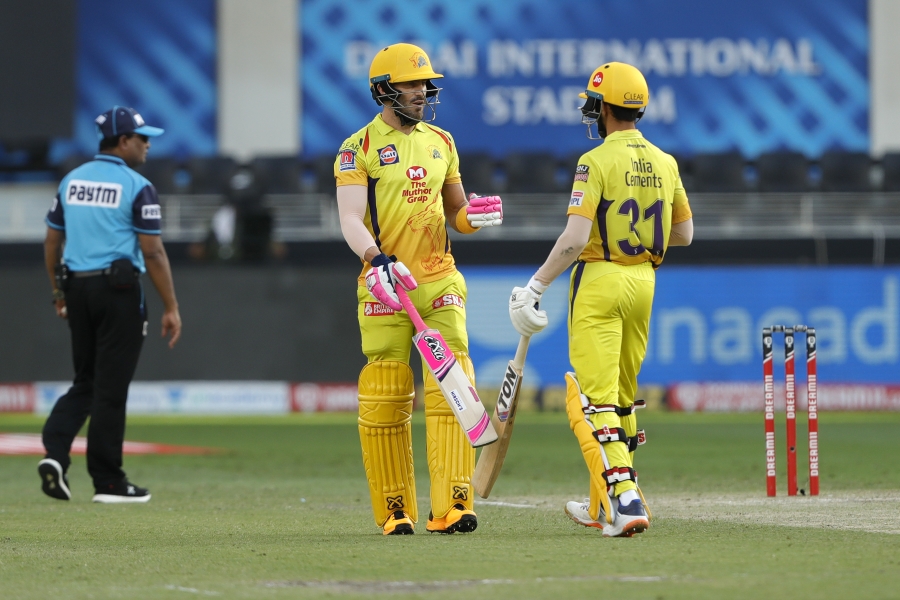 Chennai Super King's batting mainstay Faf du Plessis believes that slower conditions always bring the best out of his side and attributed their eight-wicket win over Royal Challengers Bangalore to the exploits of the spinners. CSK on Sunday restricted RCB to a modest total of 145 for 6 and then returned to overhaul the target with ease in 18.4 overs.

While the pace duo of Sam Curran (3/19) and Deepar Chahar (2/31) were among wickets, Du Plessis pointed out the contribution of the spin trio of Ravindra Jadeja (0/20), Imran Tahir (0/30) and Mitchell Santner (1/23) in the middle overs. "Obviously playing in the day, the wicket was a little bit slower. We have seen that slower conditions brings out the best of the resources that we have in our team," Du Plesis said at the post-match press conference.

"We played three really good spinners today and they bowled well against a strong RCB batting line-up. To restrict them to a total that we did was really a good effort from our spin bowlers specially."

CSK bowled well at the death, taking four wickets for just 20 runs in the last three overs. "Also we were very good at the end today. I think our margin of error was little bigger than a normal wicket because of the slowness of the surface. Deepak and the guys bowled really well today to restrict RCB to a modest total."

Asked about the inclusion of Santner in the team, Du Plessis said: "Josh (Hazlewood) hurt his ankle in the previous game, so it was more of a forced change to bring in Santner. He is a quality international spinner, he knows what he is doing, he is very accurate."

The former South African skipper also praised young opener Ruturaj Gaikwad, who finally came good with an unbeaten 51-ball 65. "It is really important for someone like Ruturaj especially, they are getting opportunities now, which is the future probably of a team like Chennai," he said.

"Really pleased that he got some runs today, heard a lot of good things about him as a player, obviously the confidence that you get when you get those runs is the best part of it. So hopefully today is a start of a great career for him in CSK."

Du Plessis said the last two games will be an opportunity to give chances to new players to build on for the next season. "Obviously the performance has not been to the standard that CSK is used to but the management has been really calm and positive. CSK's brain trust will start looking at new players who are the future of the team, to start building with.

"So the last few games will be exactly that, making sure that you look ahead and build from these two games to next season."

Mike Hesson, RCB's Director of Cricket, was disappointed to see the lack of execution from his team, especially the bowlers. "We felt we had a score on board to potentially defend if we bowled and fielded well, which we didn't. From a batting side, we struggled to up the ante, it was tough work and CSK spinners bowled nicely through the middle and we struggled to put the foot down," he said.

"And then with the bowl, we didn't execute in terms of length anywhere near to where we have been, so from execution point of view it was a bit disappointing."

Hesson said it was an off-day for his bowling unit, which had restricted Kolkata Knight Riders to a paltry 84 for 8 in their last game. "It was an off day, I think with the ball we have been consistent throughout. Obviously the ball swung in Abu Dhabi, so it was quite different skill set required. Today we needed to be more patient, bowl some cutters, we just didn't hit our lengths," he said.

"To be fair, Gaikwad and Faf got off to a flyer and Gaikwad played nicely."

NEWS
Young South Africa pacers could learn a lot watching Shami: Du Plessis
What Du Plessis found fascinating was the intensity with which Shami bowled on the fifth day