After a few hiccups in the World Cup, England have found their mojo back with Jason Roy and Jonny Bairstow’s lethal opening combination back together and dictating terms from the onset. After winning the toss, England skipper, Eoin Morgan had no hesitation to bat first on a flat deck. When Sri Lanka and West Indies played against each other at the same venue, over 650 runs were scored.

When you see Roy batting there is a similarity to the way Virender Sehwag used to bat, the way he approaches the innings, getting on top of the bowlers, a near-perfect hand-eye co-ordination makes him a destructive opener. His aggressive approach allows Jonny Bairstow to settle down.

England have never lost a match in this World Cup when either of the two have scored more than 50+. A clear testament to their value as a pair; England have lost three matches in this World Cup so far and on two of those occasions England didn’t have the luxury of the Bairstow-Roy combination and once Roy was dismissed below 10 against Pakistan.

Roy and Bairstow dent the confidence of bowlers and we saw a clear statement of it against India. The duo started with the same approach against the Kiwis tormenting the bowlers in the first Powerplay and brought up England’s 50 inside seven overs. With no assistance from the pitch, the bowlers looked hapless.

New Zealand didn’t have the services of Lockie Ferguson who has bowled with fire and aggression. He’s taken 12 wickets between overs 11-40 in this World Cup so far, the most by any bowler. The Kiwis were forced to play Tim Southee as his replacement. Southee was playing his first match of the tournament and looked out of rhythm.

The partnership flourished from 50 to 100 inside 15 overs and from then for New Zealand, it was about hanging in and hoping for a wicket rather than creating opportunities for it. Roy was finally dismissed by James Neesham after he failed to keep a cover drive down and handed a simple catch to Mitchell Santner.

Roy’s wicket made Bairstow return to second gear but his scoring rate was always above 6. The incoming Joe Root did what he does best; play the anchor’s role and allow batsmen at the other end to play their strokes. In the process, Bairstow reached his second ton of the tournament in 95 balls.
Bairstow favoured the leg side scoring 41% of his runs. He played the pull shot to good effect but was equally lethal with his cover drives.

Similar to the India game he couldn’t get going after his century and was clean bowled while trying to play an extravagant shot off the bowling of Neesham. Jos Buttler was promoted to number 4 but he too couldn’t get going after he misjudged and tried to play a cover drive to a knuckle ball that held up a bit in the pitch. Then the collapse started, Stokes, Morgan, Woakes went in quick succession. But cameos from Adil Rashid and Liam Plunkett ensured England reached the psychological 300-run mark.

New Zealand struggled to chase 245 against Australia and 306 was looking herculean given they largely depend on Kane Williamson and Ross Taylor to do the bulk of the scoring. Martin Guptill’s new partner, Henry Nicholls was out for a first ball duck. He had a discussion with Guptill but decided to refrain from challenging the umpire’s decision. A dejected Nicholls saw the ball going over the stumps but it was too late.

Guptill found Jofra Archer’s pace too hot to handle. Guptill was trying to take on a short ball on leg stump but only managed to get a glove and the rest was done by Jos Buttler behind the stumps.

When it’s not your day you find strange ways to get out and Captain Kane was the victim of it. Ross Taylor hit a straight drive that touched Mark Wood’s palm and went on to hit the stumps at the non-striker’s end. The unfortunate Williamson was caught short.

With his wicket New Zealand’s hopes were diminished and Taylor’s run out made it impossible. Tom Latham showed some fight but all in vain as New Zealand were too far from the target. They lacked power hitters in the crease who could shift the momentum into England’s favour.

With no option left, the Kiwis went for the sensible option, playing for the run rate and losing to badly. The tail-enders hung in there and ensured that New Zealand lost the match by 119 runs which could have been very worse at one point.

Needing to win to make it to the semis, England put in a comprehensive performance against a poor New Zealand side. By virtue of their win, England confirmed their spot in the semis while their opponents on the day – too are through to the last four barring a miracle from Pakistan against Bangladesh. 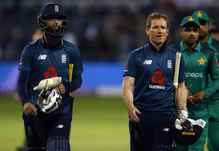