England will need to turn up with a spirited batting performance

Last week, England’s seemingly sure-shot race to the semis went off the rails with two consecutive defeats.  Last time they suffered two successive defeats was more than two years ago, in January 2017, in a bilateral series against India. And it is against India that England has to turn out on Sunday June 30, to save its World Cup campaign.

England’s plight is a classic example of how in sport, the biggest strength can also be the biggest weakness. Its deep batting lineup, studded with aggressive batsmen all the way down to number eleven, and reputed to be able to chase down any score, failed thrice chasing: 348 against Pakistan, 233 against Sri Lanka and 285 against Australia. And suddenly, what seemed a minor chink in the batting armour – the injury to Jason Roy – has widened and deepened into a chasm rival teams are looking to exploit.

James Vince, Roy’s replacement, has failed to come good, losing his wicket within the first 10 overs in each of the three games he has played. Not coincidentally, England’s run rate in the first powerplay has gone from 6.3, when Roy opened with Jonny Bairstow, down to 4.1 in the games Roy has not played. The importance of this is underlined by the fact that England has not won a game when they have lost more than one wicket in the first 10 overs.

The weakness at the top, which piles pressure onto the middle order, is a weakness India is ideally poised to exploit. The Indian bowlers have picked 43 wickets in their seven Cup games. They may be only fifth in the tally of most wickets taken, but that is in part because India has played one game less than the other sides. Statistically, India has the best bowling average and strike-rate of all teams, highlighting the quality of its bowling unit.

The injury to Bhuvaneshwar Kumar has proved a blessing in disguise. Mohammed Shami, the replacement, has in the two games he has played proved to be India’s most difficult bowler to face with the new ball, averaging only 7 runs per wicket for his three wickets, the most by an Indian bowler in the first powerplay. This should come as no surprise -- Shami has been amongst the best in the first phase of the innings in 2019. The graph below indicates the threat Shami possess to England’s top order.

England, which began its innings in disastrous fashion against Australia, will need to be more cautious against Shami and Jasprit Bumrah in the opening passages, and hope to make up against the spinners Kuldeep Yadav and Yuzvendra Chahal, and fifth bowler Hardik Pandya, who with an economy rate of 5.69 is India’s most expensive bowler in this tournament.

Playing spinners won’t be easy, though, on the sticky Edgbaston track where New Zealand’s Mitchell Santner spun the ball square against Pakistan on June 26, and even Kane Williamson managed to get square turn. The English batsmen have a run-rate of 6.48 per over against spin, the best by any side in the tournament, and a batting average of 67.1 runs per wicket against this type of bowling. And that sets the game up: India’s quality spinners on a turning track against the best batting side against spin in this tournament.

Fielding restrictions, number of balls used in a game, par scores - a lot has changed in ODI cricket between the two World Cups hosted by England in 1999 and 2019, but good length deliveries yielding results has remained a constant.

In the two games played at Edgbaston thus far, openers average only 19.14 at a dismissal rate of 27.4 – both being the lowest for all venues that have hosted at least two games in this World Cup. Quick bowlers have all the six wickets to fall in the powerplays at this venue, and five of them have come off balls that brought the batsmen onto the front foot.

It’s not a happy stat for the openers of both sides - Rohit Sharma, KL Rahul, Jonny Bairstow, James Vince have all struggled to counter the length. 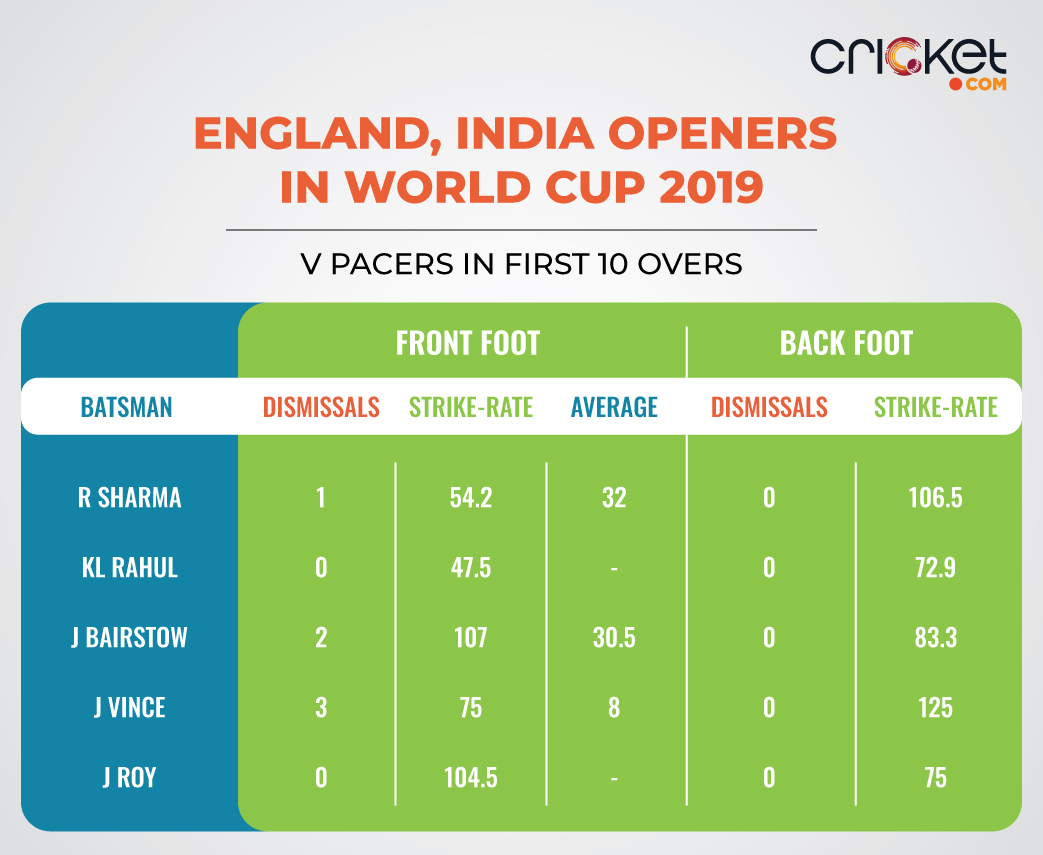 While openers have come under pressure in Edgbaston, the number 3s boast an average of 135.5. Kane Williamson and Babar Azam have scored match-winning hundreds here batting at that number, and Virat Kohli for India and Joe Root for England are eminently capable of emulating those feats.

Kohli has been having a great World Cup, without any spectacular individual achievement to show. Each of his four consecutive fifties has played a crucial role in India’s unbeaten run in the tournament. He has not scored a big hundred like Rohit Sharma has, but the fluency of his batting is a testimony of the form he is in.

In the opposition camp, Joe Root will be absolutely critical for England’s fortunes in Edgbaston as he was in their 2-1 ODI series win against the Men in Blue last year. The right-hander scored back to back hundreds back then, handling India’s wrist-spinners, Chahal and Kuldeep, with utmost ease. He is, in fact, the most influential batsman against spin in England’s current squad, averaging 81.84 against spin and, significantly, 100.83 against wrist spinners since the 2015 World Cup. Besides, Root also averages 69 against Bhuvneshwar Kumar and 46 against Mohammad Shami.

His strike-rate might be lesser than the other batsmen in the England lineup, but if Root takes root then he becomes the pivot, neutralising India’s spin attack and allowing the other batsmen to play freely around him.

The England management has shown its belief in the struggling James VInce and will continue to open with him until Jason Roy regains full fitness. Chances of Liam Plunkett’s return to the XI looks bleak, given that the Edgbaston track has witnessed grip and turn for the spinners.

The only question mark in the Indian camp is regarding the number 4 spot. Vijay Shankar has failed to grab his opportunity; Dinesh Karthik and Rishabh Pant are waiting for their chances. For now, there is no clear indication whether India will give Shankar another go, or make the change in a crucial game.